#12 by mikeh
Thanks, Huck. So Germany's references to divination with cards started around the same time as France's, which may reflect either what was allowed to be said in print or what there was to say.

Added later: Casanova allegedly, and probably, wrote his memoirs 1789-1794. So 1863 is not secure, in fact seems to me just as likely to be fiction.
mikeh
mikeh

#14 by Tarot_John
Hey Mike! Long time no see. I've been reading through your new thread with great interest. Think you might be on to something... =) 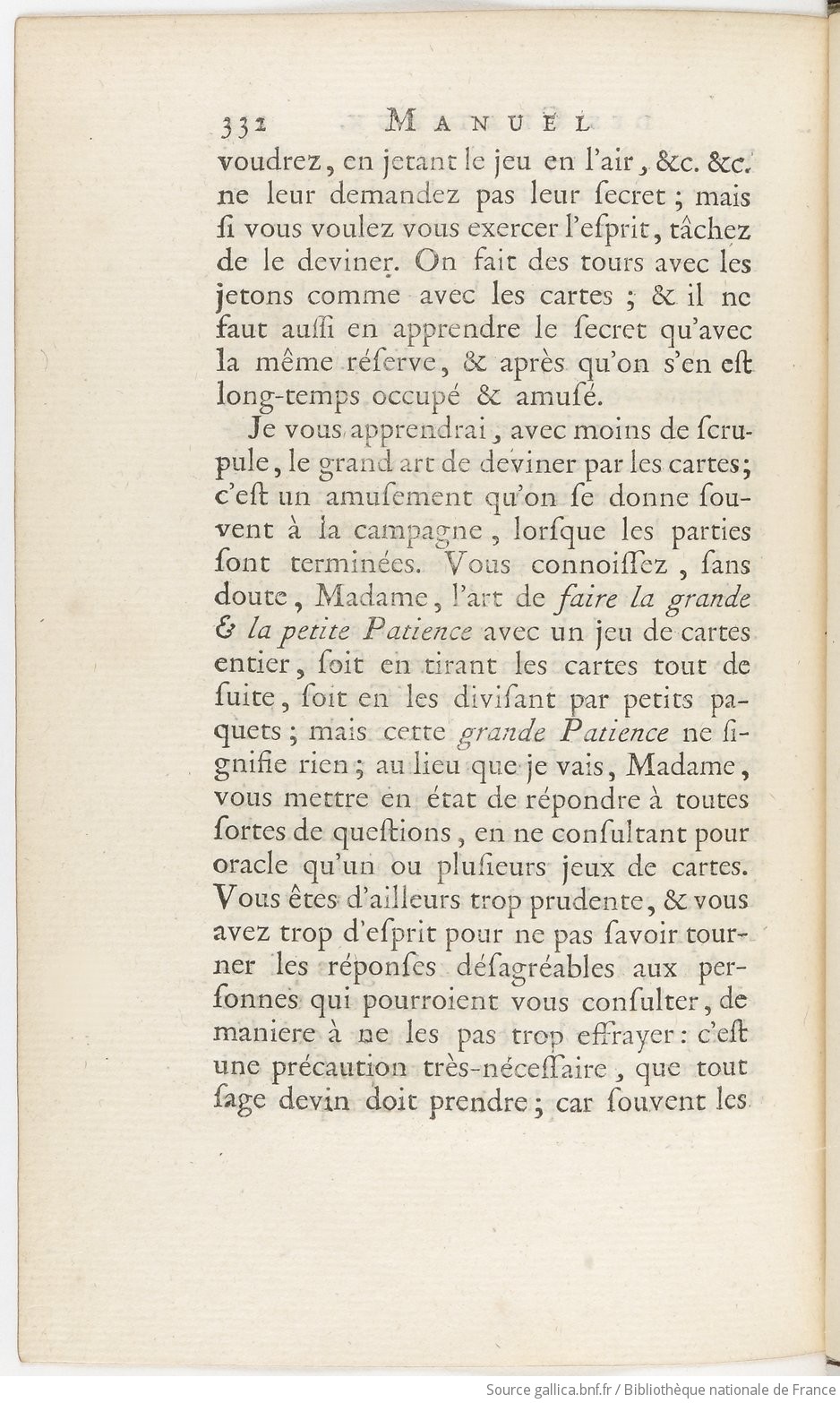 #15 by Ross G. R. Caldwell
Hi John, for getting the group of dcuments on Gallica, use the "i" (information) icon at the top of the left margin menu. At the bottom there should be a line that says "See all documents from the same set." This takes you to all their volumes of Mélanges tirés d'une grande bibliothèque, five pages worth.

#16 by Tarot_John
Thanks Ross! I'll add that to my list of tricks for browsing Gallica. I'm sure the site has all sorts of bells and whistles I've not yet encountered. I've managed to stay afloat so far simply because I'm stubborn enough to go through every single one of the thousands of search results to find what I'm looking for. But it's nice to know there's an easier way... =)

#17 by Ross G. R. Caldwell
I don't think I know all the hacks yet, either. i've been using Gallica since it came online, maybe 2002-3 or so. It was the best thing online at the time, and still is one of the best. So many books I wish were in the BnF instead of other European libraries (or Russia, in the case of Sacco Semideus we're discussing on another thread).

#18 by mikeh
Thanks for the tips, John and Ross. I'll try to remember them. Here is my summary: I would appreciate knowing if I missed anything.

#19 by Huck
From my recent studies to early cartomancy I got the impression, that there was in the early time possibly more "cartomancy of humble value" in countries with protestantic background. The appearances are too rare to say, that this is a fixed statistical value, but Dutch, English and German sources seem to be easier to find.
Especially strange is, that the two early German sources (1747, poet with a Dutch name) and 1763 (about Dutch and German ladies) give the impression, that something entered from the Netherland region.
Huck
http://trionfi.com

#20 by Ross G. R. Caldwell
Surely the impression that there was more humble cartomancy in Protestant countries is due to the fact that the press was more free in those countries. Anybody could publish anything much of the time in Germany and the Netherlands, and the UK (but there is not much evidence there...).

The Spanish Inquisition records show that humble cartomancy was known in Catholic countries. But these witches - diviners and spell-casters - were often illiterate. And of course the press was heavily censored. In Italy, the Inquisition records for Bologna and Milan were destroyed deliberately in the 18th century. I think in Venice more was preserved.