#41 by Ross G. R. Caldwell
The Denver Art Museum owns the cassone, and they attribute it to Girolamo da Cremona. There is no more detailed analysis of the image that I can find in their bibliography, it seems to be merely a history of former owners and catalogue entries.

Here is a better capture: 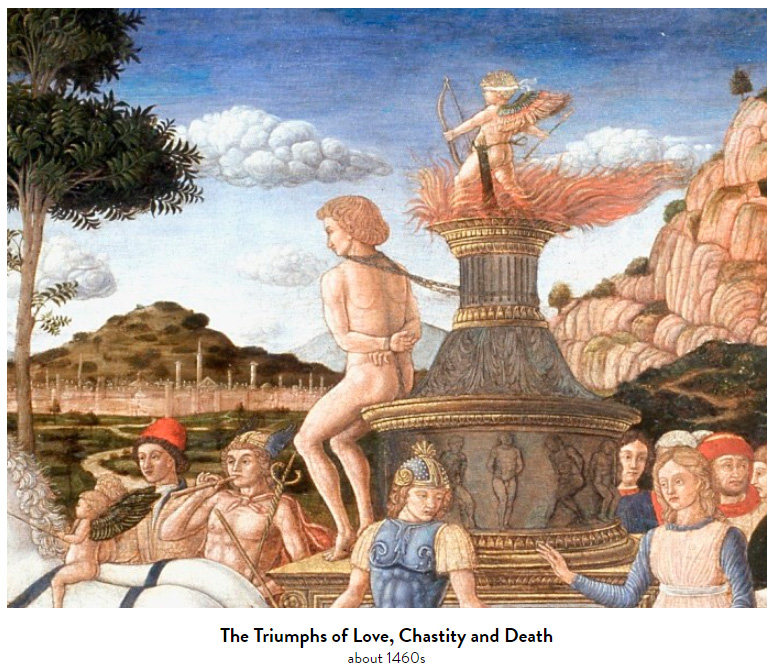 I have no reason to identify the nude figure as Samson, except that it would typically be him. It is not clear that anything has been done to his hair, although he looks a little sparse on top, but not enough to claim a clipping.

Ross G. R. Caldwell wrote: ↑
06 Jul 2019, 13:25
The Denver Art Museum owns the cassone, and they attribute it to Girolamo da Cremona. There is no more detailed analysis of the image that I can find in their bibliography, it seems to be merely a history of former owners and catalogue entries

Yeah, I was unsatisfied with "school of Mantegna" and looked up the painter as well and found this: "Girolamo first appears working alongside Taddeo Crivelli and other artists in Ferrara on the magnificent Bible of Borso d'Este, which was executed between 1455 and 1461. His art is most closely related to the Mantuan court painter Andrea Mantegna, who in 1461 seems to have recommended him to complete a missal for Barbara of Brandenburg, the wife of one of Mantegna's patrons, Ludovico Gonzaga, Marquis of Mantua. Around 1468, Girolamo began illuminating choir books in Siena, a project on which he collaborated with Liberale da Verona. He also worked in Florence for a time before ending his career in Venice. By the 1470s, Venice had become a major center of the new technology of printing, and Girolamo worked there, primarily illuminating frontispieces for deluxe versions of early printed books, called incunabules. These miniatures are known for their playful and extravagant trompe-l'oeil conceits." Not sure what that leaves us with other than "school of Mantegna" after all.

Again, I was not denying influences between Mantua (Mantegna's home) and Florence (one of the works could have influences the other) and the only additional relevant info provided here is Girolamo - if the attribution is correct - also worked in Baldini's hometown (I think the two engravings share a compositional similarity - the Girolamo being an abbreviated version of the Baldini [or Baldini an elaborate version of Girolamo - the dating is vague for either piece], focusing on Cupid's acts and parents: rivalry with Apollo and his parents Mars/Venus; Mercury merely seems to be present in his herald role). And the halo/beard-vs-shaven was a tangent driven firstly by the odd disk shape and the placement of the terrain feature "on" the head like a halo, and secondly, by the German engraving comparable (an extreme youth with a symbol of the cross). But again, my primary interest is in the planetary gods theory - whether the love-attacked subject is with or without a halo (and without makes much more sense - conceding that point). At all events, the bound figure is supposed to be edifying figure from a Christian's perspective, within the context of Petrarch. As for Girolamo's bound victim - judging by the triumphal reliefs on Cupid's plinth, showing similarly generic bound individuals, it does seem a mere "everyman" is indicated in the flesh on the cart:


My tying of the Baldini figures to the planets begins with the almost exact reverse of the PMB "time"/Saturn figure (and Baldini's own triumph of the planets/children engraving cycle), but the Girolamo cassone proves without a shadow of the doubt that at least a classical god who is also a planetary god, Mercury, is depicted in the forward group of figures beneath Cupid, opening up the question as to whether the others are not also gods present in that group (and thus the two works merit comparison, especially with a figure in each, identified as Apollo by me and based on Petrarch, calling/gesturing up to Cupid). Mercury with the "Mantegna tarocchi" Mercurio:


The Mars in Mantegna's much larger Parnassus painting has similar antica armor as Girolamo's Mars, and even his son Cupid is by his side (versus above him, but of course Girolamo is not depicting a triumph of Mars, but of Love):


Ultimately it seems to me the Girolamo cassone scene is not planetary in its emphasis (just that all of the gods depicted can double as planets, yet the moon and Saturn are missing), but is instead a learned commentary on Cupid's mythology (typical of Mantegna's allegories): red-clothed Apollo is up front by the horses, which of course he is associated with, gesturing up to Cupid who has cursed him with an unquenchable love for Daphne (a figure dear to Petrarch), while below Cupid his father Mars looks and gestures with a hand down at Venus's vulva, which she in turn touches, or rather, almost hides in the manner of Eve, even though Venus is fully clothed. The entire painting thus has the hallmarks of an interpretatio christiana of classical mythology, where the classical connotations of the madness of Love is associated with the taint of Original Sin....and in the train of Venus (Genetrix) are stock examples of contemporary males - tainted progeny. There is no other female in this scene. Like the Venus with radiating vulva on the birthtray, here it is only men being driven mad by the goddess of love, albeit the action is being carried out by her son Cupid, but of course they work in tandem.

Mantegna has no work of the planets that I'm familiar with; Baldini does; hence the broadening of classical subject matter in the latter's work with the planetary inflection (paralleled in the contemporary "Mantagna Tarocchi", where the classical gods appear in the planetary order followed by the fixed stars, albeit Apollo appears a second time to cap the series of the 9 muses).

#43 by Ross G. R. Caldwell
Excellent observation, that the plinth shows everyman in various, bound and tormented, poses. I was already persuaded of the everyman interpretation, but that seals it.

Not, however, for the engravings. The shorn hair marks him as Samson, even without Delilah.

Ross G. R. Caldwell wrote: ↑
07 Jul 2019, 13:24
Excellent observation, that the plinth shows everyman in various, bound and tormented, poses. I was already persuaded of the everyman interpretation, but that seals it.

Not, however, for the engravings. The shorn hair marks him as Samson, even without Delilah.

Again, my emphasis is not on the bound figure - at all events it would be a stock figure tormented by love, whether a historical exemplar or an everyman, the admonitory message of the wiles of Love is the same. As for the engraving, if the planets are represented - exerting their own influences on the bound figure, even as they are themselves subject to the whims of Love - I'm of the opinion that it wouldn't matter if it is Samson or not (the planetary influences always existed for humanity, Biblical through Classical periods through "today"); Samson's main meaning is that even a strong hero falls prey to Love. My only caveat is Samson was a fairly common figure in Triumphs of Love - thus in copybooks for such - and that tonsured hair detail might have simply been retained from said copybook for a bound captive, even if the captive was meant to be generic.

But again, the bound captive is not central to my interest, which is the surrounding figures of the bound captive, all on the left side of the vertical axis formed by Cupid (those in his train to the right are undistinguished "everymen"). Top left and clockwise of the engraving:
Saturn: The figure identified to time/Saturn has a clear iconographic to the PMB comparable (with hourglass),
Moon: the "bicorne" hennin hat speaks to the shape of the crescent moon associated with Luna (the PMB moon in fact holds a crescent moon).
[bound captive - originally labeled by me below as "Venus or captive?" - not a planetary deity]
Cupid/Venus: the Girolamo cassone panel shows both depicted, but of course there are numerous examples where one or the other could be shown (and the birthtray I posted places the emphasis on Venus, but clearly in Petrarchan triumphs the focus in on her son)
Apollo: uniquely cuffs a hand to his mouth as he calls up to Cupid and is paralleled in the Girolamo cassone where an entirely red-clad figure gestures up to Cupid; to reiterate my explanation for the rationale for that gesture: Petrarch's Triumph of Love appropriately provides the key here for why that is happening: l biondo Apollo / che solea disprezzar l'etate e l'arco / che gli diede in Tessaglia poi tal crollo - “…the blond Apollo, / who once scorned the youthful bow / That dealt him such a wound in Thessaly”, referring to Ovid's story of Daphne, where Cupid repaid a taunt of Apollo by inflicting an insane lust in Apollo for Daphne).
Jupiter: almost as venerable in age as Saturn, is also depicted bearded and in "Greek"/Byzantine garb, but in keeping with his station as the king of the gods, is shown in the most elaborate dress of all.
Mars: the figure identified as Mars less convincing since an armored figure could be anyone (e.g. Scipio), although the winged "Roma" helmet could speak to Mars being the father of Romulus and Remus, the mythical twin founders of Rome.
Mercury: a generic everyman figure that is clearly the weak link, complicated by the fact that the figure is cut off by the frame to the left, but if the figure's principal role is as herald - a primary role of Mercury, especially for Jupiter (whom Mercury precedes and Jupiter is the only one to look in Mercury's direction) - then placed on the leading edge of the scene makes sense. None of these planetary figures are shown as deities per se, with their divine attributes (eagle/lightning bolt, hourglass, caduceus, etc.), but in their "children of the planets" guises, which invites comparison with Baldini's own "triumph of the planets" cycle of engravings which shows these "children" in abundance. The modest beretta-type cap on this figure is featured front and center, directly beneath Mercury himself; it also appears three other times in this engraving (all highlighted in image shown below). This cap was particularly associated by Baldini with Mercury's children. As the god of learning and the arts (and thievery - not shown) - what is primarily shown beneath Mercury - it makes sense for Mercury's "child" to be representative of the artistic trades (clearly there are other options here, but this one makes as much sense as others):

Baldini - planets-triumph of love, Mercury and children.JPG
(284.38 KiB) Not downloaded yet