#11 by mikeh
Maria Monica Donato was the principal art historian involved in the restoration of the frescoes. Unfortunately she suffered an untimely death in 2014. An almost final draft was edited by Giulia Ammannati, Monia Manescalchi and Matteo Ferrari. and published as "Gli affreschi del Palazzo dell'Arte de' Giudici e Notai" (The frescoes of the Palace of the Guild of Judges and Notaries), in Annali della Scuola Normale Superiore di Pisa Classe di Lettere e Filosofia, serie 5, 2015, 7/1, pp. 3-33.

Relevant here is one diagram, one photo, and a few paragraphs. 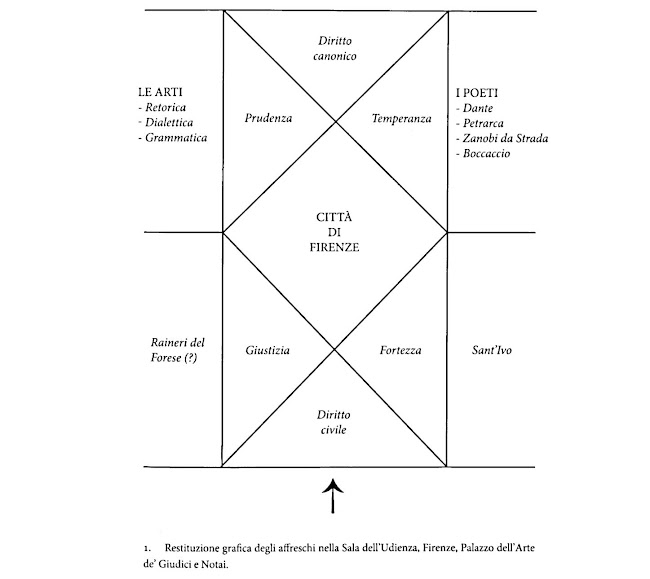 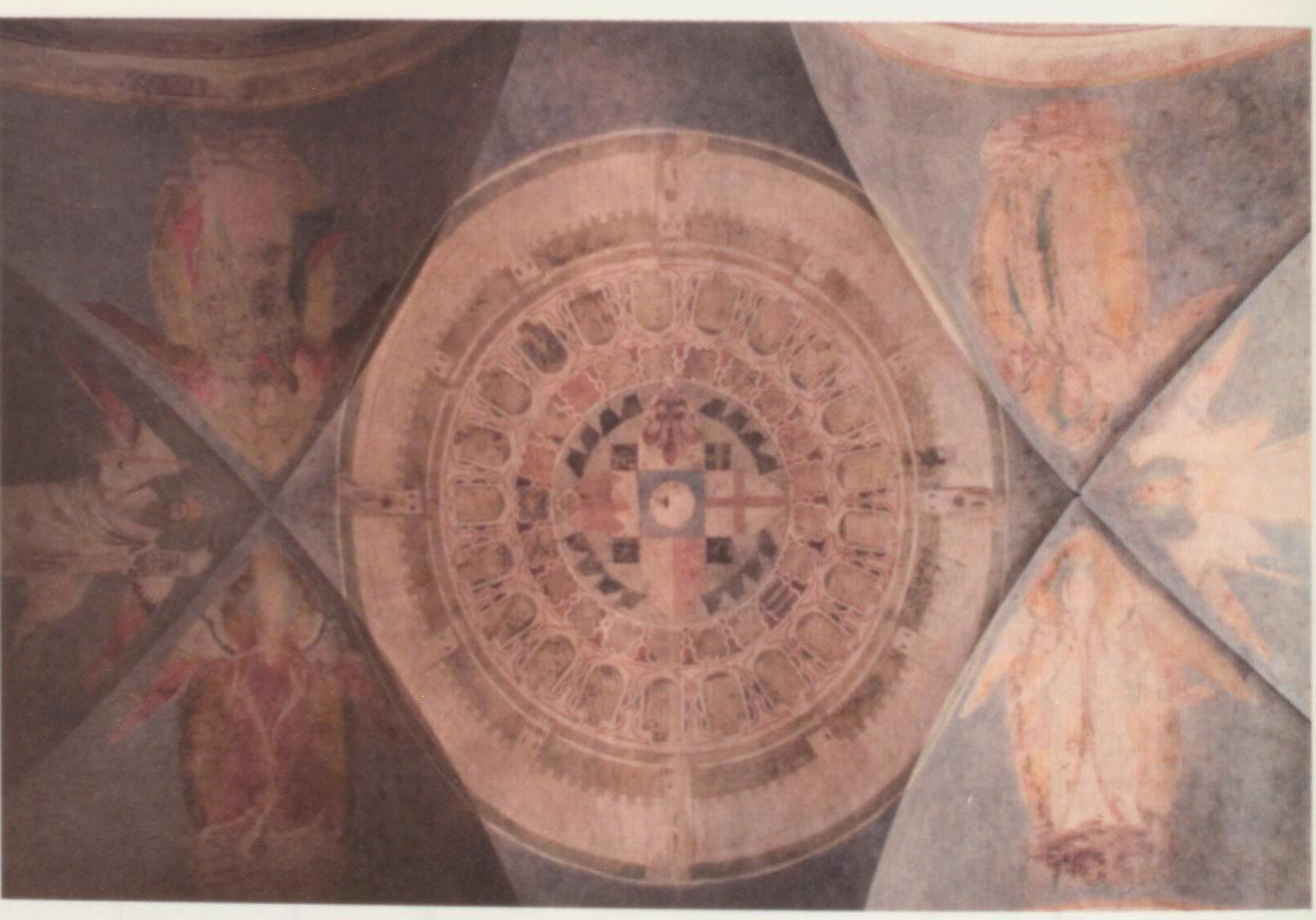 (Florence and its institutions among the cardinal virtues). 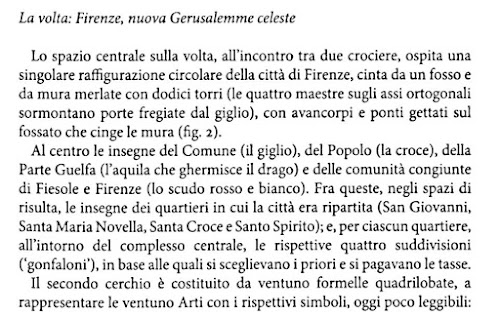 The central space on the vault, where two cross-lines meet, houses a unique circular depiction of the city of Florence, surrounded by a moat and crenellated walls with twelve towers (the four masters on the orthogonal axes surmount gates decorated with lilies), with foreparts and bridges thrown on the moat that surrounds the walls (fig. 2). At the center are the insignia of the Commune (the lily), the People (the cross), the Guelf Party (the eagle that seizes the dragon) and the joint communities of Fiesole and Florence (the red and white shield). Among these, in the resulting spaces, the signs of the districts in which the city was divided (San Giovanni, Santa Maria Novella, Santa Croce and Santo Spirito); and, for each district, around the central complex, the respective four subdivisions ("gonfaloni"), from which foundation the priors were chosen and taxes were paid. The second circle consists of twenty-one four-lobed tiles, representing the twenty-one Arts (Guilds) with their respective symbols, which today are hard to read:

among these the eight-pointed gold star in the blue field of the Guild of Judges and Notaries stands out. The third circle is also made up of twenty-one panels, today unreadable, which probably represented small figures of the patron saints of the twenty-one Arts [Guilds].

A first evaluation of this peculiar image of the city was offered by David Friedman (15) "Florence not personified but evoked by the heraldic organizational chart, in three concentric circles that represent the city institutions, that is. the "forces [...] that participated in sovereignty" (16). Thus institutional architecture of the city, the stability and regulated functioning the judges and notaries are the guarantors and guardians." 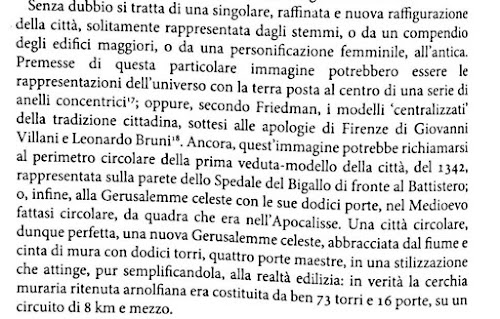 Without doubt it is a singular, refined and new representation of the city, which was usually represented by the coats of arms, or a compendium of the major buildings, or by a feminine personification, in the antique style. Premises of this particular image could be the depictions of the universe with the earth placed at the center of a series of concentric rings (17); or, according to Friedman, the 'centralized' models of civic tradition that underlie the apologias [essays in defense] of Florence by Giovanni Villani and Leonardo Bruni (18). Again, this image could refer to the circular perimeter of the first-seen model of the city, from 1342, represented on the wall of the Spedale del Bigallo in front of the Baptistery; or, finally, to the heavenly Jerusalem with its twelve gates, in the Middle Ages made circular, from the square in the Apocalypse. A circular city, therefore perfect, a new heavenly Jerusalem, embraced by the river and surrounded by walls with twelve towers, four main gates, in a stylization that draws on, even simplifying, the real constructions: in truth the walls considered Afnolfian (?) consisted of 73 towers and 16 gates, on an 8 and a half kilometer circuit.

This image of Florence constituted the model of that, much reworked, which was found in the destroyed headquarters of the Guild of the Physicians and Specialists, now preserved in the Silk Guild; and perhaps it even inspired the circular shape of the center of the Vasari ceiling of the Salone dei Cinquecento, originally projected to be in the center of [start p. 13] originally projected to have Florence in the center and around it the coats of arms of the Guilds, but in the final version, with the Duke in Apotheosis in the center, crowned by Florence.

But let us return to the Palace of the guild of Judges and Notaries Around the representation of Florence, probably some time after the frescoing of the vault, allegorical and historical subjects were painted in the lunettes, partly deciphered, and which can now be the subject of new studies thanks to the restoration. 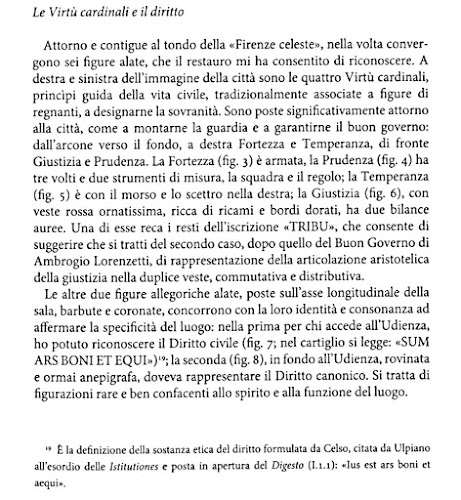 Around and contiguous to the tondo of the "celestial Florence", six winged figures converge in the vault, which the restoration allowed me to recognize. To the right and left of the image of the city are the four cardinal Virtues, guiding principles of civic life, traditionally associated to the figures of rulers, to designate their sovereignty. They are placed meaningfully around the city, as if to guard it and guarantee its good governance: from the big arch towards the bottom, on the right Fortitude and Temperance, facing Justice and Prudence. Fortitude (fig. 3) is armed, Prudence (fig. 4) has three faces and two measuring instruments, the set square and the ruler; Temperance (fig. 5) is with the bit and in the right the scepter; Justice (fig. 6), with a highly ornate red robe, rich in embroidery and golden borders, has two gold scales. One of them bears the remains of the inscription "TRIBU", which allows us to suggest that this is the second case, after that of the Good Government of Ambrogio Lorenzetti, of representing the Aristotelian articulation of justice in the dual capacity, commutative and distributive.

The other two winged allegorical figures, placed on the longitudinal axis of the hall, bearded and crowned, contribute with their identity and consonance to affirming the specificity of the place: in the first, for those who enter the Audience Hall, I was able to recognize civil law (fig. 7: in the title block it reads: "SUM ARS BONI ET EQUI") (19); the second (fig. 8), at the rear of the Audience Hall, ruined and now anepigraphic, was to represent canon law. These are rare and well suited to the spirit and function of the place.

19. It is the definition of the ethical substance of the law formulated by Celsus, cited by Ulpianus in the introduction of the Institutiones and put at the opening of the Digest (I.1.1): "Ius est ars boni et aequi".

With this decorative complex, in which the sky is rendered from the iteration of the coat of arms of the Art (a golden star with eight points in a blue field), the Judges and Notaries put on stage an apotheosis, a true ascent to heaven of the institutional harmony of the city: a "celestial Florence", protected and glorified by the exercise of virtues and the cult of law, of which this hall is the seat par excellence.

In the next section (original not posted) Donato notes that there was a payment for work on the vault to Jacopo di Cione (ca. 1340-1400) and a certain Niccolo, ""cofanerio", for gold and blue, and in the autumn to the same Jacopo "for part" of his work. There is another payment in 1468, but that might also be for some work started by his late brothers, Andrea Orcagno and Nardo di Cione, "both dead n the sixties."The lunettes are certainly later. The poets seem to have been done in 1406, on the order of Domenico Silvestri, elected consul of the Guild in that year. They continue in visual art the literary expression of Florentine civic patriotism initiated by Salutati against Visconti and continued in the 1406 apologia by Filippo Villani.

My end comment: The cardinal virtues' association with the 16 districts of Florence is part of that civic patriotism. But how much a card game inspired by the 4x4 districts and/or their association with the virtues would be identified with that civic pride is not clear to me. Petrarch at least was as much connected with Milan as Florence, and of course Dante had been in exile from the Guelf Paty under pain of death, identifying himself with the Empire rather than the republic he had formerly championed. These could be claimed by others as much as by Florence.. It was the same for the virtues. As for the 4x4 structure, I still don't know, although the practice of dividing a town into four main parts seems to be of Roman origin (https://en.wikipedia.org/wiki/Quarter_( ... bdivision).
.