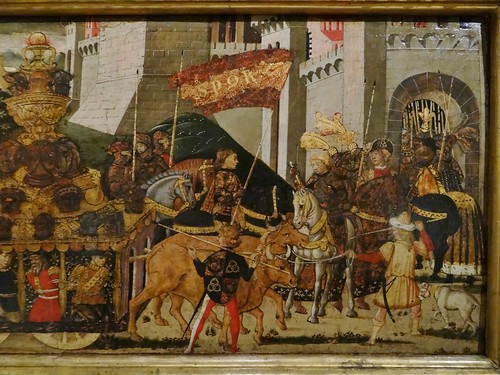 #172 by BOUGEAREL Alain
Did i forget somthing or someone?
These elments were not included on the "Update on a historical research" because they remain under discussion and no consensus has yet been found.
Interesting speculations to be confirmed or infirmed
http://www.sgdl-auteurs.org/alain-bouge ... Biographie
mikeh
mikeh

That's interesting.
Depaulis surely has a reason
Maybe Ross who has recently published with him an e book on Lulu.com could help here?
Maybe directly asking : why?
http://www.sgdl-auteurs.org/alain-bouge ... Biographie

#175 by Ross G. R. Caldwell
I don't recall having discussed the dating with Thierry, at least in any substantial way. So I don't know his reasoning.

We discussed the provenance a lot, starting in 2007, when we moved to agreement that Charles VI, Catania, and the Rothschild cards were Florentine. Thus the old "Ferrara, late 15th century", or "circa 1480" were no longer tenable.

It could be that he finds 1460 a sufficiently conservative date, neither too early nor too late.

I want to put them as early as possible, at least 1450, based on Apollonio's cassoni productions. But I believe that Charles VI and Catania were made by the same workshop, certainly, and represent the standard luxury production of that atelier in Florence. I imagine this is the kind of pack Giusto Giusti commissioned for Sigismondo Malatesta.

We discussed the provenance a lot, starting in 2007, when we moved to agreement that Charles VI, Catania, and the Rothschild cards were Florentine. Thus the old "Ferrara, late 15th century", or "circa 1480" were no longer tenable.

It could be that he finds 1460 a sufficiently conservative date, neither too early nor too late.

I want to put them as early as possible, at least 1450, based on Apollonio's cassoni productions. But I believe that Charles VI and Catania were made by the same workshop, certainly, and represent the standard luxury production of that atelier in Florence. I imagine this is the kind of pack Giusto Giusti commissioned for Sigismondo Malatesta.

Thanks Ross for your answer.
About Giusto Giusti; Vitali wrote (translation Howard)
In 2002, historian Nerida Newbigin reported information from the Diari (Diaries) of the notary Giusto Giusti, who in 1440 gave Sigismondo Malatesta a pack of Triumphs made specially in Florence. As of today's research, this document is therefore the first known citation concerning the game of Triumphs: «Venerdì a dì 16 settembre donai al magnifico signore messer Gismondo un paio di naibi a trionfi, che io avevo fatto fare a posta a Fiorenza con l’armi sua, belli, che mi costaro ducati quattro e mezzo». ("On Friday, September 16, I gave the magnificent Lord Messer Gismondo one pack of triumph cards, which I had had to be made in Florence with his beautiful arms, which cost me four and a half ducats.") (1) The Triumph pack was embellished with Malatesta’s insignia, according to a practice that we find also in the decks made by the Visconti and Estensi. The sum paid must have been quite high, considering that Giusti, who had served Malatesta for about a year, would have felt obliged to give the Duke a gift of some importance.

Giusti Giusti was born in Anghiari in 1406 and had for twenty years been practicing the profession of notary for the Florentine Republic. The relationship with Malatesta dates back to late 1439, when the person of our concern convinced Agnolo Taglia, captain of an Anghiari company [of soldiers], to enlist the service of the Lord of Rimini. Giusti allegedly died in his native town in 1484 and was buried in the Anghiari church of Badia.

Giusti’s Diaries were made up of a series of twenty notebooks, memoirs in which he noted all the important events of his private and professional life, including negotiations, contracts, special meetings, weddings, payments, extraordinary events, storms, earthquakes, and festivals. Since the original manuscripts have been lost, the Diaries have come through seventeenth-century copies partially transcribed by people who had different interests and who made choices based on entirely personal criteria. Among them are the Florentine architect Antonio (1551-1636), the historian Lorenzo Taglieschi (1598-1654) and especially Carlo Strozzi (1587-1570), senator of the grand duke of Tuscany and one of the most important members of the Academy of the Crusca. It is his transcription that is of our interest, dated 1621, housed in the State Archives of Florence (2).

Source :
Sigismondo Malatesta and the Triumphs
A Golden World
http://www.letarot.it/page.aspx?id=674&lng=ENG

Added later on : dating the TdChVI
My guess based on the Stemma of 7 Palles on the Charioter for the TdChVI would rather be around 1464 when Cosme dies : Piero de' Medici, called also Piero il Gottoso and before the 1465 gift of the Fleur de Lys by Louis XI
The soonest possible could also be 1461 when he access to the function of "Gonfalonnier de justice" de Florence
Not far from Depaulis suggestion : "around 1460"
http://www.sgdl-auteurs.org/alain-bouge ... Biographie
mikeh
mikeh

Alain, in your essay as posted on Vitali's site and translated here by me, it seems to me that Dummett's and Depaulis's later thoughts on the order of triumphs in the ChVI should be included, as both theorists seem to have changed their minds after the 1980s

Michael Dummett looked at the Roman numerals written in ink on the top of the cards (except for the case of the Hanged Man) and partially trimmed: we can thus reconstitute an order of triumphs that seems close to the Bolognese tradition ..." [...] "Unless the tarot of Bologna was inspired by it" (1)

It seems to me important to add something such as the following:


However, Depaulis wrote this report before the publication of Dummett’s Il Mondo e l’Angelo in 1993 and before Depaulis came upon a c. 1500 Florentine poem (called a strambotto) that gave an order closer to that of the TdChVI than that of Bologna (2) These events resulted in Depaulis's refinement of his position. He wrote in 2007:

“As Michael Dummett has pointed out, the Charles VI pack 'differs from the Bolognese order in that the virtues are ranked below the Chariot' (footnote: Il Mondo e l’Angelo, p. 228, my translation), a feature which seems to be a Florentine hallmark. We have seen that the Strambotti d'ogni sorte & sonetti alla bergamasca collection was very probably printed in Rome, a city which was highly dependent on Florence for its playing and tarot cards. We may add that the anonymous Strambotti de triumphi is set in the Tuscan form (abababcc) (Footnote: A strambotto can follow one of three kinds of rime set: Tuscan (abababcc), Sicilian (abababab), or Romagnolo (ababccdd)).

All this invites us to specify a 'sub-order' which we may call 'Florentine', distinct
from the Bolognese order, of which the Rosenwald sheet and the Strambotti de triumphi, both dated c.1500, are good witnesses. That the Tarot de Charles
VI belongs to this 'Florentine' branch rather than to the Bolognese one is
now more obvious.” (2) (3)

However Depaulis in 2007, following a suggestion by Ross Caldwell, reads the number on the TdChVI Chariot card as “x”, i.e. 10, rather than Depaulis’s earlier “ix” and Dummett's “viiij”, i.e. 9.

Correction added Sept. 6, 2018 The last sentence above - "Given that the numbers were added considerably after the cards were made, probably after 1500, a conformity to Florentine usage does not show that the TdChVI is Florentine, but only that the numbers were probably added by someone who played the game in the Florentine manner" - should be disregarded, for reasons pointed out by Ross in posts following this one. In the first place, the "given that the numbers were added considerably after the cards were made" is only a probability, not a fact, and even then the word "considerably" should be changed to "somewhat". Secondly, the rest of the sentence is misleading, in that it might suggest that I am casting into doubt the attribution of the ChVI to Florence. That was not my intention, but only to say that the numbers in themselves are not enough to show Florentine origin for the deck (this much was said by Dummett in 1993, for which see below). They are one consideration out of others, I would say now.

That said, I want to add two references to the foregoing.

Second, the full passage in Dummett's 1993 book was posted in Italian with my translation at viewtopic.php?p=15160#p15160. I translated the quote from Dummett as "since the virtues are of lower rank than the Chariot...". Dummett's original wording was "in quanto le virtù sono di rango più basso del Carro". Both are substantially the same as Depaulis's "in that the virtues are ranked below the Chariot".

#178 by Ross G. R. Caldwell
Mike -
"Given that the numbers were added considerably after the cards were made, probably after 1500, "

I'm out of the loop on this. Until now, I believed only that the numbers were probably added after the cards were made, but that there is really no way to tell. What new discoveries did I miss?

"a conformity to Florentine usage does not show that the TdChVI is Florentine, but only that the numbers were probably added by someone who played the game in the Florentine manner."

The iconography of the Charles VI, Catania and Rothschild sets (per Fiorini, Depaulis, Caldwell) gives them to Florence, and the numbering of the first two is consistent with that, so I see no reason not to think that the cards were both made and numbered in Florence. What is gained by assuming otherwise?

#179 by mikeh
Thanks. No new discoveries. Just Depaulis 1984, in the paragraph just before the one already quoted from Alain's essay:

"The figures shown are those readable, partially or not, at the top of the cards - except for the Hanged Man, where the figure is written at the bottom, 'upside down'. These Roman numerals are drawn in ink and appear slightly after the completion of the cards (first half of the 16th century at the latest)" (1)

I stand corrected. Thanks for catching this. I should have said, "Given that the numbers appear to have been added..."

And I did not mean to imply that this gives any reason for thinking that the cards weren't Florentine. It's just that the numbers by themselves don't show that they are Florentine. The iconography is another issue. I will have to think about how to rewrite this.

#180 by Ross G. R. Caldwell
Good to know. I hate to miss something, and I can be out of touch these days.

But I thought you were with the consensus that Catania, Charles VI, Rothschild were Florentine. I thought we settled it years ago. Do you doubt it?

In Rothschild the Emperor's florin was the lightning bolt for Thierry and Cristina. For me it was not a sudden realization, just a deduction from comparing Charles VI to BAR and Rosenwald, back in 2006. Later I learned of what the other two were working independently on. Given the uncertainty of Rosenwald's provenance and date, my earlier methodology may not have been sound, but even if it were a happy accident, it led in the right direction. Finally, the three sets share identical borders, completely different from the other luxury sets of Este and Visconti/Sforza, which suggests the same workshop. Besides other stylistic similarities. So if one set is Florentine, they all are.