NVVVA makes little sense to me, but possibly it should have been NVEVA = Nueva Hispa[nia]

#32 by Huck
There was a Spanish Trionfi game (Vives etc.) without trumps in the Italian manner around 1540. There are also French producer names on decks with Spanish style, the Jehan Bresson deck found in Leyden for instance c. 1570. Actually an Aluette deck, as far I remember.

I've embedded a few entries in the collection thread.

The name Guymier became rare in France, actually only in the region of Nancy (playing card production region). http://www.geopatronyme.com/nomcarte/GUYMIER

Cosme Guymier worked for some time in Laon, Aisne, and Vieville region. Not far from Tournay. ... .-) ... perhaps he imported the idea to his family to produce playing card decks.
Would be interesting to know, when the Parisian line of the Guymier started and where the family came from. Early picture printing technology was strong in Germany and Northern Burgundy. It makes logic to assume, that persons related to printed pictures in Paris came from the East.

I don't know, what Stadtborn shall be. Perhaps the city "Born" in the Netherlands. Possibly "Jehan Petit" developed from this contact on a long run.
1486: First printed commentary by Cosme guymier
1493: First print by Jehan Petit (?), at last active in the book business.

“In 1472,” says the author of “The History of Paris” and of the “Singularités Historiques,” “Hermann Von Stathoen came from Mayence to Paris entrusted by the famous printers Scheffer and Hanequis to sell a certain number of printed books. While at Paris he was attacked by fever and died. In virtue of the droit d’aubain the king’s officers took possession of the books and money of the defunct, sending the latter to the king’s exchequer and the former to the king’s library. This proceeding was by no means to the taste of Scheffer and Hanequis, who complained to the emperor, and obtained from him letters addressed to Louis XI. in which the French king was invited to restore both books and money. Louis XI. admitted the justice of the claim, and on the twenty-first of April, 1475, issued Letters Patent in these terms: ‘Desiring to treat favourably the subjects (Scheffer and Hanequis) of the Archbishop of Mayence, and having regard to the trouble and labour which the persons in question have had in connection with the art and craft of printing, and to the profit and utility derived from it, both for the public good and for the increase of learning; and considering that the value and estimation of the said books and other property which have come to our knowledge do not amount to more than 2,425 crowns and three sous, at which the claimants have valued them, we have for the above considerations and others liberally condescended to cause the said sum of 2,425 crowns and three sous to be restored to the said Conrad Hanequis.’” Dulaure, after citing this letter, adds that the restitution was made in such a manner that the printers received every year from the King’s Treasury a mere driblet of 800 livres, or francs, until the entire sum had been repaid.

I didn't find an explanation, why the person was called "de Stathoen".
Huck
http://trionfi.com

... only snippet view, but knows a lot about the playing cards in Paris.
Huck
http://trionfi.com
SteveM
SteveM

SteveM
*12: Item, no Master of said trade may sell nor expose for sale "cards {with}* cows" as fine cards, if they are not made of fine Cartier paper in front and behind and with main colours of indian and vermilion, in penalty of confiscation of the merchandise applicable to the poor.

* "en' in archaic french usage could mean 'of its, their", to indicate either possession or a characteristic of something such as its shape or colour (or image of a cow!)

[Similarities between the TdP and Aluette pips (both being related to Spanish type latin style suits) have been made previously in thread(s) on TdP]
Immature poets imitate; mature poets steal; bad poets deface what they take, and good poets make it into something better, or at least something different.
T. S. Eliot

SteveM wrote:"en" in archaic french usage could mean 'of its, their", to indicate either possession or a characteristic of something such as its shape or colour.

Yes, "en" may mean what you say. It is style used in music, for exemple, and not only in french.

In this context, though, it seems it is a matter of material : cow hide. So :

"cards made of cow hide ("leither") for fine cards, if they aren't made of fine paper , front and behind"

But may be there's a point to verify about "cartes en vache" ?.....
SteveM
SteveM

(They are also published in Rene d'Allemagne, Volume II)

Do we know if any of these cardmakers made cards of leather?

We know that Guymier at least made spanish style suited cards - a stylem same as aluette, or "la vache" -- as did the maker of the anonymous TdP ---

Possibly, there is ambiguity I think - a google search leads only to the statutes of the cardmakers of Paris, so "cartes en vaches" seems a unique or rare expression --

One of the Paris makers of La Vache was Claude Langlois c1750, I wonder if the cardmaker Alain Langlois was an ancestor (in 1568, contre Guyon, Alain was prosecuted for using the ensigne of the Guymiers, and ordered not to do so on pain of confiscation (nor to use part of the enseigne - such as two fishes instead of three - from the same prosecution we learn that as well as three fishes, the guymiers also had an ensigne of two porcupines!? (porcz espiez)
Immature poets imitate; mature poets steal; bad poets deface what they take, and good poets make it into something better, or at least something different.
T. S. Eliot 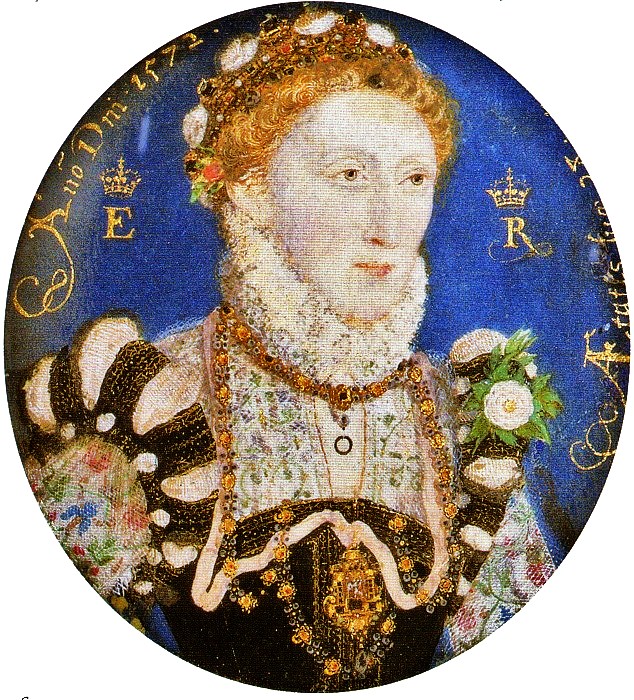 Vellum is an expensive sort of parchment (made from calves skin).

The descriptions of the Goldschmidt cards and of the Rothschild cards by Hoffmann 1972 mention "Pergament" (= parchment) as used basic material.

Does this help in the question about the expression "en vache" ... ?

Hoffmann relates the Correr cards to the Rothschild cards. 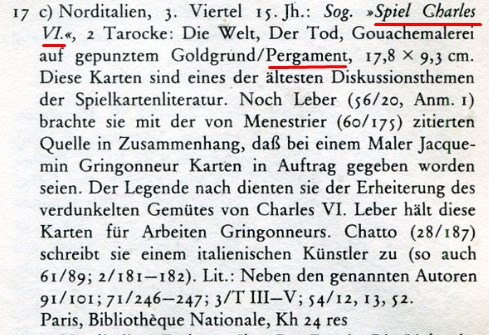 #38 by SteveM
Even accounting for archaism the phrase is awkward and ambiguous in context, as spanish suited cards were either used for tarots or la vache, to say of leather or of cow skin would have been more definite -- I think more probably it means leather/parchment - as la vache as a name of the game became more common at a later period:

here is another parchment deck, c 1509

SteveM wrote:-- I think more probably it means leather/parchment - as la vache as a name of the game became more common at a later period:


In some later descriptions of the act (1713 and on) there is no mention 'of cows', but merely stated that 'fine cards' should have fine paper front and back (as 'fines' cards were supposedly thinner, it is hard to imagine leather or parchment cards, with paper front and back, as ending up 'thin'!) -- perhaps a way of repeating/reporting something which includes something not understood, to merely elide the part one doesn't understand -
Immature poets imitate; mature poets steal; bad poets deface what they take, and good poets make it into something better, or at least something different.
T. S. Eliot


The deck has interesting suits (pique and carreau are modified) ... So it seems a late experimental edition, not of interest for the use of parchment in older times.
Huck
http://trionfi.com