mikeh wrote: I am not sure that Etteilla was a practicing astrologer. Holbronn says his "astrology" bears no relation to anyone else's. He did know about the 7 planets, 12 zodiacal signs, and parts of fortune. Whether he knew about epicycles I don't know, but probably so, why not? I will check the 4th cahier.

I made a presumption based upon the fact that horoscopes were among the services he advertised - he also knew other technical aspects, such as formula for Arabic parts, or at least the Part of Fortune, which he included on his cards - and his integration of tarot and (horary) astrology generally* -- I don't have the fourth cahier (or the others) any longer, and hadn't really had the chance / time to look over it closely when I did have it, since the fire destroyed all my hard-drive backups -- ***


That's great about your anonymous gift.

*Elizabeth Hazel & James W. Revak at one time had an article, with examples, on Etteilla's astrological integration and method -- I can no longer find it online -- but there is a Spanish translation of their article with illustrations here:

Oh - the fourth Cahier is at google !? 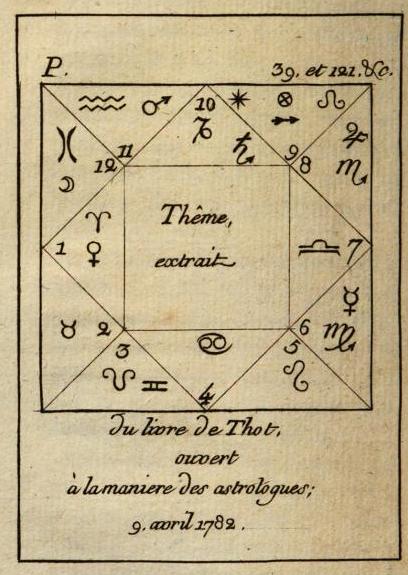 In terms of translation, looks pretty straight forward (I am pretty au fait with astrology, so perhaps that is why it seems easier to follow than some of his other works), at least in comparison with the first cahier (in which I find the numerical references very confusing and hard to follow!)
Immature poets imitate; mature poets steal; bad poets deface what they take, and good poets make it into something better, or at least something different.
T. S. Eliot

Etteilla and disciple's pythagorism is indeed of interest.
Yet I am quite sure that they did rely on what I would call an elementary pythagorism at best reduced to the Decade and to triangular figurated numbers such as 78 = 1+2+3+5 +6 +7+8+9+10+11+12
They had no intuition of pentagonal numbers and their figurate expression.

The Arithmological Tarot - though it still remains alike an "invisible" matrix, only because there is, yet, no evidence discovered of it in the times of the standardisation of the deck and related to it, remains as a clear reference to Triangular, Square and Pentagonal figurate numbers in a "whole".

The modern attempts are in the spirit of Etteilla's pythagorism.
They finally reduce the Pentagonal 22 to 2 Decades +2,
This is an elementary Pythagorism,
It is orthodox because it views the expansion of numbers as an arithmetical succession of Decades. This is in conformity with Nicolas de Cuse.
But is does not take in account the figurate pentagonal expansion of Number 22 and simplifies this Pentagonal figurate geometrical expansion of Number 22 to an elementary Pythagorism of a Decimal Numeroly(10+10+2)

We know from the philosophers game that Pythagorean proportions were in use as a strategy to win a game.
These notions of Harmonia were far more complex than the very simple arithmology of the Pentagonal 22;
1 Unity
4 Tetrad
7 Septenaire
10 Decade

So if I understand that Occultists or Moderns do not understand or find too complex pentagonals figurate numbers, I m not sure at all, that in the time and space of the birth of Tarot, close to learned people aware of Pythagorism or close to the Platonician Medicean Academy, these notions would have been unknowned or seemed far fetched ...
http://www.sgdl-auteurs.org/alain-bouge ... Biographie

Well maybe not - if Mikeh or Steve would be kind enough to translate...


I had found some specific data about Pentagonal Number 22 as the arithmetic serie 1,5,12,22 [gnomons : 1+4+7+10]
Boece « De institutione arithmetica » edition 1867
https://archive.org/details/aniciimanliitor01friegoog

(still a little late but pretty explicit - an edition incunable 1499)
Surely there are prior editions with digitalized views available today ...there have been before so many since IXth century...
Auteurs : Association des Professeurs de Mathématiques de l'Enseignement public
http://www.apmep.fr/IMG/pdf/03_Eclairs_ ... -Age_I.pdf

Conclusion
The 22 subjects of the standard Tarot ; an "arithmétique théologique"
- an iconografical progression or mystical stair - Christian
- a numerical progession or a "mystical arithmetic" : Pythagorean
and vice-versa :

I am looking for a Christian learned Pythagorean aware of figurate numbers and interested in games in the last quarter of the XVth centuy or the very beginning of the XVIth in Italy - circa the period of Cardinat of Cardinalat of Giuliano della Rovere Pope 1503 as Jules II (correction added 14/02)- and from there exploring his relations. 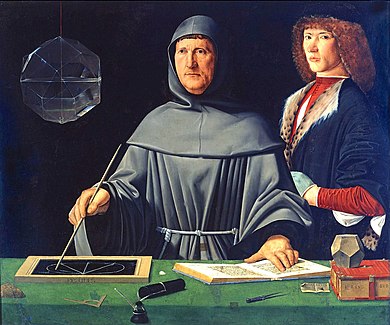 I am looking for a Christian learned Pythagorean aware of figurate numbers and interested in games in the last quarter of the XVth centuy or the very beginning of the XVIth in Italy - circa the period of Cardinat of Jules II de Medicis - and from there exploring his relations.


About Paccioli Isabelle d'Este and chess :

paccioligames1.PNG
(136.73 KiB) Not downloaded yet

paccioligames2.PNG
(66.72 KiB) Not downloaded yet

paccioligames3.PNG
(127.98 KiB) Not downloaded yet

For the moment , appearently nothing about Pentagonal numbers as 22 in Tarot. But, we have a high learned Pythagorician (maybe the best), Paccioli, interested in games such as chess in a Pythagorean approach, fan of card magic tricks, with Isabelle 'Este in Mantoua linked to cards and trionfi, in 1500 under Cardinalat of Giuliano della Rovere ., five years before the apparition of the word "tarocchi" (D'Este) or "taraux" in Avignon ....
[BtW why do I speak about the Cardinalat of Giuliano della Rovere : because this englobes his first cardinat in Avignon also...another thread of interest still at work - may well become of interest to understand the simultaneity of the appearance of tarrochi (Este) and taraux (Avignon) two years after his nomination to Pontificat in 1 Novembre 1503 as Jules II)
https://fr.wikipedia.org/wiki/Jules_II
viewtopic.php?f=11&t=691&hilit=bougearel

Hmmmm!
Right time, right place, right persons ...of interest for sure! No?
At least, it legitimates a deeper inquiry, i believe.
Paccioli did not write a manuscript a about Tarot like he did about Chess.
But he knew about cards.
Did he or close relatives influence for a Pythagorean standardisation to 22 for the Iconografical figures?

Emilia PIA and Timoteo Viti
Another interesting link with many informations : Castigione at the service of the Marquisat of Mantoua and specifically his long lasting "relation" (until death) with Isabelle d'Este and also the description of the Court's games at the Court of Urbino conducted by Emilia PIA.
http://autourdelombreduconnetable.com/b ... ur-durbin/


Connection Boiardo / Viti as well as the Urban court via Emilia PIA.
(Young Pietro Bembo is already there debating with Emila PIA. He'll have as teacher in 1492 the long living Byzantin Constantin Lascaris (1434-1501), the preceptor of Francisco Sforza in Milan and close to Bessarion )


The "overlooked" figure of Emilia PIA - she first appears in an still obscur for me connection with Boiardo and VIti : Huck had found the information but I ve lost the link and she appears after close to Isabelle d'Este and becomes the confident of the Lady of Urbino.
viewtopic.php?f=11&t=1102&hilit=emilia+ ... 270#p17505

Timoteo VITI
viewtopic.php?f=11&t=1102&p=17504&hilit ... ens#p17504
He come back from Bolona to the Urban Cour t in 1495 and would have been the master of Raphael.
Raphael's later School of Athens ...
https://en.wikipedia.org/wiki/The_School_of_Athens
http://www.sgdl-auteurs.org/alain-bouge ... Biographie
mikeh
mikeh

About Paccioli Isabelle d'Este and chess :

Where is this from?

The question is, were Pentagonal Numbers part of the standard quadrivium of the time or not? If so, anybody could have applied the numbers connected with them to the cards.

What is then important is the number 5, for pentagonal. It is for the fifth suit, the one that shows the way to God, an especially sacred number, of the Pope card and of the various sacred associations to the number that made it particularly holy. For example Augustine: the five wise virgins, who have abstained from unlawful use of the five senses (http://www.newadvent.org/fathers/160343.htm); the "five books of Moses", the "five porches containing the sick folk", the "five loaves feeding the five thousand" (https://books.google.com/books?id=wIp0A ... ve&f=false), and the five stigmata of Christ, the same repeated for Francis of Asissi (https://en.wikipedia.org/wiki/Stigmata).

But perhaps some author emphasized pentagonal numbers for some reason. If so, the relevant passage needs to be found.

One thing: Julius was not a Medici; he was a della Rovere (https://en.wikipedia.org/wiki/Pope_Julius_II). The Medici popes were after him.

mikeh wrote:
One thing: Julius was not a Medici; he was a della Rovere (https://en.wikipedia.org/wiki/Pope_Julius_II). The Medici popes were after him.

Users browsing this forum: No registered users and 28 guests