mikeh wrote:There is another possibility for the "4th sheet":

The 4th sheet only has to be used once for four times of the others. The matrix remains the same, so that there is no need to reset anything.

I don't think you can play tarocchi without a Queen of Batons. All the other Batons are present; it's either all or none. You can play without a Popess, but you still need a Queen of Batons. I suppose you could stipulate that what looked like a Popess, despite the tiara, the Roman numeral II, and the absence of anything resembling a baton, was really the Queen of Batons. But that is rather awkward and cheap. Also it is too easy to forget that the lady with the tiara isn't really a trump but a Queen. Enough so as to make it a rather unpopular purchase, I would think.

It would make more sense to play without the Empress, since she does have a baton; to make her a Queen of Baton, you just have to ignore the globe and the Roman numeral III. That is possible in Minchiate, which has three undifferentiated "papi", but not in tarocchi, which never in any list removes the Empress. Even then, it is rather odd-looking, and it would be very easy during play to confuse the Queen of Batons with a "papa", again probably enough to make such a deck an unpopular purchase.

Removing Prudence to make room for a Queen of Batons is indeed possible. But it is one of the hallmarks of the Minchiate is that it has the three theological virtues. That would suggest all seven; six would be very poor form, in a deck that doesn't otherwise stint on complete sets: i.e. elements and zodiacal signs.

I like very much your assignments of suits to virtues.

Justice has a swords - Swords.
Temperance has cups - Cups.
Prudence has a mirror - this looks like Coins.
Fortitudo feets with batons ... fighting.

It is that set of assignments I used in my reconstruction of the CY, with each virtue put into a different quadrant of the known suit-assignments, given the Beinecke ordering (below is from viewtopic.php?f=11&t=1086). The words in italics are my proposed "missing cards": 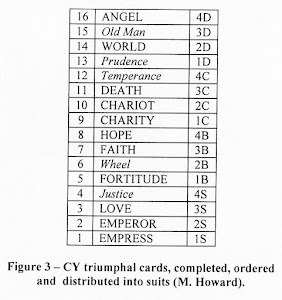 But 4 Fools appear only in the Hofämterspiel, and that's from Prague or German language region, so this idea has evidence from "far away".
The disappearing Prudentia is in contrast an Italian feature, at least we had variously reason to discuss the phenomenon. The idea, that Prudentia was connected to the Papessa, existed already before our period of Tarot history research. I remember dark, that also Dummett thought in this direction ... perhaps I look this up occasionally.

I tried to focus on things, which are NEAR to the Rosenwald Tarocchi and which are related to the hypothesis, that the Rosenwald-scheme was made to produce with 4 woodcut boards 3 different type of decks, 48 cards, 72 cards or 96 cards. That would be an economical solution, the cheapest way to produce.
The 3 Queens on the block for trump suits create a problem for the deck type with 3 suits. Was it played with 72 cards or with 69, just throwing the Queens away?

The 69 cards solution (as a theory) has the advantage, that 69 is close to 70 and 5x14 seems to have been an accepted game model. Also we have, that the Lucca Tarocchi was played with 69 cards.

Arguments for the 72 solution with 3 Queens: Suits don't need to have ALWAYS the same length for an interesting game. The best example is Tarot itself. The 5x14-deck was logical (all suits have the same length), the Tarot version 4x14+22 is not logical, but became finally more successful. In Doppelkopf the suit of hearts is shorter than the other, cause the 2 heart-10s are declared highest trump. In the practical game that's an interesting detail. The hearts-ace has less chances to make a trick than the Aces of the other suits. I remember, that also the Sicilian Tarocchi was played with suits of different length.

The deck was shortened from 78 cards during the 18th century.[2] The Tarocco Siciliano currently uses 63 cards, one more than the Tarocco Bolognese. Despite this, the pack is sold with one unneeded card, the 1 of Coins, which was used to bear the stamp tax (the only game that uses this 64th card is the four-handed version played in Barcellona Pozzo di Gotto where it ranks as the lowest in the suit of Coins). The pip cards contains ranks 5 to 10 with the Coins also having a 4.


Maybe there was once a local joke about an association between the suit of batons with the penis ... women have no penis. So no Queen of Batons. Who knows? Such ideas might have existed and disappeared with the time. 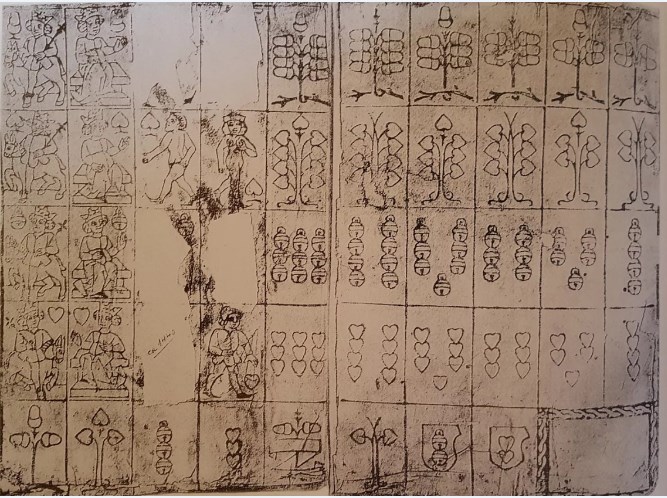 The nude pair is at Ober and Unter of Green, which is equivalent to batons. 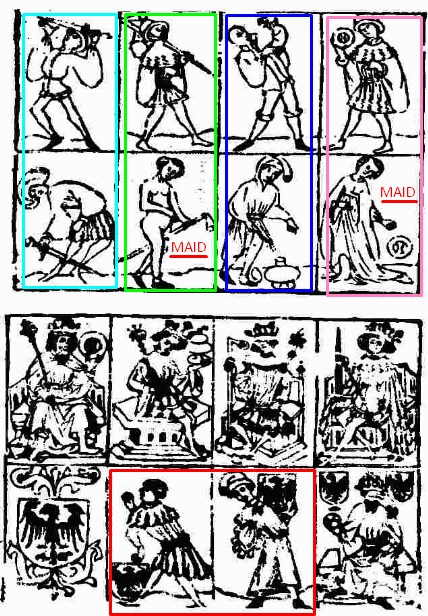 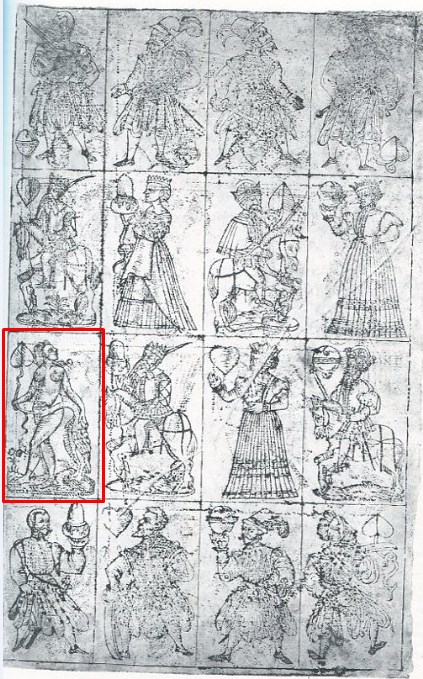 But 4 Fools appear only in the Hofämterspiel, and that's from Prague or German language region, so this idea has evidence from "far away".

I was thinking of four decks' worth of Fools, one per deck, as in the case of the sixteen 10s (sixteen 10s, 4 Fools, 4 Queens of Batons = 24). There are other examples where multiple decks' worth of particular cards are seen on a sheet. Also, I was thinking of reasonable possibilities, ones that don't waste too many cards but produce a deck reasonably like the tarocchi or mnchiate that we know on a matrix similar to that of the other sheets. Do you know other such possibilities?
mikeh
mikeh

The idea, that Prudentia was connected to the Papessa, existed already before our period of Tarot history research. I remember dark, that also Dummett thought in this direction ... perhaps I look this up occasionally.

Added later: For your idea to work, you have to suppose an intermediate form of minchiate in which, as in tarocchi, the Popess exists but no Prudence. Then someone remembers that the Popess once took the place of Prudence. So at a time after the Rosenwald they remove the Popess and restore Prudence, albeit in a different place in the order. That seems to me an unlikely scenario, given that the earlier substitution would have taken place more than 50 years earlier and in a different place in the order. Also, there is no supporting evidence. But I suppose it is possible, and so worth a look for such evidence. But it seems to me much more likely that, if Dummett's suggestion is right, the proto-minchiate never had a Popess and always had Prudence, and that the different place in the order is explained by the move of the game from one city to another, where the earlier order wasn't known.