"In relation to the tarot, a Pythagorean analysis of the deck was given by Guillaume D’Oncieu in 1584 Savoy, part of a lengthy presentation on each of the ten primary numbers and the groups of things falling under them (see Andrea Vitali at http://www.associazioneletarot.it/page.aspx?id=293). When D’Oncieu speaks of a “quaternary” of 56 cards being made “ternary’ by the addition of the 21 trick-taking cards and the Fool, he has in mind the Pythagorean meanings of these terms, the mundane world including the divine. Also, his reference to the number 27 as a quaternary number is a Pythagorean notion; it is the fourth in the series 1, 3, 9, 27, as enumerated by the Pythagorean teacher Timaeus in Plato’s dialogue of that name (I thank Steve Mangan for this last, at viewtopic.php?f=11&t=1102&p=17204&hilit=Lambda#p17204)."
http://www.letarot.it/page.aspx?id=293&lng=ENG
http://www.sgdl-auteurs.org/alain-bouge ... Biographie
mikeh
mikeh

mikeh wrote:Well, yes. But why are you reminding me?

I m not reminding you about your own publications.
I'm just thinking about it and letting others know about a Pythagorean vision at time...
http://www.sgdl-auteurs.org/alain-bouge ... Biographie
mikeh
mikeh

#535 by mikeh
Thanks for the clarification, Alain. Good idea, since we want others to be able to follow our discussion and its rather extensive background.

I now remember another French tarotist who gives a Pythagorean analysis, up to a point: Etteilla. In one sense, he proclaimed his Pythagoreanism in the very name he coined for cartomancy, "cartonomancie", which implies not only cards but numbers (nombre). However we must also ask whether this divination by number has anything to do with the actual arithmology of the Pythagorean tradition. I quoted a passage on Aeclectic a couple of years ago from the 2nd Cahier, of which I transcribed and translated the following:

(...the first sheet, listed no. 1, ... represented--as may be justified by the numbers 9, 10, 11, 12--a light surrounded by a thick cloud, or the chaos which was turned back in order to give place to the Truth, at the moment when the Creator manifested his glory and his sovereign bounty to the Creatures of the whole Universe, which slept and will sleep again in his intelligence: allegorical truth, indeed worthy of our first Masters.)

This first card, the light in the formless darkness, fits the Pythagorean concept of the Monad as God the creator. In order for us to see the formless, the engraver made it a cloud; it is not formless but at least has no definite form. (9, 10, 11, and 12 are his cards depicting the four cardinal virtues; how they "justify" card 1 I do not know, unless he thinks that they have to pre-exist the creation in the mind of God).

The original version of 1789, which I get in black and white from Wicked Pack of Cards's reproduction from Depaulis's set, is on the top left. The "Grand Etteilla II" is on the top right (in two specimens). After that I have put another version, the one used by Grimaud. The particular deck with this card is said by Berti in Tarocchi, Arte, e Magie p. 123) to be c. 1840--why, I have no idea, as Kaplan, vol. 2, dates a deck with a similar card to "late 19th century". Berti adds:

(Appearing at the beginning of the 19th century, it is considered the work of M. d'Odoucet, Etteilla's pupil, it would have been done following the verbal directions of the Master, or simply based on his work.) 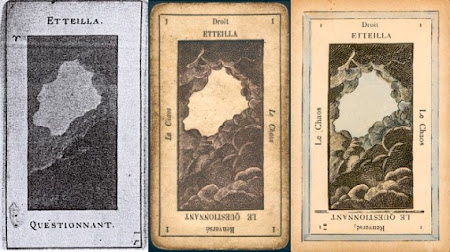 This is also clear in the "synonyms and related meanings" that Etteilla's followers wrote for the card (from "Julia Orsini" 1838 and Papus, Tarot Divinitoire, trans. Stockwell, 1910; "Orsini" has a few more than Papus, which I put in bold):

(If we put the first number, or better the source of the numbers, 1, in order to descend or rise to the first number 2, we shall find man or his number there which is male and female; the first one as agent, and the second as patient;...
1 is related to God; 2 to the man and the woman, and 3 to the generation which aims at a child. The Creator formed Adam, male & female; and separated this number so that he could extend to the number 3, generation. After the number 3 comes necessarily 4, the universe, which we also find in the microcosmic number 2...)

In saying that 1 is not a number, but the source of numbers, he is repeating a fundamental tenet of Pythagoreanism. Relating the Monad to God is another Pythagorean tenet. The number 2 is the separation of 2 from 1 by means of creating opposites: male and female, active and passive, and in the Aristotelian view of generation, mind (father) and matter (mother), form (in God's mind) and formlessness (unformed matter). Then 3 is generation. that is to say, the uniting of matter and form in particular things of different kinds. . As the Theologumena Arithmeticae says (p. 50, Waterfield translation):

...the triad causes the potential of the monad to advance into actuality and extension.

Then 4 is such generation throughout the universe.The Theologumena again (p. 55):

Everything in the universe turns out to be completed in the natural progression up to the tetrad, in general and in particular, as does everything numerical--in short, everything whatever its nature.


This is because the numbers up to 4 add up to 10, the Tetrakys, which is the entire cycle, and also because it takes at least 4 points to define a solid, the limit in spatial dimensions of the universe.

In finding the universe in the "microcosmic" number 2, Etteilla is merely showing off that he knows the Hermetic view that humans, male and female, contain in themselves the whole universe in miniature.

If anyone thinks that my quotations from the Theologumena are from a work Etteilla could not have known, I must remind them that the work in Greek had been published in Paris in 1543--its one and only time before the 19th century (https://www.worldcat.org/search?q=ti%3A ... dblist=638), and that Etteilla claimed to have seen an "ancient manuscript" verifying his ideas. As reported in a book of 1791, with a short preface by Etteilla himself authenticating its contents (see viewtopic.php?f=11&t=1152#p18596):

[The art of drawing cards, according to Etteilla, could not be of an invention as modern as the French cards. Following an ancient manuscript, he thought it came from the 33 sticks of a Greek, who used them in Gaul to pronounce oracles and had taken or had naturally the name of Alpha.)

A printed book is not a manuscript, but the script looks, to someone used to Latin letters, handwritten enough; in any case Etteilla was not above increasing the antiquity of a text. While he certainly did not read Greek, others did, and the book was no doubt of some interest if it was printed. It is rather short, so it might well have received translation or at least vague paraphrase or summary in some small edition that has not survived. Etteilla as a purchaser of large lots at auction, for their prints, would have surely gotten the contents of some rather old libraries sold due to the financial crisis of the times. In any case basic Pythagoreanism, in various versions, was well known.

As to how this analysis of the numbers applies to his version of cards he does not say. As I've said, his first card does show a light in the formless darkness. The second card has in addition to a burning star two children. The third card has a night-time scene with a dog, a wolf, a crayfish with its claws reaching up to the moon, a river, some vegetation, and two towers. These are all things of different kinds, i.e. forms, in the world, originally only existent in the mind of God. The fourth card, besides a scene in the countryside imitating the Star card, has the sun, moon, and planets in the sky; it could represent the universe (although strictly speaking, since it has no true stars, it doesn't).

Etteilla's analysis also applies just as well to the Tarot de Marseille, it seems to me. Card 1, the Bagat, is the creator, with his objects suggesting the four elements on his table. 2 is the creation of the Bataleur's opposite number, the Popess: mature to his youthfulness, calm instead of hyperactive, representative of hidden truths rather than surface illusions. 3 is then the generation of the child, represented by the shield on Empress's knee, where the Christ child would be in a Madonna and Child painting (this child even the unification of the opposites God and matter). And the Emperor could be seen as the temporal ruler of the material aspect of the universe, the earthly representative and image of God in that world.

After card 4 Etteilla gives no further examples but goes on for several pages in general terms about the all-important role of numbers and their properties for divination.

This triangular figuration of Number 12 as 78 will also be shown by another continuator Papus, if my memory serves me right.

But, the knowledge of Pythagorean figurates numbers seems to be limitated to triangulars maybe squares at best- pentagonals no.

Etteilla if he was not the Teacher of Algebra he said he was but a "marchand d'estampes" was far from been uneducated as Eliphas Levi falsely portrait him... "un ancien coiffeur n'ayant jamais appris ni le français ni l'orthographe"

#537 by mikeh
It would be of interest to see what they say that is comparable to what Etteilla says, or what is in the Theologumena. In that regard I don't know where to look specifically. Of d'Etaples, I could find only a couple of works online, both in Latin, which I don't read--nor did Etteilla, I assume, since he never drops Latin phrases. One was on musical theory and the other was a "Rithmimachie ludus", but it might not be his, https://archive.org/stream/bub_gb__KJod ... C_djvu.txt. Are there books about these people in French or English that could say what they said about the properties of the numbers, of the type of thing that can be related to cards? Also, is there nothing later, i.e. late 16th, or 17th-18th century, in French or English (in translation, I mean)? 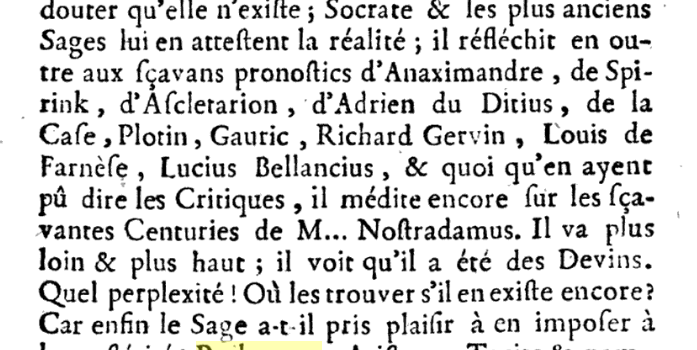 #540 by BOUGEAREL Alain
I believe that also Agrippa could also be a source for Etteilla' numerology
https://fr.wikipedia.org/wiki/Henri-Cor ... Nettesheim

Looking at the names Etteilla gives, besides those of Ancients such as Sicrate Anaximandre, Plotin Pythagoras Aristote Tacite
I see. besides the Nostradamus connection, names unknown for me but also astrologers such as


These reference and mainly the italians make me think that Etteilla did understand Italian...

Admitting that he did not understand Latin, maybe , he could also have had access at Italian translations or excepts from italians texts ...
http://www.sgdl-auteurs.org/alain-bouge ... Biographie

Users browsing this forum: No registered users and 40 guests