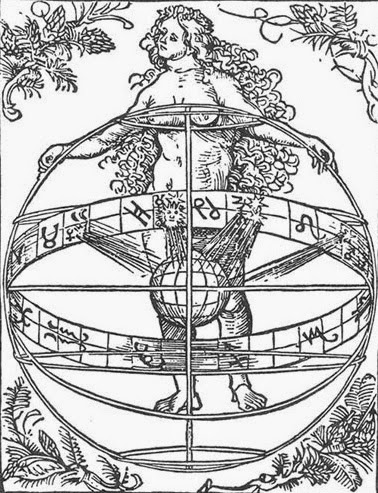 Quoting M Howard on this :

"Urania : Albrecht Dürer did an engraving of such a figure (for the Prognosticon of Johannes Stabius, 1502). Called “Urania”, the Greek word for “heaven”, also the name of the Muse of Astronomy, Dürer’s depiction comes close to that of Plato’s description of the World Soul, “interfused everywhere from the center to the circumference of heaven, of which she is the external envelopement" (Timaeus 36E).
http://www.sgdl-auteurs.org/alain-bouge ... Biographie

Isabella d'Este took around 1505 the motto "nec spes, nec metu", which means "neither hope nor fear". The suits of Boiardo deck are fear (there called Timor), gelosia (jealousy), Spes (hope) and Amor (love), four Stoic passions. The motto might reflect either the general stoic passions or just Boiardo's specific version of them.

According my own theories the Boiardo poem was written for the wedding of Lucretia d'Este, half-sister of Isabella d'Este, in January 1487. The highest trump in this poem has its focus on the Roman Lucretia, likely not accidently. Lucretia d'Este married Annibale Bentivoglio, the heir of the ruler in Bologna, and it was a very big festivity and a lot of other poets made poems for Lucretia at this opportunity.
Lucretia was illegitimate, but was treated very well in the family. She was the elder sister of Isabella, maybe 5 or 6 years older. Beatrix, the younger, was educated in Naples.

All this was rather long ago in Isabella's time. Leonello had a plan for a studiolo, Isabella got a studiolo, too. But much later.

Isabella got a Muses picture of Mantegna, when she planned her studiolo. 1497.

#264 by BOUGEAREL Alain
Lionel d'Este is a kind of Mecene for Mantegna.
Isabelle has some of his works in her litte Studio :

He had a single commission, that's all.


Isabelle has some of his works in her litte Studio :

Mantegna spend most of his life-time in Mantova. Since 1459 till his death. Isabella d'Este had married a Gonzaga and was then in Mantova (since 1489).

A little about Isabella and her cards ...
viewtopic.php?f=11&t=432
Huck
http://trionfi.com

#266 by BOUGEAREL Alain
About Timoteo Viti

Nevertheless, with all due respect to Pratesi, after reading it, it has to be revised and updated.
There are so many other topics where Pratesi is relevant ... But his vision of Gosselin is not at all of the same level as his other important and worthy contributions. Well, that's what I think.
Perhaps, M Howard shall have a different approach than mine . I don't know.

Maybe this pubLication of Franco Pratesi shall be revised? Maybe not ?
Who knows finally ... after all, 25 years is a long time and there is new data, no?
Time will say.

From my point of view, It overlooks the specific pythagorean elements of Gosselin.

#270 by mikeh
Regarding pp. 192-196 of D'Ooge's translation of Nichomachus, there is a corresponding section in Boethius, ch. 9:

He also discusses the four elements, as can be seen at

It appears that there were many such textbooks.