#1 by mikeh
The biggest problem about interpreting the iconography of the pips is that most of them don't give one much to go on. How a specific number of suit objects are arranged might be intended to mean something, or it could just be what pleased the designer. The Sola-Busca pips are a notable exception; but what principles govern the designs? In my view the key to unlocking their secrets is Neopythagoreanism, a philosophy from Hellenistic Alexandria of which several texts survived through the Middle Ages. The most important, in my view, is the Theology of Arithmetic, attributed to Iamblicus but reflecting an earlier time. This work is occasionally referred to on the Internet in connection with the tarot, but I want to use it in a historically convincing way. The Theology presented teachings deriving from Middle Platonism and natural science in a special way, in terms of numbers, in particular the numbers from one to ten. This work was not, to my knowledge, translated into Latin, snf we are fortunate that now there is an English translation. On the popularity of the text in the Renaissance, see Calenza, [Renaissance Quarterly 1999, at http://www.thefreelibrary.com/Pythagora ... a057815615. The title there is "Arithmetic in Theological Matters." The SB designer need not have known this work directly; selected quotes from each chapter would have been sufficient. Also important, to other SB designs, are Macrobius's Commentary on the Dream of Scipio and certain works by Plato and perhaps Aristotle.

I am starting with the sevens because I think the contribution of the Theology is fairly straightforward there. Here are the Sola-Busca cards, from http://www.tarotpedia.com/wiki/Sola-Busca_gallery:

What could possibly make these cards reflections of the number Seven, apart from there being seven of the suit number on each card? Well, when we look at the chapter on the Heptad in the Theology, a passage said there to be from Nichomachus stands out. It describes the "seven ages of man":

Seven are the seasons, which we call ages--child, boy, adolescent, youth, man, elder, old man. One is a child up to the shedding of teeth, until seven years; a boy up to puberty, until twice 7; an adolescent up to the growth of the beard, until three times 7; a youth during the general growth of the body, until four times 7; a man up to one short of fifty years, until seven times seven; an elder up to 56 years, until seven times 8; from then on one is an old man. (Theology of Arithmetic p. 87f.)


That these "seven ages" were well-known is evident from a famous marble tile in the pavement of Siena Cathedral, c. 1480. Here is a reproduction (not a good one but it is all I have). The ages go clockwise from the bottom left: 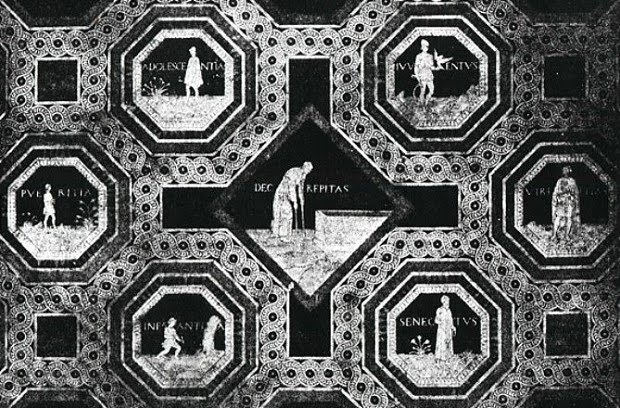 Notice that the figure labeled "iuventus" has a similar bird as the figure on the SB Seven of Coins. What I think is that the four SB figures represent four of the seven ages, with the moping young man with the bird one of them: not "iuventus" but rather the one before, "adolescencia." The bird would fit either of these "ages," but I think that with another example, we will see that "juventus" fits the man in the SB Seven of Swords.

The only other example of the seven ages that I can recall at the moment is the poem by by the melancholy Jaques in Shakespeare's As You Like It, 2.7.139ff:

JAQUES. All the world's a stage,
And all the men and women merely players,
They have their exits and entrances,
And one man in his time plays many parts,
His acts being seven ages. At first the infant,
Mewling and puking in the nurse's arms.
Then, the whining schoolboy with his satchel
And shining morning face, creeping like snail
Unwillingly to school. And then the lover,
Sighing like furnace, with a woeful ballad
Made to his mistress' eyebrow. Then a soldier,
Full of strange oaths, and bearded like the pard,
Jealous in honour, sudden, and quick in quarrel,
Seeking the bubble reputation
Even in the cannon's mouth. And then the justice
In fair round belly, with good capon lin'd,
With eyes severe, and beard of formal cut,
Full of wise saws, and modern instances,
And so he plays his part. The sixth age shifts
Into the lean and slipper'd pantaloon,
With spectacles on nose, and pouch on side,
His youthful hose well sav'd, a world too wide,
For his shrunk shank, and his big manly voice,
Turning again towards childish treble, pipes
And whistles in his sound. Last scene of all,
That ends this strange eventful history,
Is second childishness and mere oblivion,
Sans teeth, sans eyes, sans taste, sans everything.

The seven ages also correlate with the seven planets, from the Moon to Saturn, as is evident in Jaques' speech.

Shakespeare's image for "adolescencia," the third age, of Venus, is different from the card's--he has a lover writing sonnets to his girlfriend--but there is the same "woeful" look.

For the fourth age, Juventas and Mars, we have just such a soldier as Shakespeare describes, "seeking the bubble reputation even in the cannon's mouth": the SB card has a young man running, with four swords on his back and three more in his hands. I would guess that he is either about to attack or is leaving quickly with his booty after a raid.

For the second age, that of Mercury, Shakespeare has a schoolboy with his "shining morning face." There is just such a bright-eyed, alert, eager boy on the SB Seven of Cups, standing confidently on his cup. Admittedly, when looked at closely, his face is not as shining as one would hope. That may be due to the painter, as opposed to the engraver, not grasping the point. In any case, we are dealing with a metaphor, for an attitude associated with late childhood that can occur at any age; and the same is true for the other "ages" depicted.

(The letters he is running over, SPQR, stand for "Senatus Populusque Romanus ("Senate and People of Rome"), an abbrevation associated with the Roman Republic (per Wikipedia). They are not part of the engraving, before it was painted; I think they are meant for the painter's patron, probably a citizen of the Republic of Venice. As Zucker (Illustrated Bartsch, Vol. 24 Part 3, p. 66) points out, Trump XV has SPQV on Metelo's shield, the same abbreviation except referring to Venice.)

Our fourth SB card, the man bending double under his load, corresponds to Shakespeare's sixth age, of the "shrunk shank" and high-pitched voice; he is not the man he used to be.

As far as I am concerned, the meaning of the SB Sevens is now clear. They are four of the seven ages of man, omitting the first, last, and the long one from age 28 to 49. They also might be meant to suggest the four temperaments: a sanguine boy, a phlegmatic adolescent, a choleric youth, and a melancholy elder. And they are not literal stages, but metaphorical ones, at any time of life: aspirations, frustration and delay, realization, and knowing when to take it easier.

But the SB cards have become more than an obscure curiosity of history. It is common knowledge that Waite and Smith used some of the SB pip cards in designing their 20th century best-selling deck. What is not realized, I think, is the extent of their borrowing. Here are their sevens:

As you can see, Swords is a near-copy. But I think Pentacles also reflects the SB Coins, in that it shows six plus one coins and a young man who might be moping, thinking he deserves more respect and responsibility. The other two Waite-Smith cards have much the same spirit as their SB equivalents: in Cups, a young man with visions of possibilities, rather like the proud, optimistic boy on the card; and in Batons, a man outnumbered by his opponents, in danger of succumbing. However Waite says that the man's position is not as bad as it looks, since he holds the high ground. I am not sure that is the message of the sixth "age of man."

Waite, of course, was interested in divination, and in giving the cards have a positive spin if possible. We wouldn't want people going away doubting themselves! I am not sure what the SB was used for, besides a trick-taking game and amusement at its bizarre images. But it would be easy enough to engage in divination using the SB interpretations that I have suggested. And Pythagoras was at that time associated with divination. For example, there was the "Wheel of Pythagoras," in which one asked a question and the fortune-teller did a number-letter correlation for one's name or birthplace, added the numbers, and looked for it in the center of the card; if the number was on the top half of the card, the answer was yes; if not, no (Heninger, Touches of Sweet Harmony: Pythagorean Cosmology and Renaissance Poetics, p. 238; the Image was originally in Christophe de Cattan, The Geomancie, trans. Francis Sparry, London 1591, but according to Heninger the "wheel" is from Venice a century earlier.) 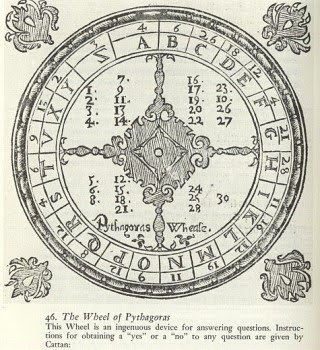 Moreover, I notice some correlation between these four SB cards thus interpreted and the word-lists attributed to Etteila (from which Waite, 1910, borrowed heavily), as found in Papus's La Tarot Divinatoire, 1909, and posted by James Revak at http://www.villarevak.org/td/td_1.htm. I have not found in Etteilla's actual writings anything corresponding to these lists. For Cups, the "Etteilla" words are:

Especially in the Reversed, many of these words have to do with a life, or part of a life, not yet realized, just as the second "age of man" in fact is. It is no wonder that Waite borrowed extensively from the "Etteilla" words (see Revak website) as well as the SB pictures. They fit each other. On the other hand, the words are so various and general that they could apply to other SB images, including the SB Seven of Coins next to it (but not, I think, to the other two).

For Coins, the "Etteilla" has:

The second group of words, beginning with whiteness, fits the SB's adolescent with the falcon and coins well--or, for that matter, the boy on the cup; the Reversed meanings, however, fit the adolescent alone. (Revak has "ingenuity" in brackets after "Artlessness"; in Papus's French, the word is ingénuité, ingenuousness. As someone has pointed out, Waite mistranslated Papus and gave "ingenuity" as one of the words associated to this card.)

These words could fit any of the four. In fact, some are already in the list for Cups. But they do apply to a daring venture, such as a raid, a plan that is successful in the Uprights, but perhaps not in the Reversed.

The words of the "Ettellia" Batons do not fit the SB card at all--or any of the ones before us--at least in the negative sense of not being able to cope with the tasks that one used to be able to manage:

But if the sixth age is construed more positively, as a time for talking and negotiating rather than fighting, perhaps these words fit after all. I am reminded of a line at the end of the film Lawrence of Arabia, where Alec Guinness, playing Prince Faisal, tells Peter O'Toole, playing Major Lawrence:

There may or may not be a causal connection between the SB Sevens and the "Etteilla" word lists. The match-up is not as close as one would like: perhaps the similarities are coincidence; or perhaps the differences are the inevitable distortions, misunderstandings, and modifications after centuries of oral transmission and use.