robert wrote:To me, it looks like an addition after the card was designed. Most Tarot de Marseille have an area set aside for a title and number. This looks like an afterthought, the image is not disturbed, the number put in the "border" area. I believe the image existed alone, and then the number was either added by a later printer into the border area, or added by hand, but I don't believe it is part of the original design.

I couldn't see any indication of that, but of course it might be possible. I'll have a better picture up momentarily, if you have a few minutes.

by robert
I was probably not clear enough. The number might be added by hand on this, or it might be printed on this, but I believe that the way the number is tucked into the border area rather than in its space (like typical Tarot de Marseille), or squeezed into the image (like Vieville), indicates that the image existed on its own, the number was added at some point in its history into the border. If in the past, then this printer might have simply copied it, but it is not integral to the image. 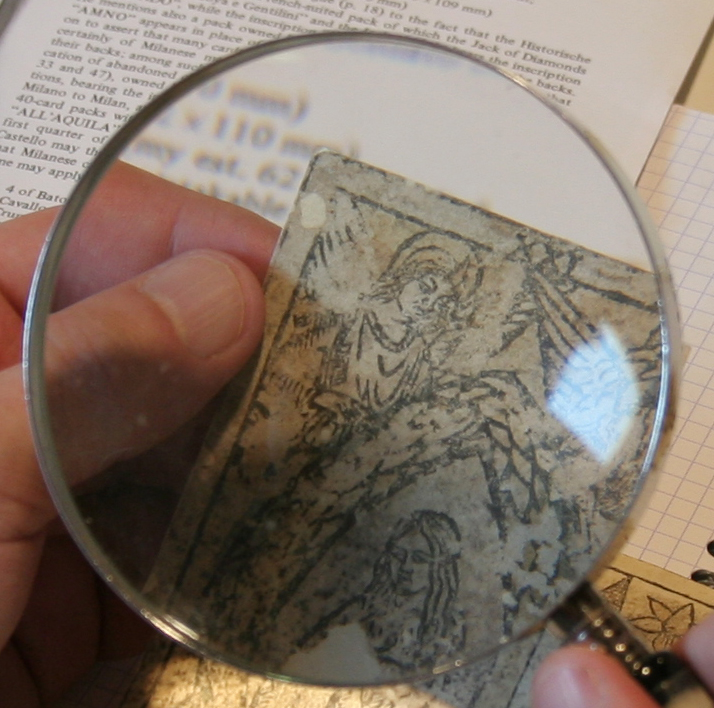 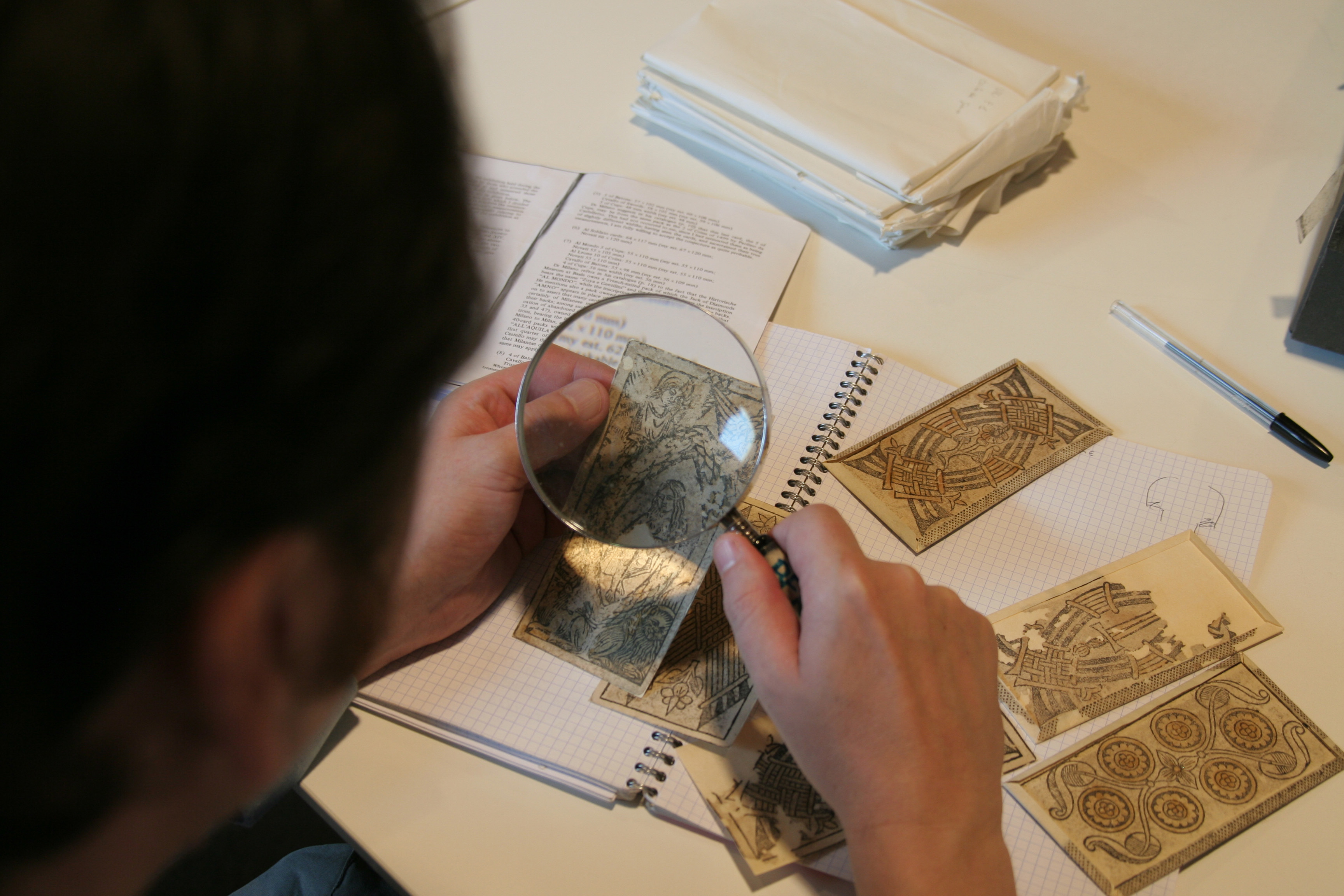 robert wrote:I was probably not clear enough. The number might be added by hand on this, or it might be printed on this, but I believe that the way the number is tucked into the border area rather than in its space (like typical Tarot de Marseille), or squeezed into the image (like Vieville), indicates that the image existed on its own, the number was added at some point in its history into the border. If in the past, then this printer might have simply copied it, but it is not integral to the image.

I'm not sure - really. That would imply that the players or cardmakers wrote it on sometime afterward. But cards did not last long, and players knew what card ranked what, so it can't be some heirloom that needed clarification. Cardmakers would have placed it on there, if it were needed.

If by "integral" you mean carved, then perhaps (or perhaps not); but if you mean "not primary" - i.e. that it was not done in the shop, then I think there is no way to be sure, and I can't think of any good reason why not.

Technically, the numbers and the rest of the lines in the image are of identical weight. There is no indication of them being of different inks or different methods of impression.

That it is in the "border" area is the issue. It is separate from the image, and the placement in the border indicates to me that it is an addition, and not part of an original design. The Tarot de Marseille... Noblet, Conver, Dodal... all of them, have created a title and number area on thier cards, the Sforza Castle doesn't have one. Vieville doesn't have one either, but when the numbers were added to Vieville, they were added into the image. On the Sforza Castle, they were added into the border.

That's what I think, at least.

by marco
The comparison with the Sun in Kaplan II p.296 is interesting, thank you for pointing it out, Ross. From what I can see, in the Sun card the number seems to be enclosed in a box at the top of the card, as in most Tarot de Marseille decks.
This XXI is different. Maybe, following Robert's observation, the fact that the box is missing could suggest that numbers had been recently added. Possibly the card was copied from an unnumbered original and the engraver added the number at the top.

About the group of cards to which the Sun belongs, Kaplan writes that "Sylvia Mann, according to Michael Dummett, dated the cards circa 1700 due to the back designs, which are borderless and do not fold over the fronts of the cards".
Should we conclude that also the World card is so late?

I attach the result of some more processing of Ross' image. I have tried to reduce the effects of the curvature of the card: "unblurring" the lower part and increasing the width in order to get a better overlap with Depaulis' image.

by Ross G. R. Caldwell
Thanks for the great work, Marco! It is a real improvement.

Here is the best one I have of the Sun - 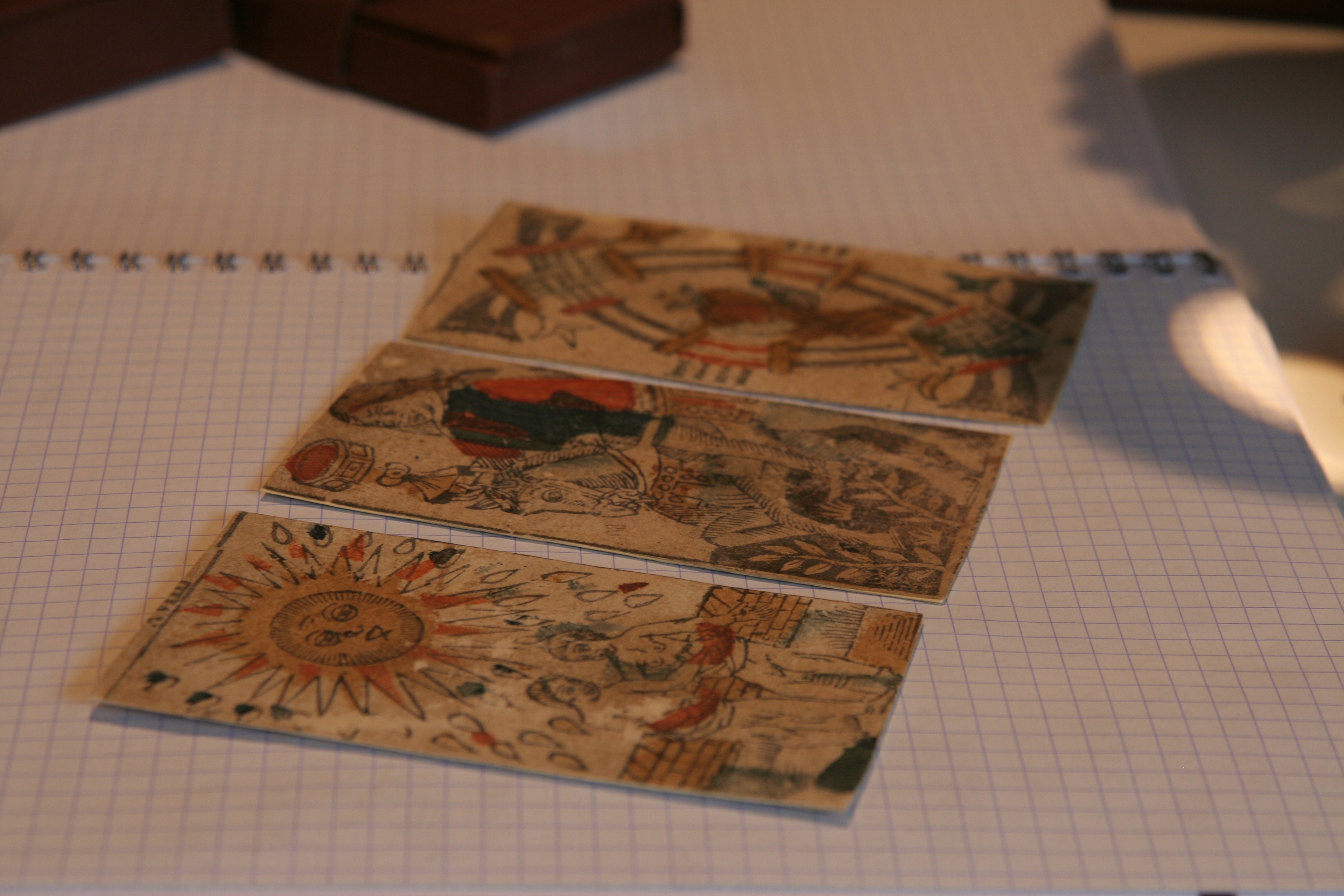 The number is printed on, but the top has been cut off. The yellowness of the ambient light is very strong in the photographs, and the back of these cards was plain yellow (perhaps these ones had recently glued backs too - I'll have to see if I noted it), which reflected off of the white paper beneath (sorry, I mean it is clearly an artifact of the lighting conditions and my camera).

Here's another one, but blurrier - 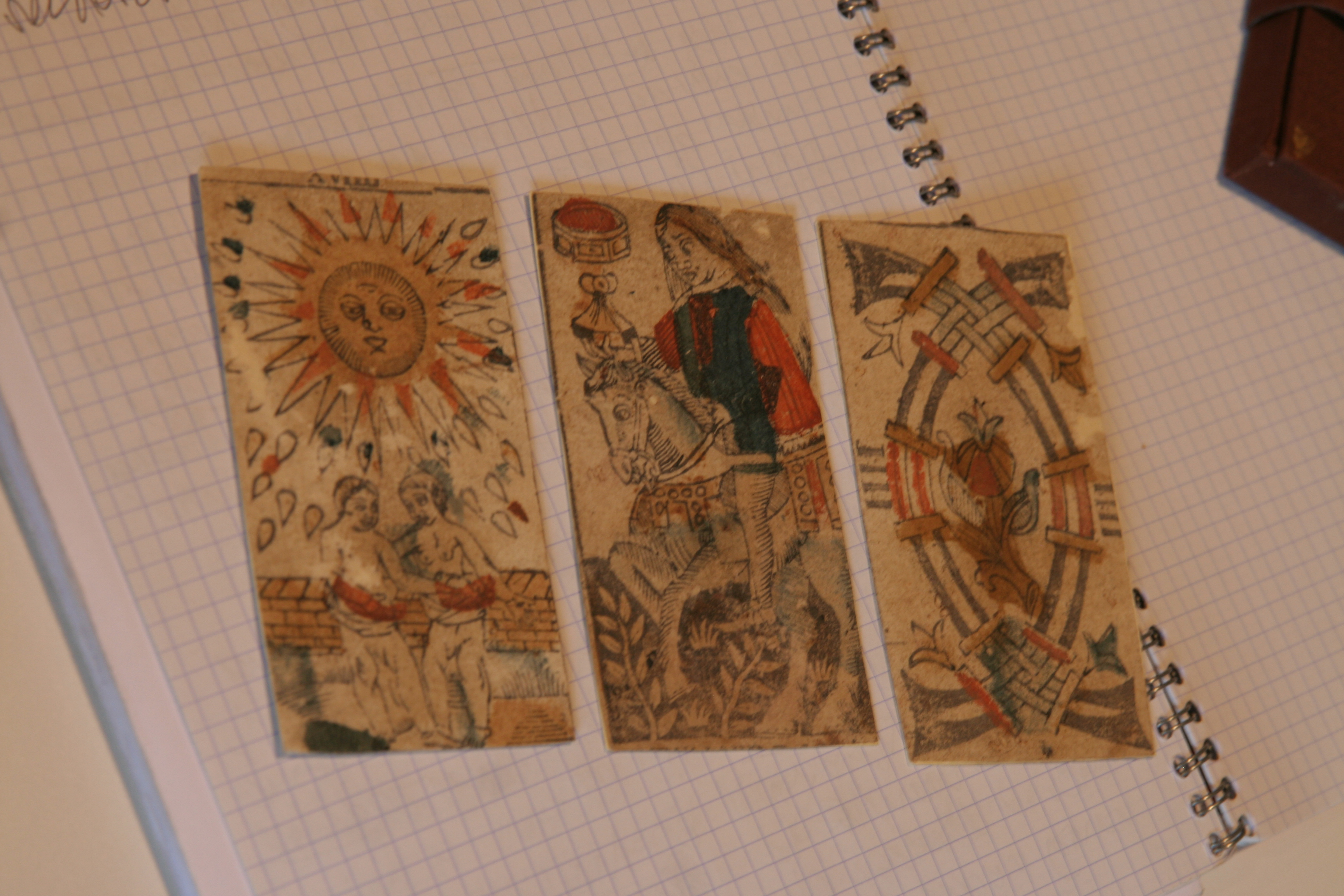 by marco
Thank you for the new photographs, Ross. The Sun card has been cropped so much that it is now impossible to tell if the number was in a box or just above the border.

Coming back to the World card, it almost seems that the person is bearded. Do you have this impression too? This would be one more detail in favor of the identification with Jesus. In any case, I cannot think of any other meaningful candidate

by Ross G. R. Caldwell
I can't make up my mind about the beard. The line next to the nose might be a very fine moustache, as the beard itself would be a thin frame around the face - normal in portrayals of Jesus, so he doesn't look like a Patriarch.

The absence of a halo is a nagging doubt, but isn't enough to overturn my belief that it must be Jesus. 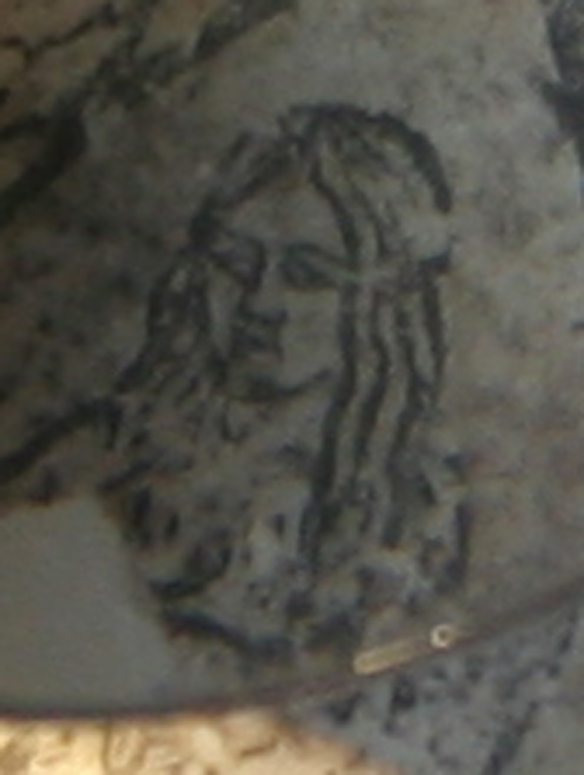 by robert
I'm not sure if there is or isn't a halo. If so, it's not as clear as the other halos, so why not? Hard to say.

But I do think it is Jesus. If not Jesus, then I'm leaning more towards "a soul".
All times are UTC+01:00
Page 9 of 19
Powered by phpBB® Forum Software © phpBB Limited
https://www.phpbb.com/