According to various descriptions of the painting they are said to represent Justice, Constancy, Clemency and Peace, as per the same four virtues in Strozzi's poem the Borsiad. But the Lady on the left seems to me to be temperance with the two jars, third from left has the sword and scales of Justice, the second with her club/mace could certainly be fortitude, and the one on the right could be prudence, if that is a compass she is holding.
Immature poets imitate; mature poets steal; bad poets deface what they take, and good poets make it into something better, or at least something different.
T. S. Eliot

#172 by Huck
Well, there is some description of the triumphal festivities outside, which I don't know. Perhaps Ross knows more, he had studied these earlier, I remember. Anyway, the painter might have followed his own ideas, ignoring the complex plans of the Trionfi organisators.

It's a pity, that we don't have other pictures of this event.
Huck
http://trionfi.com
SteveM
SteveM

"The humanist Gaspar de Tribraco 'Trimbocchi was born in Reggio Emilia in 1439, was a master of grammar at Modena and then the Este court where in 1458 he learned from Guarino Veronese and as a writer in 1466 read "poetry"; He was a friend of Boiardo and Strozzi; perhaps he died in Mantua in 1493 and left in addition to this Triumph of Borso, several poems and Satire. Tribraco wrote the text in 1463, when Borso was about the crusade that ended with altarpiece with the death of Pius II. A Borso course Tribraco dedicated the poem in hexameters, whose theme is the triumph of the Duke and the exaltation of his virtues including especially liberality. The decoration, in the past generally refers to an illuminator near George of Alemagna, was recently assigned to the hand of Bartholomew of Dyer, an artist working in Bologna, but also to Ferrara. The decoration consists of a frieze whose characters refer to the miniature flourished under Borso, while the cartoon takes the iconography of the triumphs which spread mainly through the illustration of illuminated manuscripts of Francesco Petrarca: in particular the model for the Triumph of Borso of c.1r has its prototype in "Triumphs" ms. 141 Library Casanatense Rome made for the family Zambeccari Bologna by the same miniaturist. The theme here is Petrarch interpreted in a sign courteous and everything for the exaltation of the Duke of Ferrara."

There is a colour version on pinterest, but it is small:

https://jp.pinterest.com/pin/4424083633 ... =175&h=237
Immature poets imitate; mature poets steal; bad poets deface what they take, and good poets make it into something better, or at least something different.
T. S. Eliot

#175 by Huck
I found at this cassone page ...
http://www.flickriver.com/photos/centra ... s/cassone/
... four side pictures with virtues (it seems, that they all are together), from which 3 look normal and the fourth has similarity to the unusual virtue Fortitudo shown at Borso picture: 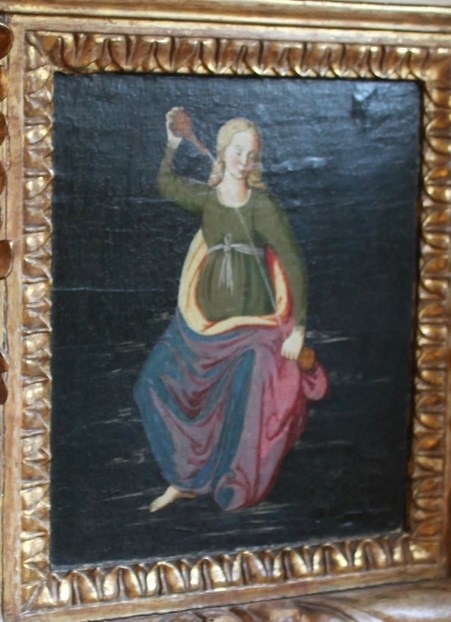 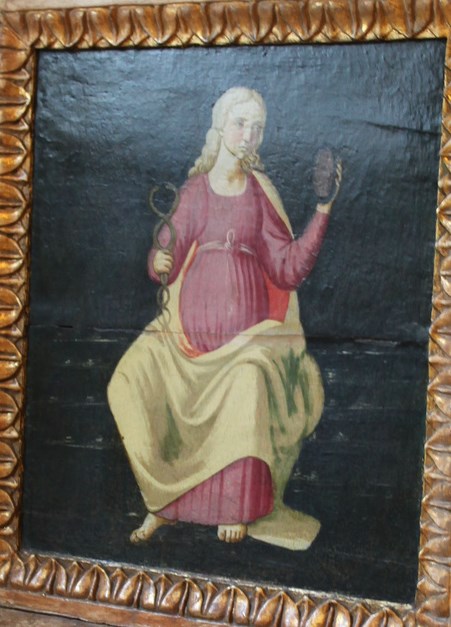 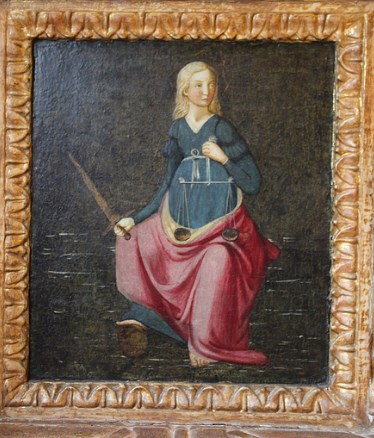 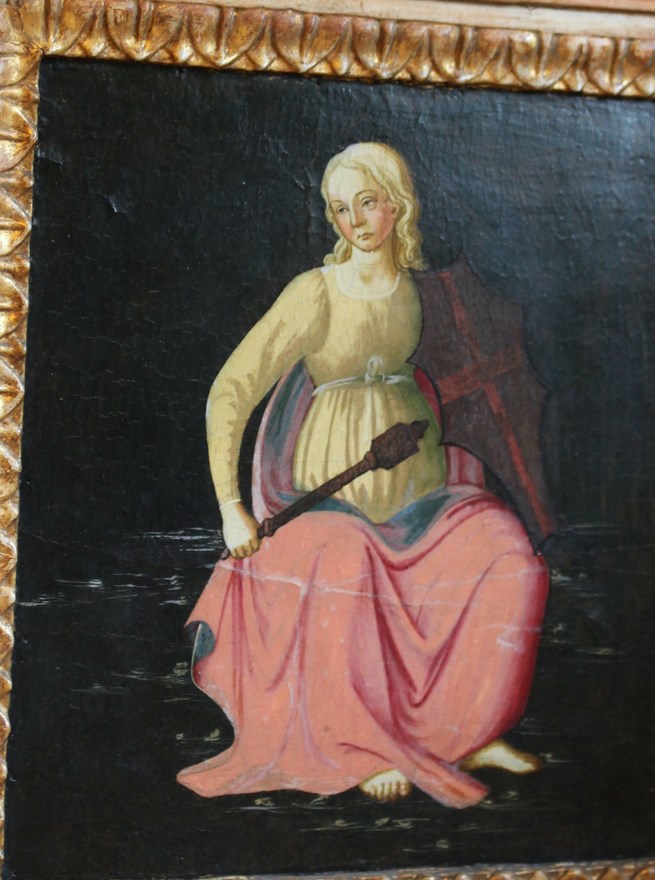 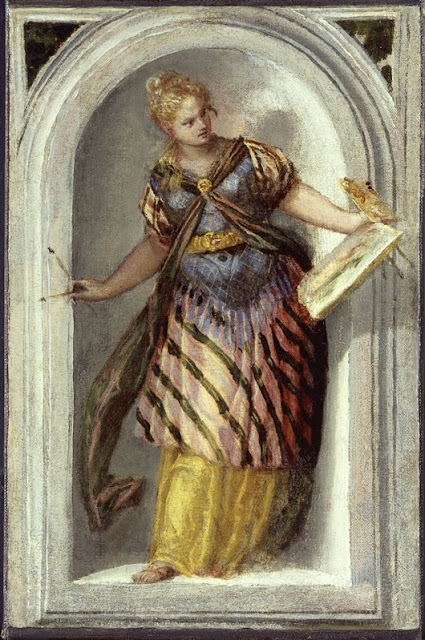 #177 by Huck
From alchemy book
1557 in the possession of Emperor Charles V. 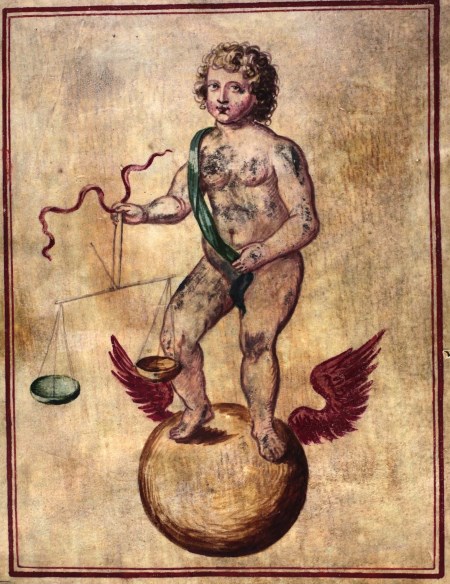 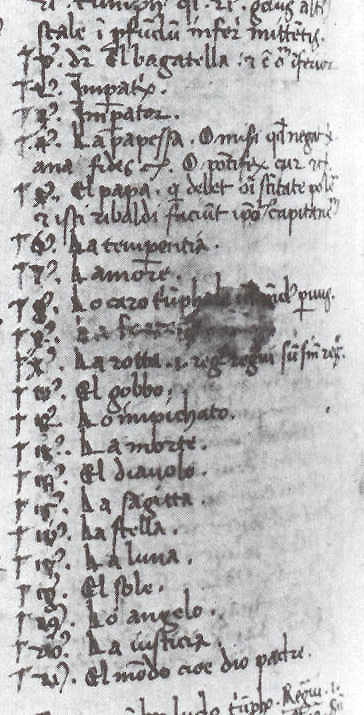 Which by my reckoning translates to "The Way (i.e. Father God)"

So thinking of this card as "world", from 'mondo', could be a mistake when in fact that word is clearly "modo" meaning 'way'

Looking back at some of the oldest examples of this card we see angels or cherups, the divine hands of God, holding up emblematic pictures of 'The Way' - idyllic scenes of tranquility and safety. This scene of 'The Way', sometimes held up above the head or pointed to below was presented as a picture often on a round canvass. ..a round canvass that was later to morph into the World and to be stood on by figures that were now less angelic.

Personally I have thought about this for many years and I see 'The Way' in it's deepest representation as The Creation. Yah establishes!