#161 by Huck
Interestingly the picture with the three holy kings in theological colors ... ... belongs also to Ravenna and to the 6th century


On the upper band of the left lateral wall are 13 small mosaics, depicting Jesus' miracles and parables; and on the right wall are 13 mosaics depicting the Passion and Resurrection. However, the flagellation and crucifixion are lacking. They describe the parts of the Bible that were read aloud in the church during Lent under the rule of Theodoric the Great. On the left, Jesus is always depicted as young, beardless man, dressed as a Roman Emperor. On the right, Jesus is depicted with a beard. For the Arians, this emphasized that Jesus grew older and became a "man of sorrows", as spoken of by the prophet Isaiah. These mosaics are separated by decorative mosaic panels depicting a shell-shaped niche with a tapestry, cross, and two doves. These mosaics were executed by at least two artists.

The next row of mosaics are a scheme of haloed saints, prophets and evangelists, sixteen on each side. The figures are executed in a Hellenistic-Roman tradition and show a certain individuality of expression as compared to the other figures in the basilica. Each individual depicted holds a book, in either scroll or codex format, and, like many of the other figures throughout the basilica, each of their robes has a mark or symbol in it. These mosaics alternate with windows. They were executed in the time of Theodoric.

The row below contains large mosaics in Byzantine style, lacking any individuality, having all identical expressions. These were executed about 50 years after the time of bishop Agnellus, when the church had already become a Catholic church. To the left is a procession of the 22 Virgins of the Byzantine period, led by the Three Magi, moving from the city of Classe towards the group of the Madonna and Child surrounded by four angels. To the right is a similar procession of 26 Martyrs, led by Saint Martin and including Saint Apollinaris, moving from the Palace of Theodoric towards a group representing Christ enthroned amid four angels. This lower band, containing a schematic representation of the Palatium on the right wall and the port of Classe with three ships on the left wall, gives us a certain idea of the architecture in Ravenna during the time of Theodoric. In another part of the church there is a rough mosaic containing the portrait of the Emperor Justinian. 22 Virgins led by 3 Magi is rather funny, considering our recent discussions ... :-)

For Cologne we have, strange enough, ...

3 crowns for the "3 Holy kings", and 11 flames for "11.000 virgins", which actually once had been 11, which accompanied St. Ursula (who possibly was one of the 11).
During a city extension at begin of 12th century, when building new city walls, a Frankish burial place was detected, and the first bones were "recognized" as the bones of the 11 virgins. With further extensions some more bones were discovered, and to save the logic of the earlier discovery, the earlier number was a little bit extended to 11.000, which proved to be a wise decision, cause the city of Cologne had now a lot of "holy relicts", which they could sell to other regions with "relicts interests" ... :-) ... so I was told by my friend Rainer, who had studied this topic a little bit during some beers in the evening.

English Wiki has the story a little bit different ...
http://en.wikipedia.org/wiki/Saint_Ursula

If one considers the 11 virgins as "10 + Ursula", then one would have the idea of the 5 wise and 5 unwise virgins ... these were an iconographic topic in Germany around 1500, often presented.
Huck
http://trionfi.com

#162 by marco
A printer's device featuring Truth and the symbols of the four Evangelists (Venice, 1604, from Le orationi volgari di Luigi Groto):

The Ascension of Jesus (from a 15th Century German engraving illustrating the Creed):

ascendit.png
(1.01 MiB) Not downloaded yet

#163 by marco
With reference to the Visconti-Sforza World card: the Heavenly Jerusalem (Ierusalem Celestis) from a manuscript of the "Liber Floridus".

#164 by Pen
Apparently this painted ceiling in the Heaven Room of Bolsover Castle depicts a dancing Jesus ascending to Heaven - complete with red shawl.

Pen wrote:Apparently this painted ceiling in the Heaven Room of Bolsover Castle depicts a dancing Jesus ascending to Heaven - complete with red shawl.

I don't have too much time these days, but couldn't resist posting here when I came across this one.

PS. Just found a larger one and changed the link in my first post.
He's not the Messiah, he's a very naughty boy...

#167 by Huck
Heaven Room, Bolsover Castle
Some other perspectives on the object ...
https://www.google.de/search?q=Heaven+R ... CAYQ_AUoAQ


Phaeded wrote:
Another precedent of Prudence-with-world, ironically from Ferrara, and indicating the whole world:

I stumbled about an old thread yesterday. which is a detail of this cassone, a chest, from 1452 (please excuse the crease, my book was screaming for mercy):

For Borso, I only have this b/w image - I have seen it in color, but I forget where now:

One doesn't recognize much at Borso's picture ... ... I assume, that the both astronomers present Toscanelli (who worked for the Medici) and Regiomontanus.

btw I wonder, what sort of astronomical tools are presented on these Mantegna Tarocchi pictures: 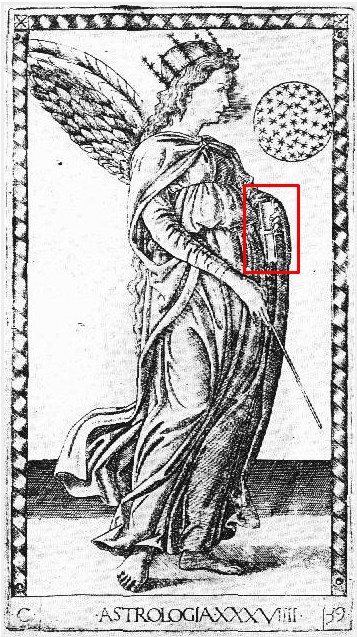 ... possibly a book in both cases.
Huck
http://trionfi.com