#131 by debra
You think the PMB and Mantegna images are similar? I don't.

#132 by Lorredan
I know this is the World thread- but the earliest Image in Italy of an Hourglass is this one as the symbol of Temperance.(Goes to what Ross said about a clock)

Then you have the PMB and the new artist of the 6 cards makes another form of Temperance- one that is more easily undertood.
What does this make of the origianal Hourglass held by a wealthy aged Man- not a misere, not on crutches and not holding a lantern?
The Old and New Testaments emphazies Temperance as a Core Virtue with self control and forgiveness as central to the theology of it.
What do you make of the sequence with this aspect explained?
It also had the aspect of Inversion and next to the WOF (we suppose) one means up and down in Fortune, and Inversion as something we control.
~Lorredan
The Universe is full of magical things patiently waiting for our wits to grow sharper.
Eden Phillpotts
mikeh
mikeh

#133 by mikeh
Debra: If you don't see the "Mantegna" Saturn as similar to the PMB Old Man, it's not that important. My main point is that you don't need an hourglass for an old man with a cane to represent Time. Actually, he is different from Saturn, in that he is not the all-devourer, but an example of Time's victims, a person in the process of physical decay and headed toward physical oblivion, much as Petrarch sees Time's effect on Fame. I personally think, with Panofsky, that the idea of using an old man with a cane to represent Time is related to the ancient/medieval equation Kronos = Chronos. Cohen doesn't agree; she says (p. 306) that

The image of the elder with its connotations of suffering and decline was naturally associated with speculations on time in all periods.

That is indeed the main point: even without the hourglass a Vecchio on the card is still Petrarchan Time, especially in the context of the other Petrarchan Triumphs.

Lorredan: By 1450, the hourglass had "long ago" stopped being used as an attribute of Temperance in favor of the clock, according to Cohen in the quote Ross provided (actually I don't think it could have been very long before, given when it was invented). The clock is a better symbol of Temperance, as an example of good regulation of working parts. The lady pouring from one vessel to another was already for quite a while a conventional symbol of Temperance, in medieval representations of the virtues.

#134 by marco
A XVI Century Persian illumination representing the universe (aka Il Mondo) surrounded by the tetramorph:

#135 by Lorredan
Hi Marco- I am not sure that your image is one of Il Mondo. I think it is The Firmament held up by the four fixed stars of Aldebaran, Regulus, Antares and Fomalhaut. I used to know their ancient names, but Aldebaran is the eye of the Bull (Taurus) in the East, Rugulus the heart of the Lion (Leo)in the North, Antares is the eye of the Eagle (Now Scorpio) in the West and Fomalhaut is the mouth of the fish in the South; from this the tetramorph of the four apostles was taken and fitted very well. It origianlly explained the dome of the Sky as where the Gods lived.
I love the image- thanks for posting it.
~Lorredan
The Universe is full of magical things patiently waiting for our wits to grow sharper.
Eden Phillpotts

Lorredan wrote:Hi Marco- I am not sure that your image is one of Il Mondo. I think it is The Firmament held up by the four fixed stars of Aldebaran, Regulus, Antares and Fomalhaut. I used to know their ancient names, but Aldebaran is the eye of the Bull (Taurus) in the East, Rugulus the heart of the Lion (Leo)in the North, Antares is the eye of the Eagle (Now Scorpio) in the West and Fomalhaut is the mouth of the fish in the South; from this the tetramorph of the four apostles was taken and fitted very well. It origianlly explained the dome of the Sky as where the Gods lived.
I love the image- thanks for posting it.
~Lorredan

Somehow it's "World" as a sort of highest astronomical level ... 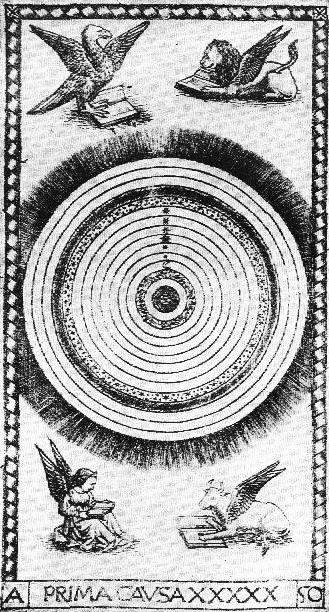 ... in consideration, that the row of lightning, Star, Moon, Sun (escalating lights) should escalate with the last cards. 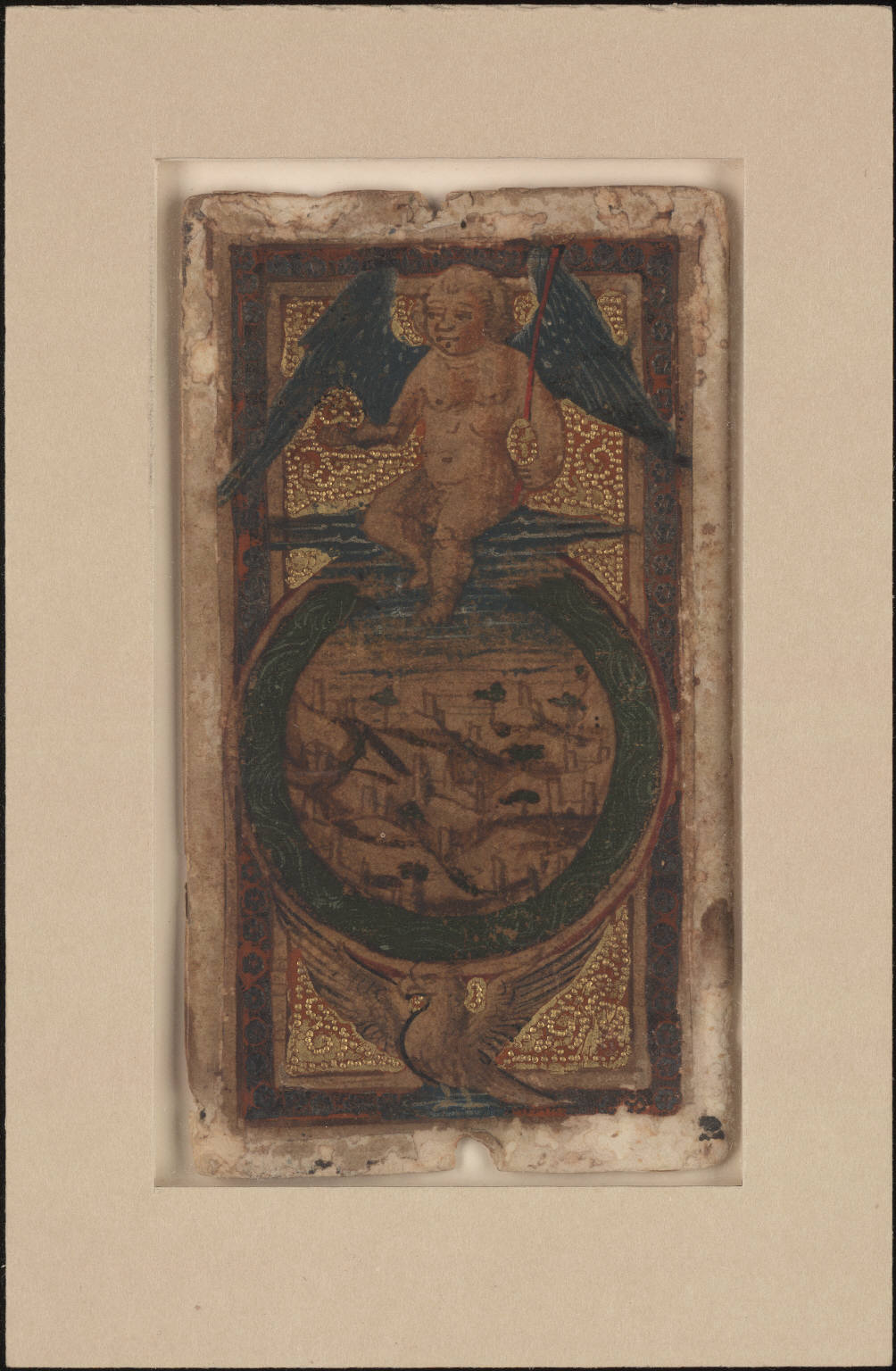 I've seen pre-printed book decorations at pages, which writers filled with words and painters filled with colors. The decoration places for heraldic was left free (not pre-printed) ... very practical, the owner of the book could fill it with its own design and his "personal-fame-attributes".
The same principle you could use for cards. Already Malatesta in 1440 had place for his personal heraldic. The natural result were "personal-fame-cards", not cosmical principles. It was just the choice of the buyer, what happened. Naturally. He paid for it. If you have special wishes to design your personal triumphal chariot in the modern world (I speak of your car), you also can pay for "Sonderausstattung" and you will get what you want, it only takes money.
In the case of the surviving very expensive cards we can't judge, if we have just a private "Sonderausstattung" or a type of cards, which was repeated 100 or 1000 times.
So in the case of the Alessandro Sforz cards we've a private "Sonderausstattung" for some cards, others follow a Florentine prototype (Charles VI)

I would consider, that in the expensive early period "Sonderausstattung" with its mainly hand-painted cards had a good part of the market, more than in the later time. So somehow it would be natural, that at begin of the development the Fame cards dominated.
Huck
http://trionfi.com

#137 by marco
There is a pattern in World cards that has been quite successful during the centuries: an allegorical figure on the top of a circular image. I propose here a few examples, without any intention of being exhaustive. The allegorical figures vary a lot:

The fact that some of these allegories hold a globe is meant to signify the dominion over the world of the principle represented by the allegory. As clarified below, the same concept is also implied by the fact that the allegory stands on a circular image.

The circular figures are somehow less variable and can be classified in three families:

In these categories there are variations. For instance, the globe in the Tarot de Paris actually is a Globus Cruciger, in the Minchiate Etruria, it is a realistic representation of the world.

All these circular object are meant to represent “Il Mondo”. That a circle can be a good representation of the universe is also implied by the images in which God's tool for the creation is a pair of compasses (see this image posted by Robert). As recently pointed out by Ross, “Mundus” can be translated both as “the world” and as “the universe”. In the Medieval and early Renaissance concept of the Universe, the World was at the center of the Universe, so it could be used as a symbol of it. And a single landscape or scene could be used as representative of the whole World, as in this XV Century painting or this 1507 manuscript: a specific subject is selected as relevant and used as a symbol of the whole world (surrounding it with a more or less complex frame that represents the spheres of the elements and of the planets).

The Minchiate Etruria/Al Leone (both dating to the XVIII Century) provide a good example of how different representations of the World could be interchanged.

In all cases, the overall meaning of the card is the illustration of a (metaphorically and graphically higher) principle that informs the world, somehow defining its essence.
This pattern existed independently on tarot, see for instance this representation of God in the Nuremberg Bible(1493) (brought to my attention by Michael J. Hurst). Or this XVII Century statue of Fortune in Venice.

#138 by Huck
Well, the circle is often and dominant.

But just the both oldest (Cary-Yale and PMB) diverge from the figure on top of the cycle, Cary-yale hasn't the circle, and PMB has two Putti holding the circle. 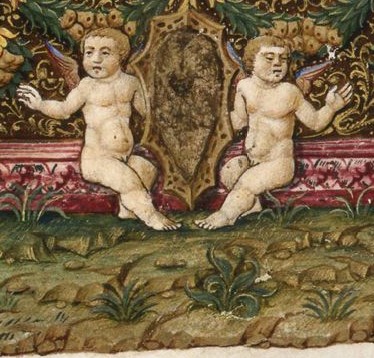 1478: two putti holding a shield. This might have been quite common.
Huck
http://trionfi.com

#139 by marco
I think that in order to understand the PMB and CY World cards it is useful to first understand the more typical and common “allegory above circle” pattern. So, I hope that my previous post was clear enough.

Once it is clear that the circle represents the world, the Pierpoint-Morgan Bergamo card becomes simple enough: since in this case the World is in the upper half of the card and it is held by two angels, it is a higher world, the “other” world, to which Jesus referred when he said: “My kingdom is not of this world”. In particular, since the heavenly World is represented by an idealized hexagonal city, the subject can be described as “the new Jerusalem”. This simple interpretation has been proposed, for instance, by Moakley, Kaplan, Place and on Andrea Vitali's website.

Some images that maybe could help in the interpretation of this card:the Heavenly Jerusalem from a XII century manuscript, the city of God and the city of Satan (1490), a XVII century engraving representing Augustine's City of God.


The Cary-Yale World card is a variant of the “allegory above circle” pattern. But in this case the world is not represented by a circle, but simply by a landscape. I attach an image that was pointed out to me by Michael J. Hurst: the title page of the “Cosmographia” by Sebastian Munster (1544). The image illustrates the Creation of the World and the World is represented by a landscape. God is represented in a way very similar to the allegory in the CY card: the blue “waves” between the CY allegory and the crown are clouds, as those that encircle God in Munster's image (slightly more naturalistic clouds, that make evident the meaning of the CY waves, appear in this engraving by Duerer).

A third example of the “allegory above landscape” pattern is the so-called Mantegna Tarot “Geometria”.

In this case the landscape represents the world as “planet earth” (ge): the object of the science of geometry. Once again, we have clouds under the allegory.

So, the pattern we see in these three images (CY world, Munster's creation, Geometria) is:
* the upper part of a human figure representing an abstract concept
* a layer of clouds
* a landscape representing the world

#140 by mikeh
Other examples of the same principle, it seems to me, are the cassone paintings of the Triumph of Eternity, which show on top heaven, then an arc of the sky, sometimes with names of the planets written in, and then a landscape with land, rivers, castles, etc. below, as can be seen in these collected by MJ Hurst: http://commons.wikimedia.org/wiki/Petrarch%27s_triumphs. These are all 1442 and after, but they are probably drawing on an earlier tradition. I can't think of any just like them, but another way of conveying the same idea was in the illuminations of Sapientia or Humilitas on top, with arms outstretched, and people, Christians in the world, below.