debra wrote:That's a really good scan. Where is it from?

In many of these cards, elements of the figures are covered with gold leaf. It makes seeing what's really there quite difficult.

The pictures are better than any facsimile I have seen of these cards, although for the Pierpont Morgan Bergamo deck (i.e. the Visconti-Sforza) they are not complete. But it is the only place where full size colour pictures of the entire 48 remaining cards of the Brambilla deck can be found.

by Lorredan
Yes the gold trellising makes it unlikely even though the gold goes over cord as well-which is a bit odd.
I have Allesandro Bellenghi's 'Book' Cartomancy and there is a full page half card image of the Moon and it looks amazingly like an apple and the only place where the rubbing is so accurate and unpatchlike.I guess that is where
one's thumb might be, if holding a hand of cards.
Great scans and thank you.
Is there a Hermit in your brochure?
~Lorredan

Lorredan wrote: Is there a Hermit in your brochure?
~Lorredan

Unfortunately, no. She shows 17 of the trumps, but not that one. What is the detail you need?

by Lorredan
I want the Hermits left shoulder, by his neck about half inch below his hair and by the collar -like detailing.
That would be fantastic if it were possible.
~Lorredan 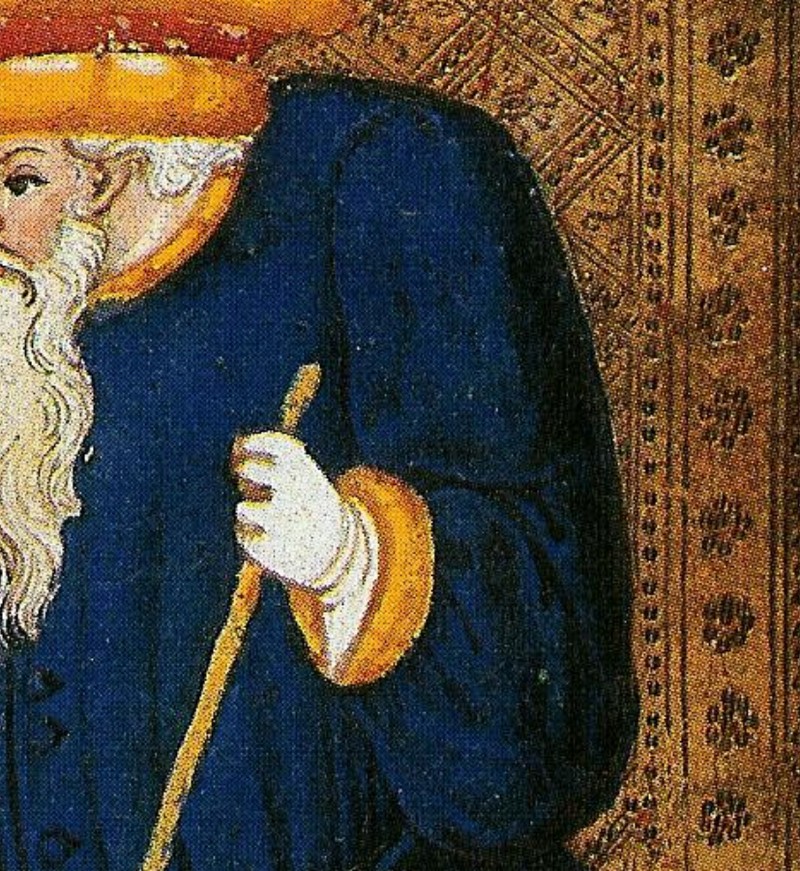 by Lorredan
Besten? dank- ist dies sehr hilfreich Huck !!!!
Now wrong thread- but that Button that we can see on the forum's header on the hermit's shoulder is more apparent than the apple of the Moon- I guess it is part of the design, and looks like a Francesco Sforza policy of tolerance towards the Jews.
It was called a "O" badge/button- not oval like the French badge and much smaller, and Sforza allowed it be discreet and blue, (When he was in the Marche) but if not worn no prosecution followed- nor did he charge the Jews for wearing it- the levy...cheeky lot down at the Church.
Sforza and Cosimo Medici were pretty incensed over the prosecution the Jewish Banker Salamone, whom they had both borrowed money from.
In 1434 Emperor Sigismund in Augsburg, reintroduced the circle badge/button(which was white and red or white and yellow, and then charged an annual fee for the wearing of it. Then in 1441 Pope Eugenius, brought in a new Judeis Civilas asking for 'relative tolerance' of the Jewish community in line with Augustine idea that the Jews reminded Christians of their Faith and they should be prayed for (Jewish conversion).
The story of Salamone is a story of shame. The outcome of his prosecution was that the Pope was broke due to the Milan wars, and he decided to sell Borgo San Sepolcro to the Floretines, who paid for it with the forfeiture of all Salomone's money and property using the 1406 Law (which had been superceded) and the Judge said "the decision was legal in form but illegal in substance" Such gobbleygook and everyone looked the other way.
In 1452 Sforza defied Pope Pius's edict to charge The Jewish Moneylender's some exorbitant amount- I forget what for- I think it was for a licence to be a Banker.
~Lorredan

This is a very early roundel (9th Century) Italian, a personification of the Moon.

by robert
That is a wonderful piece of art!

Do we have more information on it?

by marco
Thanks to google images


This plaque is one of the earliest known examples of the cloisonné-enamel technique in the West. The moon (luna) is symbolically represented here as a female sky goddess riding in a chariot and holding torches. The plaque originally would have been accompanied by another, with an image of the sun, both probably framing a large crucifix.

by Lorredan
To add.. it was a gift to the Metropolitian Art Museum by J Pierpont Morgan in 1917.
It is Carolingian, or more correctly Frankish. The site said it was found in France, my book says Northern Italy, I guess the boundary in the 9th century was blurred.
All times are UTC+01:00
Page 7 of 8
Powered by phpBB® Forum Software © phpBB Limited
https://www.phpbb.com/