Huck wrote: Or another question: Do we have some indication, that in the critical time of c. 1440 (the moment, which interests us) the text of Cicero had a very specific literary renaissance, which mobilized some painters to express Cicero content in their productions?

I don't recall portrayals of Cicero in the 1430s or thereabouts, but I seem to recall that he was one of Leonello d'Este's favourite authors. Perhaps his portrait was in the studiolo? (among Christian authors, he liked Jerome the best)

Cicero's esteem was growing since Petrarch's time; for the Latin purist humanists like Poggio Bracciolini, he was a model stylist. In the literary controversy between Poggio and Guarino over whether Caesar or Scipio were better (Poggio for Scipio, hero of the Republic; Guarino for Caesar, the founder of the Empire which provided the basis for the Gospel to spread), which took place in 1435, Cicero is quoted 14 times, equal to Plutarch; the next is Livy, with 11 mentions, then Sallust with 10, then Seneca and Suetonius with 8, and Dio Cassius with 5 (knowledge of him is important for my Unicorn theory, since Dio reports that Caesar's chariot broke down in front of the Temple of Fortune during his first triumph).

So Cicero was certainly very popular with a certain kind of humanist.

#52 by Jim Schulman
I brought up Cicero as a possible explanation for the puzzling to me late appearance of Temperance in the Tarot de Marseille sequence. I'm relatively clueless on chronology, but I thought the A & B sequences were earlier than the C, and they had temperance in the "reasonable" early spot close to love and chariot (i.e basic Platonic sophrosyne controlling the passions).

Cicero has this very different interpretation of temperance than the one found in the Platonic dialogues or in scholastic theology. Also I think interest in his work becomes much more widespread in the late 15th and early 16th century. But I'm not making strong case here; just wondering aloud what went into the "promotion" of temperance.

In any case, a Temperance figure labelled or holding a banner "Sol Fama" seems to me to be the very opposite fame; it means that being temperate is the only thing worth a reputation, and that none of the things that ordinarily go into fame are equal to it. That is a very Ciceronian or Stoic sentiment, since attaining fame is not up to one, while being temperate is. However, again, I have no idea if the banner's source is Stoicism

Here is the most relevant section:

Cicero in De Officiis wrote:Everybody, however, must resolutely hold fast to his own peculiar gifts, in so far as they are peculiar only and not vicious, in order that propriety, which is the object of our inquiry, may the more easily be secured. For we must so act as not to oppose the universal laws of human nature, but, while safeguarding those, to follow the bent of our own particular nature; and even if other careers should be better and nobler, we may still regulate our own pursuits by the standard of our own nature. For it is of no avail to fight against one's nature or to aim at what is impossible of attainment. From this fact the nature of that propriety defined above comes into still clearer light, inasmuch as nothing is proper that "goes against the grain," as the saying is — that is, if it is in direct opposition to one's natural genius.

If temperance has been promoted to natural genius, she may deserve her wings.

#53 by Ross G. R. Caldwell
I believe Temperance in this position, immediately after Death, specifically with wings, has been interpreted as a Guardian Angel. IIRC Michael Hurst champions this interpretation.

It also seems natural to interpret her as Fame, since Fame, good reputation, lasts beyond death, and so trumps death. It might be natural for someone, when faced with a moral virtue after death, to interpret it because of this sequence as something other than a moral virtue, which has no relevance in the afterlife. It seem that the people Alciato played Tarot with either gave those names to the cards - because they were of a highly educated class and had to scent everything they enjoyed with erudition -, or, this was a pack of cards with those names (in Latin or Italian).

I tend to think Alciato translated Italian names into Latin ones with a touch of antiquarianism, but that's just my impression.

#54 by Lorredan
I think that Temperance coming directly after Death is perfectly understandable if you think of it this way.
Psychomachia gave us the 'Heavenly Virtues' of Kindness, Humility, Patience,Diligence, Chastity, Charity and Temperance. Temperance is the governing Virtue- the rest are unselfish Virtues or outward flowing. You are Diligent or Kind because of Temperance. Temperance is a prudent act for example.
So Jesus on the cross conquered Death. On that famous day.- Sol Fama/Fama Sol.
~Lorredan
The Universe is full of magical things patiently waiting for our wits to grow sharper.
Eden Phillpotts

#55 by Huck
Well, Temperantia as something like "Guardian Angel" or as a "funeral" and also as "Fame" makes sense at position 14 after 13 as position for Death ... nonetheless other sequences of the trumps are known, and we've to assume that the contemporary and earlier interpretation differed.
We've no early evidence for Temperantia a position 14. The "earliest sure evidence" is Alciato (1544), but as Ross analyzed likely with right, Alciato reports the existence of this row, but likely didn't produce it himself.

MikeH and myself went deep into the "Caos del Triperuno" text (1527) of Teofilo Folengo in December 2011 and had a heavy brainstorm about it with a resulted chaos (well, somehow worthy for the "Caos" of Folengo) of different threads talking to each other ... :-).

a. ..., that the 5 sonnets in chapter (12) "Dialogo secondo (Limerno, Triperuno e Fúlica)" give evidence, that Folengo worked - as far the sonnets are concerned) according the Ferrarese order (with he exception, that for unknown poetical reasons he exchanged Fuoco and Devil).

b. ..., that the whole Triperuno text (somehow parted in 22 elements) presented the Tarot sequence in the manner, that the first part of 22 presented 0 Fool, the second 1 Magician etc till 21. The sequence, that Folengo seems to have used in this "his own order" is - similar to the Alciato text - similar to that of the Tarot de Marseille (so really different to the Ferrarese order). The chapter 14 (so part 15, in other words "Temperance") contains "funeral orations" for Galante, the loved weasel.

Well, the "Caos del Triperuno" is intended to be a "Chaos" and it is generally considered to be a "difficult work" and "possibly not understood".
So, "my interpretation" (above point b.) has naturally a difficult stand. Nonetheless I think, that Folengo presents - bedide many other topics and interests - a sort of contemporary discussions about different rows of the Tarocchi.

Which would move the "earliest evidence for Temperantia at position 14" from 1544 (Alciato) to 1527 (Caos del Triperuno).
Huck
http://trionfi.com

#56 by Huck
Ross asked for this Temperance picture: 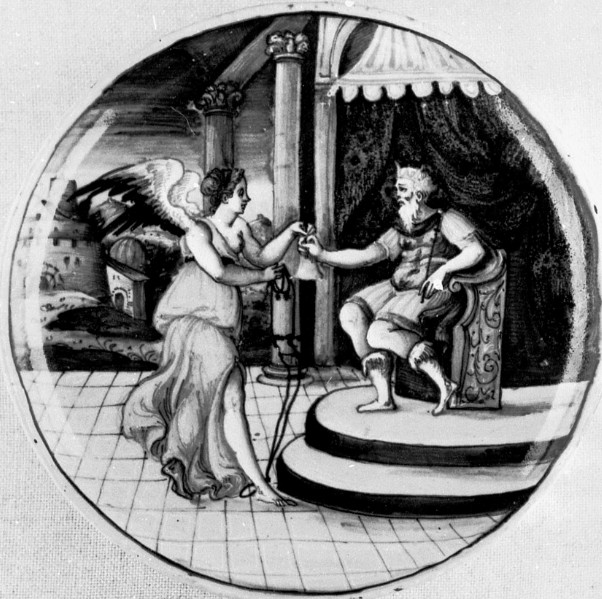 
Ross G. R. Caldwell wrote:How do we know that that majolica shows Temperance?

The "bridle" is a traditional symbol. Possibly also "one free breast". 
Ross G. R. Caldwell wrote:How do we know that that majolica shows Temperance?

The "bridle" is a traditional symbol. Possibly also "one free breast".

I'm not convinced the following can be considered an acceptable occurence of the "free breast" theory, but Rolichon reproduction temperance features a one-eyed chest too - although frankly it feels more like bad design rather than naked anatomy :

Bertrand wrote:I'm not convinced the following can be considered an acceptable occurence of the "free breast" theory, but Rolichon reproduction temperance features a one-eyed chest too :

In my walk through various Temperance examples I saw the 1 or 2 free breasts phenomenon occasionally, but I'm not sure about it.

I think, Rolichon is not the only one in the Marseille Tarot versions (?)

Actually the one breast of Rolichon Temperance remembers somehow the one-breast-only amazons.

#59 by Ross G. R. Caldwell
It looks to me like those Tarot-Temperance breasts are meant to be understood as strapped underneath the garment. The outline of the breast(s) and nipple(s) are visible through the fabric, which is a common enough occurrence in real life as in art, but the intention, notable by the straps of the dress, is that they are underneath and not flopping over or poking out through a hole.

So I think Bertrand is right, the impression of a naked breast is down to poor execution (and in crude woodcut, it surely isn't easy to portray a visible feature underneath a very thin fabric), rather than deliberate symbolism.


mikeh wrote: A good example where more than Temperance is winged is the one Marco put on tarotpedia at http://www.tarotpedia.com/wiki/Image:Temperance01.jpg. But I find it frustrating that we frequently don't see all of the virtues that are represented, or whatever is in the work of art. For example, Robert's at viewtopic.php?f=11&t=71&hilit=temperance&start=30#p1798; since this was done by the same workshop as Marco's, I assume the other virtues are winged, too. But what about the Giovanni Bellini at viewtopic.php?f=11&t=71&p=1811&hilit=temperance#p1811 ? Is that the whole painting? Is it one of a series? Looking on the Web, it apparently has the title "virtue", but it would seem to be of Temperance in particular. If it's just her, is the date of the painting, c. 1500, an indication of when Temperance in the tarot got wings as well?


robert wrote: Will this do?


jmd wrote: From Venice, by Giovanni Bellini (whose brother-in-law was Andrea Mantegna, by the way), is this amazing representation of Temperance - certainly far more removed than the ones I had in mind!

That's 3 times "winged Temperance", and all three are from Venice.

That reminds me, that I found 4 times "winged Spes", all very early (14th century and begin of 15th) and all related to Florence.


MikeH wrote:One thing that might be relevant to Alciato's Temperance is a series of the seven virtues in which only one has wings, namely, Karitas, which is also the highest virtue. See p. 126 and p. 127 at http://books.google.com/books?id=7tIOAA ... &q&f=false. This is in Bartolomeo di Bartoli da Bologna's Canzone delle Virtu e delle Scienze, done, I think Dorez says (p. 71), in Bologna around 1355, dedicated to Bruzio Visconti.

So also a winged Caritas.

The situation (winged Spes in Florence at a specific time, winged Temperance in Venice, possibly winged Caritas in Bologna) reminds me to the possibility, that we might meet in this iconographic problem similar local preferences, as we found already for the "highest Tarocchi-Trionfi-Minchiate" cards .... Florence had Fame above world as highest card, Bologna saw it as Angel, Ferrara had a "high Justice" at second place below World, Milan accepted a "high Temperance" at position 14. Sicily later took Jupiter above Atlas.

If we would assume, that Temperance had been "flying virtue" in Venice, then we have between 1513 at least till 1525 a political alliance between France and Venice and between 1515-1522 a French occupation of Milan, perhaps a period, in which some iconographic traditions for the later French Tarot tradition might have been born (all speculations about the Cary-Yale Sheet - which, however, has a not winged Temperance - go in the direction to assume something like this.

Teofilo Folengo published the "Triperuno" in 1527 (very near to this time) and lived mostly in Venice, actually "working" for a Venetian condottiero Camillo Orsini, who heavily suffered in the soon following sacco die Roma, which manifested a sort of victory or Charles V, but actually the wars didn't really end before 1559.
Still in 1660 (Noblet Tarot) and at the begin of 18th century, when the production of the Marseille Tarot took some larger forms, there was reason to look back to the earlier glorious time, when France had Milan (war of the Spanish succession).
Huck
http://trionfi.com