#21 by mikeh
I don't know much about the Cary-Yale Hanged Man card. I don't even know if there was one. 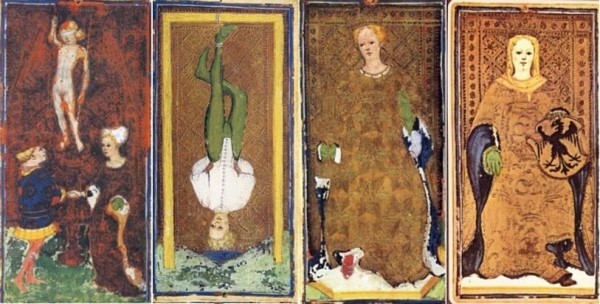 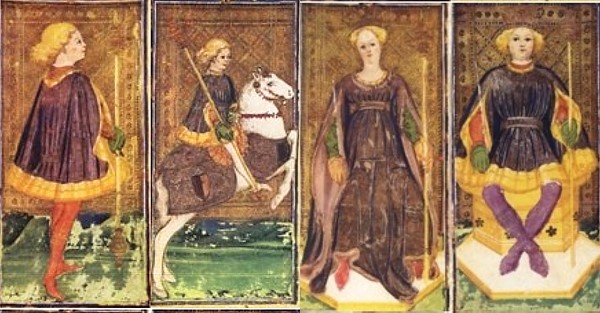 The green sleaves are especially suggestive. "Greensleeves" is a song about sex; according to Wikipedia (http://en.wikipedia.org/wiki/Greensleeves), women who gamboled in the green got grass stains on their gowns. According to Wikipedia, this English song, registered in 1580 London, is in an Italian style. The meaning of the green clothes on the cards, I would guess, is sexual fertility: that is what empresses were good for, and also queens and duchesses. Since Marseille-style Batons were later sometimes shown with green shoots coming from them, probably the green we see in all the PMB Baton courts meant fertility, or at least sexuality, in the springtime when the countryside turned green again. At the same time, the Greensleeves who "was all my joy" is somewhat ambiguous. Although it clearly refers to a fickle lady in the song as we know it, some love-songs were more ambiguous, suggesting a religious love for Jesus, in the manner of the "Song of Songs" as then interpreted. The poetry of St. John of the Cross and St. Theresa of Avila of course made such implied reference unambiguously. Jesus is a fertility-god, being reborn in the spring season just like the grass. In Jesus's case, the fertility pertains to rebirth.

So it strikes me that the PMB Hanged Man has much in common with Jesus. There is a hole in the ground beneath his head. That is just the place to plant grains of mustard-seed. It also might be an entry-way to Hell. After hanging on a cross, Jesus did a short stint there, as I recall, before resurrecting and ascending--all of which is recapitulated in the PMB sequence.

Another thing about hanging upside-down is that it was the way the young Sforza cardplayers' grandfather Muzio was depicted on the bridges and gates of Rome, unless Moakley and Dummett (The Visconti-Sforza Tarot Cards, p. 124) were wrong. But the one who labeled Muzio a traitor was the anti-pope John XXIII (a point Dummett seems to have missed); in dropping his allegiance to an anti-pope, Muzio was actually promoting an end to the Western Schism and thus being faithful to the true Church and its pope, correcting his former error. (I can't recall now whether he supported another claimant or just ceased supporting John. But the point is that he wasn't a traitor to the Church in ceasing to support an anti-pope.) Some people are called traitors unjustifiably, our young cardplayers might have been told. Similarly, Jesus was considered a traitor to Judaism by the Sanhedrin. The penalty was to be stoned to death and then "hung on a tree," or so Jewish law had it (Babylonion Talmud, Sanhedrin)--in reality a tall pole, for a brief period. Dying slowly on a cross might have been a convenient compromise with the Romans. Jesus is another example of the apparent traitor, hung from a pole. Admittedly he was hung right-side up, but the principle is the same, and some of his followers weren't. In any case, the image comes from the 15th century shame-posters.

So all the signs point to the Hanged Man as being the traitor-so-called, unjustly accused, but whose suffering brings forth sweet fruit.

What is the relationship of the PMB image to the Charles VI? It seems to me that the Charles VI is later, as the money bags are a detail that are more likely to have been added in Florence than subtracted in Milan. After the PMB, the more pious Florentines think it must be Judas, but unclearly portrayed. So the artist's patron says, give him bags of money to make it clearer--not that he is literally Judas, owing to certain discrepancies with the biblical accounts, but that he is the Judas-type. 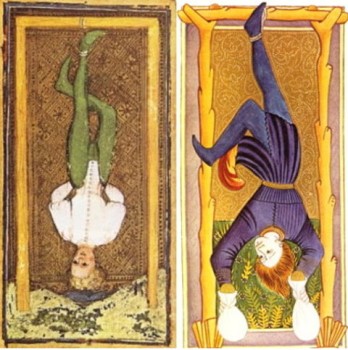 But even here there is one peculiar thing: the position of his legs. The PMB Hanged Man's legs just form a cross or an X, perhaps not inappropriately (X being an abbreviation for Christos). But the Charles VI Hanged Man's have a distinctive flair, which we see later in the Marseille Maison-Dieu card, but which appeared much earlier in alchemical texts to illustrate evaporation, i.e. an ascent upwards. I get the image on the left belowfrom Laurinda Dixon, Bosch, p.256. She calls the illustration one of distillation. She does not give the date, just the accession number: f. 40, MS 29, Wellcome Institute Library, London. I would guess late 14th-early 16th century. 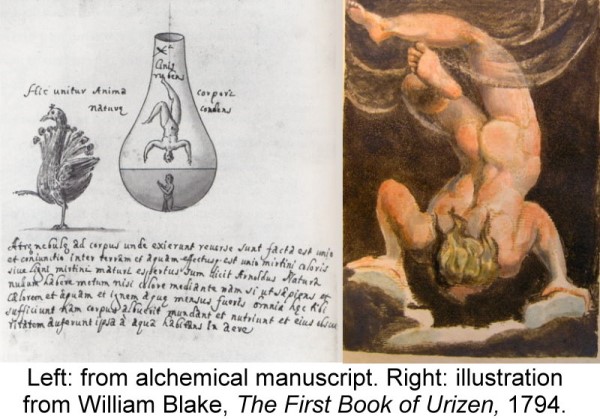 William Blake used the same pose for his personification of the element Air, one of the four sons of the demiurge Urizen. If he was aware of it, I assume that were, too. In distillation, the boiled-off substance does not merely float, like air sometimes does, but rises up, to be condensed later. But an Ascension won't do in the tarot sequence, at least not just yet. So perhaps, for certain people in Florence at least, the money-bags are merely ballast, so that the traitor-so-called can go down before he goes up. And gold is heavier than silver for that purpose. Not only that, its color (like that of the PMB man's hair) is more appropriate for the god-man Jesus, who in hymns was often likened to the morning sun.

At least that is what I make of the different details in the cards. As Huck says, there was likely no Hanged Man Congress to set the interpretation in stone. I imagine people then did as now, each saying their piece, only not on the Internet but around a table as they were playing cards.
mikeh
mikeh

#22 by mikeh
And here is another alchemical illustration from Dixon (Bosch, p. 269), this one with images suggestive of not only the Hanged Man, but two before it, Fortitude and the Wheel of Fortune. Dixon says it is from folio 5v, Buch der heiligen Dreifaltigkeit, early 15th century, Kantonsbibliothek Vadiana, St. Gallen. 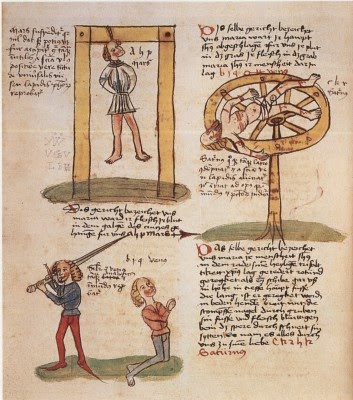 She calls these scenes examples of alchemical putrefaction. It seems to me that they could also be seen as purification through suffering, to which the prima materia is subjected in the alchemist's laboratory. There is more about this manuscript (in English, Book of the Holy Trinity) online and in a 2009 German dissertation. One book in English says it was written at the Council of Constance; if so, it might have had more influence on the early tarot than one might expect, perhaps even worth a thread of its own.

#23 by mmfilesi
Very interesting. Thanks Mikeh. I need go step by step because you say many things.

#24 by mikeh
By "hole," I mean the v-shaped hollow in the ground beneath his head, partially covered in blue, which I take to be water. It is large enough to plant seeds in--or a body part, such as the heart (I am not saying that a body part is meant to be planted; I am just trying to indicate the size of the hole). It is deeper than it looks, as some of the green paint has worn off on the sides, leaving just the brown background--and, on the right, those cross-like things next to the post; I assume they have no symbolic significance.

This hole is retained and even enlarged, so that you can't see the bottom, in the later 17th century "Marseille" designs (or possibly there are mounds around the posts). I did not mean to imply that such a hole (with no visible bottom) exists in the PMB card, just that there is a hole. If in the PMB what we see are mounds around the posts--not that they look like mounds--so that the hole is between the mounds, that is still something in which seeds could be planted, and still a hole.

In Vol. 1, pag. 91, Kaplan said that the traitor of the Cary Yale Hope have a words: Juda traditor.


. A similar term already appeared with the Tarots, to be exact, in the Visconti cards of the Yale University Library. The Hope card, apparently unusual in a pack of tarots (see below), is represented by a kneeling woman in the act of praying. Her hands grasp two ropes, one tied to an anchor, the other around the neck of an old man lying on the ground, whose white dress bears the words “Juda traditor” (Judas the traitor).

Someone can see these words?

#26 by Huck
Kaplan speaks of "white letters on a purple garment".

Vitali, as you quote, spoke of "whose white dress bears the words Juda traditor" ...

... I don't see the inscription. Vitali's text is translated by somebody else. Perhaps both refer to an older source, and earlier the inscriptions were better to see or "still intact". So we had in the past some debate here, if "Martiano" da Tortona is written at one of the Cary-Yale virtues or not. The observer had been Cicognara 170 years ago, if I remember correctly.

#27 by mmfilesi
Perfect, thanks Huck!

For a moment I thought I had gone blind

.
When a man has a theory // Can’t keep his mind on nothing else (By Ross)

#28 by robert
This is what I have on the Cary Yale Hope card...
http://www.tarothistory.com/caryyalevisconti.html
The Tarot will lose all its vitality for one who allows himself to be side-tracked by its pedantry. - Aleister Crowley

#29 by Ross G. R. Caldwell
I think it is spelled out at the very top of his back. Perhaps a little contrast work in Photoshop will highlight it better.

#30 by Ross G. R. Caldwell
I'm not at all skilled with Photoshop, but I think this brought out the "(J)uda (t)...(r)" pretty well.
There is a crossbar at the top of the J, like a gothic or fraktur character.