The Wheel of Fortune

Sun got Grammatica and gold,
Moon got Rhetorica and silver
Saturn got Geometria
Jupiter got Loica
Mars got Arithmetica
Venus got Musica
Mercury got "fisica" (I assume, that's medicine; medicine was related to astrology/astronomy)

... clearly other ideas as you get in the Mantegna Tarocchi, when you relate 21 to 41, 22 to 42 etc. (well, Mars would relate to 25, Arithmetica; but "one is correct" is actually just the average of an accidental mixing).

The Tübinger Hausbuch has a lot about astrology.

#62 by marco
Possibly this has already been mentioned.
Here (Chapter Three) is the De Sphera passage in which Cosmic, Chronic and Heliacal (or Solar) risings (and settings) are described.

In an earlier post, link below, Robert posted two illustrations of the Wheel of Fortune from Amiens, 1323.

In that Wheel thread there is a link to Hurst’s interpretation, correct to my mind, of three of the four figures as the estates of man: the figure with sickle = peasantry; figure on top with scepter = nobility; figure with chalice = clergy; the fourth figure below “has no estate” (or in the parlance of the tarot cards, has no reign)

Lately I have been obsessing over an unresolved problem in Dante – the nature of the sin of his teacher Brunetto Latini [not to be addressed here] – but this teacher had been exiled in France and wrote his main work in French; through Brunetto or by means of other manuscript examples making the rounds in trecento Florence, I believe Dante must have had this very theme of Fortune in mind when he penned this tercet in connection with Brunetto’s prophecy for his own exile:


Nothing new I hear in this prediction,
So let Fortune, as she pleases, rotate
Her wheel and let the peasant turn his spade.
(Inf. XV, 94-96)

But there also seems to be admonitory twist here – the duecento/trecento communal uprisings and what that meant for the stability of the magnates/nobility's rule.

Thank you for your kind reply, Phaeded.


Phaeded wrote:
In that Wheel thread there is a link to Hurst’s interpretation, correct to my mind, of three of the four figures as the estates of man: the figure with sickle = peasantry; figure on top with scepter = nobility; figure with chalice = clergy; the fourth figure below “has no estate” (or in the parlance of the tarot cards, has no reign)

Yes, indeed, I found reference within the cited thread to Hurst's interpretation, in addition to the tentative hypothesis that these illustrations might be related to Renert (the fox) and which the illustration, which I posted would seem to support.


Phaeded wrote:I believe Dante must have had this very theme of Fortune in mind when he penned this tercet in connection with Brunetto’s prophecy for his own exile:

Nothing new I hear in this prediction,
So let Fortune, as she pleases, rotate
Her wheel and let the peasant turn his spade.
(Inf. XV, 94-96)

Nice! Time or the harvest, with all its connotations . . . to each his due.

One of his cards: King with shield 
Huck wrote:Fortune with Death and a Pope on a tree ...

A wonderful and complex allegory. A much better version is available at the British Museum site.

The Wheel of Fortune and the Death below the Tree of Life; Fortuna stands at the left side, turning the wheel to which four figures are attached; Christ appears in the upper left corner and holds a chain which is linked to the wheel; in the lower centre lies a dead body in a tomb and to the right stands the Death in form of a skeleton who is about to shoot his arch into the tree of life; the tree at the right side grows out of a boat and contains a hierarchy of religious and secular dignitaries; several banderoles with text are allotted all over the scenery.

One of the striking features is the Tree of Mankind. The highest branches have religious figures from the pope on down; the middle branches show secular figures; the lowest branches contain women. This is similar to images used in some German editions of Petrarch's Remediis. One such figure can be seen in the post linked below, with emperor and pope in the higher branches, grouping clerical figures on the left and secular on the right. Mockingly, a sleeping peasant and a bagpipe player occupy the topmost branches. 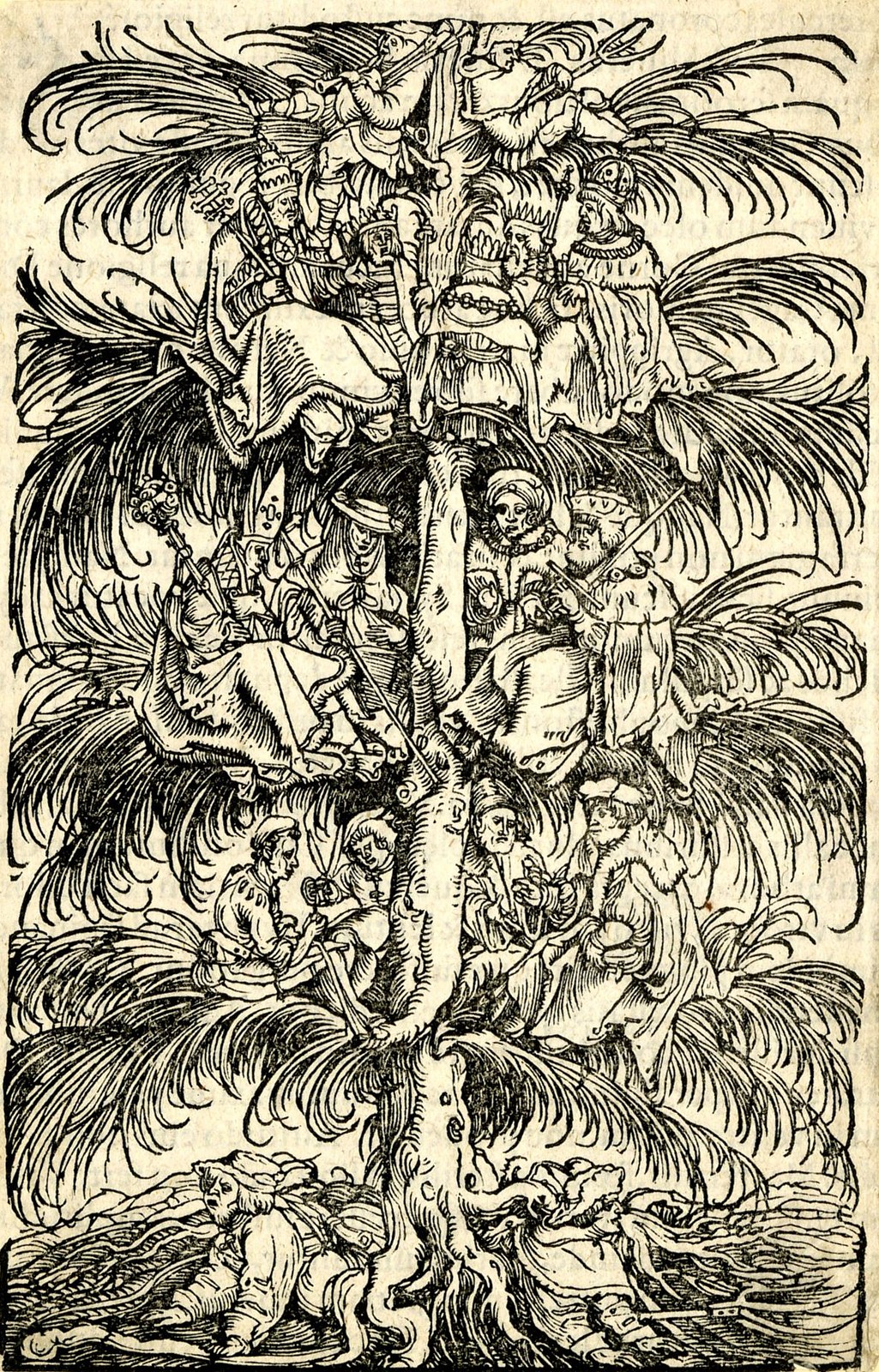 I posted a copy of the British Museum print, along with a couple other allegorical prints and some description and discussion of their relationships with Tarot, back in 2010.


Finally, a third example [of complex moral allegories] is a 15th-century print by the so-called Master of the Banderoles. (You can see why he is called that in this print.) There is a Wheel of Fortune, with the crank tethered to Christ. The idea that Fortune was effectively an aspect of Providence was common view dating back at least to the time of Boethius’s Consolation of Philosophy. Judging from the positions of the figures on her wheel, blind Fortuna appears to be turning it counter-clockwise, and the fellow at the bottom seems about to fly into the grave. The Tree of Life is shown on the right, with its fruits constituting a well-populated ranks of mankind. This includes the pope, monarchs, and others, with the Dove of the Holy Spirit tending to them. The Tree is growing out of a boat, an unstable base, perhaps symbolizing this mutable world. We also see two animals (Dies and Nox, symbolizing Time) worrying the trunk. So everyone’s days (in this world) are numbered.
... because of their combination of 1) a ranks of man, 2) a contemptu mundi moral allegory, and 3) the overarching Christian context, they are revealing analogies to the Tarot trump cycle... along with a great many other moral allegories in art and literature. 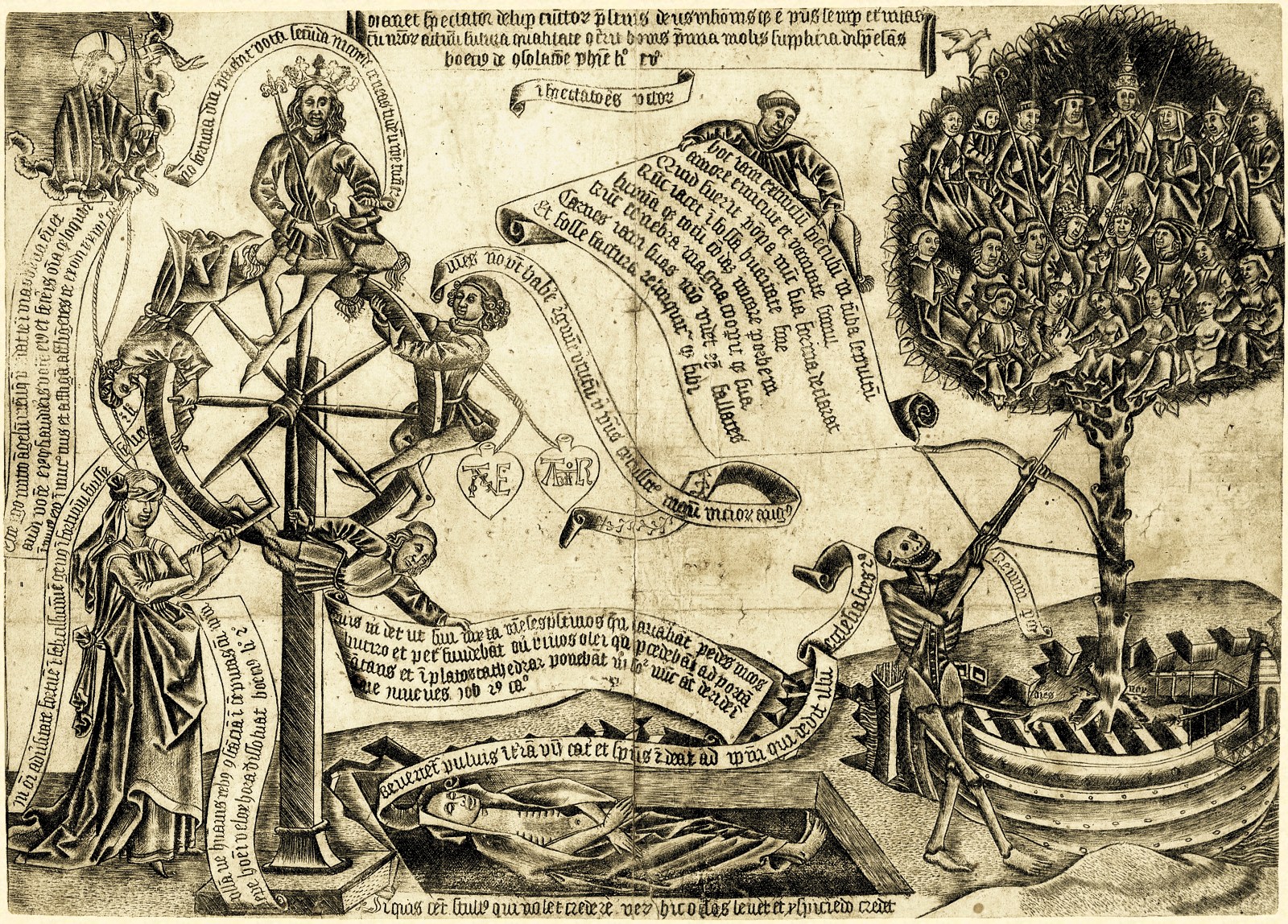 The vermin Dies and Nox appear in other allegories of Time, including some Petrarchian illustrations, as well as in the Parable of Barlaam.

#68 by Huck
hi Michael, nice to meet you

Normally we've sun and moon, telling the same story.
The Saint Sigismondo picture of Malatesta has a black and a white dog, I remember.

The Greek had Selene and Helios (Moon and Sun) and Eos as a figure for morning and evening involved in various love stories, also with mortal humans.
Cephalos, which means "head", belonged to her lovers. He was a hunter and had a magical dog, which could get every animal. The dog met a fox, which couldn't get caught. This was a paradox and it could only be solved by placing both in the stars (or at the heaven? ... naturally day can't capture night ... when night comes, day is gone). So far I remember from Ranke-Graves.

Wiki don't know the story. Well, I still have the book of Ranke-Gaves. Lailaps was the name of the dog, the fox was the "theumessische Füchsin". Ranke Graves gives Pausanias I, 37, 6 and IX, 19, 1.
https://en.wikipedia.org/wiki/Laelaps_(mythology)
Wiki has another source, Apollodoros.

Ranke-Graves adds in the point 7, that the fox had been an emblem of Messene, and that the Aioler probably worshipped the moon goddess as a fox. The Aioler made attacks on Kadmeia to rob children to sacrifice them. This was stopped by the Achaier, who worshipped Zeus (who made Lailaps and the fox to stones).

... :-) ... maybe the truth was, that somebody attempted to build a chicken farm, but this didn't work well, cause there were too much foxes in the region. So they went out hunting the foxes, but somebody else, who had decided, that foxes were holy animals, didn't like that.

Anyway. Is this perhaps a mutated fox and a dog? ... I remember, that the Cephalus story was a topic in Ferrara in late 15th century ...
https://books.google.de/books?id=GdB3LN ... us&f=false

... as "Favola di Cefalo etc", which for the Tarot motif development is a plausible time and a rather good location.

Shown January 1486 (= 1487), written by Niccolo d Correggio (son of Beatrice d'Este, who was present at 1441-01-01, when Bianca Maria Visconti got 14 pictures, which possibly were early Trionfi cards).
Well, this was the wedding scene (January 1487) of Lucrezia d'Este with a Bentivoglio son, for which Matteo Maria Boiardo possibly made his poem in Tarot structure about the 4 passions.

Interestingly, the earliest Tarot Moon in the style with cancer and 2 towers doesn't have dogs (or dog and fox; the Cary sheet).

http://pre-gebelin.blogspot.de/2013/02/ ... nkind.html
You've a very nice picture collection there ... inclusive a series of Fortuna allegories. I didn't note this article before.

Yes, I see, you had the picture of the master of the bandelore before.
Huck
http://trionfi.com

#69 by Huck
Various Wheel of Fortunes pictures in a lot book of Conradus Bollstatter: 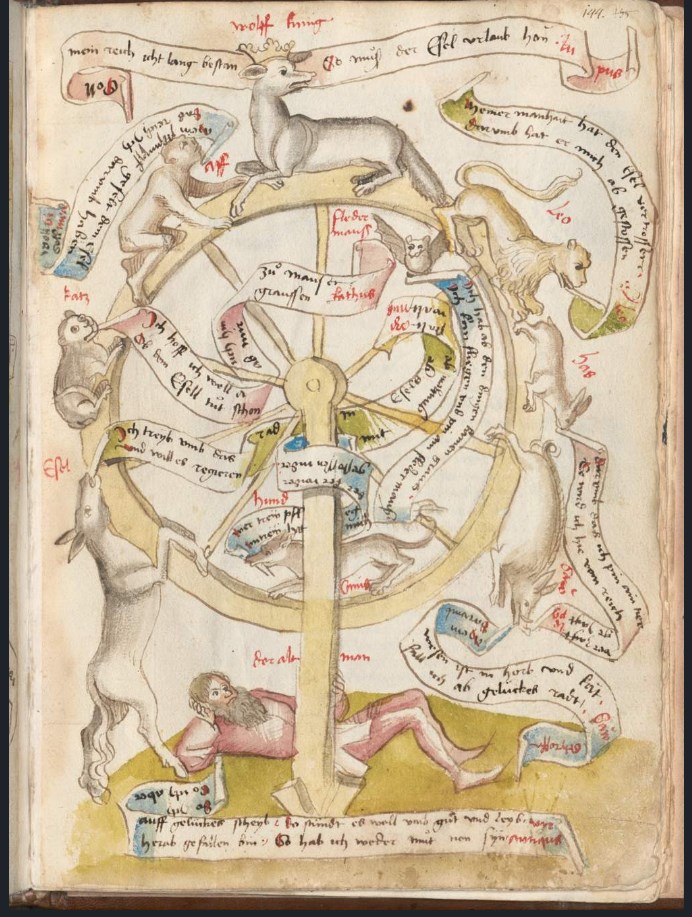