mikeh wrote: The "Chosson," as it is called, 1672 or whenever (2nd from left above), introduces an arm from the side. The Pope appears to be looking in the direction of that person, whoever it is.

I think that, initially at least, the third arm is an illusion, an accidental artefact where the line of the acolytes hood happens to meet the line of his raised hand; in later decks the initial accidental illusion may have been deliberately reinforced. I see the pope not as looking at this owner of the third arm, but at the figures of the two cards that follow him, the lover with his two ladies and the chariot, as the emperor looks in the opposite direction at the cards that precede him, the two ladies and the juggler.
Immature poets imitate; mature poets steal; bad poets deface what they take, and good poets make it into something better, or at least something different.
T. S. Eliot
mikeh
mikeh

I think that, initially at least, the third arm is an illusion, an accidental artefact where the line of the acolytes hood happens to meet the line of his raised hand; in later decks the initial accidental illusion may have been deliberately reinforced.

I see what you mean, especially in the Chosson and Dodal. But I still have some problems. The hand looks naturally more an extension of the arm/crease than belonging to the acolyte. On the other hand, the fabric that goes across the top of the acolyte's back and then just below the hand suggests that the "arm" is just fabric.

Then there is the crease between the two acolytes. It looks to me that Conver has deliberately made it look like a knife and put it in the hand. Someone has a knife, and more naturally it belongs to the arm of the unseen other than to the acolyte. I don't know why the acolyte would be waving a knife at the Pope. I understand better why a knife would be carried by someone else and brandished in the direction of the acolytes.

Could it be an ambiguous image? I don't know much about such things in visual art, except Salvador Dali and Bosch. For Bosch, I posted Laurinda Dixon's three analyses of the Stone Operation already, in the Fool thread. Another, more parallel to the arm, is the "anthropormophic profile," as Dixon calls it (Bosch p. 326) in the vegetation and animals on a lakeshore in Garden of Earthly Delights). Ambiguity is common, of course, in speech, not just in literature (i.e. Empson's, Seven Types of Ambiguity) but everyday life. 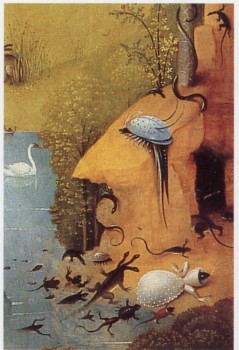 b) Sorry friend... I've tried. I tried the view. I glued my eyes to the monitor. But cant see the knife...

Where are?
When a man has a theory // Can’t keep his mind on nothing else (By Ross)
mikeh
mikeh

#14 by mikeh
I'll try showing you this way, using a deck I don't like to use because it's not 100% faithful to any historic deck. However it is reasonably close to the Conver that I am talking about, so this once I'll use it. It's the Camoin-Jodorowsky deck, about which Jodorowsky has written La Voie du Tarot, or in its Spanish edition, La Via del Tarot. I have shown most of his card, mitting only the title at the bottom, below left. To the right of that one I have singled out just the detail with the knife, from between the two acolytes. Camoin and Jodorowsky have colored it differently from the background, so that it will stand out. Below it is a circle, touching the point of the knife. I don't know where they got that circle. Ignore it. 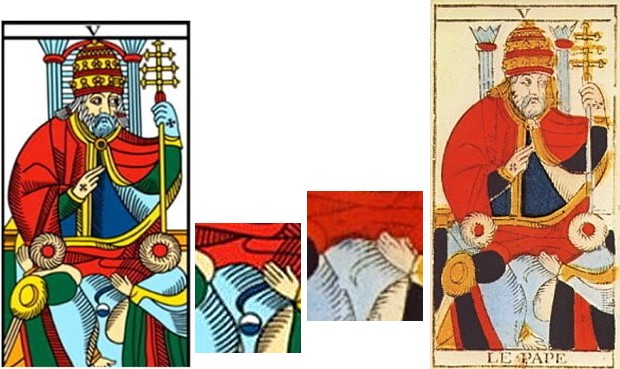 Next to the Camoin-Jodorowsky knife-detail I have put the same detail as it appears in the Conver 1761. Here it is colored the knife the same as the background, but the outline of the knife, going up into the hand on the right of the detail, is there in black. And finally, on the far right, I have put the whole Conver card, with the knife the same place as it is on the whole Camoin-Jodorowsky card.

Why does Conver make it so hard to see the knife? He seems to do that with other details, too; for example, he colors the crayfish in the Moon card the same color as the water, when obviously it would be darker. That serves to make it harder to see certain details in that crayfish unless you look very closely. It gives a certain freedom in interpretation, and protection in seeing the card: the interpreter can choose to ignore the detail if he or she wishes, and people looking at the card can fail to see it for some reason they need to protect themselves from it. And if they do see the detail, then it's like they've uncovered a secret. I am not saying you are unconsciously defending yourself against seeing the knife. I am just trying to say why Conver would do such a thing. Perhaps you know Salvador Dali's art. He hides all sorts of things of sexual and aggressive things in his paintings, on purpose, using his reading of Freud and his self-examination.(Freud reporedly told him he liked art in which the artist put such themes in unconsciously better than art where they did it un purpose!) People admire his lovely paintings, done with such skill. When they learn what's really there, or had in mind, they're a little shocked. See for example http://wiki.answers.com/Q/What_is_Lands ... Dali_about.

#15 by mmfilesi
Now I see (and understand). You are very kind, Mikeh.

... I dont know if it is a knife. Sorry, but I think it is risky to think that this is a knife and not fold the clothes.

Another issue. I dont think Jodorowsky's interpretations are correct. He doesn't study the documents of the decks time. Jodorowsky wants to find Freud in the deck, but Freud's theories are of the twentieth century. The symbolism of the deck cant be explained by the theories of Freud, or Jung. It is more complex. Jodorowsky doesn't take into account the historical variables. Is not the same concept of woman, or mother, or father, in the fifteenth century, among the Visconti-Sforza, who in the seventeenth century, among cardmarkers French, who in the twentieth century in Western society.

Hugs!
When a man has a theory // Can’t keep his mind on nothing else (By Ross)
mikeh
mikeh

#16 by mikeh
Well, Freud saw his theories confirmed in Leonardo's art and Shakespeare's plays. I tend to agree, certainly about Shakespeare (and Oedipus). I see historically situated (as opposed to ahistorically genetic) Jungian-style archetypes in many cultures, especially that of the West. Freud and Jung are products of that culture: why shouldn't there be some of what they find there? Is Shakespeare Freudian, or is Freud Shakespearean? And when you have a phallic finger or a wand in one hand pointing at a round object in the other hand, at different angles in two different decks of 1650 (Vieville and Noblet), is the Freudian interpretation only in the eyes of the Freudian beholder? Is the label "Trickster" for the Bateleur only in the eyes of the Jungian?

And yes, it could be a fold in the fabric. Actually, all the card has is lines and masses of color. But one of the lines is shaped like a curved knife. Why see it as a knife? Well, I am doing historical analysis. I am not trying to impose late 20th-early 21st century ideas on the cards, but rather see them the way they would have been seen by a substantial number of people in the late 17th-mid-18th century, people who had read Cartari's 'Imagini and other mythology textbooks and emblem books, people who were participating in the secret society initiations then in vogue, people who appreciated Shakespeare and Cervantes, people who studied the Greco-Roman classics and the Fathers of the Church for clues to ancient mysteries that deepened their feeling for Christian rituals they practiced every day. In that sense, the knife is nothing but the sword of the angel that chased Adam and Eve out of the Eden of eternal life and thereby inflicted upon them the long, lingering death we call life. "You will not surely die," said the serpent, who was a deceiver and a trickster.
SteveM
SteveM

Thank you mike, i see it now, so maybe my poetic id of them as Gemini was not so far off the mark after all;)

If we allow ourselves to interpret the fold of cloth as the Sickle of Pollux, can we interpret the lines coming from the hand of Castor along the red cloak of the Popes arm to be Castor's whip. It looks like a stick in his hand with three 'thongs' (threads? not sure of the nomenclature for parts of a whip!) that also define the elbow of the pope. And that triangular thing at his side with four strings, is that his lyre?

and Pollux/Heracles with sickle:
http://www.wilsonsalmanac.com/images1/i ... ini_cr.gif
Immature poets imitate; mature poets steal; bad poets deface what they take, and good poets make it into something better, or at least something different.
T. S. Eliot

#18 by debra
Do you all think those guys were so literate? I believe these mass-produced cards were made for the mostly illiterate working guys who bet with them at the local pub.

Anyway, that smile on the robe looks like a fold to me. If I wanted to half-hide a knife in the image, that's not how I'd do it

debra wrote:Do you all think those guys were so literate?

I allow for the unknown creators of differing designs the education at least of those we know of that designed decks, such as a Boaido or a Mitelli for example.

Many engravers of cards were also involved in producing star maps and horoscopes (think of Schaar for example) and cards of saints with all their particular little identifying emblems. A lot of card producers though were just copying what others had made for themselves to sell on the market, there were no copyright protection rules, no doubt most of these copyists did not understand all the details of the original from which they copied, and thus such details got lost or distorted; or misunderstood what they saw, and thus changed a detail to conform better with their (mis)understanding, JodoCamoin are for sure not the first to do so, but rather are exemplars of a long tradition of 'rectification'

Immature poets imitate; mature poets steal; bad poets deface what they take, and good poets make it into something better, or at least something different.
T. S. Eliot
mikeh
mikeh

#20 by mikeh
Some of the woodblock carvers, the ones whose work shows any originality, probably also had people behind the scenes with suggestions on what to put in the cards. That's how the Belfiore Muse paintings got started in Ferrara; the Templo Malestesta in Rimini followed the same program more faithfully. That's what Martiano did in the 1420's for his "Greek gods" proto-tarot. I have no doubt that Philippo Visconti or Bianca Maria, or whoever commissioned the early Milan decks, had specific ideas in mind, too. Surely whoever did the "Mantegna tarocchi" must have had scholarly help, and similarly for the Sola-Busca, whose trumps are based on a Roman historian. (The pips are another story.) In more recent times, and more openly, that's how Waite and Crowley did their decks, and Falconier before them (http://newsletter.tarotstudies.org/2008 ... ian-decks/). Why not the centuries in between?