The text speculates that the seven bands of the crown of the "papessa" perhaps refer to the Seven Churches in Asia, from Apocalypse 2-3, representing all of Christendom.

The figure on the left seems securely identified as the Virgin Mary. Before the full restoration, it was thought that her right hand rested on a wheel and that she was holding a palm (martyrdom), so she might be Catherine of Alexandria. But the restoration revealed a lily, the symbol of purity. Along with the 12-pointed crown and the general aspect of the figure, then (along with the halo which means she is not a contemporary person), the iconography strongly suggests Mary.

The papessa is standing on a Moon (which they say symbolizes the Old Testament) and Mary the Sun (the New Testament).

#72 by marco
Hello Michael and Ross,
I am happy you find this painting interesting!
Unluckily the fresco is in a bad condition and the photographs are not good. The best one possibly is the one Michael already found on wikimedia:
http://upload.wikimedia.org/wikipedia/c ... rtelle.jpg

From the salogentis.it page I get what follows:

At the top there is God with the Holy Spirit dove (which I cannot see) and two angels. The woman on the left was identified with St. Catherine of Alexandria (but, as mentioned by Ross, Massimo Negro says this has been confuted after the restoration); this woman / Virgin Mary, stands on the Sun. The woman on the right holds a golden and a silver key (which I cannot see) and wears a tiara with seven crowns, possibly hinting to the seven churches in Revelation; she stands on the moon. According to the web page, Christ wears a similar tiara in an Apocalypse painting at the Staatsgalerie in Stuttgart (the Erbach panels?, I cannot find a decent image). The two women hold a veil with three circles representing scenes from Christ's passion: crucifixion, resurrection and ascension (or is it a flagellation?). At the bottom there are other figures that the site identifies as donors, but they seem to me to be saints, since they have halos.

#73 by Ross G. R. Caldwell
They seem to be the gold and silver lines coming up from her hand 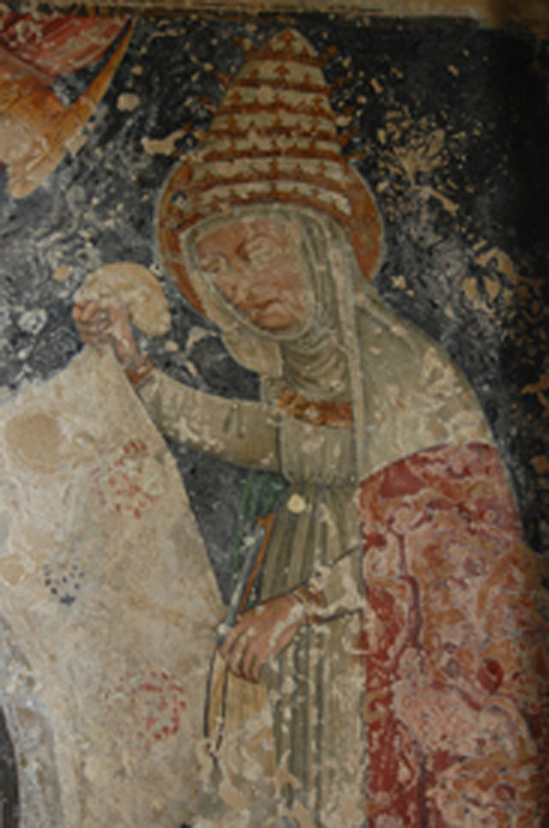 I wouldn't have identified them as keys, but who am I to argue with people who have restored and studied the fresco in person?

#74 by robert
Wonderful find!
The Tarot will lose all its vitality for one who allows himself to be side-tracked by its pedantry. - Aleister Crowley

Re: An early XV Century Popess


marco wrote:I am happy you find this painting interesting!
Unluckily the fresco is in a bad condition and the photographs are not good.

For in situ context, there is a panoramic splice of two photos on this page.

Re: An early XV Century Popess

#76 by marco
Thank you Michael,
that church must be a very impressive place!

And thank you Ross, I can see the keys now

I found another interesting XV century fresco from Galatina, also in Puglia. In this case it is difficult to say if the allegory of the Church is a Pope or a Popess. Yet I think it is interesting that, like in Ortelle, the allegory is a member of a couple: with Mary in Ortelle, with Christ in Galatina.
By the way, the church of St. Caterina in Galatina has one of the most impressive fresco cycles in the world!

The Galatina image is very similar to a 1450 fresco by Vecchietta in Siena. In this case, the Allegory of the Church is more clearly masculine.

#77 by marco
Just to note that in Vecchietta's fresco the Church/Ecclesia stands upon Peter because the Church is built upon Peter:

Matthew 16:18 "And I say also unto thee, That thou art Peter, and upon this rock I will build my church".
mikeh
mikeh

Just to note that in Vecchietta's fresco the Church/Ecclesia stands upon Peter because the Church is built upon Peter:

Matthew 16:18 "And I say also unto thee, That thou art Peter, and upon this rock I will build my church".

This is very much the kind of evidence I want to see, Marco, thank you. She is clearly the Church and not the Popess, due to the 7 tiers, but close enough to the tarot Popess that someone who saw the Popess card might think the same, the Church, and not Pope Joan, as the card's detractors later implied, if there were more of such images, and in Northern Italy. It would definitely establish the Popess = Church hypothesis, at least as a natural interpretation, whatever the original motivation for the card.

The keys are especially nice. If by chance it could be shown that the earliest Popess card (before the PMB) had the keys, too, it would be even more persuasive, and tend to count against Popess = Manfreda as the original, because of the authoritarian nature of the keys, at least as I understand Matt. 16:19, part of the "age of the son" that Manfreda was against (and suffered from).

I take it that the keys are to show that she is the Church of St. Peter, which alone reflects the will of heaven, and to which alone heaven responds, for the admittance of souls therein, and not that she is the Pope's female counterpart. I see on Wikipedia that while the papal tiara was part of the pope's personal coat of arms starting in 1316, the first Pope to insert the keys into his personal papal coat of arms was Callistus III, 1455 (http://en.wikipedia.org/wiki/Papal_coats_of_arms); perhaps the keys on some Pope/Popess cards (and maybe the Siena fresco) are somehow connected with that event. The Charles VI Pope has two keys, a kind of gray; in the d'Este, they appear golden, if that's what he has. The "Tarot of Mantegna" Pope also has two keys. We don't have a Charles VI or d'Este Popess to view; but in the Rosenwald, which tends to follow the A pattern, the Popess has a key and the Pope may have one--that part of the card is obscured. In the Catelin Geofroy, both Pope and Popess (trump 2) have a silver one. The PMB, Cary Sheet, Budapest (Kaplan vol. 2 p. 276, trump 3), and other French cards (trump 2) that I can find are keyless.

#79 by marco
Hello Mike,
I am happy you find the Ortelle fresco interesting!

I want to add that also Giotto's Fides / Faith has a key. That painting still seems to me the most relevant antecedent for the Popess in general and for the Visconti Sforza card in particular. I think the context of the trumps imposed some additional constraint: the "Popess" had to be visually linked to the Pope and differentiated from the "Empress", so she wears a tiara, even if a crown would have been a more common attribute for Church/Faith at the time.

mikeh wrote:If by chance it could be shown that the earliest Popess card (before the PMB) had the keys, too, it would be even more persuasive, and tend to count against Popess = Manfreda as the original, because of the authoritarian nature of the keys, at least as I understand Matt. 16:19, part of the "age of the son" that Manfreda was against (and suffered from).

The thing that counts most against the secret survival of the Guglielmite cult inspiring Bianca Maria to make a picure of Manfreda as a Popess is that there is no reason to believe her cult of the late 13th century did survive.

Secondarily, even if the Visconti family did have the original documents, there is no mention of the word "papissa" (Latin for Papessa) in them. It does mention that Manfreda was supposed to become Papa, but it doesn't change the gender of the term and doesn't make much of a big deal of the claim.

The first person I can find to use the term Papissa when describing Maifreda is Giovanni Pietro Puricelli (1589-1659), in his summary of the beliefs of the sect of Guglielmites, point 8 (of twelve). This was first edited and published by Lodovico Antonio Muratori (1672-1750) in 1741 (this summary was widely translated into Italian, French and English).

(In the future Maifreda was to be a true Popess, provided with the authority and power of the true Pope, just as the Pope and Papacy of the Roman Church, which then was, would be abolished, and the place being given to the Popess Maifreda, Jews, Saracens, and the other nations, who are outside of the Roman Church and not yet baptized, should be cleansed in the water of holy baptism.)

The notion that the PMB Popess (or even the existence of the Popess among the Tarot trumps) represents Manfreda da Pirovano is a romantic fantasy that should be discarded.