My explanation for the vestimental contrast with the Pope in the same deck is that Bembo was taking pains not to mislead people into thinking he was painting a sacrilege, either the Queen of Heaven in a deck of cards, or Pope Joan. That Bembo's popess looks like the allegory for the Church, Ecclesia (Catholica), that would begin appearing a century later in the wake of the Council of Trent and the Counter-Reformation, is a coincidence (another such striking coincidence I saw recently escapes me at the moment, I didn't realize it would come in handy as an example).

On the other hand, if you wanted to argue that she represents Fides, "The Faith," that would be a less anachronistic title, and for the papal crown there is precedent in Giotto, although a lot of time separates Bembo from Giotto, with no apparent evolutionary links in between. But the absence of explicit evidence here is not a weighty argument, since, as always, so much has been lost, and we have all seen only a fraction of what still exists in any case. Also, "Fides" as one of the Theological Virtues does of course exist, although not as an explicit "Popess" with the identifying feature of the papal crown, and the canonical version has the chalice and host. Later allegories of Ecclesia and Fides are conflated. 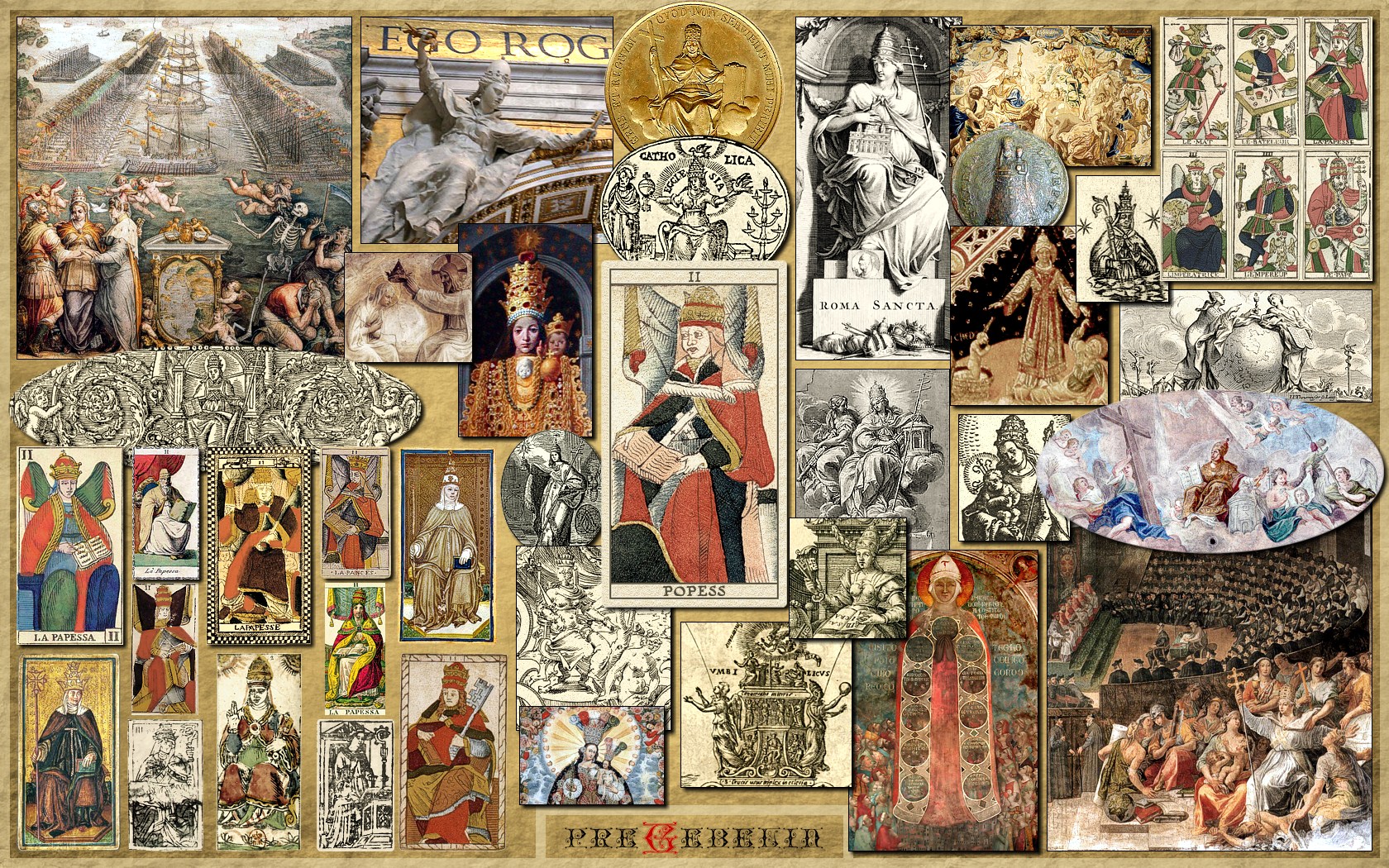 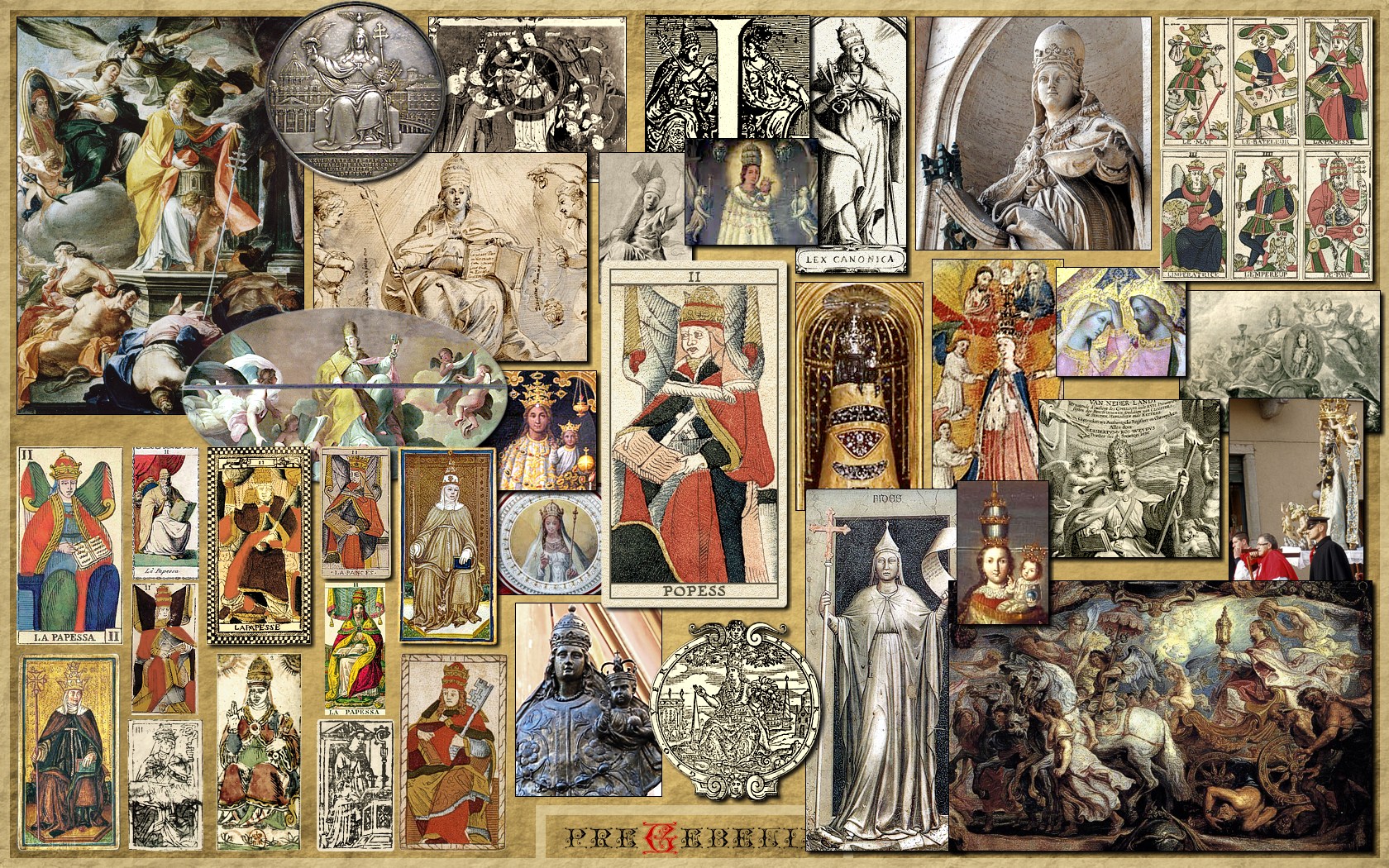 
But we of course differ as to why that is so - Faith, with essentially the same attribute of the cross-staff in the CY, wouldn't exist in the same deck with Eccelsia as being too similar. You argue she was originally one of two males (which brings us back to the Papi thread). In my favor, the CY Faith trump exists before Bembo's creation (and all of the theologicals are replaced in the PMB); by contrast, there simply are no two popes anywhere in the 15th century. I've also presented contemporary evidence, 1455, for a comparable Ecclesia in this thread - you have none for two popes with two emperors ("papi") in the 15th century.

I can only quote myself from last year in this thread -


When I see a male pope and a female pope, and a male emperor and a female emperor, I see two popes and two emperors. The differentiation among them by sex is an artistic convention. There are other ways to make them distinct, including abandoning papal and imperial insignia on two of them.

That is, to reiterate, I do not take differences among the papi to imply that an internal hierarchy must have existed. The Bolognese papi, in Alla Torre and Mitelli, are clearly distinct, merely not by gender. Other gestures and attributes do the work. If the equal-papi rule were present in Milanese play of the 1440s and later, there is no reason to assume it would leap out of the iconography for us, any more than the presence of the Fool tells us whether he was an excuse or not, or whether he and the Bagatto were wild cards that could be used in making combinations. The rules are not in the pictures. The papi are a group, that is all, we don't know from that how they were played.

So, if the Ur-Tarot were found, complete, I presume that it would be printed from woodcut, not very large (not as large as modern standard Tarots like the Tarot de Marseille for instance), that it bears no inscriptions like titles or numbers, and that, at a minimum, it would depict the papi as two popes, identified by crowns, book (or cross), and keys; and two emperors, identified as such by their crowns, and other imperial insignia like scepter, and orb. Since Alla Torre shows two beardless popes, I'm going to presume it was always this way in Bologna, and thus the Ur-Tarot; both can be taken as popesses. I would argue that this ambiguity was intolerable to more refined clients and artists and impossible in larger pictures, especially paintings, and thus led to clearer and sexed depictions, as well as to the bearded and beardless distinctions sometimes seen. I would argue that this process is analogous to how female valets come and go in the same regional styles at different times and in different places.

To me, this is sufficient explanation for how the female papi, Popess and Empress, came to be.

We are going to agree to disagree here, but I thought I would clarify your mischaracterization of my argument.

1. Ecclesia and Synagoga were a well established tradition - with Ecclesia holding the cross staff, sometimes as a pennant cross on a staff, and sometimes holding a chalice. The 1455 Burgundy manuscript is such an example - a crowned nun with cross-staff (no one would blink twice if that version of the "popess" appeared in a deck of tarot). Absent Synagoga, I would admit the cross-staff and chalice or scroll/book would have allowed a confusion with Faith, which is part of my point. But your position that Faith "would be a less anachronistic title" is completely off base - Ecclesia existed well prior to tarot.
2. I did not say Bembo invented Ecclesia - which was unnecessary, she existed - what I said was he (re)invented (depicted is a better word) her as a Franciscan tertiary nun with papal crown. Ecclesia is always shown wearing a crown; a papal-like crown was given to the similar looking Faith by Giotto, and clearly the PMB borrowed from Gioto's frescoes in the Scrovegni chapel (e.g., the Fool), hence the papal crown on Eccelsia in the PMB (Faith and Ecclesia sharing a similar meaning - the belief system common to all Catholics versus the collective group of Catholics themselves - as well as iconographic attributes, so a borrowing from one to the other not wholly surprising).

All Bembo did was articulate the papal crown on top of a Franciscan tertiary nun - he did not invent Eccelsia. His intention would have been perfectly clear to the Milanese elites of whom would have been the first consumers of PMB decks. From my old "Literary source/Dante" post:

Germane to Sforza’s political needs in 1450 was to at least keep the new pope neutral (Sforza was often at war with the previous pope over his former possessions in the Marche), Nicholas V, who had already involved himself with the Franciscan order at the outset of his papacy:

Almost immediately upon becoming Pope Nicholas V, he issued the Franciscan targeted Bulla Pastoralis officii (July 20, 1447) which had the aim of responding to the requests of the “friars of the Third Order living in Italy”, by giving them the right to possess “houses, oratories, and other places” (domus, oratoria atque loca), together with the right to found other houses “with the permission of the diocesan bishop” .… Since the first Regular Tertiaries seem to have been hermits, Nicholas V invited them to adopt a habit which would distinguish them from simple hermits, and at
the same time from other religious Orders (from this link: http://www.franciscan-sfo.org/hland/histfranmov2.pdf )


To put to bed any lingering doubts about this identification of the “Papess”, the conditions in Milan at the time the PMB produced explain the need for a Franciscan Tertiary in light of the one popular communal project that extended from the Visconti to the Sforza era: hospital reform. The movement to reform Milan’s corrupt charities took on momentum in earnest under the leadership of Martino della Gazzada, a wealthy banker and merchant and member of Misercordia; after St. Francis’s visit to Milan in 1441, della Gazzada became a Franciscan Tertiary under the newly formed Observant monastery of Santa Maria degli Angeli. Following della Gazzada’s example, by December 1442, 19 new male members from the city’s merchant class had joined the Tertiaries and in 1447 the community had more than doubled in size (Evelyn S. Welch, Art and authority in Renaissance Milan, 1995: 133). Upon the death of Visconti in 1447 the new Ambrosian Republic moved quickly to form a committee to continue the hospital reform, the Deputati sopra le Provvisioni dei Poveri, with della Gazzada taking a lead role in what proved to be one of the most popular initiatives of the Republic (ibid). When Sforza took over in 1450 his plan was not to just sanction a process already in place but closely associate his regime with it so as to take the credit for its final realization in the form of the enormous Ca’ Grande hospital, built on Bernarbo Visconti’s old palace in Porta Romana that Sforza donated for the project (ibid, 136). Although prominent Republicans such as della Gazzada were excluded and Sforza’s own secretary inserted as a lead deputy, Cicco Simonetta, the connection to the Franciscan Tertiaries was maintained, via Simonetta’s own representative who tended to day to day activities, Giovanni Caimi, a ducal courier whose “family had been closely connected to her Franciscan Tertiaries in the 1440s, and in 1446 Giovanni was charged with the administration of the Ospedale deo Poveri in Bianca Maria’s dower town of Cremona” (ibid, 141). Two Ciami women donations ensured the commencement of the Ca Grande’s construction in 1456. Thus a popular communal movement that became closely aligned with Franciscan Tertiaries that had preceded the arrival of Sforza was nevertheless coopted into an expression of his own piety. Although the hospital (1456) post-dated the PMB (c.1451), the religious sentiments of the Milanese patriciate, as well as the lower classes that formed the backbone of the Tertiary Order, would have been the apt symbol of popular piety at the time of Sforza’s investiture and thus an apt symbol of the Church in Milan. Sforza primarily courted the Milanese patriciate and Welch notes that while most wealthy Milanese men and women did not join the Franciscan Tertiaries many were buried in the Tertiaries’ habits (ibid, 133).


This adequately explains why Bembo was directed to dress up Ecclesia as a Franciscan tertiary nun in Milan, and why she is Franciscan in that city, especially during the plague of 1451 when the need for the expanded hospital was acutely felt. Otherwise, she has the basic look of Ecclesia, but retaining the papal crown first suggested by Giotto's similar looking Faith, with that crown articulated with the three bands by Bembo which in turn influenced subsequent depictions of Ecclesia within tarot. The idea of two popes has nothing to do with any of this. Given the combative nature of the Fraticelli/Spiritual Franciscans, particularly critical of the pope and clergy in the previous decades, placing a papal crown on on the tertiary nun merely proclaimed obedience of the Milanese church to the Holy See. It was the politically expedient thing to do, especially as Sforza was petitioning the Pope, also keenly interested in Franciscan matters, to broker a peace with Venice and Naples.