mikeh wrote:Pen, I am still waiting for an explanation of why the fourth leg, in the Noblet and Vieville and Conver, could not be behind the bateleur's leg, straight up and down and totally hidden by his leg. You only showed that it couldn't behind his leg at an angle to it, partly visible at the top, something I had conceded to Debra already. Or did I miss something? (I have tried "Arghhh!!", but it doesn't help.)

Now I'm screaming "Arghhhhh"! If the fourth leg were behind the Bateleur's leg, not only would the table top be outside the bounds of artistic licence, given even the casual attitude to perspective shown in these drawings, but unless that leg was attached to the centre of the table top rather than on the corner, his body would have to go through it.

I've done all I can with this now, I guess everyone will have to decide for him/herself, as I've said more than once on this thread. Regarding the stabilty of three-legged tables, as I said before, it depends on where the third leg is positioned - the table Debra's drew would certainly work, what we have to ask is (given the visible table top on each card) whether that sort of table is possible/likely.

#72 by mikeh
Thanks for trying, Pen, I appreciate hearing your perspective (no pun intended). I admit errors all the time; but not this time. Just let me say that I think your extension of the table top, which is what makes my proposed possibility look ridiculous, is a trick, introducing an artificial and foreign way of looking at the table. Hardly anybody in those days except a trained artist (and yes, Conver's cutter is a trained artist, but he's messing with us) would look at the table your way, as extending that far out of the frame, unless under the influence of your diagrams; for most people, it would be mostly there, in the frame,[added next day: roughly parallel to the right side of the frame and a little further out--to the extent the issue entered their consciousness at all--as in my modification to your diagram, the added line just outside the frame, below: 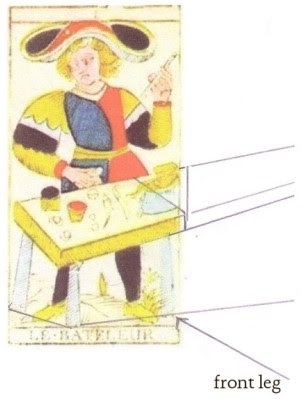 You notice that my reconstructed table forms a kind of trapezoid. It no weirder-loking than your table. That may be why the people who drew four legs drew trapezoids for the whole tabletop (e.g. the Rosenwald, de Gebelin) .]

They were that ignorant of how three dimensions projecting onto two dimensions would look (or whatever you are doing). De Gebelin and his "artist," as late as they were, didn't notice anything wrong with their table and their Magician's legs. Neither did I, until this discussion. [Added next day: He probably asked for copies of the Conver trumps and liked the results. I can imagine him holding the drawing up next to the card and saying, "Yes, you got it!" or perhaps "Formidable!"] We see photographs every day, and they train us in what is "correct" and "real"; earlier, people didn't have such aids. (I credit this point to David Hockney's book on Renaissance art, hoping that people won't reply with an ad hominem argument.) And the table leg wouldn't have to go through his leg at all. He just has his foot pushed out forward toward the middle, blocking the bottom half--as shown in numerous engravings and woodblocks of people standing at similar tables shown from a different angle, some of which I posted on this thread. But I will refrain from beating further what appears to be a dead horse.
mikeh
mikeh

#73 by mikeh
Well, I did mess with my earlier post a tiny bit, to make it clearer.
SteveM
SteveM

#74 by SteveM
I see what your saying Mike, and while I do not agree that it necessarily is so I agree that it is possible for the bateleurs leg to be in front of the table leg (without magically passing though the object). Pen's examples (for which a big thankyou) do make a lot of sense and are convincing, but it is a valid objection that such rests upon our total familiarity with perspective and being so accustomed to seeing and reading a two dimensional object within its conventions. While convincing, applying the rules of perspective to an object to which such rules do not seem to have been applied is somewhat 'tricky'.

I have always suspected that if it is to be read in terms of perspective, it is rather in the manner of inverse perspective, also known as Byzantine perspective, in which the vanishing point is towards the viewer somewhat like the 'reversed perspective' example here:

This I think would give a reading of the table somewhat closer to your redrawing in post above, than the one we may expect from the perspective to which we are more accustomed as applied by Pen: this still would not necessarily put the table leg behind that of the juggler however.

See for example the pedestal of the virgin and child here:
http://media-2.web.britannica.com/eb-me ... 2CBA70.jpg

See the bed of the virgin here:
http://campus.udayton.edu/mary/images/birth6.jpg

the cradle here (which also shows how the leg may still be ‘outside’ of the frame):
http://www.ottobwiersma.nl/philosophy/b ... virgin.jpg
Immature poets imitate; mature poets steal; bad poets deface what they take, and good poets make it into something better, or at least something different.
T. S. Eliot
mikeh
mikeh

#75 by mikeh
"Inverse"--wow, I had no idea. Very interesting perspective, Steve (pun intended), and thanks for the links. So maybe that's why the Rosenwald, whose table shows four legs, is a trapezoid; the artist knew the Byzantine tradition.

I do not say it is necessarily so, either, just possible, psychologically and culturally, and even then, weird.

#76 by Ross G. R. Caldwell
Don't worry Pen, I'm with you! No trapezoids, super-weird perspectives or three legs for me!

The table is supposed to have four legs, and the last leg, and corner of the table, is outside of the picture. 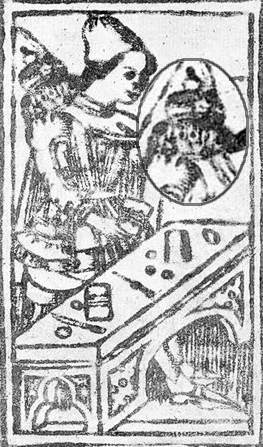 This is either a direct ancestor or ancient cousin of the Tarot de Marseille, showing the tendency in this tradition not to show the table frontally, but at an angle. The fourth "leg" isn't visible, but we know it's there.

Sorry about the inset - it's the only one I have at the moment. This was made by Michael Hurst, I believe, when we were discussing the monkey on the figure's back.

A couple of more examples of so called 'super wierd' perspective:

Wiki's explanation of 'reverse perspective', in which lines diverge on the horizon and converge towards the viewer (the oppposite of conventional linear perspective):
http://en.wikipedia.org/wiki/Reverse_perspective
Immature poets imitate; mature poets steal; bad poets deface what they take, and good poets make it into something better, or at least something different.
T. S. Eliot

#78 by Ross G. R. Caldwell
By "super weird" I don't mean the typical medieval or byzantine manner of drawing, but Mike's suggestion that the table more or less ends at the edge of the card, making a very sharp point towards the upper right (our upper right). I don't see any justification for that in our tarots. Even although the perspective is a little screwy, it isn't as screwy as that.

It might be that the magician was originally depicted seated, as in the Cary sheet, which could explain why his legs and feet are impossibly placed relative to the front legs of the table.

Mike keeps saying that his view is no weirder than Pen's, but I disagree. The only thing weird about Pen's tables are the feet of the legs, which given the placement of the magician's legs are an acceptable degree of weirdness.

Whatever, thanks anyhow for another example in tarot of the use of byzantine perspective, the use of which could in fact result in the shape of a table top like Mike has suggested.

I agree with you re: the convention of showing the table at an angle, there is another example somewhere that would place the hidden leg inside of the picture frame, I'll see if I can find it.

Here you go, the magician here:
http://trionfi.com/0/j/d/sheets/
Immature poets imitate; mature poets steal; bad poets deface what they take, and good poets make it into something better, or at least something different.
T. S. Eliot

This shows the entire table as well - I don't see the point of the comparison.