robert wrote: As for the subject, it still reads as "exposure" to me, the Tarot de Marseille is the dog pulling down his britches, and the d'Este is children. IMHO.

I think perhaps that reading the card as 'touching' rather than exposure sent the discussion off in the wrong direction. I've been looking at Fools (the sort with bells and asses ears), and it seems they're quite often shown with their trousers down...

Re. your explanation of what's happening on the Fool card, are you completely happy with it?

I'll say a little more. The d'Este Fool has a kind of satyr-like exhibitionism, like I imagine the clowns had in ancient Athens, making jokes with their fake phalli. I have a photo of a satyr-statuette with a pose and facial expression very much like that of the d'Este Fool, except that his phallus, of which he is mightily proud, is erect, in an atypical way, and rather large (for a 6 inch high statuette); I took the photo at the Athens Archeological Museum. My wife says I shouldn't post it on this family-oriented site. OK, I blocked out the offending part. Suffice it to say that the phallus mimics the left arm.

The statuette is of a satyr, a Dionysian creature. There is no question of direct influence, just the same spirit, especially his cockiness, so to speak.

At some point around the time of the d'Este card, Plautus was being performed in Ferrara--as part of the Jan. 1487 festivities around Lucrezia's wedding, for sure. I'd expect that those who knew Greek would also have read Aristophanes, some of whose characters have the satyr spirit. I think it was known that these were "satyr plays," with satyr choruses, etc., in a theatrical setting devoted to Dionysus. There is much sexual imagery in these plays. Merging this known Dionysian imagery with the license of Carnival, the sexual imagery in Boccaccio, and the wit of the court fools, the result is a d'Este Fool with a similar spirit as my photo of the satyr-statuette.

As far as touching vs. exposure. I've been looking, too, and nakedness was a virtue in Fools. If not in simulated tatters, they came that way. Here is Malcolm Jones, in The Secret Life of the Middle Ages, 2003, p. 101, in his chapter on Fools:

Sometimes he is completely naked, a madman who has thrown off his clothes in his frenzy, and carries only a club for his own protection, and chews on a round loaf or stone, and many of the earliest Psalter fools are of this type. Interesting evidence that nudity might play a part in real-life fooling is afforded by the Wardrobe Accounts of Edward I, which record a payment made to Bernard the Fool and fifty-four of his companions who came before the King at Pontoise near Paris, 'naked and with dancing revelry', about the year 1300.

LEAR. What, have his daughters brought him to this pass?
Couldst thou save nothing? Didst thou give them all?
FOOL. Nay, he reserved a blanket, else we had been all shamed.

As for pulling down britches: Conver's version is a cleaned-up version of Noblet's, where his britches are already down. You may think whatever you wish. Ambiguity is wonderful.

robert wrote: If you look at the Charles VI, the kids are gathering stones to stone him, one has already aimed and is about to hit him, ...

Just been re-reading my Émile Māle (Religious Art in France of the 13th Century), where there is a mention of stones and stoning as part of the traditional iconography of the fool :

“In the porches at Paris and Amiens and in the rose windows at Paris and Auxerre...Folly appears in the form of a scantily clad man armed with a club, who walks among stones and at times receives one thrown at his head. He almost invariably has some shapeless object in his mouth. It is obviously the picture of an idiot at whom invisible boys throw stones. This realistic figure which seems to be taken from everyday life, has in fact a popular origin. Following an old tradition, medieval representations of idiots showed them carrying a club – later to become a fool’s bauble- and eating a cheese. In several poems in the vernacular, notably the Folie Tristan, idiots are so described. The artist no doubt followed tradition in conceiving this figure at Paris and elsewhere....~note 4: This traditional figure of an idiot is met with in many psalters, and illustrates Psalm liii, which speaks of the foolish man...

#55 by Pen
The last few posts seem to fit well with no jarring notes - I think we've come to a pretty close understanding of this particular (and worrying) fool, and closer to other Fools too. The forum method can be a most effective one... 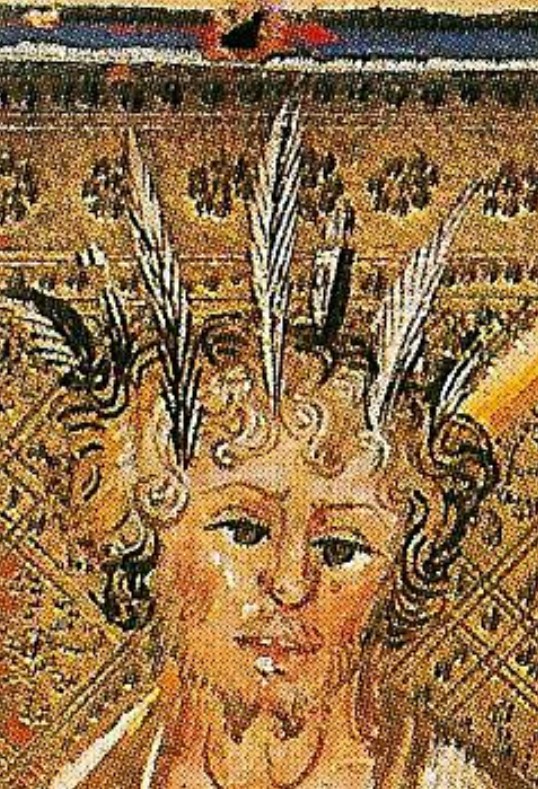 #57 by Pen
Strange. Lightened? and enlarged like that, he doesn't look mentally challenged at all, but simply rather mystical and sad.

#59 by mmfilesi
Melancholy.
When a man has a theory // Can’t keep his mind on nothing else (By Ross)

No, goiter or goitre. Spanish: bocio (?)
Michelangelo is said to have had goiter, too. It was far spread around Milan.