#1 by Ross G. R. Caldwell
Can anybody identify this coat of arms, on the Ace of Denari and Knight of Bastoni? Probably a Sforza device, but more specifically? It looks like it had no design in it, just red and silver halves, bipartito di rosso e di bianco.

Is there a discussion somewhere? 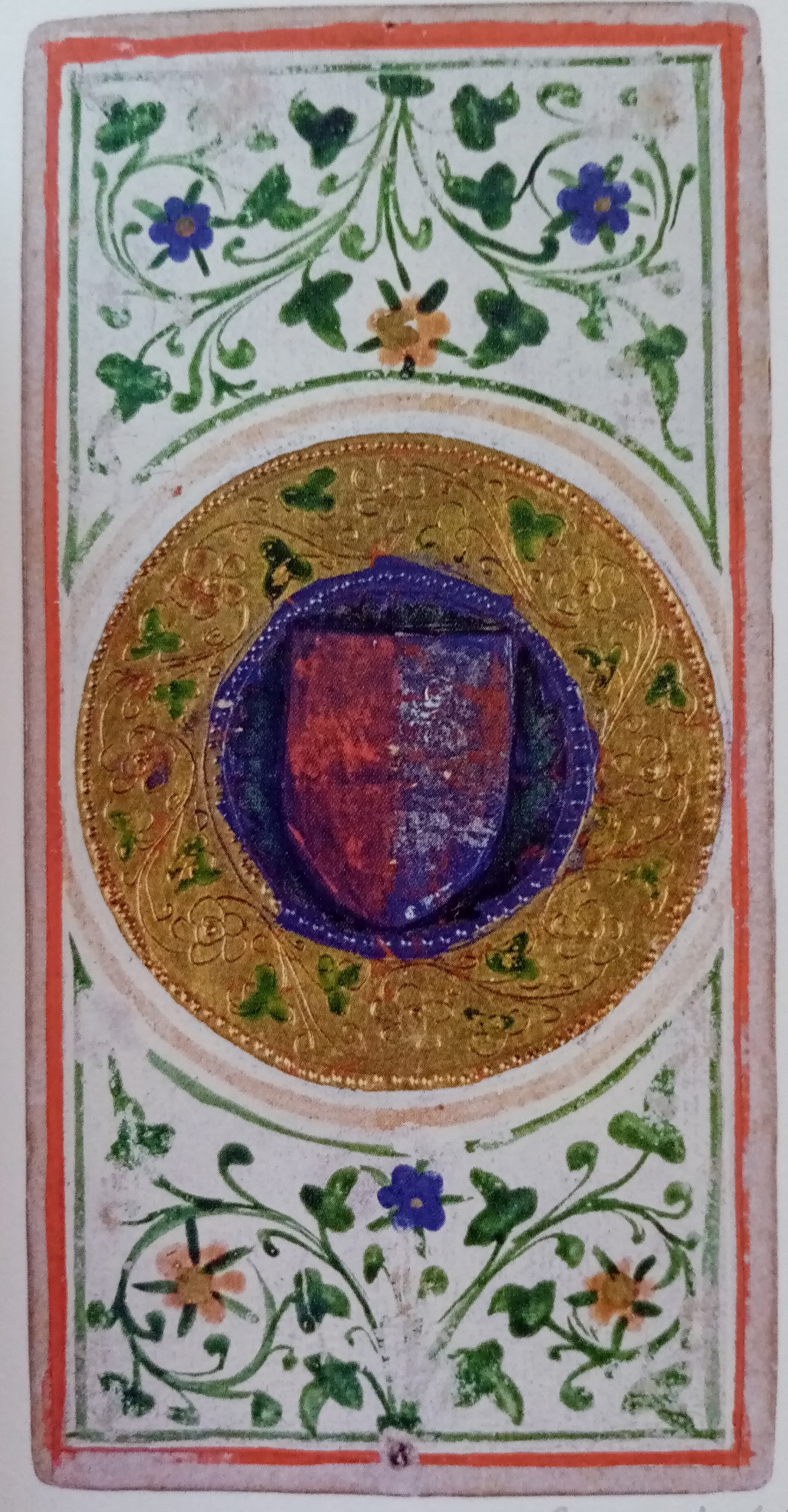 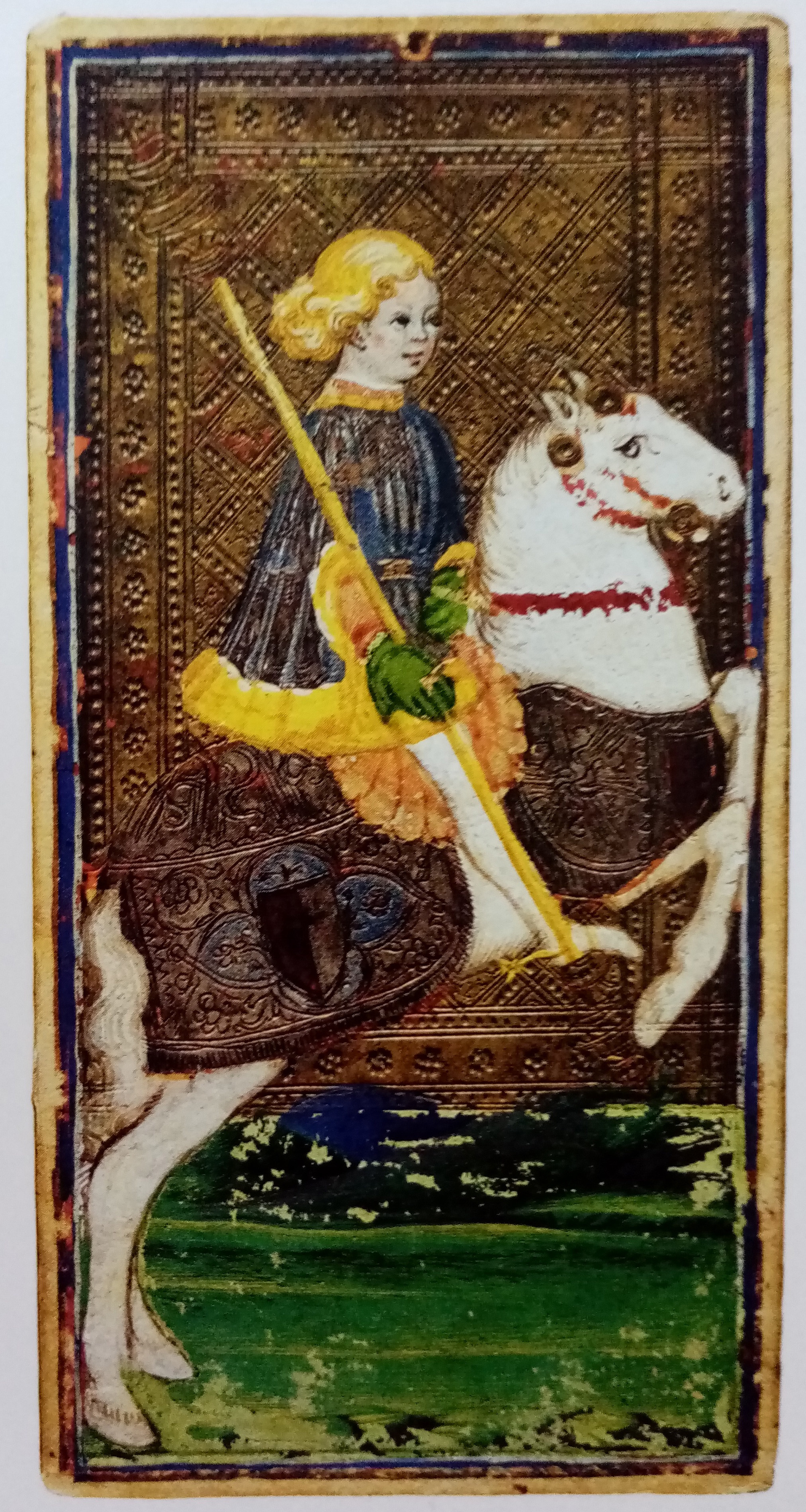 #2 by mikeh
For the Ace of Coins, the best image I could find was in Dummett's The Visconti-Sforza Tarot Cards. Then it is a matter of trying to bring out what is lost, i.e. not there, so with some imagination. 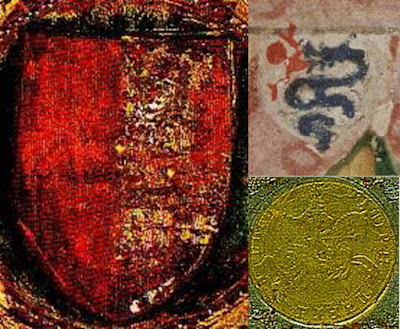 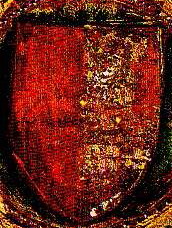 What I see is the Biscione, i.e. Visconti Viper, on the upper right, of which I have put a simplified sample, from the CY Love card, next to the shield. I say "simplified" because the Love card version has one less coil on the snake. That part seems rather clear. Then for the upper right I would say the "rearing horse" from the suit of Coins in the CY/Brera-Brambilla. Below that is even vaguer. My guess would be a smaller shield with the white cross on red of Pavia (the other banner on the CY Love card), or conceivably the red cross on white of Milan. The lower right seems to be a castle rampart of some kind. I may have seen something like that connected with the Visconti or Sforza, but I don't recall. So it seems to be like the logo of the Alfa-Romeo, a composite, but with four instead of two, rather ambitious for such a small card. 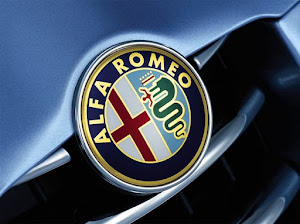 #3 by Nathaniel
Dummett's The Visconti-Sforza Tarot Cards, which Mike just referred to, is the only work I'm aware of where there has been any discussion of these shields. Dummett thought they were most likely just plain red and silver, divided vertically, with no further design elements at all (p. 28, p. 74). He bases that mainly on the Knight of Batons and Knight of Swords, where the shield (always the same shield, it seems) is better preserved than on the Ace of Coins. The images he prints in the book of both of them are clearer than the image Ross used in his post above:

.
On p. 74, Dummett wrote "It does not seem to be the coat of arms of any Italian city, and the only family I have found with those arms is the Bon family, patricians of Venice, with whom there is no reason to suppose that Francesco Sforza had any particular connection. Since we do not know the history of the cards between the fifteenth and the nineteenth centuries, it is possible that they were once owned by the Bon family, who had their coat of arms overpainted onto the cards."

This sounds very plausible to me, especially in light of the fact that the Batons and Swords suits otherwise contain very different heraldic emblems: the Venetian lion of St. Mark on the shield of the King of Swords, and the Visconti-Sforza dove-and-nest device on the clothing of the King and Queen of Batons. It looks as though the original idea was that the Batons suit represented Milan and the Swords suit (the other "martial" suit) represented its great rival Venice—and in that context, the shields on the horses' caparisons seem completely out of place. You would expect a Visconti emblem on the Batons horse and a Venetian one on the Swords horse. You certainly wouldn't expect them to be the same.
mikeh
mikeh

#4 by mikeh
Dummett's conclusion is indeed suggestive. However it would not extend to the original design. Why the Bon family in particular? In any case, it would be worth seeing an image of that Venetian family's coat of arms, as a clue to what its images might have meant in the 15th century.

Nathaniel's quotations from Dummett prompted me to look again at what he says about the Ace of Coins (The Visconti-Sforza Tarot Cards, p. 28):


The shield on the coin was originally red and silver; the silver has tarnished. It has been postulated that there was a design on the silver half of the shield, but it seems more likely that it was plain, like the shields on the caprisons of the horses ridden by the knights of batons and swords.

The Fournier Museum set includes an ace of coins but it is quite different: the single coin bears a design of a three-tiered castellated fortress.

It seems to me fairly clear that Dummett notwithstanding, there was a design on the silver part, both upper and lower, the upper being the Biscione. The lower may well be the "castellated fortress" of the Fournier card, perhaps the basis for my memory of castle ramparts: however my memory is of an image, not of words. It would be worthwhile seeing an image of the Fournier card; my cursory look on Google Images did not turn it up. It would be also worthwhile knowing if this "castellated fortress" appears elsewhere on any Visconti or Sforza card.

If in fact the left side of the card we have was red, that speaks in favor of the lower left having a red background. If so, the most logical choice for a design would be the white cross on red background, since the Biscione is there diagonally opposite, the device on the other banner of the CY Love card. If the others are Visconti heraldics, then probably so is the fourth. That speaks, however hypothetically, in favor of the white cross on red background on the Love card being that of Pavia rather than Savoy or someplace else. I do not recall that the Visconti ever appropriated that device of Savoy as their own.
mikeh
mikeh

#5 by mikeh
Of marginal interest , for its castle ramparts, is this, from . It is reputedly the arms of the Rezzonico family, https://en.wikipedia.org/wiki/Ca%27_Rezzonico, but the palazzo was originally of the Bon family, so perhaps the Rezzonico took over some of the Bons' devices. In 1500, Wikipedia says, it was two houses, which Filippo Bon started making into one palazzo, until his money ran out. My only interest is in the castellation, which seems similar to that in the Ace of Coins shield. Of course this coat of arms is much later, but these things sometimes come out of something earlier. Castellation is probably very common, however. 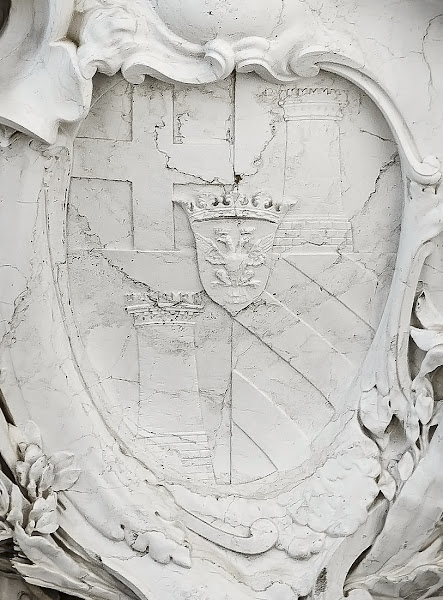 #6 by Nathaniel
Information about the Bon family's coat of arms is here:

Images of it down the centuries are here (following a link from the page above)—the earliest is dated to ca. 1500:

As you can see, it is a perfect fit for what we see on the Knight of Batons and Knight of Swords, and there is really no good reason to think that the shield on the Ace of Coins looked any different before the white paint deteriorated. So Dummett was probably right.

If we want to find out what those shields looked like originally, we would have to use X-rays or something like that to find out what is under that red and white shield, because I think it's highly unlikely that there was ever any other design on top of it.