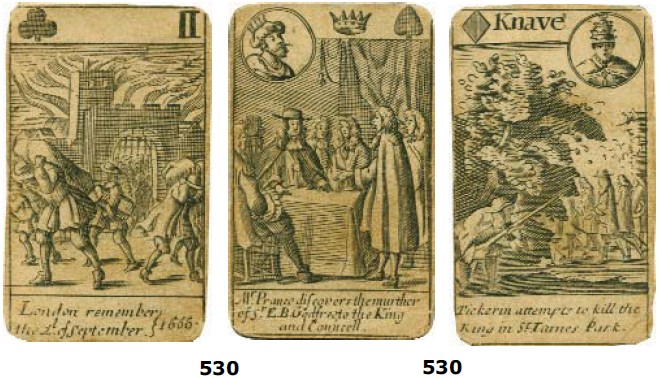 An English article with the focus on the cards:
http://www.xs4all.nl/~pvrooden/Jo/2010a.pdf
... with a lot of the pictures and these in good resolution, though the deck is a Dutch version.

I'm not sure, that these presentations all will tell the same story and perspective ... 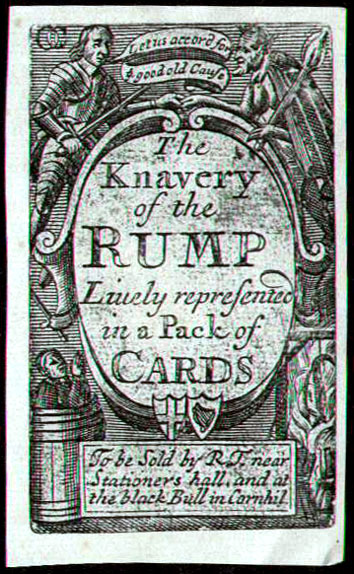 published by "R.T." = Randal Taylor - engraved by Francis Barlow (not mentioned)
(at the top Cromwell with the devil)

The Knavery of the Rump

The title card of the pack establishes the satirical tone for what follows in the subsequent illustrations. It depicts an encounter between Oliver Cromwell and the devil, with Cromwell suggesting that they ought to ‘accord for ye good old Cause’. It also depicts the arms of the commonwealth regime of the 1650s: the cross of St. George and the Irish harp.

One of the main emphases of the cards is on the low social status of prominent parliamentarians and army officers. For instance, on the nine of hearts, attention is drawn to Colonel John Hewson, governor of Dublin in the 1650s, and to his original status as a cobbler. Another card depicts Thomas Harrison, ‘the Carpenter’.

Oliver Cromwell also inevitably features prominently. The High Court of Justice is labelled as ‘Olivers Slaughter House’, while another card presents ‘Oliver seeking God while the K.[ing] is murthered by his order’. Cromwell is also portrayed in a compromising position with the wife of John Lambert. Many other prominent events, such as the trial of the king, are also included and commented upon in a hostile manner. However there is also some far less predictable content. For example, the king of hearts reports that ‘The Saints think it meet that the Rump make a League w.th Oneale’. This is a reference to a short-lived alliance which was agreed between the parliamentary forces and Owen Roe O’Neill in the north of Ireland in 1649. 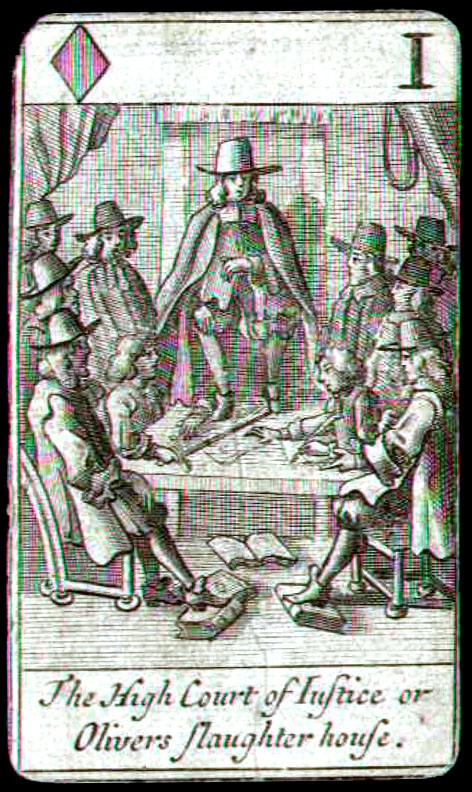 Oliver seeking God while the K.[ing] is murthered by his order 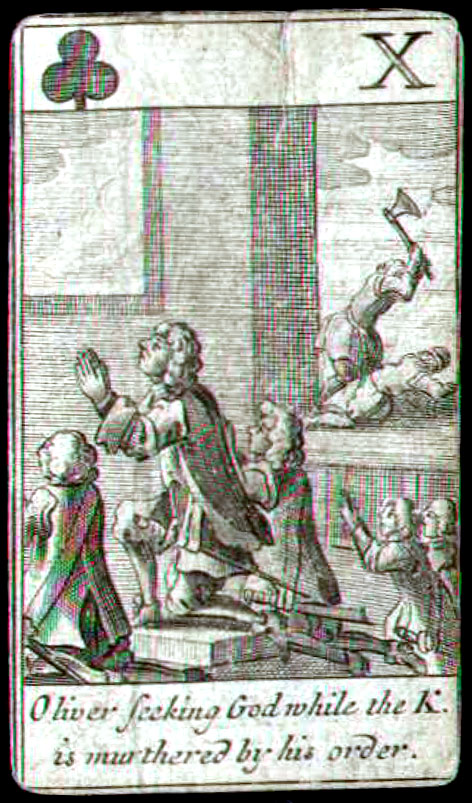 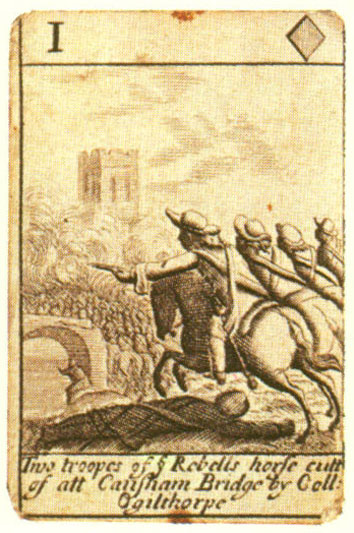 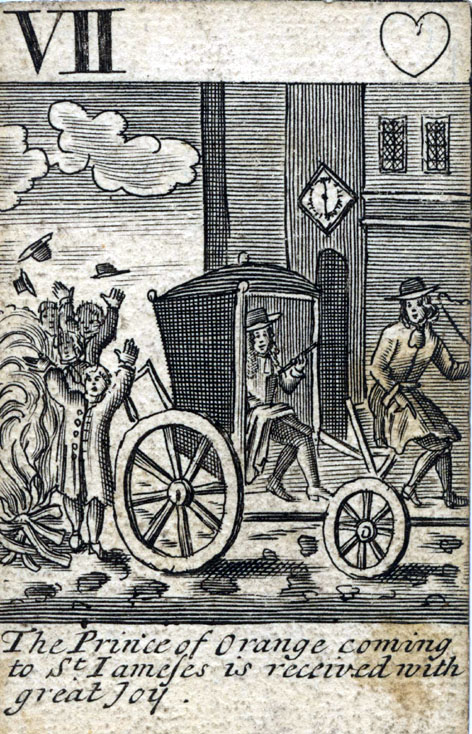 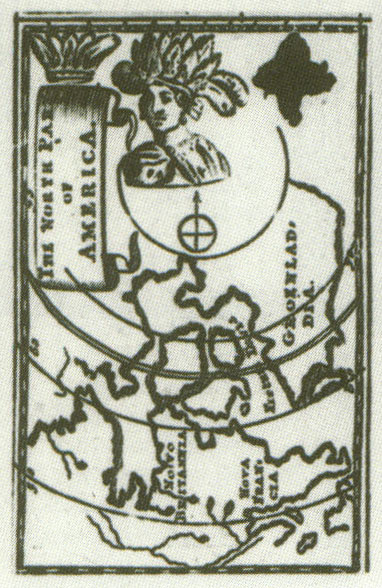 The Moxon family were active as engravers over a long period and produced globes as well as maps. Joseph was known especially for his work A Tutor to Astronomy and Geography published in 1659 which went through several editions.

A further report ..
http://www.pachs.net/blogs/comments/mak ... ing_cards/
... shows, that the author isn't aware, that there is more than one Moxon, but it also has the worthwhile information:

So he made not only one, but 3 decks. And the author is so friendly to provide with two further teaching game producers:

Thomas Tuttell (ca. 1674-1702)
The deck is from 1701 and shows mathematical, astronomical and navigation instruments

The page says about Tuttell ...

Here is another deck, "Engineering", also from Tuttell: 
This set of 52 engraved playing cards is the work of Thomas Tuttell (ca. 1674–1702), a British mathematical instrument maker who was appointed Instrument Maker to the King in 1700. The set was probably issued by Tuttell as a trade catalogue, a clever and entertaining way of broadcasting the high quality of his workmanship and the breadth of his scientific knowledge. Each card in the deck depicts a tradesman at work (millwright, bricklayer, "carpentor," architect, miner, etc.) or a particular instrument or tool, such as the "tryangular quadrant," charts, scales, and the "cross-staffe." Each card bears an appropriate description, as this for "the Compass": "This rarity is Said to be handed to ye World 400 Years agoe to the mighty improvem[en]t of trade & Navigation, also Surveying, Minening Dyaling &a." Tuttell published The Description and Uses of a New Contriv'd Eliptical Double Dial in 1698, and two years later he was appointed "mathematical instrument maker to the King's Most Excellent Majesty." He was drowned on January 22, 1702, while surveying the River Thames.

John Adair, 1660-1718. [A new map of England, part of Scotland and
Ireland and adjacent parts of France / by John Adair]. Scale [ca.
1:568,000]. [London: William Warters & John Lenthall, 1709]. 1 map
(37 cards): 1 hand col.; each card 10 x 6 cm.
This is an exciting acquisition of an extremely rare collection of map
playing cards. The original map was drawn by John Adair, a Scottish
mapmaker, and published in Edinburgh in 1689; only one copy is
known, held in the British Library. The engraver, James Moxon, had
been brought to Scotland to prepare maps for Sir Robert Sibbald’s
ambitious atlas project, but soon returned to London. It is assumed
that he took the engraved plate for this map with him, as this second
state was published in London, by John Lenthall, who specialised in
selling playing cards.
Map playing cards were fashionable in the late 17th and early 18th
centuries, and the map was dissected into playing cards, marked with
suits by a coloured stamp, and numbered by hand. This incomplete
‘harlequin’ set includes 37 playing cards from the total of 52, and
according to the dealer was acquired from at least three separate
sources. Cards were sold uncoloured, coloured, and gilded; one of
these is hand coloured and is known to have been in the collection of
Sylvia Mann, a noted playing card collector, who has written about her
search for other cards in this elusive and rare set.

This seems to say, that Adair's deck is actually Moxon's deck, if I understand this correctly. Further there should be a Lenthall deck, which I don't see in the moment.

Returning back to Moxon, I see another Moxon deck in our Museum ...

... which possibly is one of the two others above mentioned as "astronomical" ... 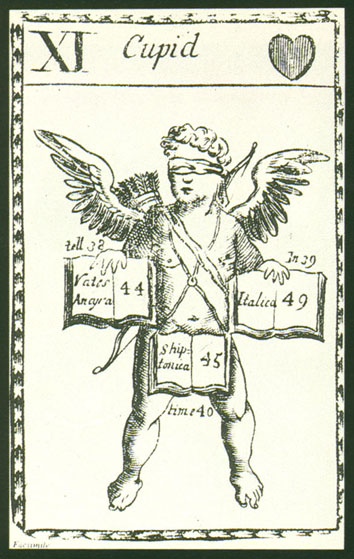 This one looks to me like the card version of a fortune book.
Many amazing decks in this thread. Thank you Huck!

marco wrote: This one looks to me like the card version of a fortune book.
Many amazing decks in this thread. Thank you Huck!

Yes, of course, but I ask me, how it operates in detail. It should have had a text-book with additional explanations.
Huck
http://trionfi.com

#37 by Huck
... luckily I opened a book, and saw Lenthall Pack No. XVIII, just the deck in question.

... that article appeared in IPCS vol. VII, No 1 August 1978 by Virginia and Harold Wayland

"Fortune Telling Cards, pleasantly unfolding the good and bad Luck attending Life.". With Direction to Use the Cards. Lenthall Broadside 1724."

The authors see a first indication of the existence of Lenthall Fortune telling cards in an advertisement in the British Mercury of 12-15 October, 1711.
The Waylands have located 13 full or partial packs in different collections - much of the decks have a "Use" card and knave of Clubs with "Hewson the regicide" ...

... who in January 1649 signed the death warrant for Charles I (and died himself in 1662). The Waylands tell, that this had led to many wrong ideas about the person of Lenthall and the age of this deck ... for which they partly make responsible Rev. Ed. S Taylor and his History of Playing Cards, page 209, which should be this one:

The "Use card" are two cards and they are printed in the article. Newspaper advertisements for the deck are found in a period of 50 years later (after 1711) mostly during the autumn season, so it is suspected, that it sold best in the Christmas / New Years's time.

According the Waylands there was another, earlier, publisher of the deck: Dorman Newman, a book-seller in London 1665 - 1693. The deck was first published (as known by an advertisement) 1690 - as far this is known. Dorman Newman went bankrupt in 1694, and as next publisher of the same deck appeared a Hugh Newman (a relative) in 1699 and 1705 in advertisements. The designer stays unknown ... so the Waylands in 1978.

Moxon is not mentioned by the Waylands, though they mention earlier interpretations with earlier datings.

How to use the cards: Take a questions of the Kings (4 kings, each has 5 questions and each question has letters and numbers). 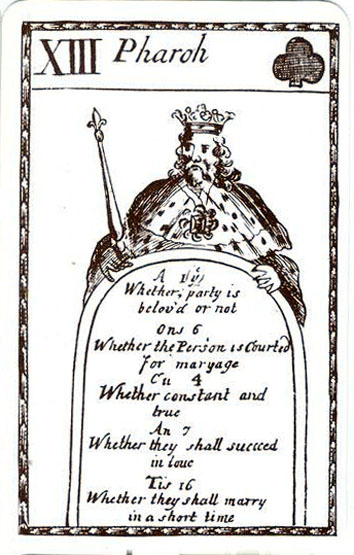 Each letter combination leads to a wheel, found at the 20 odd-numbered cards (1-3-5-7-9), which use the 12 zodiac-signs, the 7 planets and the 20th is an Omega.
Now the cards are shuffled and if you get (for instance) a "Queen", then it's "12" and you go to the already selected wheel card, which belongs to your question. There you look at the inner ring for "12" and not the results at the two outer rings. In this case "tell" and "38". Now you look at the Queen and Jack cards, if you find "tell 38" 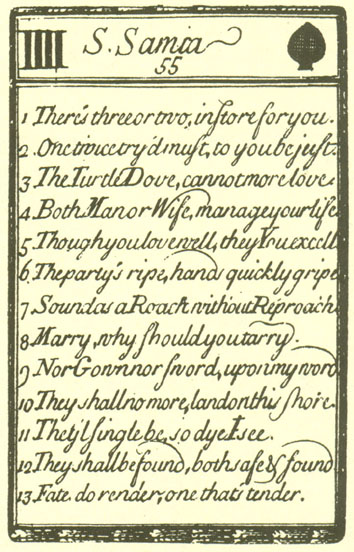 In Taylor's book (which got the critique by the Waylands) I found two other notes about Moxon: 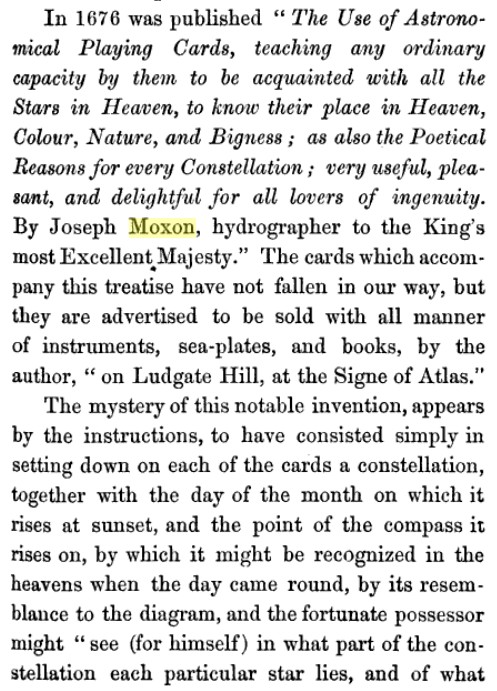 It seems, that we here find the reason for Sascha's error about these cards (it seems plausible, that he got this error from somebody else).

From Taylor's description the deck doesn't fit with the Lenthall deck. This deck is advertised 1676 and if one doesn't identify it as lot book, one easily might think, that it is an astrology deck. .

But who knows ... possibly since 1978 somebody has explored something different. 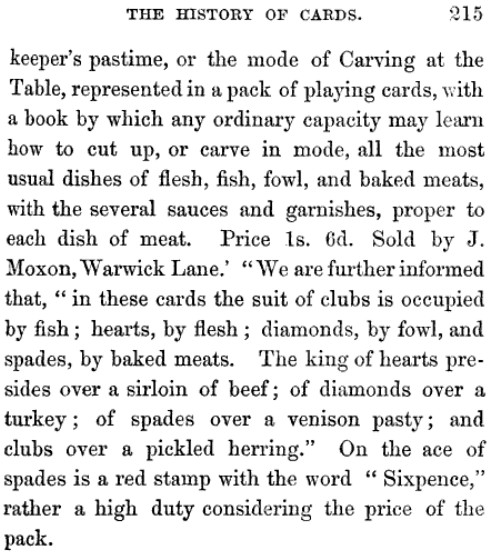 This seems to be a real 4th Moxon deck, the description doesn't sound astronomical, astrological and isn't for sure not geographical.


A further report ..
http://www.pachs.net/blogs/comments/mak ... ing_cards/
... shows, that the author isn't aware, that there is more than one Moxon, but it also has the worthwhile information:

Now I would say:

* Astronomical Playing Cards, which cost 6d
this from 1476 ?

* Astronomical Cards, which cost 1s for plain ones up to 5s for a colored and gilded set
this from 1492 ?

Or are both the same?

The 1476 production is announced with the same title

* Geographical Playing Cards, which cost 1s for plain ones up to 5s for a colored and gilded set
This we have in the Museum

* The Carving Board playing cards ... and this might be the fourth Moxon deck ... or the 3rd?
Huck
http://trionfi.com

This particular card game, however, had chosen a curious subject matter for its ‘pleasurable lesson.’ Its jokers promised a satire on the bull Unigenitus, promulgated by Pope Clement XI in 1713 to end the Jansenist controversies in France.

A long article of the deck, which was published 1719 as "De Nieuwe Constitutie Kaart". 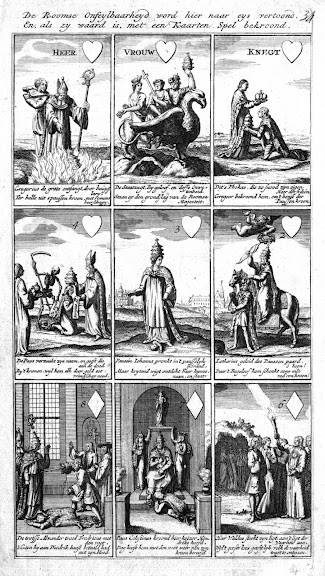 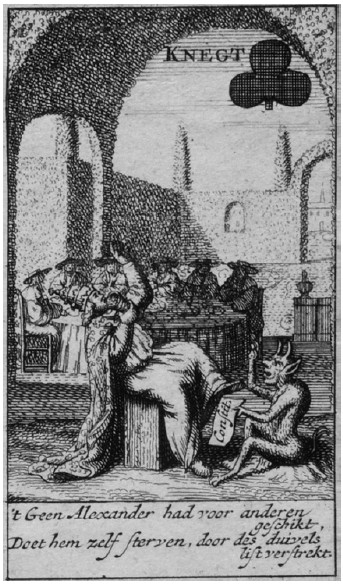 Pen (looking forward to reading all the links later, when I've more Time.)
He's not the Messiah, he's a very naughty boy...

Pen (looking forward to reading all the links later, when I've more Time.)

Yes ... she is intended to be understood as such.
Huck
http://trionfi.com