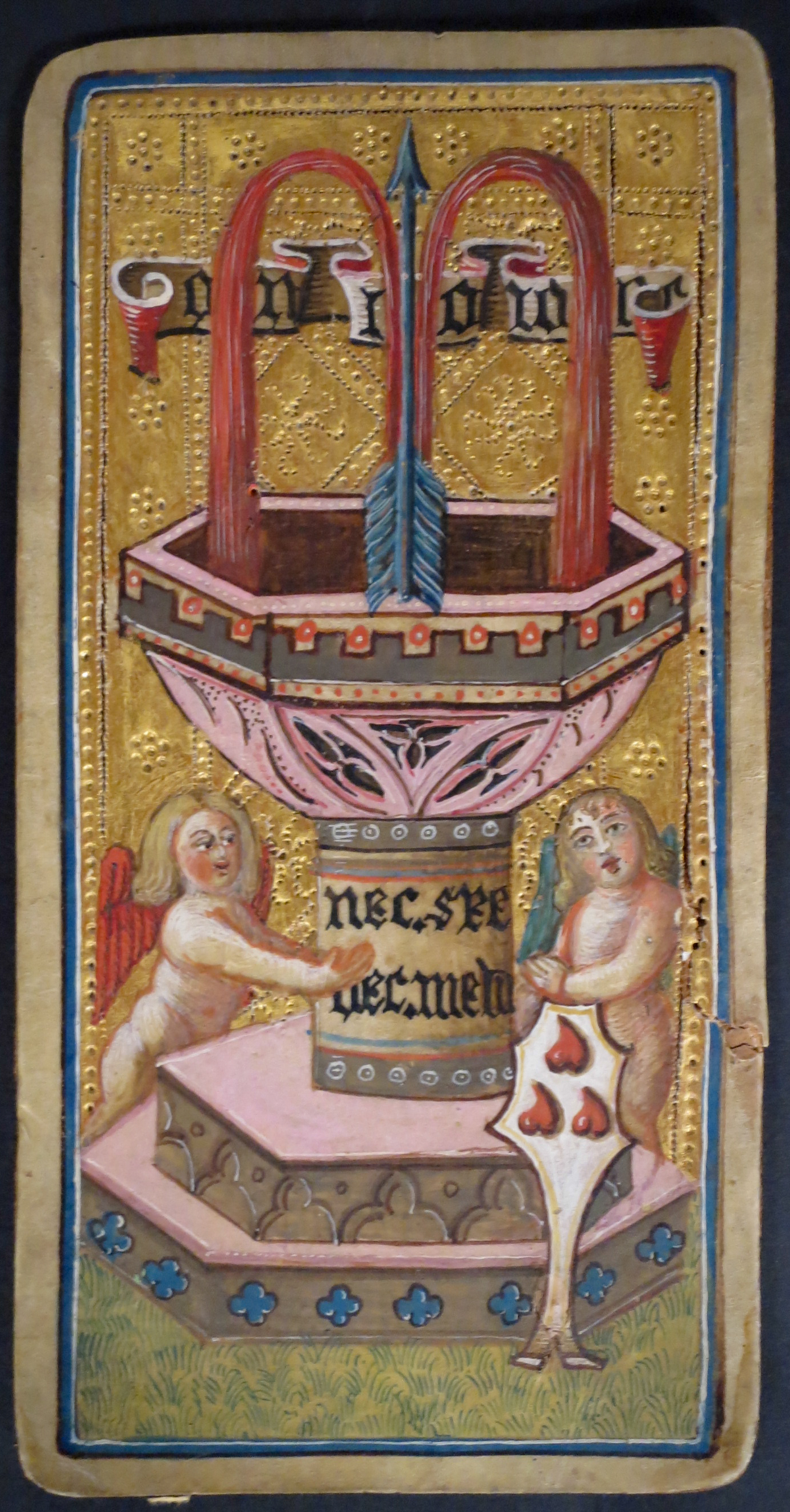 I was going to argue the lack of red splitting the shield horizontally meant fake (or at least a near contemporary copy by someone who didn't care to exactly match Colleoni's stemmi) , but it appears that house at least used all white in this quartered version from a c. 1530 fresco at Malpaga: 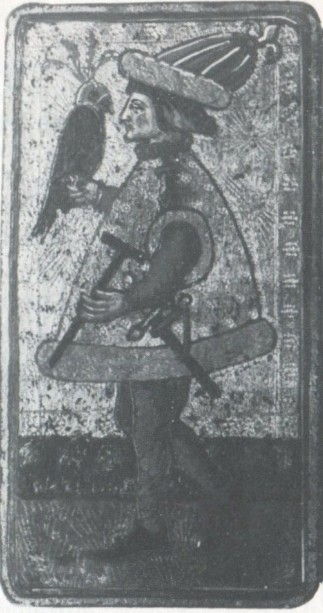 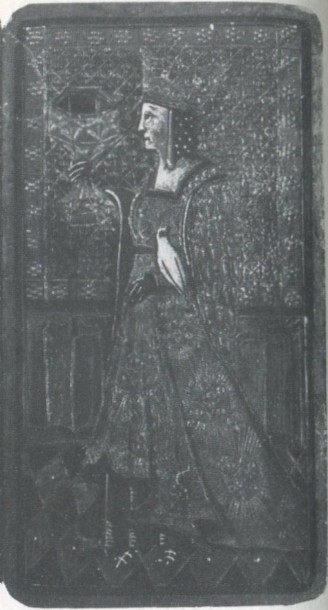 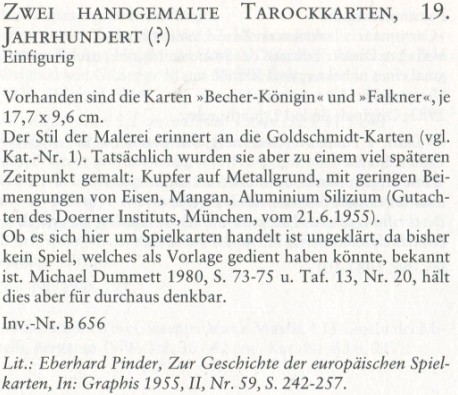 The German comment says: Likely a remake of 19th century according a technical research of 1955. The first is the falconer, the second was identified as "Queen of Cups" (possibly also with a falcon at the left arm ?).

It's rather obvious, that this falconer is very similar to the falconer at Kaplan I, Rosenthal Tarocchi, p. 99. The so-called "queen-of-cups" (plausible, if one looks at the picture in the book), however, is very similar to the Star in the same deck type (I didn't find a Queen of cups in all the variants, that I know). The Star Queen (or King ?) also seems to have a falcon on her left arm. . 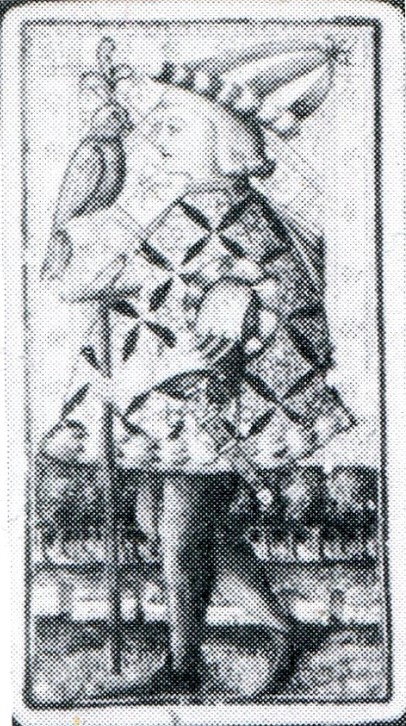 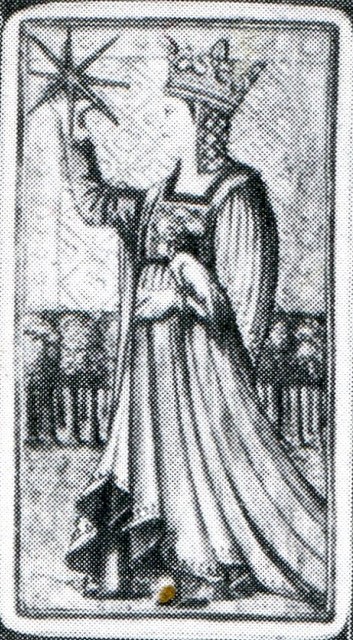 The following picture is from a deck, which is not under suspicion to be a modern forgery. It presents the same Star with King as the Rosenthal Tarocchi. 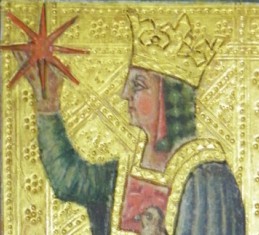 #63 by Huck
Somehow this is part of an older discussion

Christies auction, sold from the Kaplan collection, card is given to 19th century 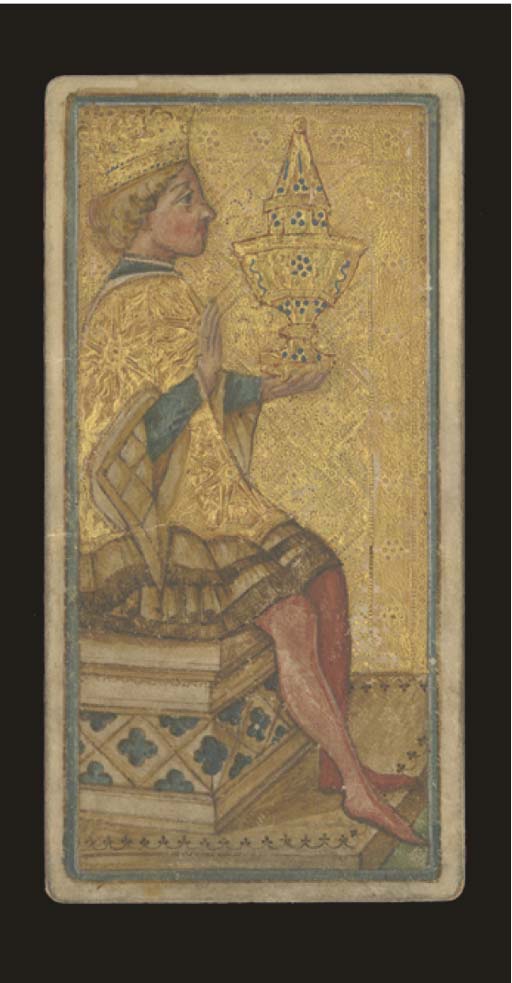 Visconti-Sforza, King of Cups Tarocchi Card, Milan, circa 1900s?, artist unknown, painted on parchment and underlaid with paper and cardboard, upper two thirds of background is leaf-gilded and tooled. The king faces to the right and holds a large ornate vessel in his left hand while he makes the sign of benediction or greeting with his other hand. The heraldic device of a sun appears on the king's cape. The king's bulging eyes and sunken cheeks are similar to the king of cups, facing to the left, of the Von Bartsch Visconti-Sforza Tarocchi cards. Back is plain reddish brown. Size 6 11/16 in. (17.1.) high, 3 3/8 in. (87 cm.) wide. Kaplan I & II, var.

My comment:
Very similar to the Rosenthal King of Cups
Huck
http://trionfi.com