Compare and Contrast: The Fool

Re: Compare and Contrast: The Fool

#11 by robert
Here's the Vandenborre "Baccus" Tarot, compared with the Vieville: 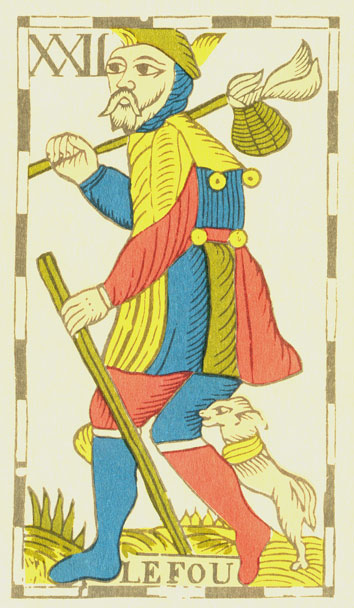 Now this is interesting.

I think it's pretty clear that the Vieville is a better sample, and that the Belgian is clearly related, if not based off of it. The Vandenborre loses the head on the napsack stick. The ears are there on the hat, but less clearly defined and the feathers are gone. There's something on the Vandenborre Fool's knee that makes no sense to me when compared to the Vieville. But the big surprise for me is the clear additional bell on the collar, and when compared to the Vieville, I can see where the same bell is, but it is not defined on the Vieville. So, it's interesting to think that if the Vandenborre was based directly on the Vieville, how would he know about the bell there? Maybe it was more obvious to others and I just missed it on the Vieville? Or did he look at it and think, "Well, there ought to be a bell there."? And also curious is that the Noblet/Dodal/Payens are have no bells on the collar, but the Chosson/Conver have them (although graphically different of course). I find this somewhat surprising because, as we'll see, the Vieville tends to agree with the Noblet/Dodal/Payens very often, but in this particular instance, the Chosson/Conver and the Vieville share this iconographic detail in common.

Re: Compare and Contrast: The Fool

I think it's pretty clear that the Vieville is a better sample, and that the Belgian is clearly related, if not based off of it.

I can imagine the Belgian cardmaker somehow getting hold of a very worn Vieville deck and giving it to the workshop to copy. The head on the stick on the Vieville might easily have lost its detail and appeared much as it does on the Vandenborre. The extra object on the knee might have evolved from dirt, spillage or even a pen mark. The most interesting difference of all to me is that the little creature has evolved from being predominately feline to more obviously canine. The images are so similar, the style so different. These close comparisons really bring the relationships between decks into focus.