Women with a book and a cross

Re: Women with a book and a cross

#11 by mikeh
I want to comment on something Phaeded wote.

Another possible influence on the iconography of the Papess is the Annunciation festa performed in the San Felice in Piazza in 1439, as described by the eye-witness, the Russian diplomat Abraham, Bishop of Suzdal, who attended the Council of Florence in 1439; he describes the Virgin Mary in a domestic space in advance of the acted scene as such:

In this grand and wonderful chair a beautiful young man sat, dressed in sumptuous and wondrous maiden’s garb, a crown on his head and a book in his hand from which he was reading quietly. From this is deduced that he represented the most pure Virgin Mary... (Kristin Phillips-Court, The Perfect Genre: Drama and Painting in Renaissance Italy, 2011: 36)

The sumptuousness is out of keeping with the PMB Papess (who takes on the modest dress of a Poor Clare) but the book and crown attributes are fitting, and the cross is of course missing as the crucifixion is a future event. But why would Mary be crowned in an Annunciation play? I can’t find a pre-1450 Florentine painting that shows her crowned in an Annunciation – that attribute is almost always for her Assumption.

And what kind of crown? As for the meaning of the three crowns on the papal tiara in the context of Papess as “Church/Faith” – I believe they stand for the three levels of heaven, hell (or rather purgatory for those to be eventually saved), and earth represented by the Church Triumphant/Suffering/Militant:
.

..the Church meditates on the Communion of Saints, which is the charitable link with the faithful who have already reached heaven (Church Triumphant), the faithful departed who are still expiating their sins in Purgatory (Church Suffering) [who were still considered as part of the Church] and of the pilgrim faithful here on earth (Church Militant). "In this wonderful exchange, the holiness of one profits others, well beyond the harm that the sin of one could cause others. Thus recourse to the communion of saints lets the contrite sinner be more promptly and efficaciously purified of the punishments for sin." (Catechism of the Catholic Church, 1475).

Keep in mind the main thing Cosimo received for Florence from Pope Eugenius during the elaborate consecration rituals of the Florence Cathedral in 1436 was 10 years’ worth of indulgences (reduced time in Purgatory – a concept we hardly even fathom any more, but was central to the Council of Florence debates with the Greek Orthodox).

I don't see where the eye-witness supports a tiara, as opposed to a Queen's, Empress's, or Charles-VI-Pope's. But let us suppose it is. Papal-like crowns on a woman occurs most often in pre-1440 Northern Italian art as part of a "Coronation of the Virgin" scene, in which all the members of the Trinity are often present. So I would think the three levels, and also the three crowns of St. Catherine in Marco's image, represent the Trinity.

First, by '"papal-like crown" I mean to include not just the three-tiered ones, but also the one on the left below, from the Charles VI, assumed to be Florentine early 1460s. The image on the right is Hermes Trismegistus, who is given a similar crown in the Siena Duomo, 1470s. (It's a Sienese image I happened to have.) For a Milan-based image, I don't know, without further thought, if I'd include that shape, but it's ok here, because I'm dealing with Coronations done by artists from Florence and Siena. I assume that a Charles VI Popess would have had a similar headpiece. 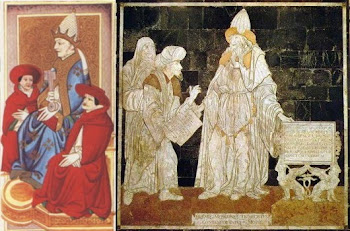 Here's an example, said to be c. 1400, probably Pisa, by the Sienese painter Martino di Bartolomeo, who was working in Pisa at that time but moved back to Siena in 1405 (http://en.wikipedia.org/wiki/Martino_di_Bartolomeo, which has the whole altarpiece): 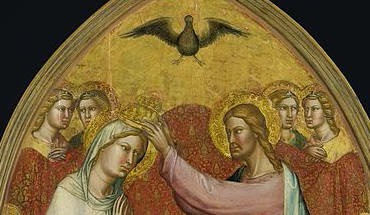 Perhaps I am imagining things, but it seems to me that there might be a third level on this crown, at least in outline. I would very much like to know what church this is from and who commissioned it. All I can get on the internet is "Los Angeles County Museum of Art, Randolph Hearst bequest". When I go to LACMA's site, it's not there. In any case, the composition as a whole is a visual triangle, as in fact all of the altarpieces I am going to post are. Surely the most common denotation of the number 3 and its triangles, including the triangular arch of the Gothic cathedrals, in the Middle Ages was the Trinity.

Another papal-like crown is in a 1418 Lorenzo Monaco Coronation, Church of the Angels, Florence. The whole altarpiece at http://en.wikipedia.org/wiki/Coronation ... _Monaco%29). The detail below I get from Eisenberg, Lorenzo Monaco: 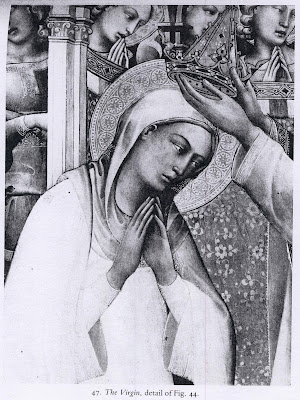 Here the three-petaled floral design on the crown and the triangular pyramidal shape convey the same message of the Trinity.

Another papal-like crown is by Gaddi Agnola, a Florentine, c. 1380, possibly for the church of San Giovanni de' Fieri, near Pisa (http://en.wikipedia.org/wiki/Agnolo_Gaddi): 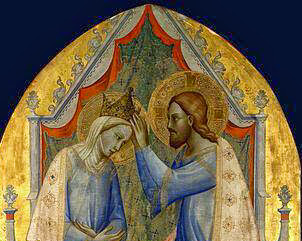 Very similar is one done 50 years later by Bicci di Lorenzo, c. 1430 (second image at http://ca.wikipedia.org/wiki/Bicci_di_Lorenzo).This was for Santa Trinita in Florence. 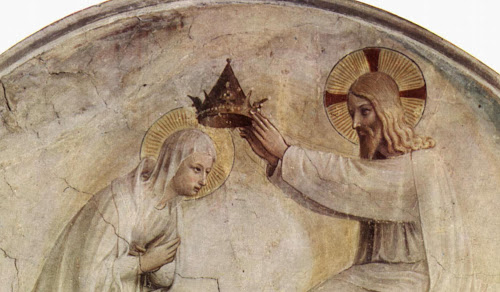 These last three retain the triangular appearance, although the shape is probably conical. The circle was the most considered the most perfect shape (which is why the planets' orbits had to be circular, I believe).

After Fra Angelico, I can't find any such Coronations in the 15th century (as though the image had been co-opted by something else?). But it could be that some have eluded me.

There's no book in the hands of these Virgins, of course; that wasn't part of the "Coronation" convention. But I think that what works for a Coronation would work for an Annunciation as well. It's the same cast of characters. And whatever else, aren't these crowned Virgins beautiful!