The World - Bless my Soul

The World - Bless my Soul

#1 by robert
I've wondered for some time who/what is displayed on the World card in the Marseille Tarot.

I've pretty much assumed that the scarfed figure is Fortuna. 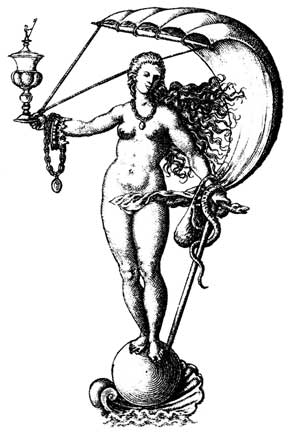 Of course, Sophia is a common attribution; and I'm sure there are others as well.

I've always had a hard time though avoiding the "four evangelists". That's a pretty darned Christian interpretation to have, and needs to be considered in any explanation.

The caped figure has always been more difficult. The figure is nude, or partially covered. Here are a few examples, the Sforza Castle, Jacques Vieville, and Jean Dodal:

Originally, I assumed this was Christ. Christ in Glory is such a common image, dating hundreds of years before tarot, and carved on countless cathedrals though Europe. Heres one from Chartres Cathederal:

What's bothered me about identifying this character with Christ is that I've never seen an image of Christ in Glory where he is naked. Hmmmmm.

Last year, I stumbled across a couple of images that make me wonder if the naked figure is simply a depiction of "a soul"?

Here is the whole side of the sarcophagus:
http://www.tarothistory.com/images/donaworld.jpg

The book describes it as:

"One of the most important works of the Spanish Romanesque period not connected to an architectural structure is the sarcophagus of Dona Sañcha, daughter of King Ramiro I and the widow of the count of Toulouse; it used to be kept in the convent of Santa Cruz de la Serós not far from Jaca. On the front, underneath arcades, are two scenes in memory of the countess who died in 1097: on the right Dona Sañcha herself is depicted between two nuns or maids, and on the left is her burial. In the center, the soul of the dead is shown by two angels within a mandorla, an image of salvation."

Here's another example of a similar depiction: 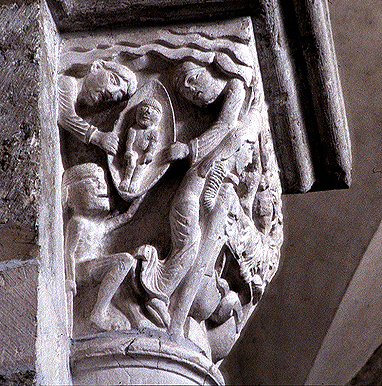 The caption for the image says:

Lazarus' soul in infantile innocence is carried up to Abraham's bosom in a mandorla.

Is the depiction on the Tarot de Marseille I World card simply a "soul"? Has anyone ever come across similar representations before?
The Tarot will lose all its vitality for one who allows himself to be side-tracked by its pedantry. - Aleister Crowley
jmd
jmd

#2 by jmd
If the mandorla represents a kind of opening of the veil from this world into that of the spiritual, then the general form can be used to represent either a birth into the spiritual realm or, alternatively, a manifestation from the spiritual into this world.

There are two specific points on which I entirely agree with you, Robert, and continue to cause me some hesitation and iconographic hesitation or, rather, conflict - even though I often write with as though the figure of Christ is 'clear' in terms of the depiction.

The first, as you mention, is the relative paucity of representing Christ as nearly fully naked with only cape behind - though we can of course interpret this in various ways. So there is in that sense no clarity that Christ is intended.

On the other hand, those four evangelists at the corners in representation certainly hint that here and within is indeed Christ. But Christ, I would suggest, as second Adam - hence both his nakedness but also what appears as leaves over his genitals in both the Sforza Well card and Tarot de Marseille-I.

If it is somehow as second Adam, then, I would suggest, we perhaps need to also have more of a look the Milanese Guglielmite sect, for Christ's return would be as woman and as incarnation of the Holy Spirit. Increasingly, I am lead to consider the representation of this card as Christ's manifestation not as simply "Jesus", but as Christ who is ONE with the Father and the Holy Spirit and can thus manifest in various 'form'.

What is also incongruous with more standardised representation are the positions of the lower two animals: only the Vieville (of the ones above) show the standard order within Catholic tradition... even the Sforza Castle image inverses only the two lower figures from standard depiction (in that sense, it is certainly very much a "Tarot de Marseille").

This is A Soul going to heaven 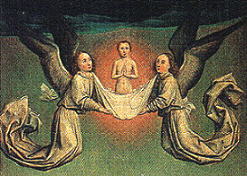 This is rescuing a soul 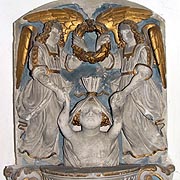 You reading my mind Robert

~Lorredan~
The Universe is full of magical things patiently waiting for our wits to grow sharper.
Eden Phillpotts

jmd wrote:What is also incongruous with more standardised representation are the positions of the lower two animals: only the Vieville (of the ones above) show the standard order within Catholic tradition... even the Sforza Castle image inverses only the two lower figures from standard depiction (in that sense, it is certainly very much a "Tarot de Marseille").

What's also interesting it that the Vieville is the only one to have a halo, not only on all for of the evangelists, but also on the figure.
The Tarot will lose all its vitality for one who allows himself to be side-tracked by its pedantry. - Aleister Crowley
jmd
jmd

#5 by jmd
Glad you mentioned the Halo on the central figure, Robert... to my eyes, that was also one of the features that appears to be the case on the Sforza Castle card, though not as distinct.

Great images, Lorredan, and I do agree that there are a number of representations form the time of what might be called either the World Soul or other that call to mind the World card.

What's interesting about one of the images you present (from whence is it?) is that you have called it the 'World Soul', yet, interestingly, is uncharacteristically masculine if such.

#6 by Lorredan
Well jmd I have a coffee table book (Medieval/Renaissance astrological illuminations)that does not give credits for the images within.

I have to surf to find the images and I usually find them in images if I put in the search 'medieval astrology images'.
Here is one from my book that I found in images, but as usual it does not say where from.

It did say as my book said The central kneeling figure by the wreathe is a traditional 'World Soul' figure.
I find that many images that should be genderless in Medieval and Renaissance times end up with the suggestion that they are male. I have presumed that that is because the illumination was painted by a male in a monastery- or if he is not sure he makes the lower half of the body hidden. The example is the first soul carried to heaven is a female Saint- so she never seems to get a complete body. I have seen prayer book illuminations with both male anatomy and breasts- seems bare breasts are ok but genitalia is not. Maybe they were not sure what bits were required. :o The males are normally inadequate or juvenile to the extreme. It kind of reminds me of the fig leaf cop-out. ~Lorredan~
The Universe is full of magical things patiently waiting for our wits to grow sharper.
Eden Phillpotts

#7 by debra
In the context of the context, what would be the "final trump" after the trumpet blows in XX? Is Judgement the resurrection, and XXI is then....what?

God in Heaven,and we can see God on the card?

or Us in Heaven, dancing with the apostles?

#8 by Lorredan
Great question Debra!!
It answers something else for me.
I always figured Judgment was the 'card' of the sequence and I think the Fool and the World are the last two cards as if to say of final outcome...'
How sweet is mortal sovereignty (Fool thinking not of the future)= Foolishness
How blest the paradise to come (The soul's best option) =Prudence
So I guess I think it is not God/Jesus but our souls in victory because of the teachings of the Apostles?
~Lorredan~
The Universe is full of magical things patiently waiting for our wits to grow sharper.
Eden Phillpotts

#9 by debra
That makes sense to me, Lorredan, but I truly don't know. Thinking and reading about tarot has reinforced my sense that growing up not Christian--and especially not Catholic--I just don't see the same world. Even not having a serious concept of "judgement day" seems to make it harder for me to see the older meanings of these old cards.

I would guess, though, that the cardmakers may have similar ambivalence. Who do you think they thought was in the middle of the vestica? I can just as easily see Jacques or whomever mumbling as he carved away on the block, "Yes, here's a dancing Jesus" as "Here's the everyman Hermaphrodite."

#10 by EUGIM
Hello my friends (fire never ends )...
Wonderful images Robert !
I am more close to think the central figure as Christ so not Jesus as JMD pointed it.
I m also agree with Lorredan as an allegory of the World Soul (Anima Mundi)
Here I found an image that I feel link both concepts.
From the Tratte dai Codici Miniati Della Cattedrale di Cremona
http://digilander.libero.it/gregduomocr ... ndorla.jpg