This seems to be an interesting story, as we find again persons connected to the Lazzarelli-hypothesis: ...

... but seems to be painted in the time of pope Leo (Giovanni di Medici) or late Julius (the picture address is "iconografia/prot_1512.jpg", possibly indicating, that the work is given to 1512 (which would be then commissioned by Julius).

Here's a picture of an older exhibition. In the background is Apollo and Muses with similarities to the Mantegna Tarocchi: 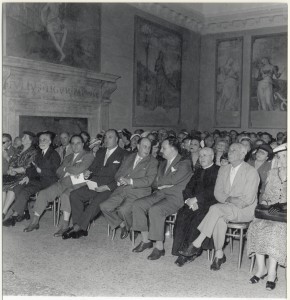 Some pictures in color are given at this flickr page:
https://www.flickr.com/photos/dealvariis/16331827001/

The earlier search was totally negative (if nothing else has happened meanwhile to contribute to the question, which I don't remember). But here it is. 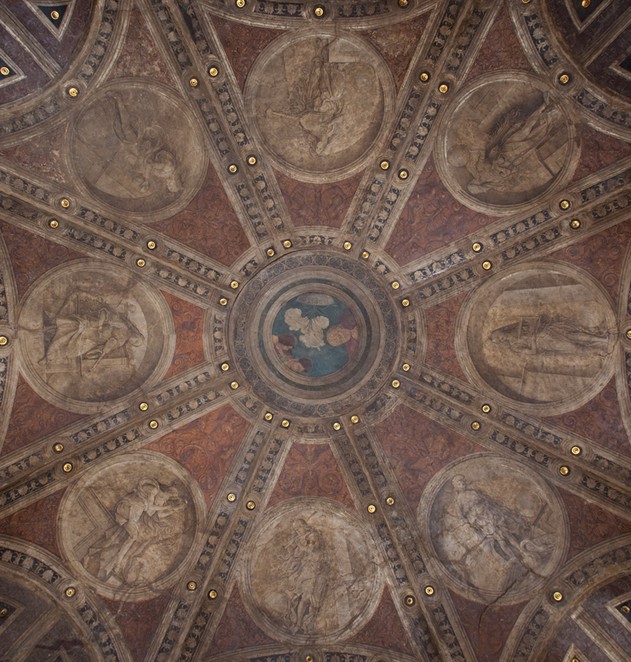 http://www.vam.ac.uk/content/articles/a ... m-cremona/
... gives a movie about the restoration work and a little larger picture.


This domed ceiling was originally located in a ground floor room of the Casa Maffi in Cremona, Italy. It was painted in about 1500 by a local artist, Alessandro Pampurino, and is decorated with frescos depicting an old man, a boy and a woman listening to the Muses. Eight smaller lunettes are painted in imitation of bas-relief with heads of Roman emperors and their wives, probably based on ancient coins. Many of the figures, particularly the Muses, bear a marked resemblance to those on contemporary tarot cards. 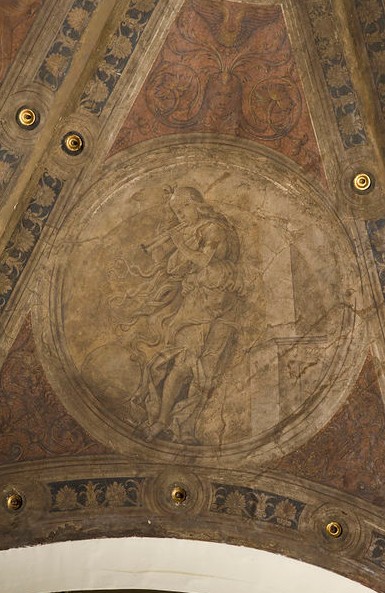 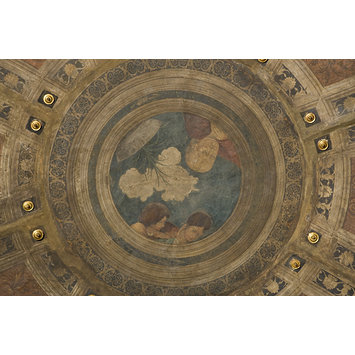 
7. sixteenth-century model book based on the "Mantegna tarocchi' (Paris, Bibliotheque de l"arsenal, fr. 5066), in which the pictures are accompanied by short explanatory French verses

Did Hind mention this one?

Whow, I found it ...
... we should have found it earlier.
There are some pictures similar to the Mantegna Tarocchi: 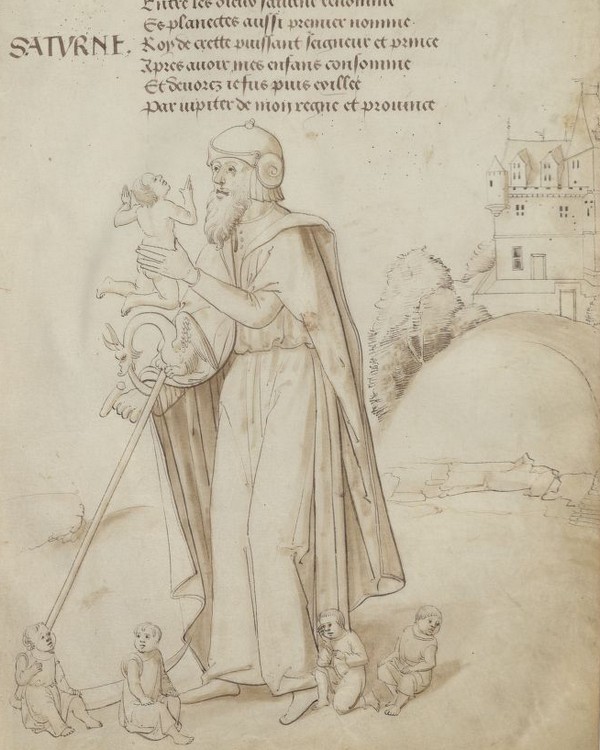 15 of the 19 gods belong to the 16 gods in the "Eschecs amourex" of Evrart de Conty, only Asclepius is missing. Additional are Ceres, Hercules, Iris (Isis ? it's handwritten and the picture is not clear) and Thetis. The motifs of some of the gods have greater similarities to the presentation used by Eschecs amoureux editions.

The "De deorum imaginibus libellus / Albrici / Reg. Lat. 1290" contains Ceres and Hercules, but not Iris/Isis and not Thetis. Thetis is combined with 3 winds and Flora, and Aelous (father of the winds) is part of the Albrici. The Albrici has additional to the 18 of the 19 gods Vesta, Janus, Asclepius, Orpheus and Perseus.
See motifs of both ...
http://trionfi.com/0/j/d/book-echecs-2/mainold.html

The 16 gods of the Michelino deck have additionally (to the 19 gods) Amor + Daphne + Aeolus + Vesta, but not Saturn, Pan, Vulcan, Pluto, Cybele, Isis/Iris and Thetis.

The 8 Petrarca (usually 6) motifs contain an additional fight between Fortune and Raison (7+8). The row of the winning allegories looks confused, Eternity wins again Time too early. Amor in his fight wins again Iove, Neptun and Pluto (and later in the text he captures Hercules).

Here's the curious Isis or Iris: 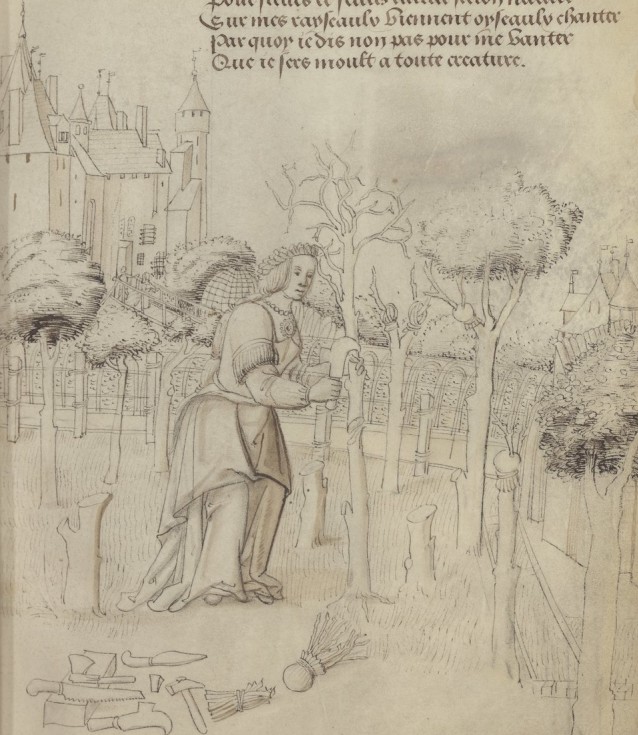 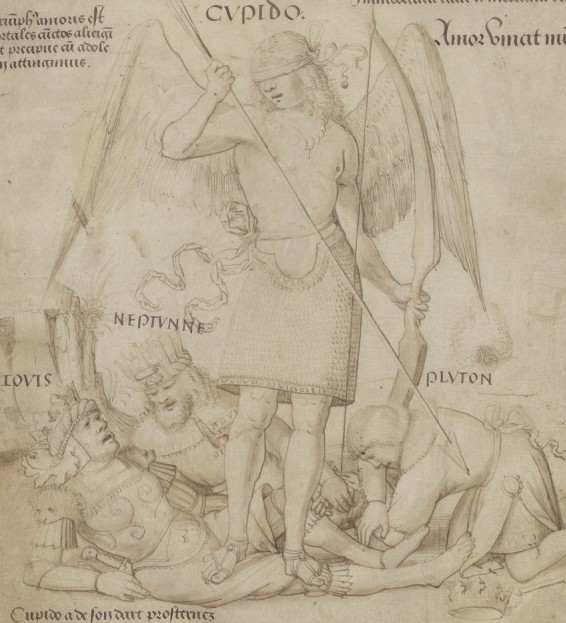 ... and also against Hercules. 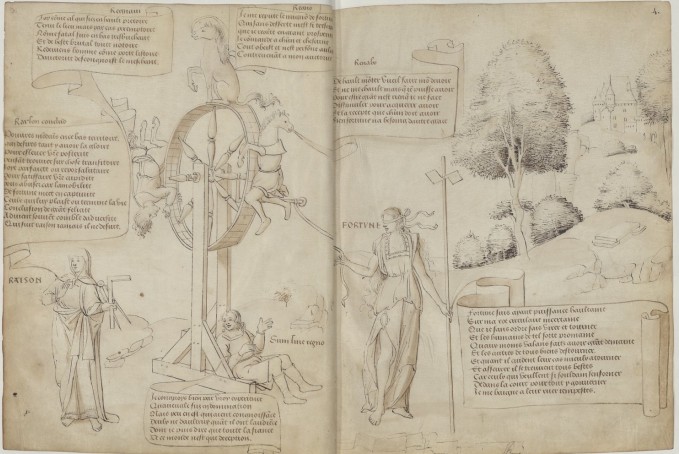 Many colors are bad for clothing, so this are likely the Fool's colors: 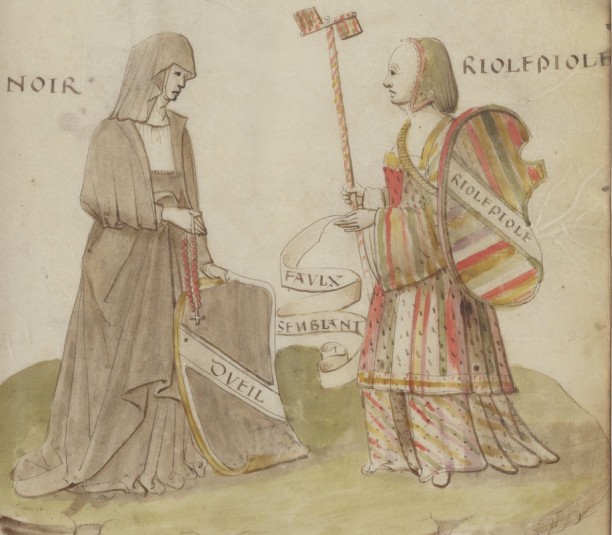 I remember, that there were other French Petrarca: "Trionfi" editions, which also focussed on the fights between the Petrarca allegories, not on the triumphs and on the chariots.
Huck
http://trionfi.com

#125 by Huck
I remember, that recently somewhere (here in the Forum?) Atropos, Lachesis and Clotho stood on a female body (a picture).
Well, I get it from here ... The Triumph of Death, or The 3 Fates

The three fates, Clotho, Lachesis and Atropos, who spin, draw out and cut the thread of Life, represent Death in this tapestry, as they triumph over the fallen body of Chastity. This is the third subject in Petrarch's poem The Triumphs. First, Love triumphs; then Love is overcome by Chastity, Chastity by Death, Death by Fame, Fame by Time and Time by Eternity.

The same motif is used for the Petrarca Trionfi in the above described French manuscript with its 128 themes. 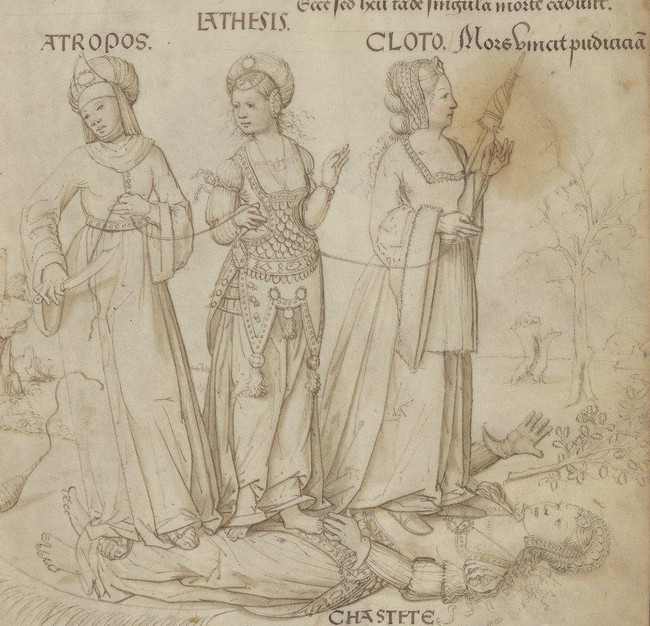 The following picture is then Fame triumphing about the 3 ... 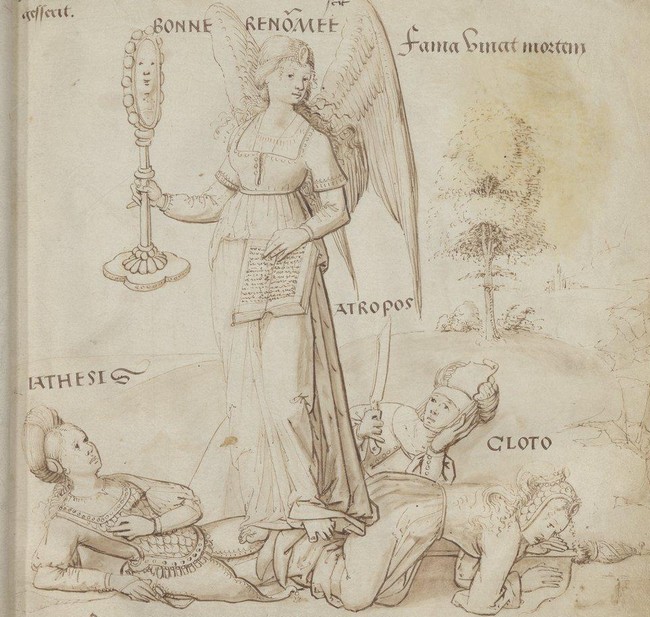 I wonder about the date of the manuscript. Gallica gives very cautiously 1501-1600.
The text shows a "Duchesse of Bar" as the most elegant woman, any other person seems not to be honored. A possible duchess of Bar would be Philippa of Geldern, wife of René d'Anjou II, duke of Lorraine.

http://old.citadelle.org/magazine-16-99 ... rraine.cfm
Picture of 1506 in religious text, René with Philippa and children.

René was grandson to Isabella of Lorraine, who got the Michelino deck from Antonio Iacopo Marcello in 1449, he was born in 1451 and was educated at the fabulous court of Rene I d'Anjou, his grandfather. He fought victorious against Charles the Bold of Burgundy in 1477. He participated in the Ferrarese war 1483 on the side of Venice.
He played "Trionfi" in 1496 ( http://www.letarot.it/page.aspx?id=112 ), this is nearly the first appearance of the outside of Italy.
He is a rather good address for a suspected import of some early Italian Renaissance culture to regions near to France.
Brussels (the suspected location for the production of the Tapestry) isn't too far from Lorraine. The date (1510-1520)
is close enough to have had an influence of the Lorraine court.

Louise of Savoy, mother of King Francois I, was a relative to Philippa from Philippa's mother's side. Around 1497 (as far I remember) the production of one hand painted edition of the Eschecs amoureux for Louise is noted. 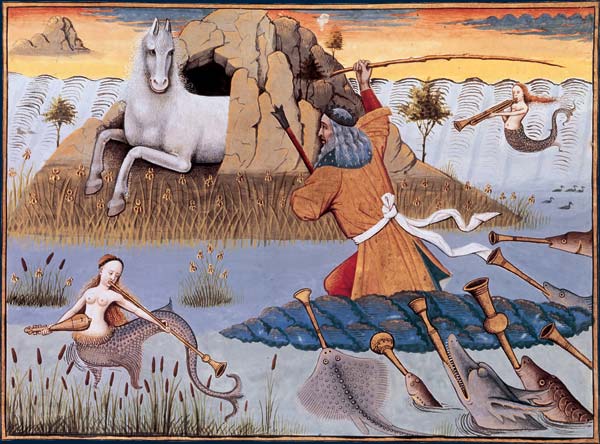 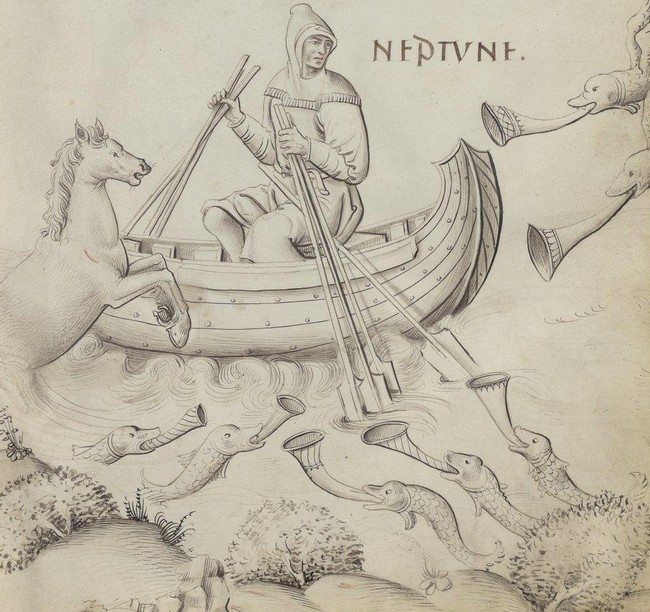 from the discussed text

This is the text of the short poem for "duchesse of Bar" ...

... I'm not an expert for French handwritten text, but I can identify a "Charles roy fracois" at the end.
One roy Charles (VIII) reigned till 1498, another Charles (IX) came to reign since 1560.
Perhaps somebody can help with this text.

Story of the duchy Bar, according wiki ...

In 1354 the Count of Bar took the ducal title and was thereafter recognised as a Peer of France.[1] Père Anselme (died 1694) believed that Count Robert had been created a duchy by King John II of France in preparation for the count's marriage to John's daughter, Mary.[2] The rulers of Bar were not created dukes by imperial appointment. The only title Count Robert received by imperial grant in 1354 was that of Margrave of Pont-à-Mousson.[5] This margraviate was frequently bestowed by the Dukes of Bar on their heirs apparent. In that same year the emperor raised the County of Luxembourg into a duchy and Bar fell between two duchies, Luxembourg and Upper Lorraine.[6] The ducal title was accepted, however, and the imperial tax register of 1532 records the "Duchy on the Meuse" (Herzogtum von der Maß) as a voting member of the Reichstag

In 1430 the last duke of the male line of the ruling house, Louis, died.[6] Bar passed to his great-nephew, René I, who was married to Isabella, Duchess of Lorraine. In 1431 the couple inherited Lorraine. On René's death in 1480, Bar passed to his daughter Yolanda and her son, René II, who was already Duke of Lorraine. In 1482 he conquered the prévôté of Virton, a part of the Duchy of Luxembourg, and annexed it to Bar. In 1484 Peter II, Duke of Bourbon, regent for King Charles VIII of France, formally installed him in the Duchy of Bar.[7] In his final testament published in 1506, René decreed that the two duchies should never be separated.[4] The two duchies remained joined in personal union permanently.

From the wiki to Philippa we get: "The marriage took place in Orléans on 1 September 1485."
From other sources we get, that René was already married, but to a childless women, Jeanne d'Harcourt, since 1471. So we have there a reason, why it took so much time. René refused his wife already in 1475, but it took 10 years till the allowance to divorce and marry again was given, at August 8 in 1485. As if this was not complicated enough, the young Louis of Orleans (who later would became king of France as Louis XII and who also had comparable problems with his wife, btw) had started the "Mad War" ( http://en.wikipedia.org/wiki/Mad_War ). This war was paused by a truce for one year ....


"On 30 August [1485], Louis of Orléans launched a proclamation against the regency. The royal army went to Orléans, but Louis escaped to Beaugency, from where he was dislodged by the young Louis II de La Trémoille in September. On 9 August, Francis II of Brittany also agreed to a truce. The truce was agreed for one year, and is known as the Peace of Bourges, signed on 2 November 1485."

A already stated ... ""The marriage took place in Orléans on 1 September 1485." ... it's not easy to see, how this fits in the interaction. Maybe these curious things have something to do with the short poem.
Huck
http://trionfi.com
SteveM
SteveM

Huck wrote:
Many colors are bad for clothing, so this are likely the Fool's colors:


In french 'piole' may mean 'shack', cubby-hole', but in equine terms 'piole' means variagated, speckled, spotted, dappled - so might relate here to his many, variegated colours, this would make sense in reference to the other woman being labeled Noir - Black - so there seems to be a connection with colour.

SteveM wrote: In french 'piole' may mean 'shack', cubby-hole', but in equine terms 'piole' means variagated, speckled, spotted, dappled - so might relate here to his many, variegated colours, this would make sense in reference to the other woman being labeled Noir - Black - so there seems to be a connection with colour. Riole = debauchery, pleasure party?

Yes, faux-semblant seems correct. I think of the Fool-figure mainly according the baton with wind play, which is also used for the Fool elsewhere ... 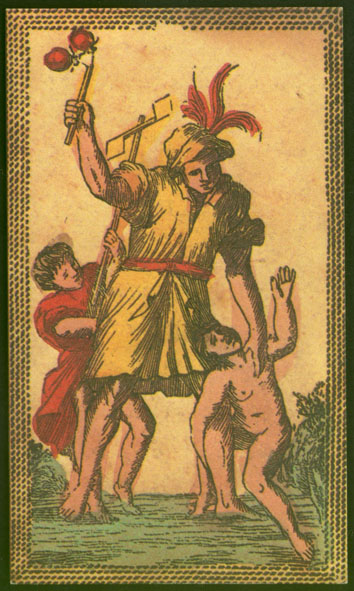 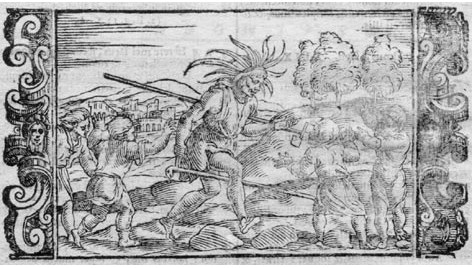 The wind-play is also used for "Fortune" in the discussed text (see above 2 posts before).
Huck
http://trionfi.com
SteveM
SteveM

And finally we have the Primo Causa. Lazarelli described the "four evangelists" on the outside, and for a second time (after Luna) the illuminator complied with his idea. Moreover, the S-series broke with his E-series predecessor and did the same, giving us the same four creatures in the same four corners (from Huck's post). 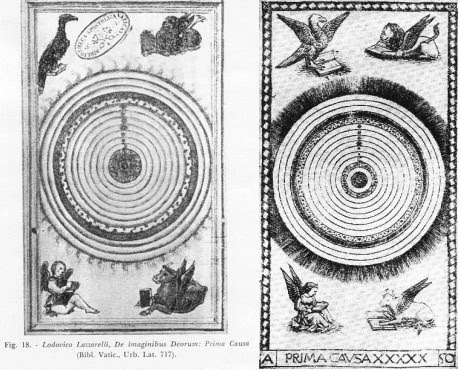 Since the Primo Causa was God, and God was Christ, it was a small jump to add these creatures; it was common practice to put them in the corners of mandorlas was a common practice, -----

But the configuration was almost always different: typically the angel and the eagle were on top, and the lion and the bull on the bottom (sometimes switching sides). It is the same on the earliest tarot World card of this design that I know, the "Sforza Castle," as well as all subsequent ones.

Presumably it was felt that lions and bulls, being heavier than angels and eagles, and less frequently found with wings, should be on the bottom. To my knowledge, only the Lazarelli illumination and the S-series "Mantegna," have eagle and lion on top and the angel and bull on the bottom.

From a 15th century manuscript edition of the Book of the Holy Trinity:
https://bildsuche.digitale-sammlungen.d ... v=100&nav=

This is also repeated in the Rosearium and Pandora series of alchemical texts --
Immature poets imitate; mature poets steal; bad poets deface what they take, and good poets make it into something better, or at least something different.
T. S. Eliot

Fame has in the French picture book the attributes of Prudentia .... book and mirror. We discussed the "missing Prudentia" and its relations to Fame (Fame as hidden Prudentia) very often.
Huck
http://trionfi.com
SteveM
SteveM

"O Count Luther", he cried, "why are you against me?"
To which he replied: "Well, do you not know your chariot is missing its fourth wheel?"

Liuther, Chronicron
Immature poets imitate; mature poets steal; bad poets deface what they take, and good poets make it into something better, or at least something different.
T. S. Eliot