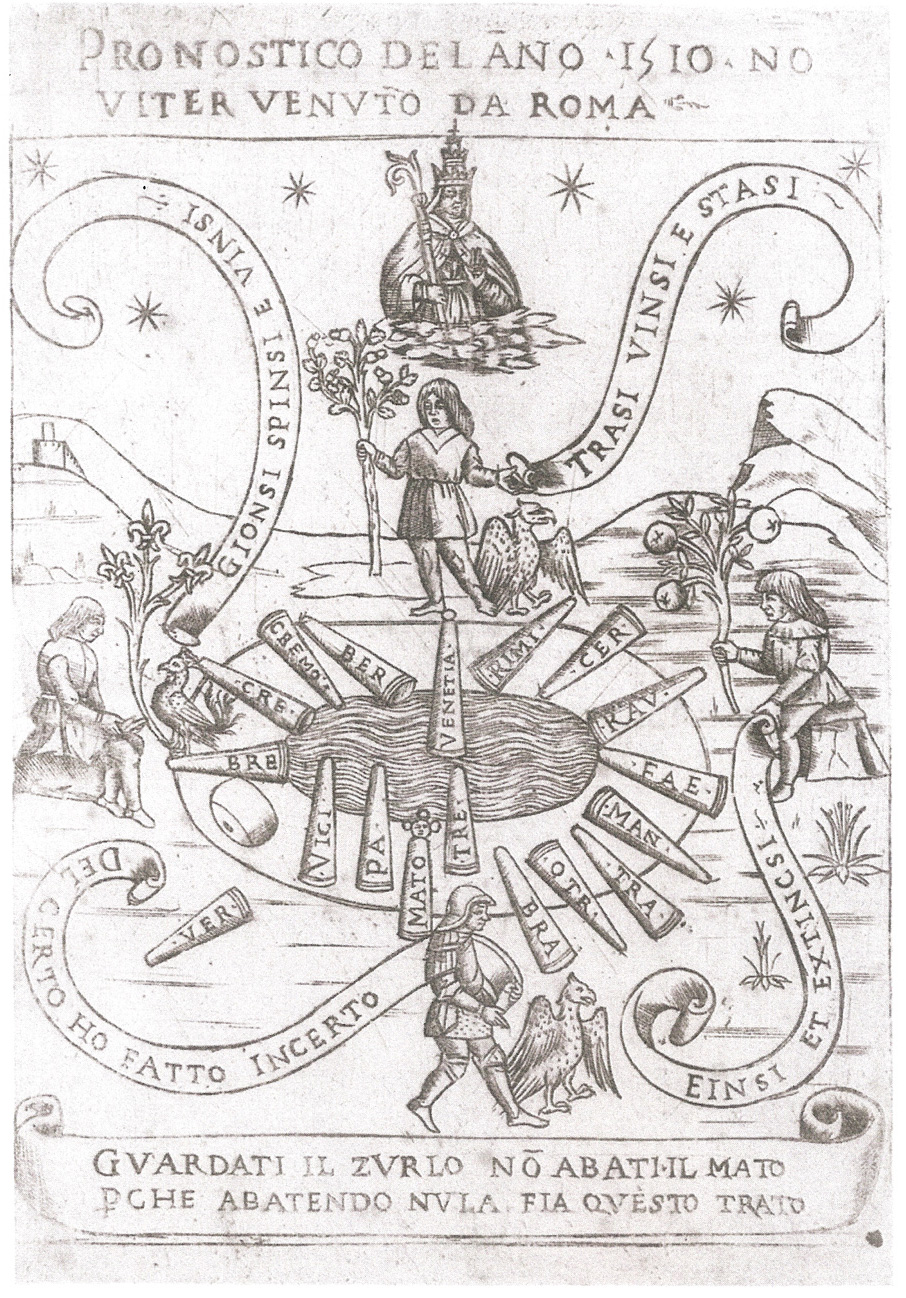 While we wait for OnePotato, we can play with this amazing engraving proposed by Ross

But that is only the beginning, of course.

by marco
Actually, understanding this text is not so easy!
Anyway, I try to translate here, so that other players can make their guesses.

Left banner: "I came, I pushed, I won"
Lower banner: "I made uncertain what was certain"
Right banner: "I ??? (EINSI) and I died (or killed, literally, I extinguished)".
Upper banner: "I passed, I won and I stayed"

Below the image:
"look at the ZURLO, do not strike the fool (MATO), because if you strike him your stroke is null"

According to the Crusca dictionary (http://morpheus.micc.unifi.it:8080/crus ... libera.jsp) Zurlo means "excessive joy, excessive desire"; but I suspect that here it means something else.

PS: a very mysterious and strange image. Thank you Ross

by Ross G. R. Caldwell
For "zurlo" the Zingarelli says "a variant of ciurlo, attested by 1449". They say it means "Ruzzo" (Tuscan).

It seems to refer to the behavior of the "ball" (looks like a cheese roll here), which would roll or totter one way or the other in a capricious fashion.

So maybe "Be careful of the (roll of the) Zurlo, that it doesn't knock down the Matto, because then the turn is null."

Ottavia Niccoli, in "People and Prophecy in Renaissance Italy", without going into the etymology of zurlo, translates it as (p. 26) -

"Take care that the zurlo does not strike down the Mato, because if it does the match is off."

I can see possibilities that would work as a seasonal commentary ... The first guy has a plant which has won over the winter. The second (top ) person has the plant now in bloom , midsummer.. the third person has fruit...it is harvest time and of course then we go to the last person with no plant as it is winter.

http://en.wikipedia.org/wiki/Pope_Julius_II
"The achievements of the League soon outstripped the primary intention of Julius. By one single battle, the Battle of Agnadello on (14 May 1509), the dominion of Venice in Italy was practically lost. But, as neither the King of France nor the Holy Roman Emperor were satisfied with merely effecting the purposes of the Pope, the latter found it necessary to enter into an arrangement with the Venetians to defend himself from those who immediately before had been his allies against them. The Venetians on making humble submission were absolved at the beginning of 1510, and shortly afterwards France was placed under papal interdict."

A scene in the war of the League of Cambrai (1508) against Venezia. The matter went lucky for Venezia, when Pope Julius changed the side in spring 1510 .... so we have at the top the personification of lucky Venezia with the pope in the back, left the French king with peacock and Lille, at the bottom the Emperor with eagle and at the right probably Spanish Ferdinand the Catholic (and the whole referring to wheel of Fortune as association). The shortened words around Venezia are neighbour cities, either papal or Venetian: Pa. for Padova, Rim. for Rimini, Rav. for Ravenna etc.

The Zurlo note possibly refers to playing card rules, which was more than once done in political caricature in this time. "Mato" is in this case near the German Emperor, Zurlo probably refers to the lucky Venetians.

by Huck
The state of the puppets on the round playing ground with the city names seem to indicate, what happened to the cities during the war. Rimini had been taken by the pope in the war, "Rim." is a fallen puppet. The puppet Pa. = Padova is upright. The city was taken during the war, but only for a few weeks ... then it regained the earlier liberty (siege of Padova 1509).

The "Mato" is also a puppet, but special in the outfit. Perhaps the whole refers to a board running game with finally winning in the middle (the "Zurlo"), not a card game.

It's delightful to see you here. Welcome!

by robert
The whole thing reminds me of the Wheel of Fortune with the "I reign, I have reigned" labels.

by Huck
hi Robert,
nice to see you again.

*****
Regarding the game: it's not a running game as earlier suspected, but a sort "Kegeln", a shooting game, the shooting stone is painted on the board.
The upper person is not from Venetia, as before analysed, but should be a representative of the pope who helds a heraldic device of the current pope Julius, the Rovere oak tree. Possibly it's Ferrara, which is also part of the league ... the guy has the oak tree of the pope and the eagle of the emperor, the reigning Este were vasal to pope (Ferrara) and emperor (Modena/Reggio)

The tree for the Spanish participant (right) should be Pomegranates, another heraldic device. So probably the painting was made before Julius changed side (1509), which is also indicated by the "prospects on the year 1510" at the title.

Venetia is still in great danger.
All times are UTC+01:00
Page 1 of 3
Powered by phpBB® Forum Software © phpBB Limited
https://www.phpbb.com/