It seems to refer to the behavior of the "ball" (looks like a cheese roll here), which would roll or totter one way or the other in a capricious fashion.

So maybe "Be careful of the (roll of the) Zurlo, that it doesn't knock down the Matto, because then the turn is null."

Ottavia Niccoli, in "People and Prophecy in Renaissance Italy", without going into the etymology of zurlo, translates it as (p. 26) -

"Take care that the zurlo does not strike down the Mato, because if it does the match is off."

This translation makes perfect sense, so we are looking at the kind of game described by Huck.
Interestingly, the "ball" is not a ball.

This reminds me of the "Game of the sphere" (De Ludo Globi) by Nicolaus Cusanus:
http://books.google.com/books?hl=it&id= ... id&f=false
Also in that case, the game was based on a "ball" with an irregular shape. And also in that case the strange movements of the ball were interpreted as a metaphor of the world.

Such wild movements will certainly require some "fortune" in order to win the game. I think that the image intentionally recalls a wheel of fortune, as proposed by Robert.

The cities that are still standing with Venice could be:
Vicenza, Padova, Treviso.

The trees can indeed refer to the Pope, France and Spain, as suggested by Huck. But what is the meaning of the banners?

I am surprised that Mark J. Zucker, who wrote an article about this image in 1989, didn't notice the Wheel of Fortune structure -
http://www.jstor.org/pss/751551

Instead of comparing the banners to "Regnabo, Regno, Regnavi, Sum Sine Regno", he regards three of them as parodies of Julius Caesar's "Veni, Vidi, Vici". They can be both of course, but the Fortune-motif is clear too.

Zucker - "Each these four poles of European power has a scroll inscribed with a phrase, three of which are parodies of Caesar's laconic remark (as recorded by Plutarch), Veni, vidi, vici.

Thus the scrolls associated with the four principals bear inscriptions that seem to be singularly appropriate to each of them as matters stood at the end of May 1509. By that time Louis had indeed 'arrived, pressed forward, and conquered' (GIONSI SPINSI E VINSI). The papacy, led on the field by Francesco Maria della Rovere, had 'moved (or proceeded), conquered, and remained' (TRASI VINSI E STASI); and Ferdinand had 'dissimulated and extinguished' (EINSI [=FINSI?] ET EXTINCSI) Venetian domination in Apulia. Maximilian, however, had taken no action at all. Instead of acting decisively and bringing the issue to a head, he hesitated, kept Venetian hopes alive, placed the conquest of Venice in jeopardy, and, in short, 'made uncertain what was a sure thing' (DEL CERTO HO FATTO INCERTO)."

#13 by robert
I'm not following it all terribly clearly... but isn't the Pope being figured as Fortune? Rather then being associated with a particular one of the four, the Pope is responsible for the game being played like Fortune spinning her wheel, no?
The Tarot will lose all its vitality for one who allows himself to be side-tracked by its pedantry. - Aleister Crowley

robert wrote:I'm not following it all terribly clearly... but isn't the Pope being figured as Fortune? Rather then being associated with a particular one of the four, the Pope is responsible for the game being played like Fortune spinning her wheel, no?

Interesting thought - Pope as puppet-master in this case. But maybe he is in the "Regno" place on the wheel as well, which is just before a fall.

Zucker explains - "At the top is a boy holding a branch of an oak tree. An eagle accompanies him and he is beneath a half-length figure of a pope in the sky above, incongruously blessing with his left hand (the engraver having failed to take into account the reversal of the image). The Pope can be none other than the reigning pontiff, Julius II, whose family emblem, the oak branch, is held aloft by the young man beneath him. The latter may therefore be identified as Julius' nephew, Francesco Maria della Rovere, Duke of Urbino since 1508 and Captain General of the papal army in 1509-10. Born in 1490, Francesco was only nineteen or twenty at the time when the print was made."

I'm not sure that blessing with the left hand isn't intended to signify something (like bad dealings?). 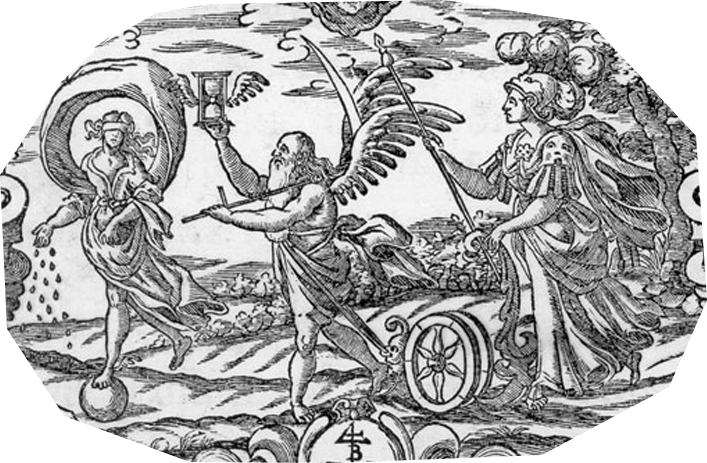 What do you make of this sequence of allegories?

There is a surrounding text which explains it, but I want to see what people make of it based on the images alone. There is nothing missing but the text.

If you know this picture, you are excluded from participating for the moment (sorry Marco!).

#16 by robert
Hmmm. Well, we've Fortune and Time I assume? I'm not sure who the third character is. Some sort of "Victory"? Looks like the "Charioteer" to me. The wheels with the face are very strange.

I'll look forward to hearing what others see and finding out what this is!
The Tarot will lose all its vitality for one who allows himself to be side-tracked by its pedantry. - Aleister Crowley

#17 by marco
Well done Ross! A great image for our game

I think that, observing the image, it is possible to identify more details in addition to those already found by Robert. It would also be great if someone tried to interpret the image as a whole: this one is quite complex! 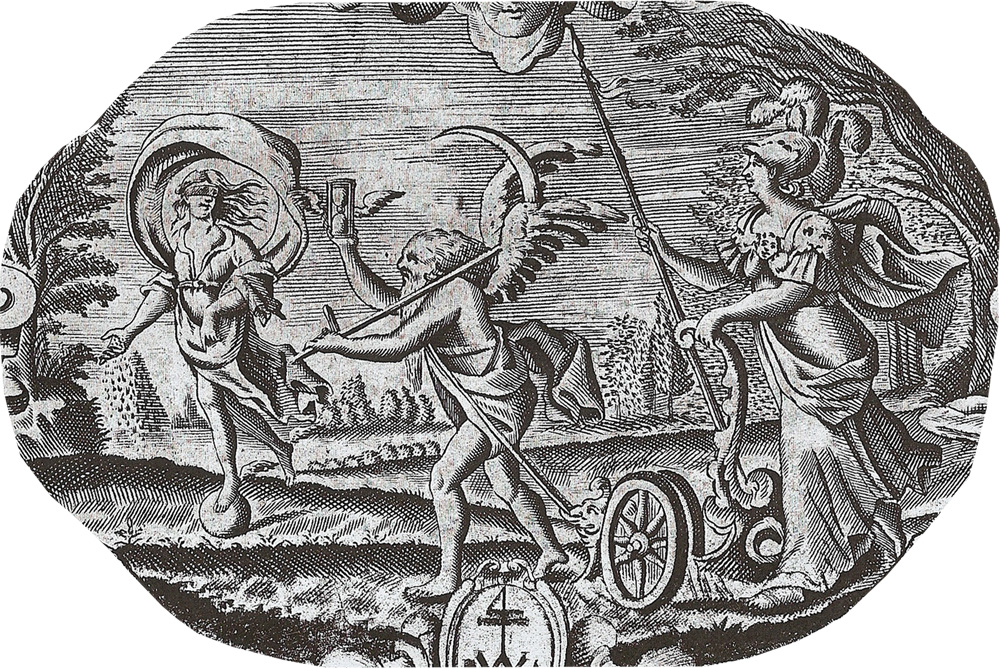 This is a somewhat more refined and detailed version of the same allegory. The allegory decorates the title pages of some books by a certain printer (I don't want to give the name so you can't cheat!)

The bit of face above has nothing to do with the allegory, it's just part of the decorative border I had to cut; the symbol below is just the printer's mark.

robert wrote:Hmmm. Well, we've Fortune and Time I assume? I'm not sure who the third character is. Some sort of "Victory"? Looks like the "Charioteer" to me. The wheels with the face are very strange.

I'll look forward to hearing what others see and finding out what this is!

Your "Victory" figure is actually a personification of "Virtue."

So you have Virtue - Time - Fortune. Conventional allegories, but used in a certain sequence to illustrate a narrative.

Following Marco's advice, look a little more closely and notice certain details. These will help construct a narrative. Use your imagination!