Ovid has it, that Daphne was the daughter of the river Peneus in Thessaly. Others say, that Ladon was the father. So there's a contradiction.

I marked in the genealogical tree that I posted above the position of Daphne with a red circle.
When you look at the original file or the link to that which I gave in the same post it's readable who was involved in her drama (at least due to the author of that marvelous work). Personally I would lean to your (and Ladon's side) of course and like you say in your last post above here the whole pattern is connected to Eurynome who is (like you said) sadly alive today only in Robert von Ranke-Graves recreation of it ...


In the beginning, Eurynome, the Goddess of All Things, rose naked from Chaos, but found nothing substantial for her feet to rest upon, and therefore divided the sea from the sky, dancing lonely upon its waves. She danced towards the south, and the wind set in motion behind her seemed something new and apart with which to begin a work of creation. Wheeling about, she caught hold of this north wind, rubbed it between her hands, and behold! the great serpent Ophion. Eurynome danced to warm herself, wildly and more wildly, until Ophion, grown lustful, coiled about those divine limbs and was moved to couple with her. Now, the North Wind, who is also called Boreas, fertilizes; which is why mares often turn their hind-quarters to the wind and breed foals without aid of a stallion. So Eurynome was likewise got with child.

Next, she assumed the form of a dove, brooding on the waves and, in due process of time, laid the Universal Egg. At her bidding, Ophion coiled seven times about this egg, until it hatched and split in two. out tumbled all things that exist, her children: sun, moon, planets, stars, the earth with its mountains and rivers, its trees, herbs, and living creatures.

Eurynome and Ophion made their home upon Mount Olympus, where he vexed her by claiming to be the author of the Universe. Forthwith she bruised his head with her heel, kicked out his teeth, and banished him to the dark caves below the earth.

Next, the goddess created the seven planetary powers, setting a Titaness and a Titan over each. Theia and Hyperion for the Sun; Phoebe and Atlas for the Moon; Dione and Crius for the planet Mars; Metis and Coeus for the planet Mercury; Themis and Eurynmedon for the planet Jupiter; Tethys and Oceanus for Venus; Rhea and Cronus for the planet Saturn. But the first man was Pelasgus, ancestor of the Pelasgians; he sprang from the soil of Arcadia, followed by certain others, whom he taught to make huts and feed upon acorns and sew pig-skin tunics such as poor folk still wear in Euboea and Phocis.

As I noted elsewhere to my knowledge this is the model for the original Tarot de Marseille WORLD XXI in motion - so I think that you broke some important ground here - wherever this may lead you.

#12 by Huck
Thessaly version of Daphne


The Vale of Tempe (Greek: Τέμπη) is a gorge in the Tempi municipality of northern Thessaly, Greece, located between Olympus to the north and Ossa to the south. The valley is 10 kilometers long and as narrow as 25 meters in places, with cliffs nearly 500 meters high, and through it flows the Pineios River on its way to the Aegean Sea. In ancient times, it was celebrated by Greek poets as a favorite haunt of Apollo and the Muses. On the right bank of the Pineios sat a temple to Apollo, near which the laurels used to crown the victorious in the Pythian Games were gathered.

This seems to be the place, where the Pythian games took their laurels from. This was connected to some festivities. Before happened that:

The people of Epirus were strong man and they had a cultural center, Dodona, a Zeus oracle, which competed with Delphi. They invaded Thessaly , and centuries later they also took influence on lower Greece regions. They could also influence Delphi.


A distinct Thessalian tribal identity and culture first began to form from the 9th century BC on as a mixture of the local population and immigrants from Epirus, first in the region of the Pelasgiotis, with Pherae as its main centre. From there they quickly expanded inland to the plain of the Pineios and towards the Malian Gulf. The Thessalians spoke a distinct form of Aeolic Greek. In the late 7th century BC, the Thessalians conquered the so-called perioikoi. In this process the Thessalians captured Anthela and came to control the local amphictyony. By assuming the former share of the perioikoi in the Delphic Amphictyony, the Thessalians also came to play a leading role in the latter, providing 14 of the 24 hieromnemones and presiding over the Pythian Games. As a result of the First Sacred War (595–585 BC), the Thessalians briefly extended their sway over Phocis as well, but the Boeotians drove them back after the battles of Hyampolis and Ceressus in the mid-6th century. 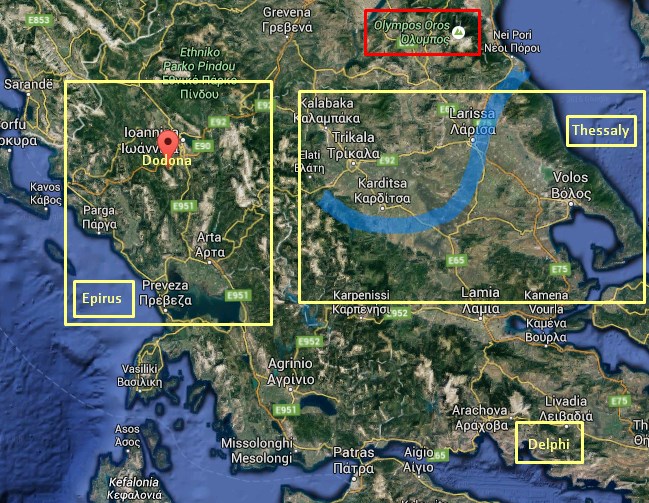 Thelpusa had earlier another name, and it was destroyed in 3rd century. In Pausanias' time it was more or less a lost city. The birds at the Stymphalos were shot, Ladon killed and some other mythical figures also. Perhaps this already tells, that an older past with other mythological ideas were lost, when the Herakles story with the 12 works had found its base: " The establishment of a fixed cycle of twelve labours was attributed by the Greeks to an epic poem, now lost, written by Peisander, dated about 600 BC." says wiki.

I think, Daphne from Ladon is the earlier version, and Daphne from the Peneios of Thessaly is the later update. 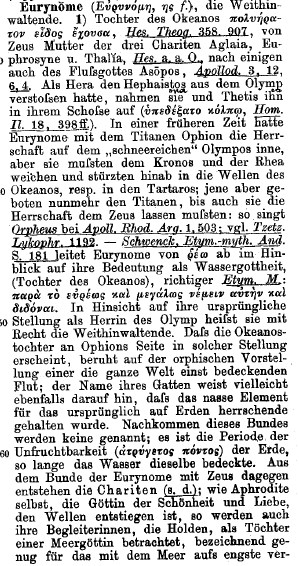 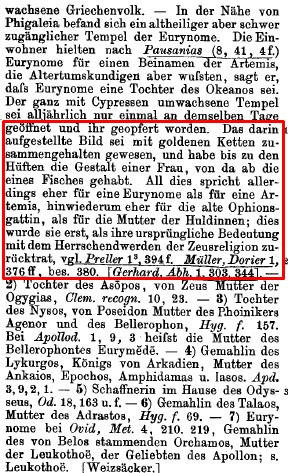 I saw a movie about Delphi ...

... according which at Delphi (right under the temple of Apollo) two crossing geological fault lines were detected, indicating, that there was indeed some natural gas release, which the researchers identified as ethylene gas. 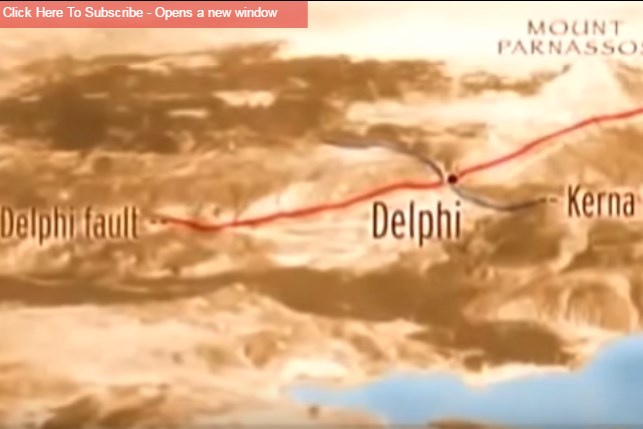 
Hagiography has it that in 362, on behalf of his emperor Julian the Apostate, Oribasius visited the Delphic oracle, now in a rather desolate state, offering his emperor's services to the temple and, in return, receiving one of the last prophecies by the Delphic Pythia.

Tell the emperor that my hall has fallen to the ground. Phoibos no longer has his house, nor his mantic bay, nor his prophetic spring; the water has dried up.

Fontenrose doubts the authenticity of this oracle, characterizing it a "Christian oracle, devised to show that the Delphic Apollo foresaw the mission of Christ and the end of Oracles."

Fontenrose ...
https://books.google.de/books/about/Pyt ... edir_esc=y
... may be right, but what about the other oracle dates after 362 BC (in the wiki article)? Maybe I'm just confused (or it was a sort of video-typo, which escaped the redaction) ....

Geological fault lines have a natural context to the position of springs and resulting rivers, gas in a natural manner associates the existence of dragons at such locations.
The Eurynome text moves the dragon Ophion finally to caves ...


Eurynome and Ophion made their home upon Mount Olympus, where he vexed her by claiming to be the author of the Universe. Forthwith she bruised his head with her heel, kicked out his teeth, and banished him to the dark caves below the earth.

... maybe caves, which release water (as in the case of the spring of Ladon). Python in Delphi might be such a case, Kadmon's dragon in Theben another and perhaps also the dragon in Kolchis and Ladon might belong to the same category.

Reflecting Eurynomy's dance (in the nothing first and then above the water), one might think ("nothing") of the element of AITHER, creating with her wind by movement from the North the viper Ophion (Wind = AIR) and look then at the later rulers of the world, Zeus (FIRE cause of his lightnings, Poseidon as WATER god and Hades as living in the EARTH, the three somehow mirroring the earlier triad Uranos (Fire, cause heaven has sun), Pontus (WATER god) and Gaia (= EARTH), then the whole looks like a 5-elements-theory.


In the beginning, Eurynome, the Goddess of All Things, rose naked from Chaos, but found nothing substantial for her feet to rest upon, and therefore divided the sea from the sky, dancing lonely upon its waves. She danced towards the south, and the wind set in motion behind her seemed something new and apart with which to begin a work of creation. Wheeling about, she caught hold of this north wind, rubbed it between her hands, and behold! the great serpent Ophion.

After Gaia had enough of Uranos, she made some children with Pontus, also 5 ...

Nereus, who created WATER Naiades (50).
Thaumus, who created creatures with wings (wings = AIR), the Harpyes and Iris and Arke.
Eurybia, who married Pallas from the Uranos-grandsons (Pallas = Ladon, as earlier discussed)
Keto + Phorkys, who together produced a lot of monsters: the 3 Gorgonen (viper-heads), the 3 Graien (1 teeth and 1 eye), Echidne (who produced other monsters) and Ladon (the viper Ladon in the garden of the Hesperides)

... possibly another 5-elements-model with a double involvement of the Ladon terminus.
Huck
http://trionfi.com