Bolognese or Florentine trump order, which is earlier?

Andrea Vitali recently wrote about a tarocchi apropriati from 1648, by Bartolomeo Bocchini (Bologna 1604 - Bergamo or Venice 1648/1653), in which Chariot is before the virtues: http://www.letarot.it/page.aspx?id=881. The papi are omitted; instead, where they would be, he put the Matto. That was either on purpose, with a sly aspersion on the papi, or because he thought his story needed to end by his comparing himself with the "Bagattin". Otherwise the order is standard Bolognese, both in order and in the names of the subjects.
Top

Thanks for drawing our attention to Vitali's article! Definitely a very interesting addition to the Bolognese evidence. Vitali says that the original date of the work is unknown—the edition from 1648 is the third printing (the book itself actually says this on the title page: "Terza impressione") and Vitali mentions a second edition from 1646, but the first printed edition is lost, and apparently the work was circulating in manuscript form beforehand as well. But given how close together the second and third editions were, it seems likely the first edition wasn't much earlier than 1645. The manuscript might have been written not too long before that—maybe sometime in the years after 1635, which Vitali gives as the terminus ante quem for the earlier Part 1 of the work. At the latest, it must have been written at least a few years before 1646.

So this is a second Bolognese list of trumps from before that mid-17th century period which Cuppi identified as the time of a significant revival in tarot's popularity among the literate classes. And as it has the Chariot in the same position as Croce's list, it definitely strengthens the case for dating the Pedini manuscript to no earlier than that mid-17th century revival.
Top

And as it has the Chariot in the same position as Croce's list, it definitely strengthens the case for dating the Pedini manuscript to no earlier than that mid-17th century revival.

Where do you see that? Chariot is between Amore and Tempra, the standard position before the virtues. https://archive.org/details/laprimaseco ... up?q=Carro. Croce's was different, Chariot after Fortezza, so after the virtues. posting.php?mode=reply&f=12&t=1899#pr23009

Thanks for pointing out that the piece could have been written as early as a little after 1635, the date of part 1.
Top

And as it has the Chariot in the same position as Croce's list, it definitely strengthens the case for dating the Pedini manuscript to no earlier than that mid-17th century revival.

Where do you see that? Chariot is between Amore and Tempra, the standard position before the virtues. https://archive.org/details/laprimaseco ... up?q=Carro. Croce's was different, Chariot after Fortezza, so after the virtues. posting.php?mode=reply&f=12&t=1899#pr23009

Oops! Yes, of course, you're right. I was getting the change in the order the wrong way around. I've been a little unfocused lately... So this Bocchini poem actually means that the change in the order must have happened by about 1630 or so, and the Pedini manuscript could therefore still theoretically date from around the time of Croce, at the earliest (but could also be from the mid-17th century or later).
Top


According Andrea Vitali and an expert for the history of costums Dr. Elisabetta Gnignera: "The work was painted by an unknown artist around the 30s of the 17th century."

I do not know what by Andrea Huck is referencing, but it seems plausible. If so, that is another reason for locating the "Bolognese order" as being created in the period between 1600 and 1640 or so: the cards were redrawn in the 1630s. That would be a good time to promote a slightly different order of trumps. Perhaps that is when the game of tarocchini was born, and the lack of distinction between titles for the "papi" was introduced (I do not mean the "equal papi" rule, which it seems to me could easily have preceded such a change).
Top

http://www.letarot.it/page.aspx?id=107&lng=ENG
"The work was painted by an unknown artist around the 30s of the 17th century (1). "
"1 - The dating of the painting is by Dr. Elisabetta Gnignera, our scientific consultant and one of the leading international experts in the history of costum."
Huck
http://trionfi.com
Top

Thanks, Huck. You originally had "the work", which I misinterpreted, forgetting the context, as "the deck", when in fact it was the Fibbia painting that the costumes date. So ignore what I said above: it was based on my misinterpretation.
Top

I have one more thing to say about the switch from Croce's order to the standard Bolognese order in the 17th century. Croce, you will recall, for a party game in Bologna imagined an Emperor and Empress among the triumphs. The book was first published in 1602 and had another printing in 1620, suggesting that the same was true then.

That in the Emperor and Empress, as well as two others, a Pope and one other, probably the Popess, sometime in the second or third quarters of the century switched to all "papi" is suggested by a parallel situation in Florence with Minchiate. Here is Depaulis, "Early Italian Lists," 2013, online, p. 45 (and of course we know now that references to Germini in Florence go considerably earlier than 1530): 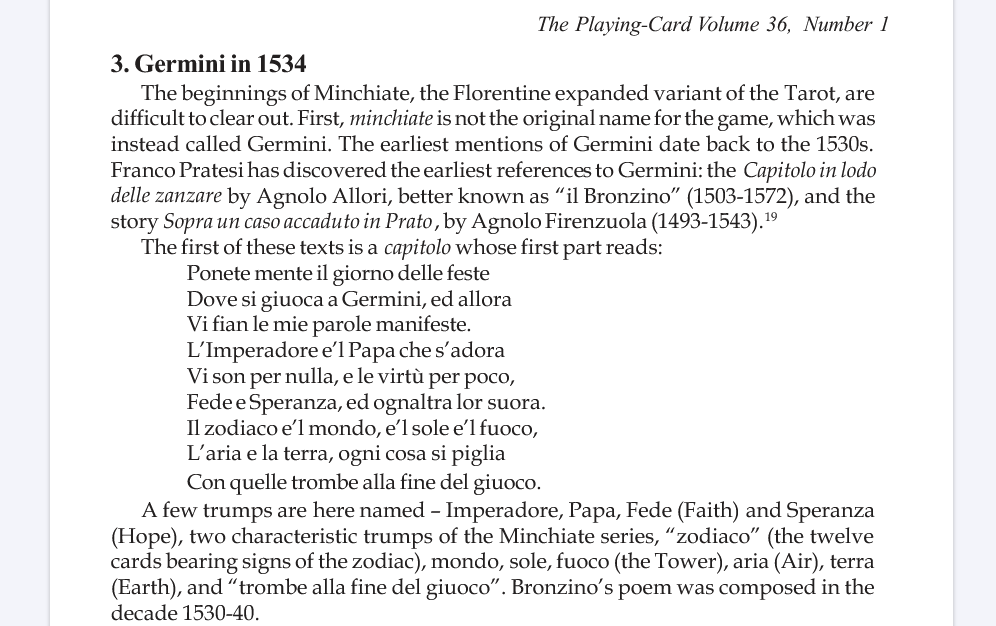 Here we have two of the three Minchiate dignitaries, Pope and Emperor. Nazario Renzoni, who wrotean earlier article on the Bronzini poem (The Playing Card 41, no. 2, Oct.-Dec. 2012), observed that a later edition of the poem included the Empress (pp. 85-86):

It is interesting to know that in a later version of the poem the verse L'Imperadore e 'I Papa che s'adora is replaced by L'Imperatrice, e Valtre, che si onora.

It is perhaps worthy of note that these three cards, which together with the Ganellino and L'Amore were already known in the XVII century by the generic name of papi (popes), at Bronzini's time were still distinguished by their specific names.

Below, Depaulis's columns, from left to right are: Bologna, Minchiate, Rosenwald, Strambotto (Depaulis p. 43). Given what he said earlier about the Bronzini, these columns each apply to a different time: the Bologna is 1602 (Croce's time), the Minchiate is sometime in the 17th century, the Rosenwald is early 16th century, and the strambotto is c. 1500.

In Bologna they played Minchiate as well as tarocchi/tarocchini, as is known from the editions featuring the Bologna skyline on the Trombe card, hardly appropriate for Florence. I suspect that the reason Love is 5 in the Bolognese tarocchini is that it was 5 in Minchiate. It will be less confusing for those who play both games. So it seems reasonable to me that when Minchiate changed, the Bolognese tarocchi would have changed as well, although which would have come first is not yet settled. The difference, aside from the greater number of triumphs in minchiate, of course was that there were four such "papi" in the Bolognese tarocchi vs. three in minchiate. That would ordinarily have made Love number 6; but they got around that problem, when they started numbering the triumphs, by simply having those before Love be unnumbered. The two decks, tarocchini and minchiate, were numerically in sync.

This change of title is a separate issue from the "equal papi" rule. That rule applied or didn't apply regardless of the gender and type of crown the "papi" happened to be thought in terms of, as we know from Piscina and the type of deck that would have been used in Piedmont, with two males and two females. But changing from four names to calling the four all by the same name makes more sense if they all had equal power from the start. So, at least from this perspective, it is more likely that the practice started with the Bolognese 78 card deck, and then spread to Minchiate in Florence, than the reverse, as well as continuing in Bologna with the 62 card deck, whenever it was instituted.
Top

Yes, I forgot. I have no idea how many cards the Bologna deck had when the "equal papi" rule began. Perhaps 70. What I meant was, a deck not yet reduced by removing some of its number cards.

Added next day: and by "added" I don't necessarily mean that the number of triumphs in Ferrara would have increased by two. They might have substituted for two, for example the Pope or Popess and Prudence, thus staying at 70. At some point, to be sure, they would have been additions, along with others, to make 22.
Top
Post Reply
29 posts