mikeh wrote:
For the bizarre, Steve, is there any way you can adjust your picture of the illumination to include the whole thing? Or maybe just the right side, large. ..

If you click on the link it takes you to the complete (larger) picture.

#12 by mikeh
Yes, I was wanting the absurdity to be in our collective face, and I was being lazy.

With the right side cut off, the scene is halfway believable. But did anyone really dress like this? 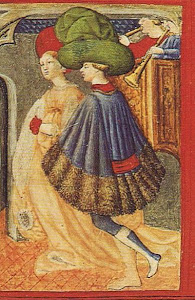 which compares to this:

And notice the similarity to Pisanello drawings (Syson and Thornton, Objects of Virtue: Art in Renaissance Italy, p. 170) 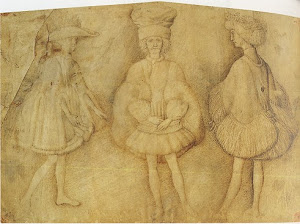 #13 by Lorredan
I have been reading about Renaissance dress, and although it talks about 'exageration' in things like trains for women, and shoes- it really does not talk about exagerated Hats. One thing I did learn was that you could buy your way out of the sumptuary laws. So execessive use of Fur was against the law, but if you paid enough, more fur could be used, as well as permission to wear massive amounts of gold thread.
Maybe this exagerated depiction was to show how rich you were.
As to "But did anyone really dress like this" I am not sure. This century we saw richness in absurdity of silly hats...
Prince Andrew's daughters.....
http://www.washingtonpost.com/blogs/roy ... _blog.html

Vanity and money knows no bounds.
~Lorredan
The Universe is full of magical things patiently waiting for our wits to grow sharper.
Eden Phillpotts
mikeh
mikeh 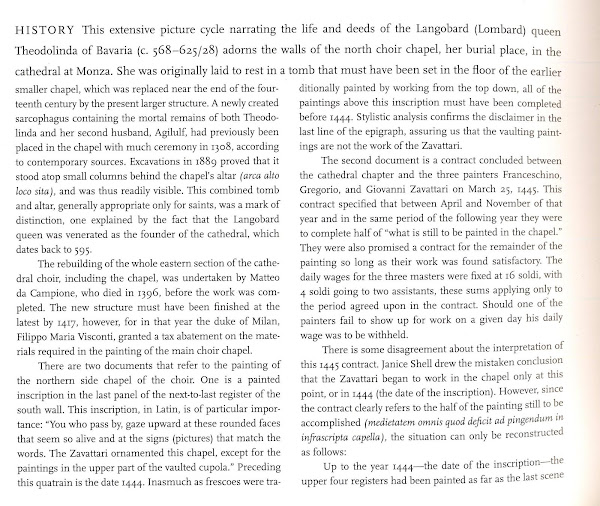 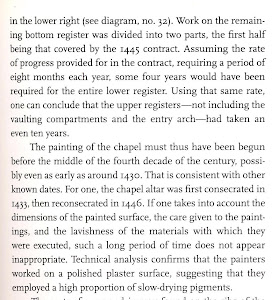 So they started around 1434 or so, ending 1445. To estimate when they did what, you have to know the layout; the upper ones were done first. Of the three pictures that you showed, Lorredan, the top and the bottom are late, on the bottom level. I can't find the middle one, but it looks similar to the ones on the second level. (I couldn't find any at first, from your pictures; then I realized they are mirror images of what is in Roettgen's book.) I can't tell differences in painting style; all I see is that the lower two levels have more detail, with fine gold patterns in the clothes; that makes sense for the ones closer to eye level. At the same time, the clothing on the top level looks to me more flamboyant (as opposed to intricate), but without the fine details. Here is something from the top level (earliest): 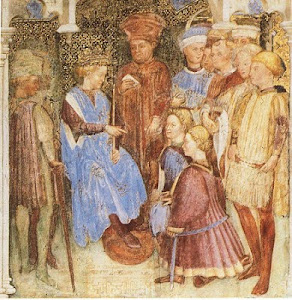 Here is an old post of mine that has a bunch of pictures from Monza, arranged chronologically. Scroll down until you get to the one I just showed: viewtopic.php?f=11&t=365&p=7136&hilit=Pisanello#p7136

mikeh wrote: But did anyone really dress like this?

Condottiere as the pimp-daddies of yesteryear...in battle no less (contemporary with the CY): This one only seems modest in light of the others above: #16 by mikeh
I certainly don't deny that there were depictions of such hats contemporary with the proposed date of the CY (1441-1447), such as the depiction of Farinata in the Villa Carduci, c. 1450, the image you displayed last. But Farinata was of the 13th century; in 1450, that is the distant past. You don't give the context of your other exhibits, but I suspect that they are meant to depict events in the distant past as well; that's what frescoes usually did. If they are meant to depict recent events, what you say would be more believable, but even then I would question whether they actually wore such hats in battle; it would make the commanders rather easy to find for the purpose of killing or capturing. They might have worn such hats, of lesser size perhaps, on special occasions, to make it easier for the people--and viewers of frescoes--to identify them.

Looking in Roettgen's Italian Frescoes: the Early Renaissance, I see several fresco series with such large hats. They all depict historical scenes. Also, such hats are shown as early as 1416, in a Crucifixion by the Salinbeni workshop in Urbino (whose leader, Lorenzo, died before 1420, per Roettgen). I give a detail below, primarily for the intricate designs on the dresses (this is from a Crucifixion, with Roman soldiers). 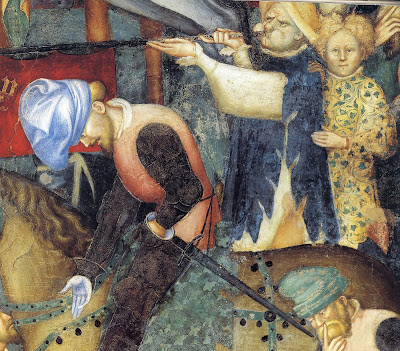 This is right when Bendera said such clothing stems from in Milan--in frescoes, that is. Real life is another matter, although the dresses are credible enough, then as well as later, and hats of more modest dimensions,e.g. in the Tres Riches Heures of du Berry, 1414-1416 (Roettgen p. 43), of a procession. 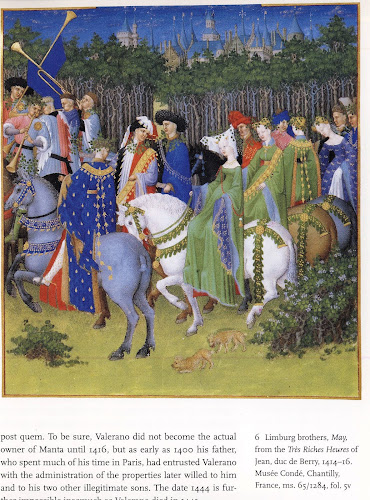 As far as the larger hats and where they were worn, if at all, I'd need to know more about the context of the pictures you present: what it is meant to show, and where it is. Perhaps then we could say whether such attire would have been considered suitable for young Jews on their wedding day in 1438.

However I can't see that anything hangs on this, whatever the truth. The fashion for such depictions started around 1414-1418, not much earlier, because a 1350-1360 Crucifixion in San Gimignano (Roettgen p. 62), similar in composition to the 1416 in Urbino, shows no such hats. 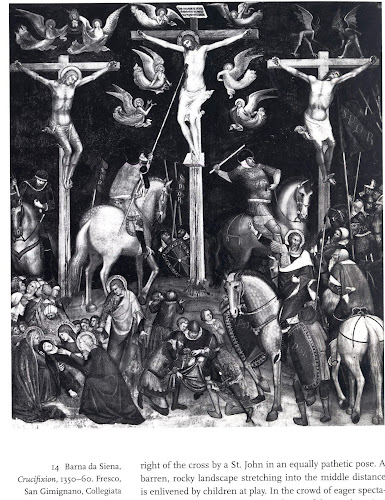 #17 by Phaeded
I thought the Castagno was more obscure than the Uccello ones (Battle of San Romano, 1432 - I'm sure you'll recognize the paintings as a whole) - painted dates in question but c. 1438-1460 for the earliest and last.

#18 by mikeh
Thank you. Yes, I recognized the bucking horse, I think--because it reminded me of Picasso's Guernica. I never noticed the hat or rider. The Farinata I recognize because he's a hero of mine. Now that I know that they didn't wear such hats in the 13th century (from the 1360 fresco I showed, and even Uccello's Sir John Hawkwood), I see that it's a function of something else. I still don't know what.

I would still wonder whether your condotiere wore that hat in the thick of battle. I see that Uccello painted Micheletto Attendola in an almost identical way (the painting on the right, or at http://en.wikipedia.org/wiki/Micheletto_Attendola). That makes me suspicious.

But why not? It's a good image, becoming almost an artist's trademark. Actually, a written account of the guy's battle outfit really would help, if it can be trusted not to embellish the facts.

The c. 1455 "Equestrian Statue" of the same condotiere by Costagna has a somewhat less flamboyant hat, surely meant to be the same one as in the Uccello (or maybe Farinata recycled), in more of a parade stance. That I might believe, as a more realistic presentation of what the guy wore in 1432, at least after the battle.

I read up on the Duc du Berry's Hours. The scenes there definitely were made to correspond to reality. The one I showed was for a small May Day parade, where "wearing of the green" (or whatever that is in French) was encouraged. The June scene corresponds to an event in June of 1410. Etc. These hats, too, are somewhat more modest, more on the order of Abraham Lincoln's "stovepipe" but in bright colors and different shapes.

Well this is one of my favourite images (mainly for the straw hat) Maybe this is Pisanello's trademark- extravagent Hats.
I imagine Saint George never looked like this, but it symbolically says a lot.
~Lorredan
The Universe is full of magical things patiently waiting for our wits to grow sharper.
Eden Phillpotts
mikeh
mikeh

#20 by mikeh
I found the drawing attributed to Ambrogio Bembo. c. 1450, in an accounts book near his name. I'm not sure where to put it, but why not here? 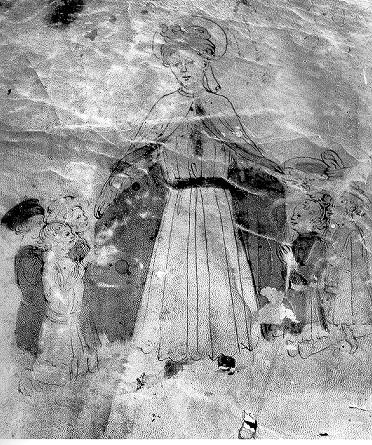