55 of 56 cards are presented here:
http://www.gamesetal.net/Stock_Pages/CNB/cnb3379.htm

English, copperplate engraving, the date is given on the deck with 1775 August 2 . Some motifs are similar to Tarot cards.

Possibly a relative to Minchiate

A report to other conversation cards
http://literature-compass.com/2006/11/2 ... versation/

I remembered, that we had this earlier, though with less data:
viewtopic.php?f=11&t=649
Huck
http://trionfi.com

Huck wrote: A report to other conversation cards
http://literature-compass.com/2006/11/2 ... versation/

Thank you, Huck! This is quite intriguing...

The “Sentimental Conversation Cards” –a deck of 50 cards, marked with pictures of social types (e.g. a Parson, a Lawyer, an Old Bachelor, an Old Maid), with pastoral scenes (e.g. of “Courtship”), and with images from the emblem tradition (e.g. Justice as a pair of scales) –are more enigmatic. No one at the Lilly has figured out how people went about playing with them, and I’d love to know whether anybody reading this has a notion; if the deck originally included rules, this card has long since gone missing. I’m guessing that you would draw a card and then have to rise to the challenge of conversing extemporaneously, and sentimentally (!), on the topic it represented.

#3 by Huck
Thanks Marco.

Detlev Hoffmann/Erika Kroppenstedt in 1972 in "Wahsagekarten" (exhibition catalog) interprets with short comments the 56 cards (which seem to be part of the exhibition). He also speaks of "similar cards", which were shown by Lady Schreiber (1892, p. 98-101).
The cards are accompanied by a text book with the title "Sentimental Conversation Cards", with a "Verweis": "The Method of Fortune Telling by these cards". The book gives two-line verses to each card. Three time one may chose a card. If one likes nothing of it, one have the choice between the three.

Schreiber's cards are in the British Museum now (no pictures):
http://www.britishmuseum.org/research/s ... rentPage=1

So - in spite of the contradiction 50/51 cards (likely Lilly Museum didn't count the start card "Industry")- British Museum and Lilly Museum seem to have cards from the same deck. The motif names are partly similar to the deck of 1775, but not of all cards. And the motifs shown at the blog webpage are not the same.
Interesting, that Liverpool (city know for industry) had "industry" as the start page.

Industry Liverpool c. 1770
Industry in the deck of 1775 (see this thread post 1) has similarity to the Tarot sun card, a spinning woman.

Interestingly two motifs of 55/56 have a horizontal motif (Comedy /Tragedy and World; but World has ironically the name correctly presented in the vertical view). So perhaps one has to assume that Comedy / Tragedy presents the title card, and Word presents the finish card. 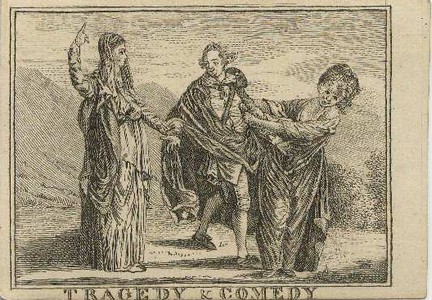 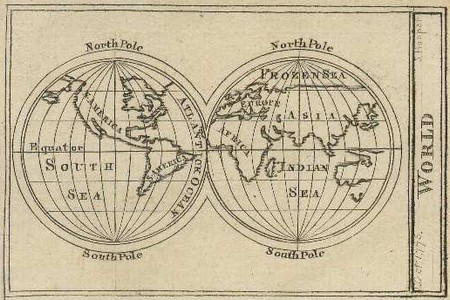 The missing card at the webpage http://www.gamesetal.net/Stock_Pages/CNB/cnb3379.htm is given by the description of Hoffmann: "Shift and make shift". Hoffmann interprets it as life in poverty. A thin (hungry) men hangs a dead cat in the chimney. But "Poverty" is the name of another card, so likely "shift or make shift" has likely another hidden meaning.
Huck
http://trionfi.com

#4 by Huck
A contribution to the the Minchiate Francesi thread ...

... refers to the Conversation Cards 1775 and notes, that both decks use the same "5 of 7 virtues", skipping Temperantia and Fides (which leads to the assumption, that the conservation cards possibly took an influence of the Minchiate Francesi.


Some first analyses of the conversation deck 1775, which caught some new attention recently ...
viewtopic.php?f=11&t=879
... show that this feature repeats: Temperantia and Fides are missing

Probability calculation says, that the repeated feature is not probable, that this happened accidental (probability 1 : 128 = 1 : 2^7).

So either the author of the conversation deck 1775 "likely" either knew the Minchiate Francesi or another tradition, which skipped Temperantia and Fides. 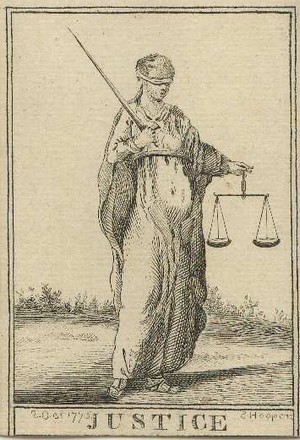 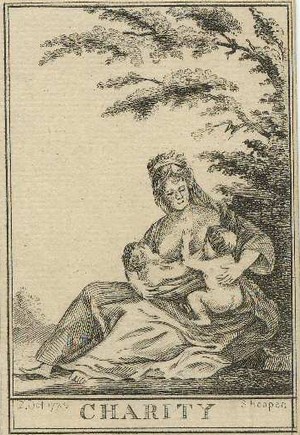 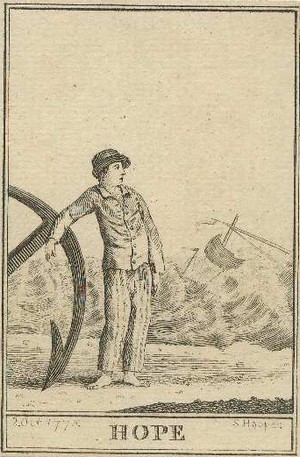 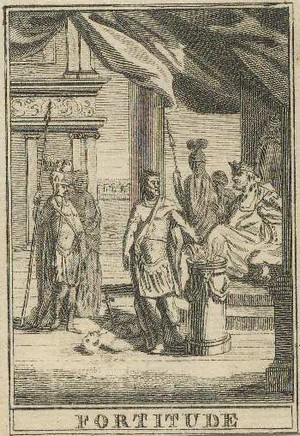 Fortitude shows the scene of the Roman hero Horatius Cocles, who burnt his arm.
http://en.wikipedia.org/wiki/Horatius_Cocles

It might be that the virtues changed their name. Fides might have been transmuted to "Fidelity", Temperance uses two bottles and two bottles appear at another motif: 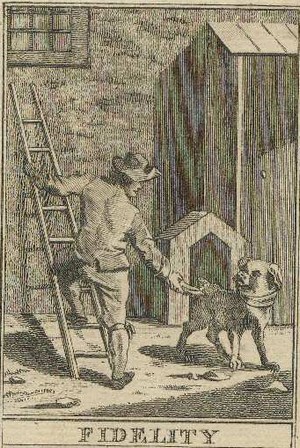 The dog doesn't take the offered sausage from the thief.

Well, this is a possibility, but the interpretation seems to be a little bit hair-drawn. 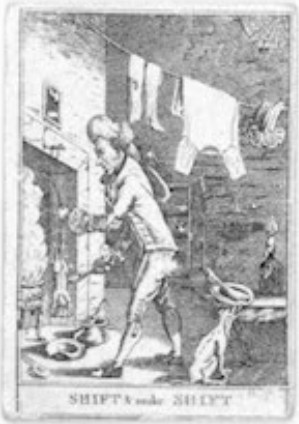 The html-code of the webpage with other 55 cards ...
http://www.gamesetal.net/Stock_Pages/CNB/cnb3379.htm
... has a html-Title (which you don't see at the webpage). There it gives the following information:


1775 HOOPER'S CONVERSATION CARDS - This is known often as Tragedy & Comedy as this is the only card in landscape layout - This set consists of 55/56 cards, engraved. The cards could be used as a game - speaking on a subject on your card and the next person having to follow on with a related story that will include their card - also the style of the cards would be suitable for Fortune Telling - The cards are in excellent condition lightly used but no damage, spots etc - The full set of cards is Tragedy & Comedy, World*, Palace*, Cottage*, Somebody*, Nobody*, Old Maid, Old Batchelor*, Courage*, Heart*, School, Prudence, Parson, Fortitude, Wit , Courtship, Flattery or Deceit, Church, Fidelity, Ruin, Liberality, Law or Security*, Pride, Justice*, Harlequin or Player, Innocence, Gratitude*, Bottle*, Cupid or Love, Poverty*, Friendship, Contemplation*, Folly or Idleness, Economy (Oeconomy* - our version), Charity*, Lady, Physician, Shift & make Shift, Religion, Equipage, Plenty*, Disappointment, Gluttony*, Fop, Fortune*, Death, Hymen or Marriage, Gentleman, Crimes*, Honour, Garden, Industry*, Time, Treachery, Hope*, Punishment* - This deck is missing "Shift &make Shift" - * = cards engraved with "S Hooper 2.oct 1775" on the front --- ref J Berry - "The Waddington Collection" - Carey for the complete list of cards

From this we learn, that researcher John Berry (IPSC) likely was active with this deck. The term "Waddington Collection" leads to this webpage, which gives some info.
http://www.dxpo-playingcards.com/xpo/wa ... wad-03.htm
http://www.wopc.co.uk/waddingtons/