Collection "How Petrarca became famous" (till 1450)

Re: bull and death

#41 by SteveM
There is an old wide spread saying about being trod on by the black feet of the bull/ox (as widespread as Alabania to wales, more common in Germanic languages than the romance) with a variety of meanings (hardship, sorrow, death, misfortune, the death of one's parents). I don't think the origins of the association can be found, all that can be said is that such an association between bulls/ox and death was well established by the end of the 14th century. There is a latin verse which associates both the black feet of the pale horse and the bull/ox with death:

#42 by mikeh
Interesting. This article yoy link to cites much the same sources as White. The problem is, where did the association, which seems to arise in the early 14th century, come from? White did not appear to know the quoted researches of Kozaky, who traces the association to "oriental sources, and in particular to Tibetan masks" -- much the same conclusion as White reached, oddly enough.

Looking at Revelation 6:8, I see no reference to black hooves. The question remains, where did that detail come from? Even my explanation, in terms of an association to the Devil's horns and to the dangerousness of bulls, doesn't account for why the association can only be traced that far, 1323, and no earlier. But that is apparently when Christian missionaries were returning from central Asia.

There is one possibly relevant image from White's article that I didn't post, because it is so late (1438). It is an illustration of the sin of Accidia, Sloth: 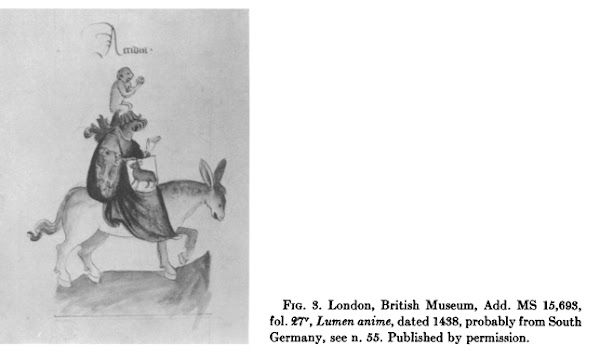 White finds this image of dubious relevance. He says:

In any case, to equate the buffalo with Sloth would not lead to its becoming a symbol of Death: in medieval thinking accidia was simply one of the sins, no more directly connected to Death than any other sin.

Against this, my interpretation of the image is that it depicts someone too lazy and pleasure-seeking to train properly to be a knight. The monkey traditionally symbolized lust The ass is a slow, ungainly animal, hardly suitable for a knight. The bull on the shield ("buffalo" is not relevant yet, I grant him that), I think, is to represent the person's posturing persona as a fierce killer, in hopes that no one will confront him. He is the "bravo" of Italian comic drama of the time (originally Plautus), which developed into the "Captain Fracasse" of the Commedia dell'Arte (and the Belgian tarot), similar also to the Leber Fool card.

#43 by Ross G. R. Caldwell
Couldn't it just be that it is because they are portrayed as solid black animals?

We don't have to look for deep cultural or symbolic reasons reaching back to antiquity, or even some important text, to understand the choice. The pall of the funeral cart was black, and black is the color of death. These animals are black (maybe oxen even pulled the funeral car at the time?).

Looking for deeper symbolism might be too smart by half.

That's the point at issue, Ross. How much of it did they invent? The de' Passi letter suggests that he, at least, did not invent the iconography, and that's 1441. He seems to be following instructions. He is about 20 years old, too. So when and where did it start, and where did it go after that, before 1442 (when we get our first confirmation of the details, except for de' Passi's elephants)? I don't care much what it means, except in relation to those questions; when and where it was, before 1441. It's clearly oxen or bulls, for death, in 1442. And the first known occurrence in Italy is 1415 Florence, death riding a bull. Before that it was in France. That suggests that the image of the oxen, at least, could have been part of Triumphs of Death in Florence before 1442.

I like what Callman, who literally wrote the book on Apollonio (the 1442 artist), says about the iconography of the Triumphs (Apollonio di Giovanni, p. 13):

There is no death of later cycles and the compositions were widely disseminated in prints soon after the middle of the century (Pls. 27, 28). Caradente credited Apollonio with the invention of the composition [Footnote: I trionfi nel primo rinascimento, Turin, 1963, p. 50] , but our information and extant material from these decades is too scarce for us to claim positively more than that he contributed to the development of the composition and to the spread of the new fashion.

The de' Pasti letter pushes the fashion back one year. But it tantalizingly suggests that he himself is not its originator; all he is doing is adding powdered gold paint.


Ross G. R. Caldwell wrote:When you look at the earliest representations of the tradition, in 1442 (Apollonio)
http://commons.wikimedia.org/wiki/File: ... -death.jpg ...

FWIW, I uploaded better quality images of the 1442 Apollonio cycle.

Unfortunately, they are B&W, but they are larger and sharper.

#46 by Lorredan
I finally remembered where I had read about Oxen pulling a Death cart.
It was in the Golden Legend -about Saint James(stories which as read to us at school lunchtime- usually very gross

Lupa heard of this and took the news badly, and when the disciples came to tell her that the king had given his consent, she answered: "Go and take the oxen that I have in a place in the mountains, put together a wagon to carry your master’s body, and build a tomb for him wherever you choose!" This was wolfish thinking, because she knew the oxen were really wild, untamed bulls, and thought they could neither be yoked nor harnessed, and if they were harnessed, would run off in different directions, demolishing the wagon, losing the body, and killing the disciples themselves.

But no wisdom can prevail against God. The disciples, not suspecting the queen’s ruse, went up into the mountain. A fire-breathing dragon came charging upon them, but they met him with the sign of the cross and split him up the middle. They then made the sign of the cross over the bulls, which suddenly became gentle and submitted to the yoke. Next they put Saint James’s body, with the rock upon which they had laid it, on the wagon. The oxen, with no one guiding them, hauled the body into the middle of Lupa’s palace. This was enough for the queen. Recovering from her astonishment, she believed and became a Christian, granted everything the disciples asked for, gave her palace to be a church dedicated to Saint James, endowed it magnificently, and spent the rest of her life doing good works.

~Lorredan
The Universe is full of magical things patiently waiting for our wits to grow sharper.
Eden Phillpotts
mikeh
mikeh

#47 by mikeh
Yes, gross. "And now, children, it's time for your nap," I can hear the nuns saying. But a propos. The Golden Legend was the source of a lot of imagery at that time (e.g. Piero della Francesca and the legend of the true cross). And it was first compiled in 1260, making it late medieval, the right time for the association to appear in art and literature of the 14th century.

#48 by Lorredan
The Death Triumph that MJHurst posted with the bulls is interesting.
They appear to be Aurochs. They are/were the wild cattle with the Horns growing out and forward.
European Bison (also extinct) horns out and upwards, as also Poldolian.
I thought they might have been water buffulo (mozarello cheese) but their horns point backwards.
Funny though, it is thought the Crusades put paid to Aurochs. Only the nobility were supposed to hunt them- so the Nobility did on their way to Jerusalem, as well as destroy their habitat.
A little bit of trivia....Italy or Italis is thought to come from the Oscan word Viteliu meaning 'Land of young cattle'
The last Aurochs were in Poland protected by the King until the 17th Century.
They were considered unpredictable- like Death by the Romans.
~Lorredan
The Universe is full of magical things patiently waiting for our wits to grow sharper.
Eden Phillpotts
mikeh
mikeh

#49 by mikeh
I am not sure which MJ Hurst picture you mean. If you mean the last one of Death, a couple of posts back, I don't see what you mean by "out and forward".

There is a detail in the first known European image of Death riding a bull that supports your find in the Golden Legend: death carries a coffin. White searched in vain for a passage with a coffin in the Christian literature of the time--all he could find was the passage in the Purgatorio, based on II Samuel, about oxen pulling the cart that carried the Ark; White (p. 211) protested that "Death is not God and a coffin is not God's Ark." What he needed was a coffin, and you found something very close, the dead body of St. James, for which a coffin, though not specified, would have been suitable. 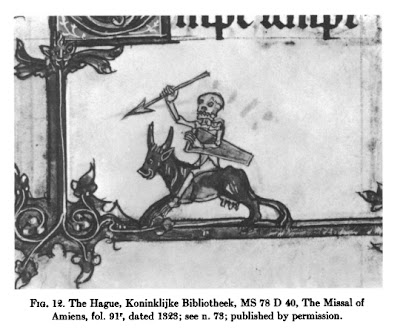 #50 by Lorredan
Hi- First the the black and white appollonia de giovanni cycle above my post is the Triumph of Death. You had posted them before in colour. The two tired looking bulls pulling the Death bier with it's Catholic Bier Cloth are Aurochs.
Your image of Death riding carrying a coffin (incidently that is cow my friend as it has an udder) is a domesticated medieval Poldolian (ancient breed) it's horns stand upwards like the usual depiction of headdress of Highpriestess.
If Death tipped over the Horns so points were facing the nose- you have an Auroch. If points were tipped backward towards the rider you have a European Bison and/or Buffulo. The European Bison has a big hump on his back.
I bet Petrarch would have a giggle if he saw this thread.
Auroch.....

As to Saint James- the legend goes that the angels made a wax see- through coffin over the body on the rock- to preserve him (like sleeping beauty)
A Little fun is a good thing.