1448
Lombardy - Record: Marcello receives 1 standard tarot pack ([ludus] quem triumphum apellant) - as a gift while in the environs of Milan

Tentative - 1440s
Lombardy - Iconography: frescoes of wealthy card-players, traditionally considered tarocchi, in Palazzo Borromeo in Milan, and the Sala dei Svaghi of the castle in Masnago. (although in truth no Triumph cards can be seen (or were even seen in an old photo from before the bombing))

Lombardy - Record: Sforza writing a letter asking for his secretary to buy some packs of triumphs, which he appears to have received two days later

1450-1455
Ferrara – Deck: only an existing Chariot card, Issy-les-Moulineaux, school of Ferrara (other cards from this pack are in the Warsaw museum)

Lombardy - Record: Sigismondo Malatesta writing to the Duchess, Bianca Maria Visconti-Sforza, to commission for him some packs of triumphs

Siena – Record : importation of triumph cards from Florence (reported by Zdekauer, without transcription of original (hence the description “unconfirmed”))

Lombardy - Deck: plausible date for the Visconti-Sforza pack (Dummett has recently argued for a date in the early 1460s)

1457
Ferrara – Record of payments for packs of triumphs

Padua - Record: approximate time of Valerio Marcello having played triumphs with his father’s friends in Monselice (he lived from 1452-1461, so I place it towards the end of his short life)

1466
Florence - Record: Minchiate being mentioned, presumably a card game (but there is no way to determine, and no consensus, that this is the same as the card pack and game that would be later known as Minchiate and Germini)

1468
Lombardy - Record: Galeazzo Maria Sforza commissioning Bonifacio Bembo to paint a cycle of frescoes in the castle in Pavia, including one of “Ladies Bona and Isabeta (…) and her maids playing triumphs in the garden” (the explicit mention of “triumphs” gives weight to the impression that other contemporary “games frescoes” in Borromeo, Masnago and perhaps the Roccabianca card-scene are also intended to represent the playing of triumphs, although no tarot trumps can be seen in them).

Florence - Record: Minchiate appears in a list of permitted games (but I cannot determine if trionfi is also listed, which might indicate that Minchiate was a distinct pack as well as game)

The above list of early tarot evidence based on the list originally assembled by Ross here:
http://ludustriumphorum.blogspot.co.uk/ ... ntion.html

With the new notes on Florence from here:
viewtopic.php?f=11&t=815&start=

And recommendations from additional posts below...
The Tarot will lose all its vitality for one who allows himself to be side-tracked by its pedantry. - Aleister Crowley

#2 by Lorredan
Many thanks- that is clear and I understand the timeline now.
~Lorredan
The Universe is full of magical things patiently waiting for our wits to grow sharper.
Eden Phillpotts

Here you overlook a greater group:

Bartolomeo di Pagholo Seragli is the art trader.
Filippo di Marcho and Pipo are the same persons, the painter
Giovanni di Domenicho is possibly the painter of the decks 1449-1453 in the Silver trader list ... his role in this document is not clear to me.

You overlook also the recent articles:

http;//trionfi.com/es16
You miss three entries in the earlier Silk-dealer article, one you got (1445)
Huck
http://trionfi.com

In c. 2003 the perspective of Tarot origin research could be described with the following graphic:

Black and red points stood for documents, which contained the word "Trionfi" or similar in relation to playing card notes. Black stood for "document from Ferrara" and red stood for "document from elsewhere".
The numbers indicated the years 1442-1465. The whole had been mainly based on the text "The Prince and the Playing Cards" (1996) published by Gerardo Ortalli based to great parts on the researches of Adriano Franceschini, which had been then a great improvement against the earlier works of Dummett and Stuart Kaplan, which had been of great value for the increasing English discussion of Tarot History.

A recent attempt to produce a similar graphic for the research state of 2013 gives a new picture. I've to excuse, that it might contain still errors and also it contains some critical documents, which are interpreted by some as Trionfi documents, but not by others. And the counting system against the presentation attempt of 2003 has changed a little bit.

Beside these weak points there is naturally the good side effect, that one gets a global impression, how much has happened in the meantime. 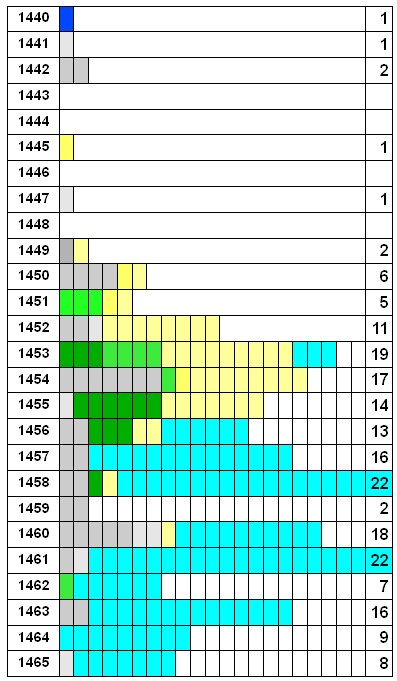 Considered are the years 1440-1465. The final number of each row gives the number of documents to the connected years.
The table uses colors and the colors have meaning. The meaning is explained by this table:

The colors lead to specific developments in the researcher time, and indicate the articles, by which the entries became known in the Tarot History researcher world.

For "dark grey" and "before 2003" we've mostly the already mentioned "The Prince and the Playing Cards. For light grey we've the time, when Trionfi.com had started and organized a collection of the documents. The improvements of the lists were rare events till Franco Pratesi started to become again engaged in Playing Card History. This happened in November 2011 in context of the detection of a new Arnold Esch report in 2007, who had noted some Trionfi card documents in a custom register in Rome.
Franco made then his own researches in Florence and detected all the documents, which are indicated in green and yellow.

This had been really a great time. The number of documents had been increased by c. 200 % then. The attention in research, mostly used to focus on Milan, Ferrara and Bologna, had turned then to Florence.

Dark blue: Additionally to Franco Pratesi's successes Thierry Depaulis had detected a Trionfi card note in a work of Nerida Newbigin about the diaries of Giusto Giusti. This was from September 1440, the deck was from Florence and the note that the new "oldest appearance" of the word Trionfi in playing card context. Franco wrote a report:
http://trionfi.com/giusto-giusti

Light blue: Prof. Dr. Arnold Esch, not a playing card researcher, but for some time responsible for a custom register in Rome, had observed, how much excitement his few remarks about playing card imports to Rome had caused on our web page. So his plan was born to take a second view especially for items of our interest. The result became a 13-pages article, written together with Doris Esch, which was published in the Gutenberg Jahrbuch 2013. With this the number of known Trionfi documents was more than doubled again.
A webpage in preparation:
http://trionfi.com/arnold-esch-playing-card-reports

... for the moment it's not much there, but it likely will develop soon. Esch's impact on our presentation of the early Trionfi card document can be seen here: