The following seems to have happened at a Piedmont battlefield in the year 1625:
See the report about the armies there:
http://rohanturenne.blogspot.de/2011/04 ... -1625.html
The time seems to be September 1625. See in the report:

(September and Mareschal Crequy appear in the larger text).
http://en.wikipedia.org/wiki/Cr%C3%A9quy_family

Charles I de Blanchefort, son-in-law of the connetable of Lesdiguieres (last connetable of France),[12] prince de Poix, seigneur de Créquy, de Fressin et de Canaples, marquis de Vizille et de Treffort, comte de Sault, baron de Vienne-le-Chastel et de La Tour d'Aigues, duc de Lesdiguieres (1578-1638), marshal of France, and peer of France, son of the last-named, saw his first fighting before Laon in 1594, and was wounded at the capture of Saint-Jean-d'Angély in 1621. In the next year he became a marshal of France. He served through the Piedmontese campaign in aid of Savoy in 1624 as second in command to the constable, François de Bonne, duc de Lesdiguires, whose daughter Madeleine he had married in 1595. He inherited in 1626 the estates and title of his father-in-law, who had induced him, after the death of his first wife, to marry her half-sister Françoise. He was also lieutenant-general of Dauphiné. In 1633 he was ambassador to Rome, and in 1636 to Venice. He fought in the Italian campaigns of 1630, 1635, 1636 and 1637, when he helped to defeat the Spaniards at Monte Baldo. He was killed on 17 March 1638 in an attempt to raise the siege of Crema, a fortress in the Milanese. He had a quarrel extending over years with Philip, the bastard of Savoy, which ended in a duel fatal to Philip in 1599; and in 1620 he defended Saint-Aignan, who was his prisoner of war, against a prosecution threatened by Louis XIII. Some of his letters are preserved in the Bibliothque Nationale in Paris, and his life was written by N. Chorier (Grenoble, 1683).

The different armies have a playing card dialog. One of the used cards is a "Taraut" card with swords. 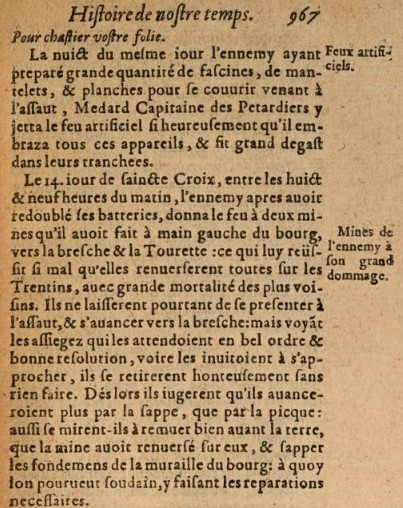 In the final end there's a case of greater mortality. The connected larger war proceeded for further 23 years.
Huck
http://trionfi.com