1. A letter written by Francesco Gonzaga (1366-1407), ruler in Mantova, in Gozzolo at 29 October 1388 to Galeazzo de Buzoni.
The document was in part already published in 1921 by Pia Gorilla in "Pittori e miniatori a Mantova ... " in "Atti e memorie della R. Accademia Virgiliana, XI-XIII, 1918-20 (1921), pp. 185-187.
As a note of the authors this document is noted after 3 bans (Florence 1377, Siena 1377, Sicily 1377-1391) and chronicles (Viterbo) as the 5th oldest Italian document. Also it's the first document, which shows playing card interests of Italian nobility. The action is rather near in time to the wedding of Valentina Visconti, from which it is assumed, that Valentia brought a Lombard playing card deck to France. So perhaps this was a time of special interest or playing cards.

3. A pen drawing at a leather cover of an account book from 1425-27, which shows a figure seated on a throne, with some similarity to a "Queen of Baton" 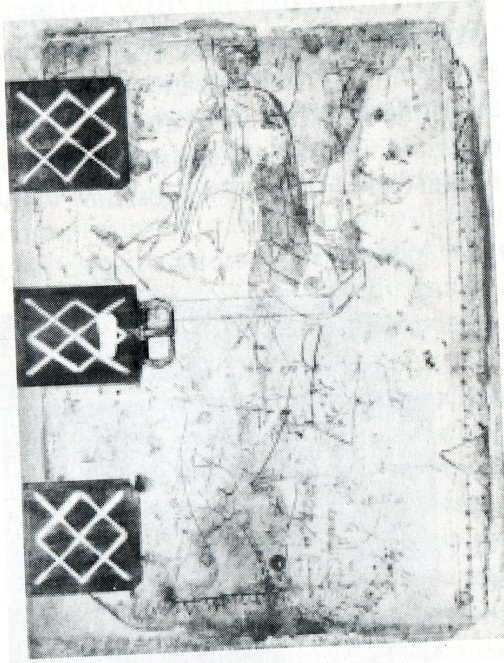 Additionaly added from my side to the theme Gonzaga:

6. A further Trionfi card note (1484) in connection to the region of Sabbioneta (near Montova), referenced by Andre Vitali

9. Involvement of the Gonzaga in the Teofilo Folengo production "Triperuno" (with Tarocchi scene)
viewtopic.php?f=11&t=759

13 ... there was also somethng in c. 1437 with teaching cards in the school of Vittorino da Feltre. Andrea Vitali reported this.
Huck
http://trionfi.com

Francesco Gonzaga (1366-1407)
http://en.wikipedia.org/wiki/Francesco_I_Gonzaga
... is the young man, who ordered the production of a worthwhile deck in 1388 in Mantova, then 22 years old and married to a daughter of Bernarbo Visconti. It's the same man, who in 1407 after his death had two playing card decks in his inventory.
The woman (Isabetta Gonzaga Malatesta (1463? - 1432)), also mentioned in the above article, who had after her death in 1432 three playing card decks in her inventory, had been ...

... Elisabetta Gonzaga Malatesta, a cousin to Francesco I, but also she is mother-in-law to the son of Francesco I. And she was wife to Carlo Malatesta (the one, who had been prisoner to Filippo Maria Visconti in 1424 ... a time, in which was possibly the Michelino deck produced).

The date of the playing card document 1388 is rather near to 1389, the year of Valentina Visconti's marriage to Louis d'Orleans and Valentina is said to have had brought a worthwhile playing card deck to France. Indeed Francesco Gonzaga accompanied the bride journey and the festivities in France. Also not far is the year 1391, and then happened a scandal at the court of Mantova. 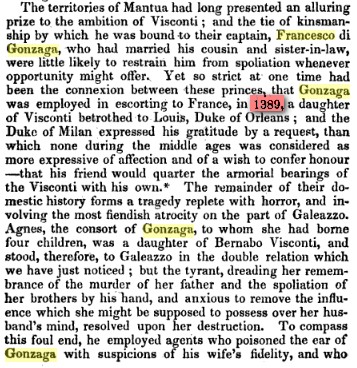 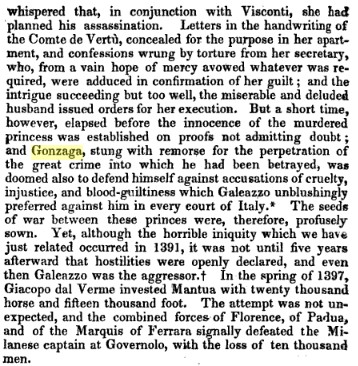 Agnese Visconti, the wife of Francesco Gonzaga, was tricked by Giangaleazzo in the manner, that her husband thought, that she had committed adultery. As a consequence he thought, he had to kill his wife. This happened 1391.
http://en.wikipedia.org/wiki/Agnese_Visconti
Things were similar, as they were later with Beatrice di Tenda and Filippo Maria Visconti (1418) and with Parisina and Niccolo d'Este and son Ugo (1425).
As in the case of Parisina playing cards in some distance were involved.

Huck wrote:
A pen drawing at a leather cover of an account book from 1425-27, which shows a figure seated on a throne, with some similarity to a "Queen of Baton"

More likely to have been a virtue or Fama although there are no distinguishable attributes on that poorly preserved (or reproduced) leather cover. A contemporary drawing by Lorenzo Monaco, ca. 1420: 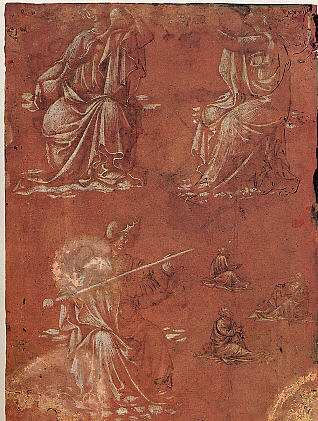 The NY Met's description:
"Although historically given to the preeminent early fifteenth century Florentine painter Lorenzo Monaco, and considered part of Giorgio Vasari's celebrated Libro de' disegni, this rare metalpoint drawing has recently been ascribed to an unknown artist in Lorenzo's circle. Vasari's writings on Lorenzo Monaco describe a chiaroscuro drawing of theological Virtues made "with such fine design in so beautiful and graceful a style that it may well be better than the drawings of any other master of those times." This is indeed a chiaroscuro drawing depicting three Virtues, and the Roman numerals written at the upper right (in the same ink used to retrace the drapery) suggest that perhaps as early as the sixteenth century this was one of a series of sheets, or a page in a collector's album. Yet the evidence is insufficient to give the drawing to Lorenzo Monaco. The identification of the three Virtues as Temperance, Hope, and Fortitude (or Justice) has greater resonance, given the attributes and gestures of the seated women. There is no consensus on the identification of the seated old man, shown in three poses."

I would propose that the seated man was probably an examplar of a Virtue such as we find in the later work of Pesellino or Pollaiuollo. It is also noteworthy that Vasari knew of theological virtues but this surviving drawing is of the civic virtues, thus Monaco's workshop was probably turning out an influential series of the entire seven virtues before 1440 (and that the virtuoso chiaroscuro drew attention to these drawings, even down to Vasari's time).

#4 by Huck
The biography of Charles I Gonzaga of Nevers has the following entry:
https://en.wikipedia.org/wiki/Charles_G ... Montferrat


In 1600, as duke of Rethel, he founded, in Nevers, the Order of the Yellow Ribbon, soon forbidden by the King, due to its peculiar character.

I attempted to get this detail cleared:

The report (about 4 pages) is said to have been given by Clairambaut, possibly this man ...
https://fr.wikipedia.org/wiki/Nicolas-P ... airambault

The young Carlo Gonzaga (duke of Nevers, * 1680, son Louis Gonzaga) had rather radical ideas ... either in 1600 or around 1604/05 (there are contradictions in the information). A sort of communist knight order, possibly also with ideas of free love. Henry forbade the organization 1605/06. Involved in the scandal is a game ... but not Tarot.
La Mora alias ..
https://en.wikipedia.org/wiki/Morra_(game)
https://de.wikipedia.org/wiki/Morra_(Spiel)
... popular especially in Italy.
Huck
http://trionfi.com