Just wondering about the cardstock of Andre Dimanches' Paris deck. Do you think they would stand up to handling/using? They look desirable......!

#32 by Jim Schulman
They appear to be simple playing card stock, paper coated with plastic. They feel indistinguishable in thickness or texture to the Flornoy cards or the Heron Conver facsimile. They are not as sturdy as the thin (full?) plastic Scarabeo cards.

My guess is they'd get ragged if you repeatedly riffle-shuffle them; but that they can be damp wiped. I try not to flex cards like this if I want them to keep; but I have no real expertise in using cards like this gently.

#33 by Bernice
Thank you for such a quick response Jim. I stopped buying decks last year, but the Paris deck still has that 'come-and-buy' lure for me ...... the mystique of those images

#34 by robert
Bea, if you don't have a Paris, you really should get a copy, it's one of a small handful of decks that I'd really recommend.
The Tarot will lose all its vitality for one who allows himself to be side-tracked by its pedantry. - Aleister Crowley

Bernice wrote: ... the mystique of those images

I'm not much of a reader, but I like to lay out the cards and tell stories. These cards are telling stories of politics and vanity; at least, that's how the expressive figures and dense symbols, which seem more like rolexes than rosaries, speak to me. If that appeals to you ...

The name of Jean Volay is connected to Auvergne and the city of Thiers. Later a Delotz family used this production name.
http://books.google.de/books?id=Y46lc2K ... ts&f=false 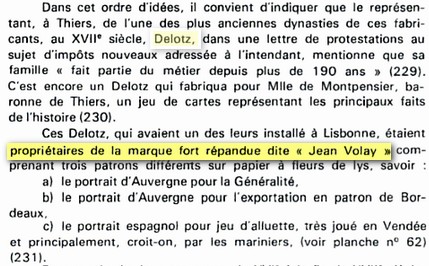 There's mentioned a date of 1582, when Tarots were produced there.

... according which Jack Volay already had been already active in the time of 1575 . For the game of Reversi, which according ...
http://en.wikipedia.org/wiki/Reversis
... ("The game of Reversis was first mentioned in France in 1601, under the name Reversin, played with a 52-card pack.") Leber's note is of interest, cause he knows Reversi already for the time of Francois I. Well, I've no idea, how Leber recognized, that these were Reversi cards.

I'm a little bit puzzled, how it comes, that I find just at this same place (directly above the note of the Reversi deck) in Leber's catalog I, p. 241, a note about 24 Vigil Solis cards, which in their description seem to have been those, which are now part of the Catelin Geofroy cards from Lyon and 1557.

This might say, that the Vigil Solis cards possibly weren't part of the Geofroy finding, but just added cause of similarity. But something is wrong with my consideration. Kaplan presents 38 Geofroy cards (in Kaplan I+II), from which 13 are trumps, which leaves 25 for the pips and courts and knows no monkeys, Leber has 24 cards and Leber knows monkeys, and Kaplan suspects only, that there were monkeys. So the both fragments were not identical, but possibly from the same deck, which once had been parted?

Back to the Tarot de Paris and the Jean Volay deck in London ...

The batons are "Spanish" in both (not astonishing, if we assume as production location in Thiers) 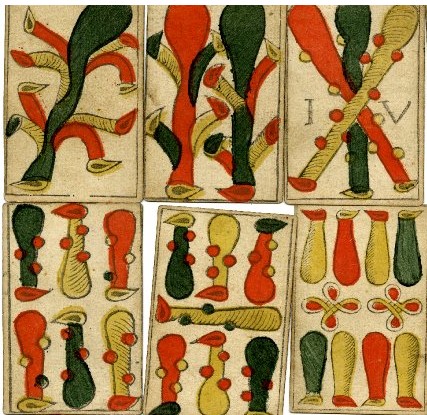 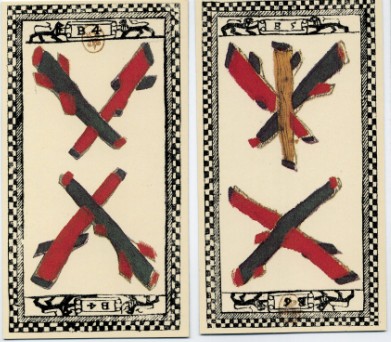 Swords: both are short, but the Tarot de Paris swords are curved in the manner of a machete 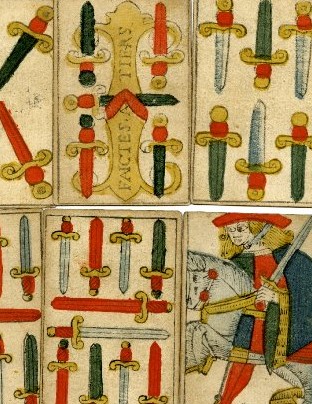 The cups in the Tarot de Paris are very individual 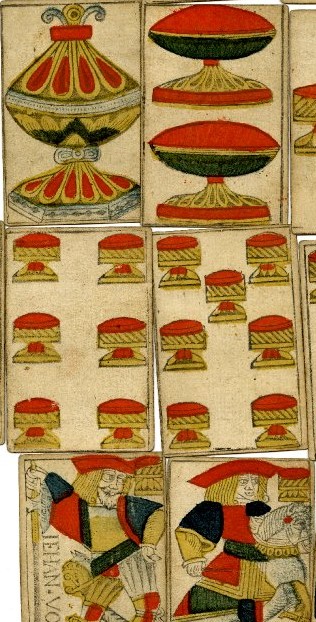 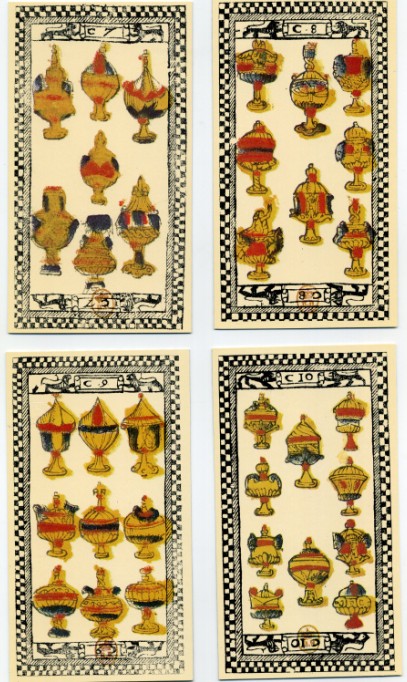 And the coins ... there's some similarity 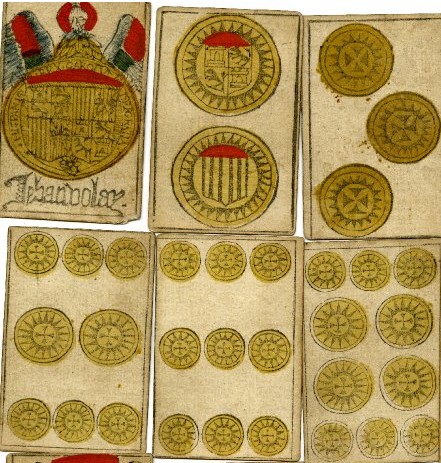 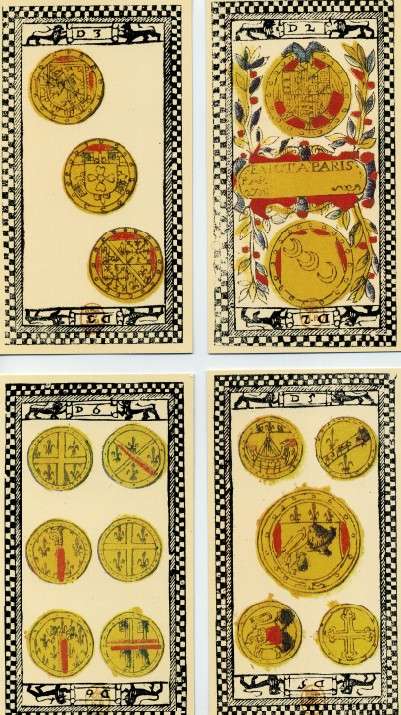 Well, I don't know and don't feel competent, if the similarity is a general one (to the style of the time) or specific to the Tarot de Paris. I don't know enough about the decks of the time.

During this research I stumbled about an interesting page with many card pictures for the Aluette game
http://www.aluette.net/

It's worth a visit.
Huck
http://trionfi.com 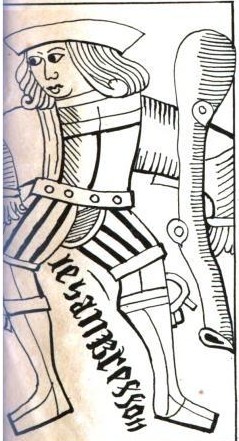 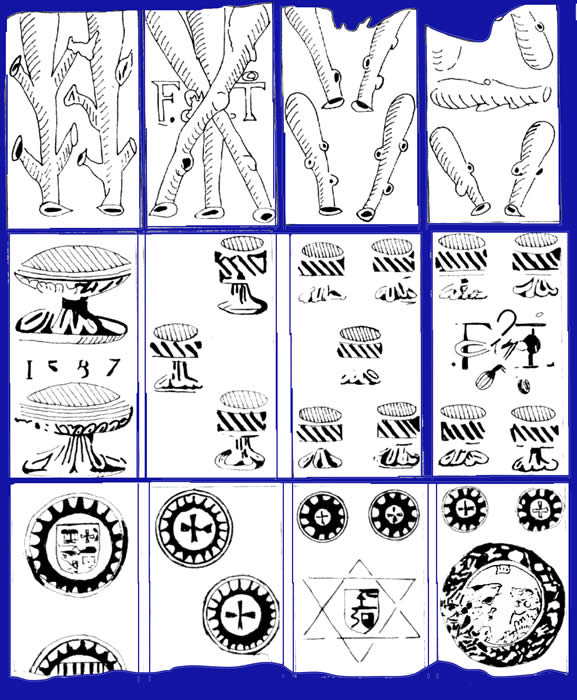 
The Ace of Coin in the Bresson deck again has this similarities tothe Tarot de Paris.
Huck
http://trionfi.com

That's the 2 of coins in the Tarot de Paris.

The card with the words Jehan Bresson is recognizable at the top. It also has this "Gonzaga style". 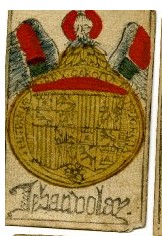 That was so far my consideration.

However, from the material on the aluette.net webpage there are similar pictures of the ace of coins, the first from a time from before 1512. I'll show them below.

The webpage seems to be managed by a Jacques Leonard, who appears as author at this list ...
http://recherche-archives.vendee.fr/arc ... e/ALLUETTE
... which contains studies to the game or deck Aluette since the 1920s, then written by a Marcel Baudouin ...
http://stgil.e-monsite.com/pages/person ... logue.html
... and related to the region of Vendée (a french departement at the West coast of France, filled with relative small locations). The region got in the recent past some attention cause of resistance against French governments (1793, 1815, 1832) and nowadays it's the major location of a political party, the Mouvement pour la France
http://fr.wikipedia.org/wiki/Mouvement_pour_la_France
The life of the author Bauduin reads like hero literature. Beside many other engagements he engaged also for Aluette. This part of the texts is online. Bauduin died 1941.
There's other later Aluette literature mentioned, and Jacques Leonard appears as one of the authors.

I don't understand, what's the specific interest in this research, my French isn't so good for such details. The picture collection looks rather good. A research about Aluette.

"Aux luettes" appears one line above "Au tarau" in the game list of Rabelais in 1534.

Well, I'm interested in the Ace of Coins: I have collected the ace of coins, as far they are available and have a bird on top or something, which looks like a bird (till 1700). This are ...

... an earlier picture of the aluette.net page. 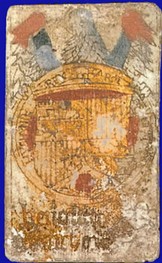 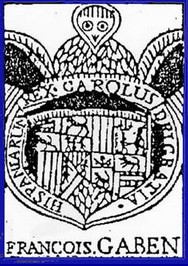 Other Aces of coin in the same collection

The game: French Wiki has a longer page than the Spanish wiki ... perhaps an indirect statement, who plays the game more intensive. Pagat.com gives historical remarks from Thierry Depaulis.
http://www.pagat.com/put/aluette.html


Aluette is a four-player trick-taking game, but although the players play in teams of two, the partners do not combine their tricks. The object is to win more tricks than any other individual player, or in case of equality to be the first to have won them; the team of the player who achieves this wins the point. Thierry Depaulis has provided the following historical introduction.

Aluette (or la Vache, "The Cow Game") is played in Vendée and the coasts of Brittany, using a 48 card Spanish suited pack with special designs. Aluette is a very peculiar trick-taking game where suits are irrelevant. Partners can use gestures to signal what cards they hold. The play mechanism is similar to that of early games like Truc / Trut and Put, and it cannot be a coincidence that 3's, 2's and aces are high cards in all these games. The use of Spanish suited cards is surprising, but there is a theory that these suits were originally used throughout France and were displaced in most of the country by French suits when those were invented in the 15th century. Aluette may be an extremely old game: some late 15th-century records from the South-West of France mention a card game called Luettes. However, it is clear that Nantes is the modern cradle of the game, and until about 1700 there was in Nantes a large group of Spanish merchants, and Spanish suited cards made in Thiers (Auvergne) were conveyed on the Loire river up to Nantes where they were shipped to Bilbao and Navarra. Therefore a late introduction, perhaps in the 17th century, through Spanish merchants in Nantes is also possible.

The two of coins of the Tarot de Paris looks a little bit like the Ace of cups in the Aluette game.

The Ace of coins in the Tarot de Paris looks a little bit like the Ace of Swords in the Aluette game. 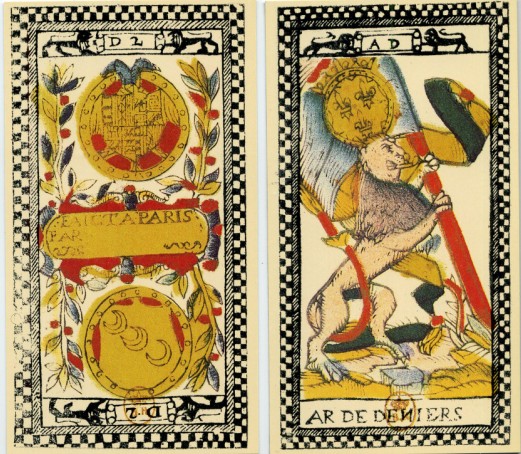 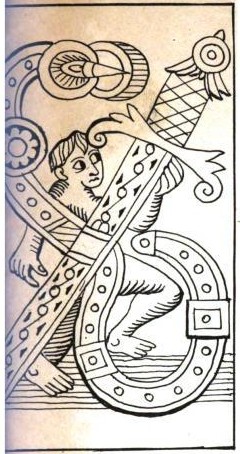 #39 by Huck
A discussion to this theme takes place in the moment ...

#40 by SteveM
Ah! Thanks for the reminder (I had forgotten about the Aluette) --