#31 by mikeh
As to the relative dates of the Vievil, Noblet, and Tarot de Paris, Flornoy says of the Noblet,

And surely Love's backdrop could as well be a sunburst as a cloud. In the Milanese tarot, there were lots of sunbursts. Although drawn differently, it was a device of the Sforza ,and before them the Visconti, A cloud is only natural if you've been looking at the Charles VI. Who knows what they were looking at, or thinking of, in 17th century Paris? A sunburst is perfectly natural--Love's power, indeed Love himself, springs from the supernal sun, said the Chaldean Oracles, that wellspring of the prisca theologia, in at least some of its editions printed before 1600, And the Christian god of love, Jesus, materializes from God the Father. Both members of the Trinity were symbolized by that heavenly body.

My edition was the one of 1543; I haven't seen the earlier ones. It might be wrong to assume it is there, but I suspect it would be.

But the jurist Andrea Alciati, the famous author of the Emblemata in another of his works, the Parergon Juris appeared for the first time in 1538, in Chapter XVI named De ludis nostri temporis...

and there follows the passage about "cross," "fama," etc.

I assumed that Vitali knew what he was talking about. I have not checked the 1538 edition personally, except to verify that there was one--two or three, actually. according to WorldCat.


I have a question: what does "sol" mean in the Petrarch, Boiardo, and Folengo, where it occurs along with "fama." I can't see where there is a word in the English translations corresponding to it. It does not seem to mean "sun": does it mean "alone," or what?

Yes, this seems possible ... in the opinions of the translators. I'm not sure, if the translations are in each case correct.
If "sol" was used as a keyword, which intentionally referred to systems like "Trionfi poem" or "row of the Tarot cards", it might easily be, that readers are confused about it in translation attempts. How to interpret Alciato's poem, if you don't know about the row of the Tarot cards?

German Wikipedia, I referred earlier to it. For the moment I found no confirmation, but the article made a competent impression.
Huck
http://trionfi.com

Note that it only has three books; Alciato added other books in later editions, and our chapter is in Book VIII of the 1543 edition, if I remember correctly.

I can't find the chapter we are looking for in the 1538 book.

Interesting he would publish the same book in two different cities in the same year.

Our passage occurs on page 90.
Note that the title page and date is missing - the date is Google's.

The Bayerische Staatsbibliothek digital 1544 version is not much better, adding only one page (book 4, chapter 2).
http://reader.digitale-sammlungen.de/de ... 00001.html

#34 by robert
I think the Paris is usually dated to "early 17th century", so it could be 1600 to maybe 1650, taking it back further is interesting, but challenging, especially since, as Mike has noted, it shares the same backs as the Dodal, Vieville and Noblet.

Also to note on the Paris is that the cards have Italian abbriviations on them, so there is a connection to the Italian names of the suits names, not French.

Also, I want to stress that what I have said in my comments above are the questions that I am exploring, not the answers.

But it's all theories, and very much a work in progress.
The Tarot will lose all its vitality for one who allows himself to be side-tracked by its pedantry. - Aleister Crowley

If I see it correctly, also the 1539 edition didn't note the passage? So your 1543 edition is the earliest known ?

So good, that we cleared this problem: 1543 is the first Alciato date with Fama Sol. 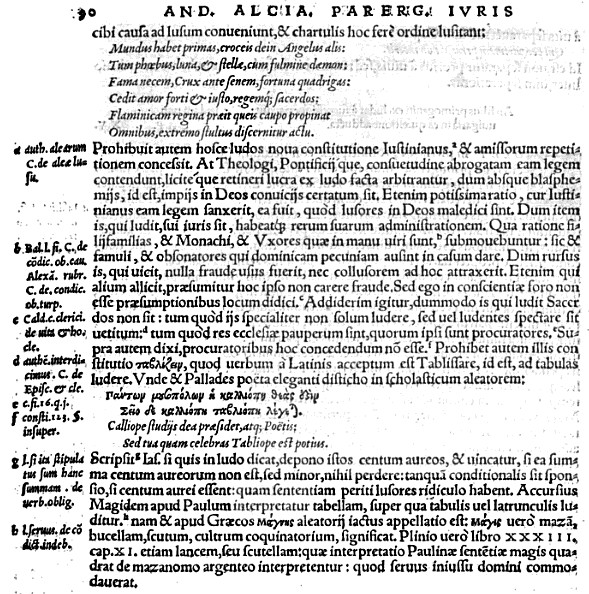 Well, this is possibly the oldest document of the birth of a stronger Tarot side path. What about a translation of the total passage? It seems all relevant for games.
[/quote]
Huck
http://trionfi.com

#36 by Ross G. R. Caldwell
I think I might have been referring all of this time to the 1544 edition. I can't find a 1543 edition of the seven supplementary books (posteriores) anywhere.

So all references to 1543 should be provisionally updated to 1544.

Ross G. R. Caldwell wrote:
So good, that we cleared this problem: 1543 is the first Alciato date with Fama Sol.

#38 by Ross G. R. Caldwell
I think the Boiardo quote "dopo la morte sol fama n'avanza", reflecting the Petrarchan, and, more distantly, the classical theme of fame transcending death, might help explain why Temperance is elevated above Death in the C orders.

But the question remains, why Temperance? Sometimes Fame is personified holding a sword and scales like Justice, and would have been a perfect double-duty image in this case. I have never seen Fame personified with the attributes of Temperance - except in some Tarots and the Alciato trump list.

It seems easier to believe that Temperance occupied that spot before becoming identified with Fame. The question of "why" remains in either case, however.

Yes, you're right, not "Fama Sol", but "Fama with connection to Tarot card position 14", which later reappears as "Fama Sol" also in connection to Tarot card position 14 in the Vievil and the Belgian development. But Alciato somehow seems to refer to earlier "Fama-Morte-Sol" developments, possibly to Folengo, to Boiardo and to Petrarca's Trionfi model.
Huck
http://trionfi.com
Bertrand
Bertrand

mikeh wrote:As to the relative dates of the Vievil, Noblet, and Tarot de Paris, Flornoy says of the Noblet,

From my guesses and understanding, the backs were possibly not produced by the cardmakers but bought from the dominotiers (I don't know the english term).
A late but possibly signifying clue about that is that when dominotiers changed their jobs from creating repeating patterns by blockprinting to painting marbled papers, the backs of the cards chanded in a similar fashion.
As the three known tarot deck from different cardmakers in Paris in the 17th century share the same back, it is highly possible that the backs were made by someone else, a dominotier or several dominotiers creating the same local pattern.
There are no documents I know about that, but it may be an usage adopted locally to use a similar pattern for that type of deck, as we know the cardmakers were organised together and used to discuss together regarding the legslations and taxes - so we can suppose that they agreed on the usage of the backs, for the Tarots.

(I have a very ridiculously small doubt here because of a bad fac simile of Vincent Goyrand's (attributed to) standard deck which uses the same back, but he was from Lyon and as far as I know the back of his cards should have been white, as is alas not visible here http://visualiseur.bnf.fr/Visualiseur?D ... &O=7919598 I guess the back is simply chosen randomly within the patterns from the approximate same period - thanks in advance if anyone can confirm this deck originally had a standard white back)

The decks using the "sol fama" word are particularly puzzling regarding the temperance allegory - Vieville, Hautot and the Belgians. The Paris deck is close but different with the Atrempance representing a woman pouring water - to temper a fire ? or maybe is she pouring oil ... or maybe is she making a quenching ("trempe" in french).
The "temperance" thread doesn't propose anything close.

As a side note, regarding the "sol fama" in Vieville, an hypothesis that might interest in particular Mike H. (and might irritate some other fellows here) is that it is a reference to the FAMA from the Rose-Croix - this is developped in Charly Alverda's book "trois figures hiéroglyphiques" which proposes an alchemical lecture of the Vieville's deck.