Gerolamo (or Girolamo, or Geronimo) Cardano (French Jérôme Cardan; Latin Hieronymus Cardanus) (24 September 1501 – 21 September 1576) was an Italian Renaissance mathematician, physician, astrologer and gambler. His gambling led him to formulate elementary rules in probability, making him one of the founders of the field.
..
Today, he is best known for his achievements in algebra. He published the solutions to the cubic and quartic equations in his 1545 book Ars Magna. The solution to one particular case of the cubic equation 0= ax^3+bx^2+c (in modern notation), was communicated to him by Niccolò Fontana Tartaglia (who later claimed that Cardano had sworn not to reveal it, and engaged Cardano in a decade-long fight), and the quartic was solved by Cardano's student Lodovico Ferrari. Both were acknowledged in the foreword of the book, as well as in several places within its body. In his exposition, he acknowledged the existence of what are now called imaginary numbers, although he did not understand their properties
...
Cardano was notoriously short of money and kept himself solvent by being an accomplished gambler and chess player. His book about games of chance, Liber de ludo aleae ("Book on Games of Chance") , written in 1526, but not published until 1663, contains the first systematic treatment of probability, as well as a section on effective cheating methods.
...
Cardano's eldest and favorite son was executed in 1560 after he confessed to having poisoned his cuckolding wife. His other son was a gambler, who stole money from him. He allegedly cropped the ears of one of his sons. Cardano himself was accused of heresy in 1570 because he had computed and published the horoscope of Jesus in 1554. Apparently, his own son contributed to the prosecution, bribed by Tartaglia. He was arrested, had to spend several months in prison and was forced to abjure his professorship. 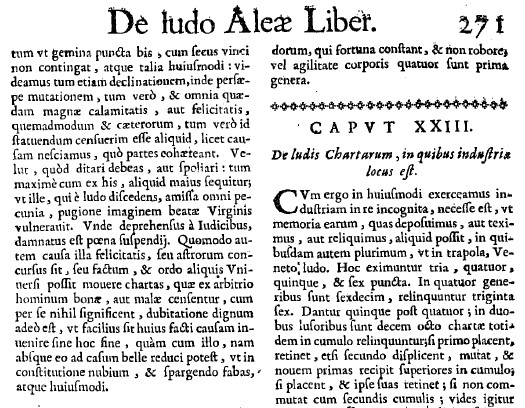 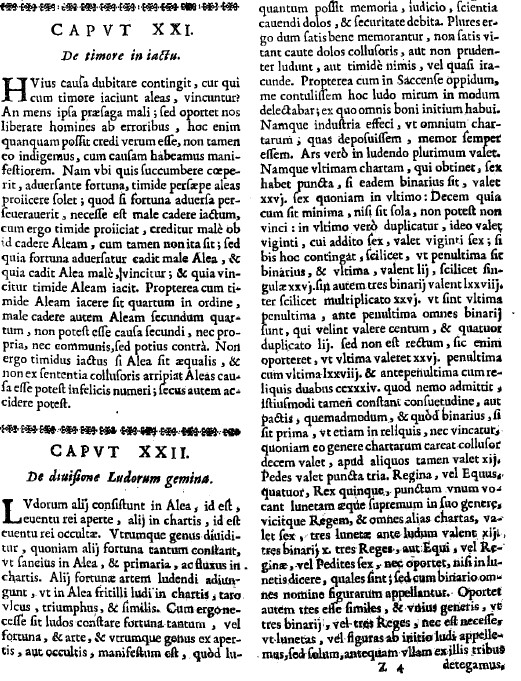 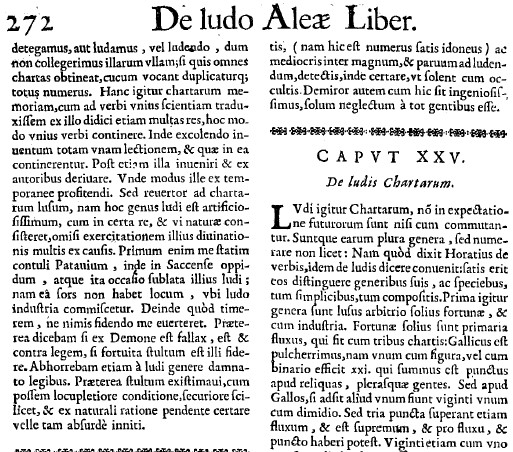 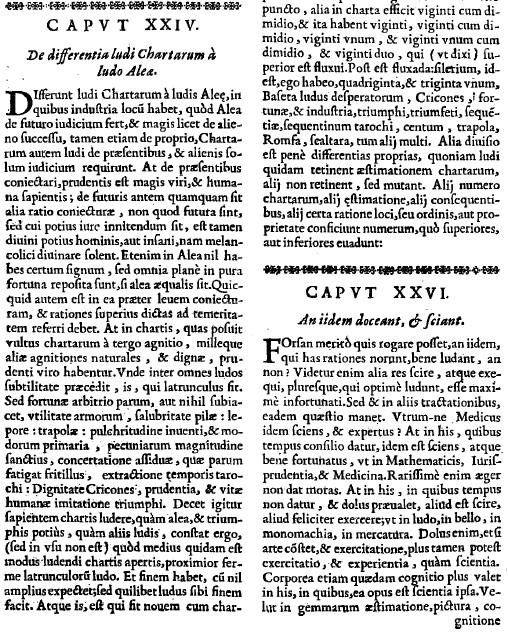 For Cardanus as Chess player I found the following


The physician, astrologist and humanist Girolamus Cardanus (1501-1576). Cardano or Cardan (inventor, among other things, of the wheel transmission known in mechanics as "cardan transmission") gives an important clue about the content of the lost incunabulum of Vicent (1495). A brilliant doctor and mathematician, Cardan spent in Milano most of his life. He was a welcomed guest in many European courts of the time, though always under suspicion of harbouring in himself "a genius and a demon". He left 249 written works, which are collected in the ten volumes of his "Opera Omnia" Lyon 1663. Many other writings went lost. Cardan wrote also a chess book, which likewise disappeared. In Chapter XIX of "De vita propia" Vol. I, p. 14 Cardano complains about the time he lost by playing chess and "io capisco di essere degno di censura per la smodata passione da me risposta negli scacchi e nei dadi. Giocai nell´una e nelláltra maniera per molto tempo, a dli scacchi per più di 40 anni e ai dadi per circa 25.; ne solo per tanti anni, ma, ho vergogna di dirlo, in quegli anni quasi tuttii giorni; e cosi perdei insieme reputazione, denaro e tempo". In his will dated 18th January 1566 gives as advice to Fazio (son of his executed son Gianbattista) to avoid all kinds of games. The chess treatise of Cardanus should have been written between 1521-22 and according to his own words was finished in 1524. The text began with the sentence "Non per vitio alcuno" ("It is not a matter of vice"). Cardanus seems very proud of his achievements, due to the big amount of chess materials included in his book. "40 combinazioni, i tranelli che in esse si possono fare, le regole aritmetiche per vincere e un modo cosi mirabile che i molti i quali lessero il libro, da ciò trassero per noi fiducia in più seri argomenti, ammirandone l´impegno e la meravigliosa abilità". Some of the positions must have been rather complicated: "per quanto io trovi ancora nel mio libro sugli scacchi molte e belle trovate, parecchie tuttavia andarono perdute, essendomi dovuto occupare di altro; ve ne furono poi 8 o 10 che non potei più riconstruire e che mi sembrava sorpassare veramente ogni umana destrezza e ingegnosità di invenzione." The important point is that in his treatise "De rerum varietate" (1557), Cardanus remarks that he composed his chess book with great effort, and makes several comments about the best way of printing diagrams. The practical problem was to print a black piece on a black square, and Cardan suggests a sensible way of solving it: instead of making the square completely black, it is better to make the square "striped". The Latin paragraph reads: "Loci nigri lineis nigris, quasi cancellis sunt distinguendi...latrunculorum vero figurae nigrae quidem tota superficie atramento tingantur..". Cardan mentions as a bad example that "those who printed the Spanish book confounded everything": "Qui hispanicum librum emiserunt, omnia confunderunt". The question is, which Spanish book is Cardan referring to? Lucena's book contains no mention of his printers, and only typographical research has established recently that the printers were Leonard Hutz and Lope Sanz. But on the contrary, Vicent's book stated clearly in the colophon that the book had been printed by Lope de Roca "Alemany" and Pere Trincher. So, Cardan was obviously referring to Vicent's book, and this book was therefore well known in Italy in the middle of the XVI century. This point suggests that at least part of the 100 chess problems compiled by Vicent were already modern chess. Bibliography: Angelo Bellini "L´autobiografía di Girolamo Cardano" Milano 1929, Adriano Chicco "La vita scacchistica di Girolamo Cardano" en Fortuna degli Scacchi nell 1500, Milano 1946 .Alessandro Sanvito "L. introvabile manoscrito di Girolamo Cardano" en L. Italia Scacchistica N. 1058, January 1994, pp. 6-7 Oye Ornstein "Cardano, the gambling scholar", Princeton 1953, Franco Pratesi "Le intelligenti cavalcate del Cardano" Scacco. Bergamo 1993, Van der Linde. "Geschichte..., II, pp. 49-50. Von der Lasa "Zur Geschichte..." pp. 181-183(19).]

So a lost chess book, written rather early and its early date makes the early dating of De Ludo Alea (c. 1526) probable.

From 1540 to 1542, Cardano abandoned his studies and did nothing but gamble, playing chess all day.