#1 by Huck
I stumbled about a silver deck article and attempted to get a full list of extant silver playing cards as far it is known. My sources were (beside some web data):

According this there exist following decks and cards:

French suits, 12 cards, 83 x 53 mm, engraved on silver. Engraver is Alexander Mayr or Mair and the date is 1594. According the Christie's article Alexander Mayr only signed the deck and the true producer had been Hans Pfleger of Augsburg
Biography http://daten.digitale-sammlungen.de/~db ... &seite=115
This is oldest known deck on silver (?).
It was reprinted in 1973 by Buschmann in Antwerpen (Braun: cat. 1236) and again by Braun in 1977. It has only 12 original cards (this seems to have been not clear always - this error seems to have been caused by the reproductions of the deck, which took cards of Jost Amman as replacements). 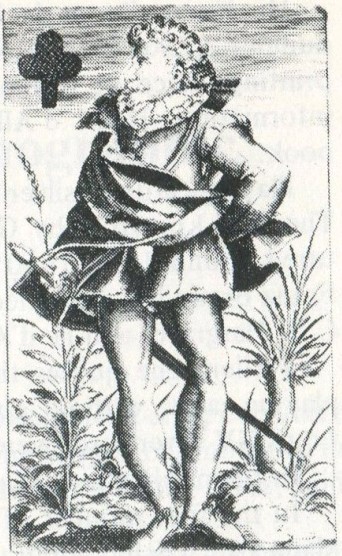 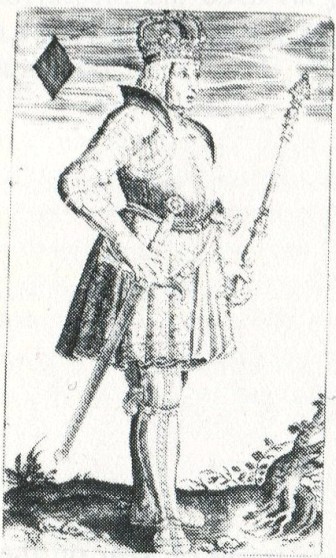 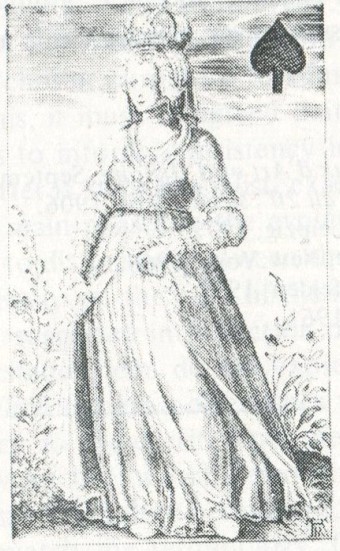 (I know no pictures)

Museum of Völkerkunde Berlin had 3 decks, from which 2 now are in Kunstgewerbemuseum in Berlin (according Christie's)
a. 44 of 48 cards, German suits, made by Paul Goettich (or Goettig) in Augsburg ca. 1615. The Suits are persons from 4 parts of the world.
b. 10 pip cards with French suits by Michael Frommer according the IPCS-article, Augsburg (when the deck was photographed in 1905, only 2 cards were missing, today it's completely lost according Christie's).
c. 50 cards of 52(?). Italian suits. 87x49. Paul Goettich in 1613.
All three decks were part of the Pommersche Kunstschrank project, produced by Philipp Hainhofer in Augsburg
for Philipp II of Pommerania, at begin of 17th century
Further material:
The Pommersche Kunstschrank
http://de.wikipedia.org/wiki/Pommerscher_Kunstschrank
The owner of the Kunstschrank
http://de.wikipedia.org/wiki/Philipp_II._%28Pommern%29
The producer of the Kunstschrank
http://de.wikipedia.org/wiki/Philipp_Hainhofer
The deck were described with the Kunstschrank by "Beschreibung der in der Königl. Kunstkammer zu Berlin vorhandenen Kunst-Sammlung" by Franz Theodor Kugler (1838) 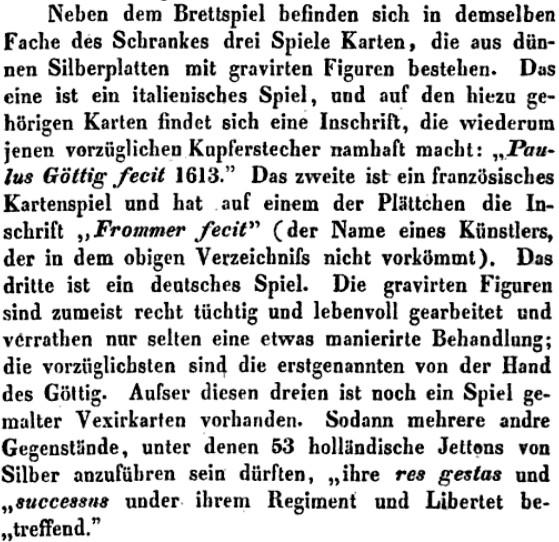 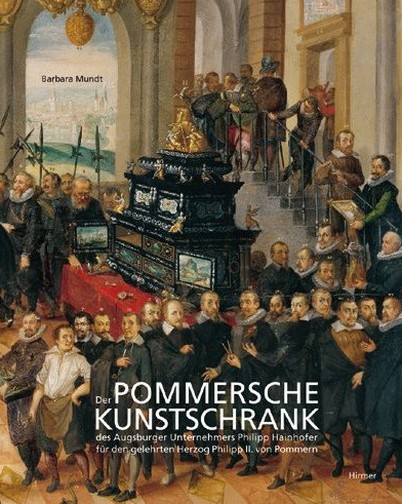 (I know no pictures)

Deck at Christie Auction 1971, Spanish suits, possibly made in Italy in 17th century. 40 cards. The deck has similarities to a deck at Fournier. 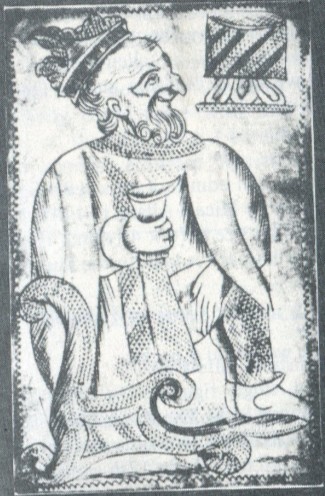 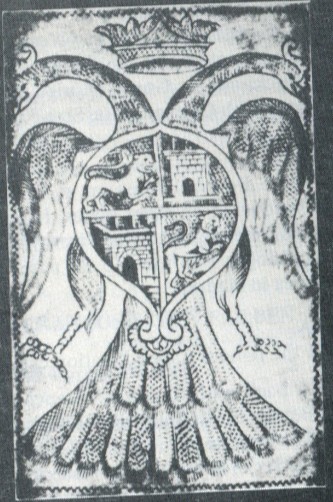 (I know only this two pictures from source 2)

a. Fournier Museum at Vitoria, Spanish suits lacquered on playing cards. Micael Aluna 1745 for viceroy of Peru. 76x46 mm, 40 cards.
b. A similar deck shall be at Museum of America in Madrid.

The Fournier deck should be the deck shown at the page of Simon Wintle:

and 8 more at this page:
http://www.wopc.co.uk/peru/silver/index.html

(I know only this pictures)

Bibliotheque national Paris. Silver mini-pack, earlier in possession of Merlin. German suits with monogram "I.W.". 34 of 36 cards. 10x14. Merlin suggested a production in Holland. The same deck shall be in the Cary-Collection. 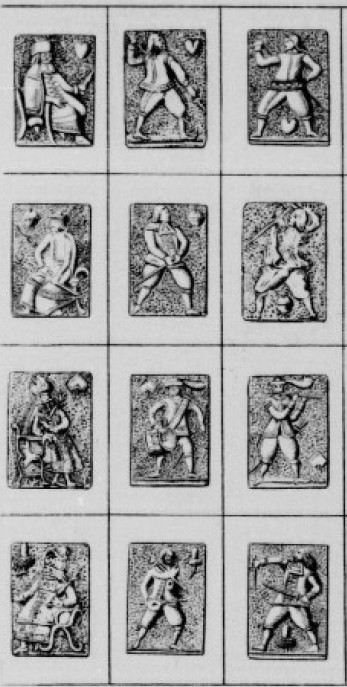 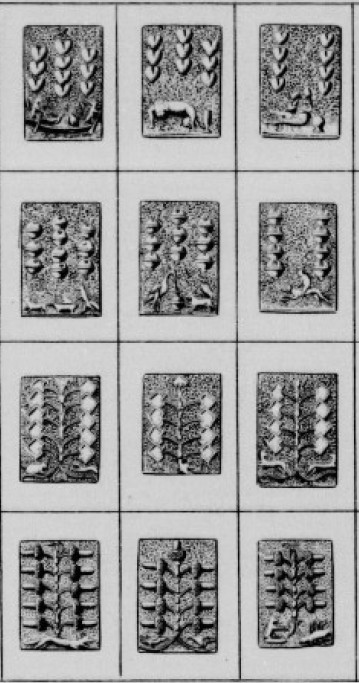 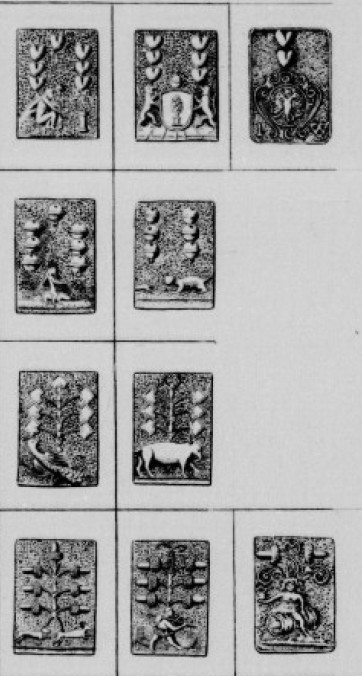 The Cary Collection shall have further silver cards, beside the miniature deck, which is identical to the Paris of Merlin.
a. 52 cards, French suits. The engraver was Beuner of Augsburg, ca. 1600. 86x47 mm.
b. Spanish deck, 40 cards, ca. 1800, engraver unknown
c. A deck of Georg Heinrich Bleich, with his monogram at the six of leaves. The Cary collection dates this to
"1690".
Unluckily I don't find the pictures online at Beinecke's digital representation.

The Bleich deck (that from Cary-Yale I assume, but in no way I've a confirmation for this) appeared in "Abdrücke eines vollständigen Kartenspieles, auf Silberplatten gestochen" by Georg Heinrich Bleich (as producer) and Carl Förster (as researcher) in 1881.
The art expert Dr. Carl Förster from Munich got the request from Count Friedrich von Rotheburg to make an inventory of his art collection. Förster found a card deck made from silver, 36 cards, German suits and the inscription on the frame "GOD ENDOWS THIS GAME WITH LUCK THAT LETS ONE LIVE PEACEFULLY" (translated naturally), which should be actually more or less the same inscription as on the silver deck described by Richard Sibela below, which was found in the Museum in Krakau. The motifs show similarities, but also enough differences. Förster printed from the engraved cards deck 200 copies and published them in 1881. 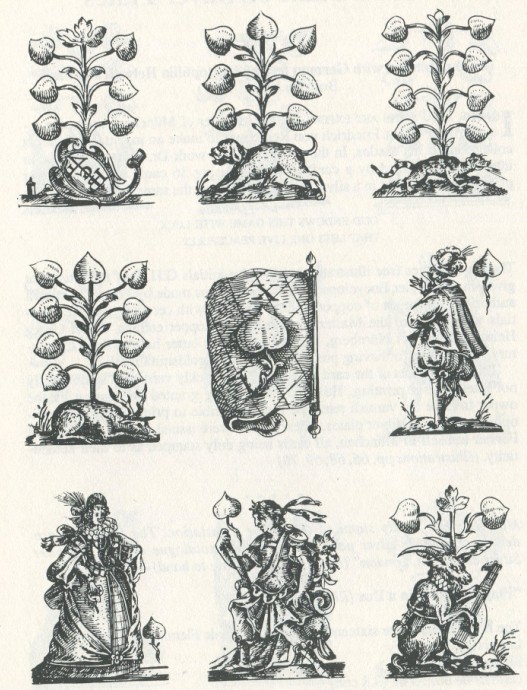 (all pictures at source 3)

The Museum Csartryskich in Krakau has a silver card deck with German suits with 35 of 36 cards (Eichel-7 is missing). An inscription is found at a silver band, which keeps the cards together. The year 1619 is readable and the inscription "GOTT WOLL ZU DIESEM SPIEL GLICKH GEWEN DAS MAN DAR BEY FRIDTLICH THVE LEWEN. One of the cards shows GHB, the signature of Master Georg Heinrich Bleich from Nürnberg. Two cards seem to be replacements.
Sabela found a note about the cards in "Poczet pamiatek zachowanych w Domu gotyckim w Pulawach, Warschau 1828, which includes an inventory of the Czartoryski family.

Information to this family:
http://en.wikipedia.org/wiki/Czartoryski_family

This was a second deck by Hans-Georg Bleich (after the version in the Cary collection), for this new deck the assumption seems plausible, that it was made "1619", but the article of IPCS assumes 1650-60 as production date for the other Bleich deck described above, and the Cary collection even speaks of 1690 at their website. I couldn't find a biography of Georg Bleich for the moment to have an own opinion to this point. 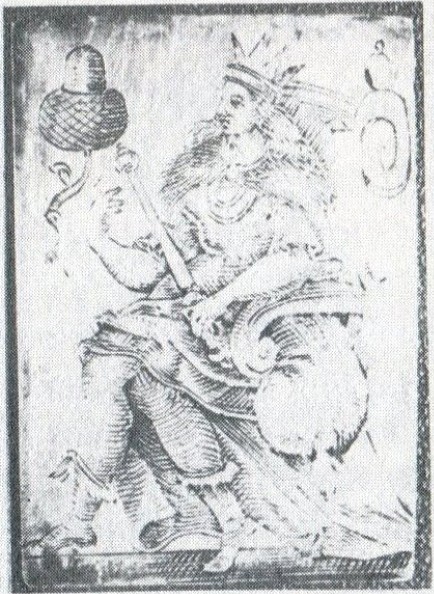 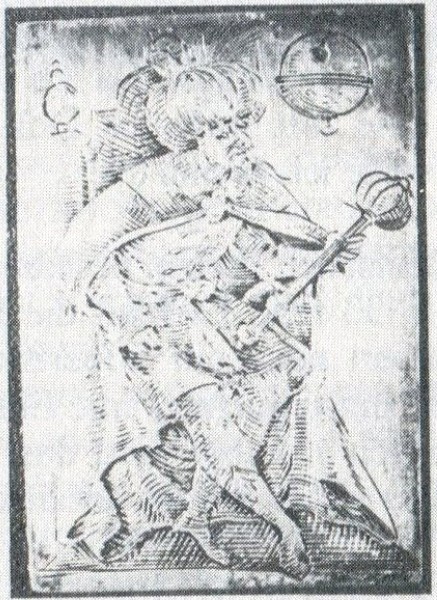 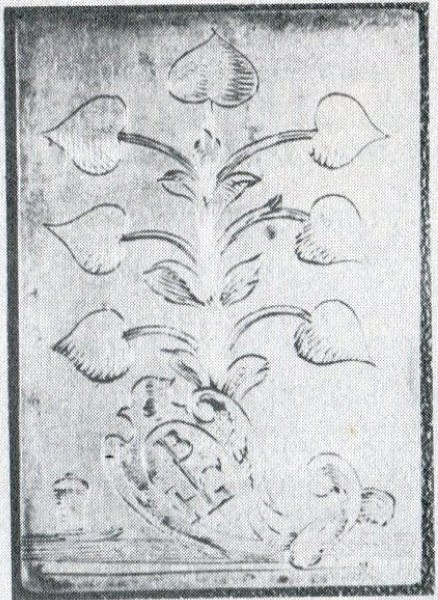 (9 pictures are given at source 4)

29 cards shall be at the Schroder silver collection in London

(I don't know the pictures)

10. Source 2 mentions silver cards from from 20th century in Stuttgart-Leinfelden, I left them aside as too young.

AN EXTREMELY RARE SET OF GERMAN ENGRAVED AND PARCEL-GILT SILVER PLAYING CARDS
SIGNED MICHAEL FRÖMMER, AUGSBURG, 1616
A complete set of 52 cards engraved in the four Italian suits: swords, batons, cups, and coins, each suit with a king, a knight, a knave, and pip cards ace through ten; the Knave of Swords signed M. frömmer fec, the Ace of Batons dated 1616; with a tooled-leather shadowbox case set with a brass plaque engraved with provenance
Each card 3 3/8 in. (8.6 cm.) high, 1 15/16 in. (5 cm.) wide (52)
Pre-Lot Text

PROPERTY OF A DESCENDANT OF GEN. MANUEL ORIBE OF URUGUAY
Provenance

These cards, according to family tradition, were given to Josefa Oribe y Viana de Contucci, ancestor of the present owner, by Infanta Carlota Joaquina of Spain (1775-1830). Princess Carlota was daughter of King Carlos IV and, as wife of King João of Portugal, Princess of Portugal and Brazil. During Napoleonic struggles, Carlota was exiled to Brazil with the Portuguese Court. When Napoleon forced her father to abdicate in Spain, she became claimant to the throne of Spain and Spanish America. Following the patriotic revolution in Buenos Aires in 1810, she ordered Portuguese-Brazilian troops into Montevideo to protect the interests of the Spanish monarchy. Carlota's emissary in South America and the director of her military efforts there was Felipe Contucci. Carlota presented these cards to Contucci's wife, and they descended to the present owner as follows:

Documentary evidence shows that silver playing cards were an essential component of the princely kunstschrank, or art cabinet, of the late 16th and early 17th centuries. These cabinets, equipped with both artificialia and naturalia, represented the world in microcosm through an array of objects representing man's artistic and scientific achievements combined with natural rarities from exotic locales. The ambitious purpose of these cabinets - to display the education, sophistication and immense wealth of their owners - perhaps overshadows another function, which was simply to delight, astonish, and entertain. Card games joined board games, trick cups, "fun-house" mirrors and other amusements in a designated area of the cabinet. The celebrated Pomeranian Kunstschrank was fitted with three decks of silver cards in French, German, and Italian suits, conveying the worldliness of the owner by his ability to entertain in three "languages." Michael Frömmer, maker of the present set, contributed the French-suited deck to the Pomeranian Kunstschrank, which like most of the known cabinets of the period, was assembled and supplied by Philipp Hainhofer (1578-1647) financier, diplomat, and art dealer of Augsburg.

Despite their popularity among noble clientele -- records show that Hainhofer had supplied silver cards to the courts of Bavaria, Tuscany, and Brunswick among others -- only five sets of silver playing cards are known to survive today. The present set is the only complete deck in existence, a remarkable survival. The two extant decks from the Pomeranian Kunstschrank are now at the Kunstgewerbemuseum in Berlin; one of these, the Italian-suited deck, is virtually identical to the present set but was signed by engraver Paul Göttig in 1613 (missing two cards). The other, a German-suited deck, is unsigned (missing four cards). Michael Frömmer's French-suited deck is now lost, although it was photographed and published in 1905 when it was missing just two cards. A partial set of 29 German-suited cards in the Schroder Collection is thought to be Flemish or German, late 16th century. The only other known set, by Hans Pfleger of Augsburg and signed by the engraver Alexander Mair in 1594, has just 12 cards remaining, and belongs to the Royal Museum of Art and History in Brussels. (See: Barbara Mundt, Der Pommersche Kunstschrank, 2009, pp.249-255, figs. 31-33; Timothy Schroder, Renaissance Silver from the Schroder Collection, 2007, no. 62, pp. 188-190; Michel Ceuterick, Augsburgs Zilver in België, 1994, no. 43, pp. 102-103. The lost Frömmer set is illustrated with the other two sets from the Pomeranian Kunstschrank in Julius Lessing and Adolf Brüning, Der Pommersche Kunstschrank [im] Kgl. Kunstgewerbe-Museum, 1905, Pls. XXXIX and XL.)

... and here it was sold for 554.000 Dollars, more than twice the value, as it was suspected.
http://www.luxurylaunches.com/auctions/ ... uction.php 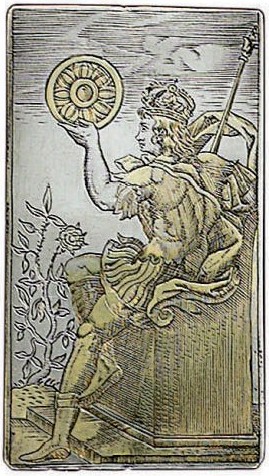 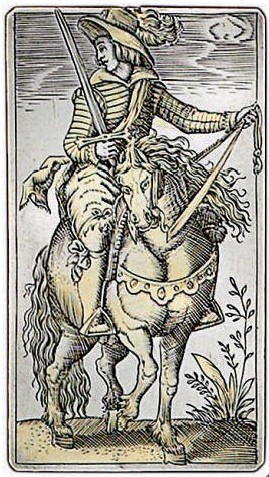 Only my own dark memory tells me, that I stumbled some time ago about a single silver card in the web, from which it was said, that it was made ca. 1520. For the moment I don't remember, where I found it.
Huck
http://trionfi.com