#1 by Huck
This object was treated later (September 2012) under better research conditions in the thread
Hooper's Conversation Cards 1775
...
viewtopic.php?f=11&t=879 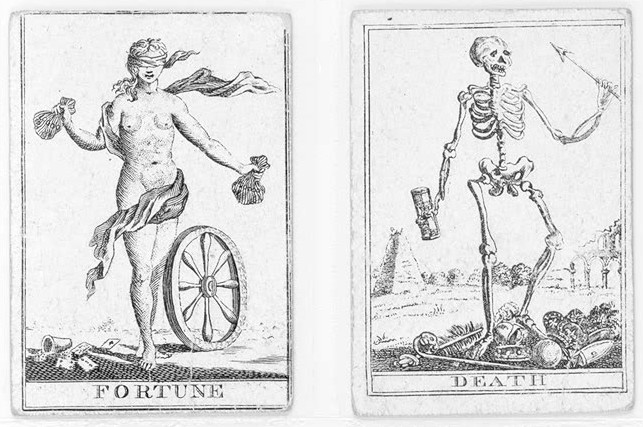 It seem to be 53 cards, though the Beinecke page uses "Eng 60" as a call, so "English 60 cards" perhaps? I don't know. Some cards resemble Tarot, but the whole might be a 19th century fortune-telling deck. It has a Fool called "Oeconomy", so perhaps understandable as 52 + Joker - deck.

The 53 names are according the representation:

Fool = Oeconomy, but also a "folly or idleness" (man riding an ass)
Magician = harlequin or player (but this card contains two persons, so possibly Oeconomy ?)

4 Persons, but that's English, and they don't have an Emperor or a Pope

somebody-nobody is a curious pair, I would assume old maid = Popess and old bachelor = Pope, and Gentleman as Emperor and Lady as Empress (England had democratic ideas)

Love we've once as "Hymen or marriage" and once as "Cupido" (likely meant as love outside of marriage)
Chariot - here we have an equipage and - very English - a ship, and the card means "honour"

Justice ... we reach the 4 cardinal virtues and we've Justice, Prudence and Fortitudo, but no Temperance
Justice we've also as "law
or security", Fortitudo also as "courage" (this with lion, but without female) - Fortitudo itself is a killed man before a throne with king. What's the twin to Prudence ... it seems to be school. Might be also "Wit", but this seems to contast with "Fop". And where's temperance? No idea.

Fortune ... is given, but which is its twin? No solution for the moment.

We've a hanging man, possivly related to "crimes"
We've death and possibly a physician for it as twin.
We've ruin, which mightrelate to the tower
Industry looks like the sun of Tarot, woman with spindle.

Maybe I think better later about it.