A two-language edition (Hewbrew-German), which is - according Weberpals - based on a work of the Venetian rabbi, philosoph and writer Leon da Modena, published 1595 in Venice with the title "Ssur Meda" ("Lass vom Bösen" - Psalm 34, 15). The plot is the discussion of two students, Medad and Eldad about the value of gaming and gambling. It's structured in 6 chapters:

1. Both meet at a walk
2. Medad (first student) defends playing.
3. Eldad quotes from the bible evidence against playing.
4. The interesting chapter, cause here playing cards are mentioned, and also some references to Jewish scholars, who might have something said about cards.
5. Both argument with poems.
6. Medad agrees with Eldad superior arguments and promises to leave playing.

Chapter 4 is from p. 51 - 72
The passages, which Weberpals found interesting, refer to 4 sources:

1. Maimonides: a tractatus about "rauben" (stealing, theft) and from this the 6th chapter (real name unknown for the moment).
Maimonides lived 1135 - 1204 and at the end of his life in Egyptia, so, if this would be right, playing cards would have been at least in Egyptia at end of 12th century, a longer time, before any Mongols reached Europe.
2. A Rabbi "Moses Mikkozi" writes under the laws ("Geboten und Verbote") Nr. 73 (the place is unknown for the moment)b about cards and dice.
As I myself further discovered in the text, there should be also something under Nr. 214. A web check about "Moses Kikkozi" led to few entries and mentioned works, but not to the real person, so no dates of his life.
3. A Rabbi "Schelomo ben Addereth", who wrote something like "Responsis" and there he mentioned cards and dice. A web check led to "Shlomo ben Aderet" and other writing forms ..
http://en.wikipedia.org/wiki/Shlomo_ben_Aderet
http://www.jewishencyclopedia.com/view. ... 9&letter=A
... and a medieval rabbi, halakhist, and Talmudist, living 1235 - 1310 in Barcelona, Spain. So, if this would be correct, it would give evidence, that playing cards would have been in Spain in 13th century or at least at begin of 14th century.
4. A book with the name "Tur"

I personally further discovered a passage, according which the Gemara already contained the combination of dice and cards ... and this looks rather unbelievable. If now Maimonides and the both others just spoke with the same words, then the author of 1595, Leon da Modena, should be the author of the idea "Würfel and Karten in 12th century" ... if it was not caused by an misunderstanding of his German translator.
So I felt not really interested to research for this early passages.

Here is a popular article
http://www.jewishmag.com/64mag/gambling/gambling.htm
... and in it also Maimonides and Moses de Leon appear, so both texts and positions seem to be well known,so hardly one could discover anything "long unknown" with it.


Italian scholar, rabbi, and poet; son of Isaac of Modena and Diana Rachel; born April 23, 1571, at Venice; died there March 24, 1648. He was a descendant of a prominent French family. His grandfather Mordecai became distinguished both as a physician and as a philanthropist, and was raised by Charles V. to the rank of Knight of the Order of the Golden Fleece. Leon was a precocious child. His father, who was then in good circumstances, gave him a complete education, not neglecting even such worldly accomplishments as singing and dancing. Leon's masters were successively Azriel Bassola, Hezekiah Galico, Hezekiah Finzi, and Samuel Archevolti. At the age of twelve Leon translated into Hebrew verse the first canto of Ariosto's "Orlando Furioso," and about a year and a half later he wrote his dialogue against gambling, which passed through ten editions and was translated into Latin, French, German, and Judæo-German. Even at this early age he was not only well versed in Hebrew and rabbinical literature, but was conversant with the classics and possessed a fair knowledge of mathematics, philosophy, and natural history.

Besides preaching and teaching, Leon exercised not less than twenty-six professions [preacher, teacher of Jews and Christians, reader of prayers, interpreter, writer, proof-reader, bookseller, broker, merchant, rabbi, musician, matchmaker and manufacturer of amulets are mentioned in English wiki] but all his resources were swallowed up in gaming, and his material condition was rendered thereby a source of perpetual anxiety. To his monetary troubles was added a series of family disasters. Of his three sons, Mordecai, who was endowed with great ability, died at the age of twenty-six; Zebulon was killed in a brawl with his comrades; the third, Isaac, after having led a life of dissipation, emigrated to Brazil, and was never thereafter heard from. Of his two daughters, one died during his lifetime; the second lost her husband, and she and her family became thereby dependent upon Leon for support. In 1641 Leon's wife became insane, and remained in that state until her death. Amid all these trials Leon continued to study, write books, compose poems, relieve the distresses of others, so far as that was in his power, and—gamble. This last occupation involved him, in 1631, in a struggle with the leaders of the community, who launched an excommunication against any that should play cards, or take part in any other game of hazard, within the period of six years. On this occasion Leon wrote a brilliant dissertation, in which he demonstrated that the leaders had acted against the Law; the excommunication was accordingly revoked.

Following notes (in the above mentioned sources) I found interesting:

"One of his most effective works was his attack on the Kabbala (Ari Nohem, first published in 1840). In it, he attempted to demonstrate that the "Bible of the Kabbalists" (the Zohar) was a modern composition. He became best known, however, as the interpreter of Judaism to the Christian world." "In ari nohem ("Brüllender Löwe") attackierte er die Kabbalah und widerlegte das behauptete hohe Alter des Buches Zohar."

A work of his many works: "Leb Aryeh. A method of mnemonics applicable in all sciences, with the 613 commandments according to Maimonides. Venice, 1612; Wilna, 1886."

"He wrote a fascinating autobiography entitled "Chayye Yehuda," literally "the life of Judah". In this highly candid and sometimes emotional work, he admitted to being a compulsive gambler."

Also one should think about this ...
"At the age of twelve Leon translated into Hebrew verse the first canto of Ariosto's "Orlando Furioso, ... " which tells, that he very actively and early adapted Ferrarese culture (born in Modena) and the theme "Orlando" naturally is a little bit connected to Tarot.

Re: Playing Cards in 12th century ?

#2 by Ross G. R. Caldwell
Here is Weberpals' 2001 article (click on the link below if the pages are illegible). I'm guessing that if we found the source texts, they would say something about games of chance, and wouldn't use the word "karten" (or its Hebrew equivalent in Maimonides). It is simply too anachronistic. Remember that beginning in the 16th century, moralizers would often translate old sources that forbid games of chance by the phrase "cards and dice". 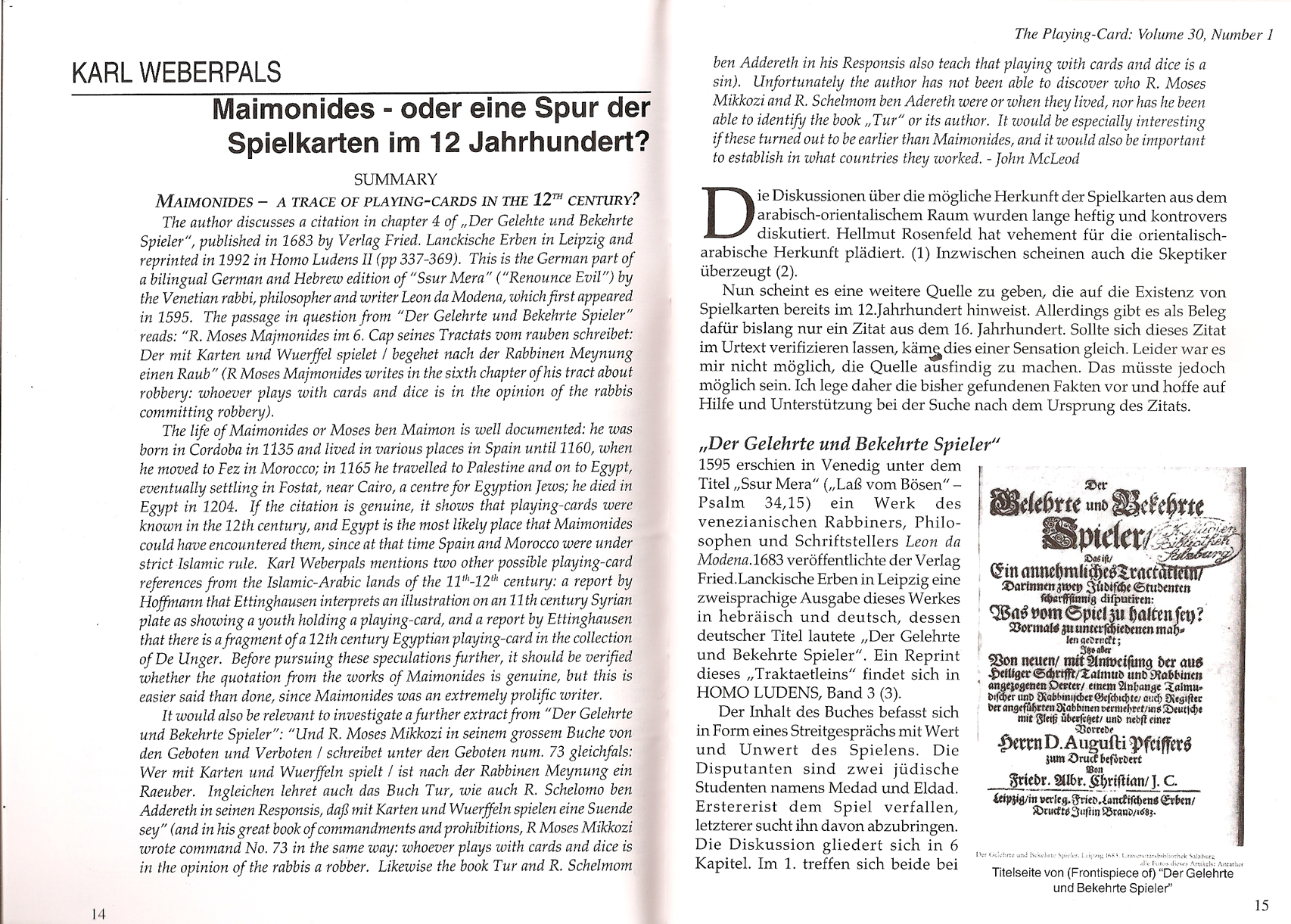 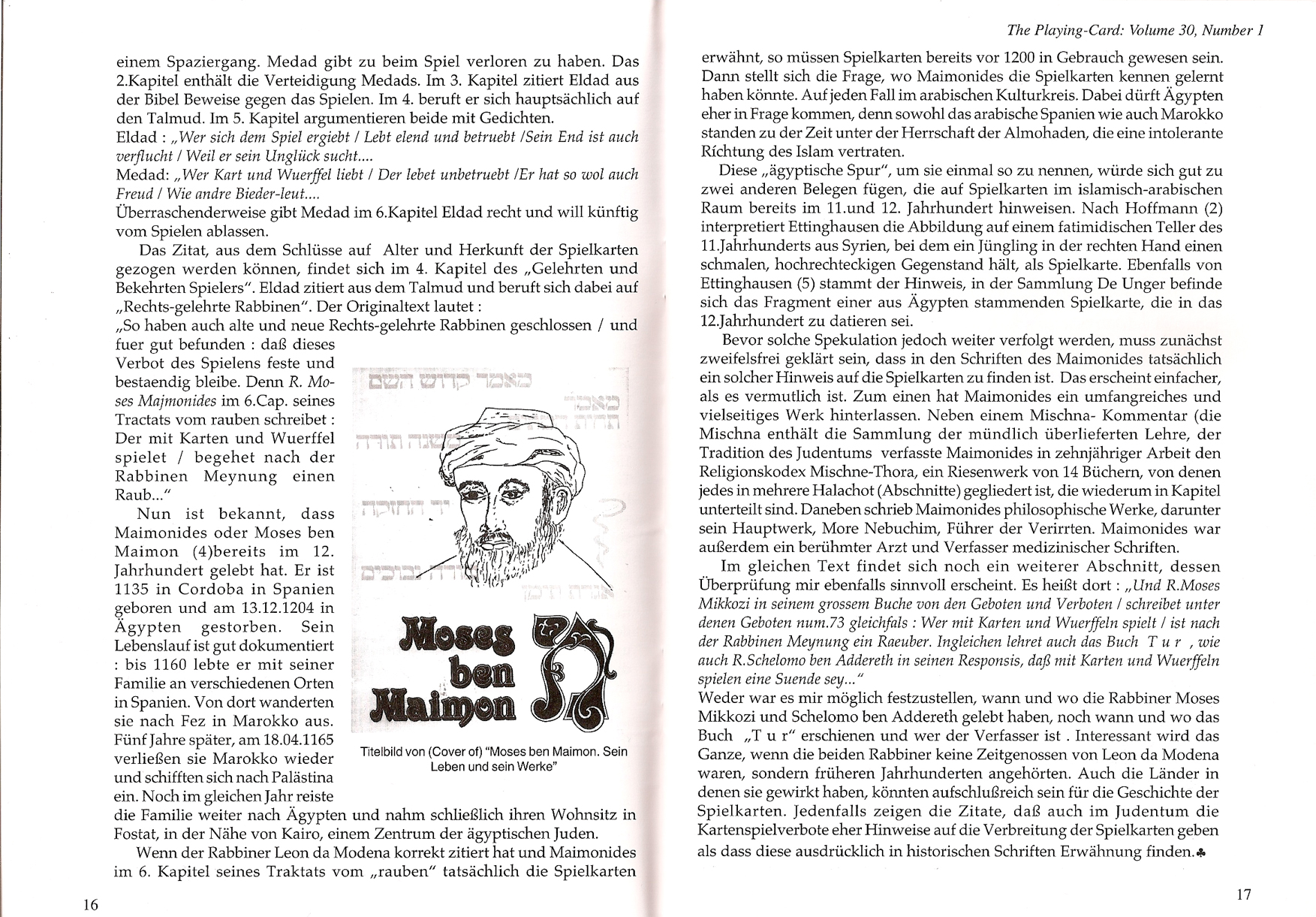 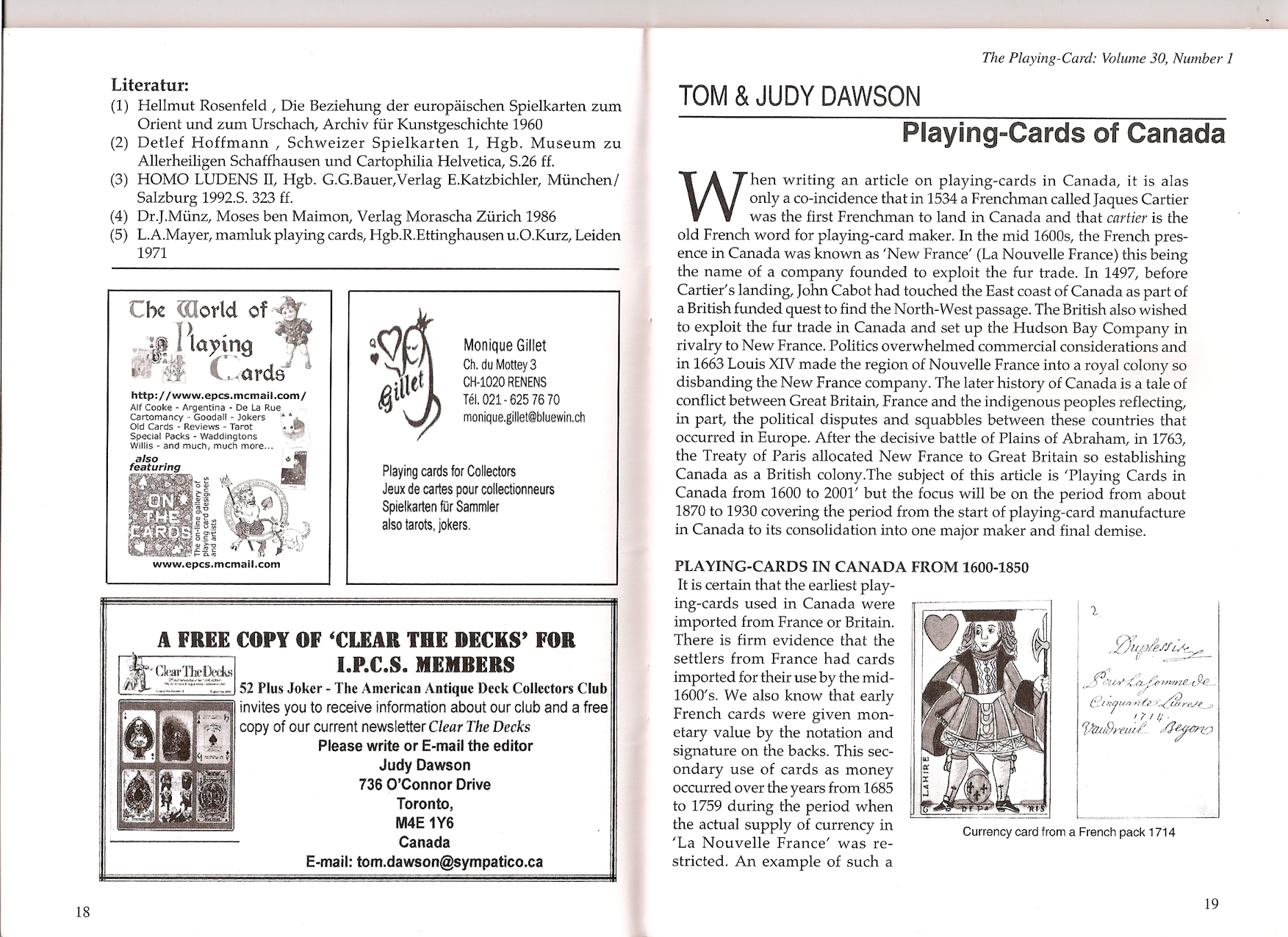