OnePotato wrote: That would be a foliot verge escapement.
It is a part of an early clock.

OnePotato wrote:Sort of.
That would be a foliot verge escapement.
It is a part of an early clock.

You can see a modern repro of one here:
http://www.uh.edu/engines/foliotverge.jpg

And here is a nice drawing of the mechanism, along with some background:
http://en.wikipedia.org/wiki/Verge_and_foliot 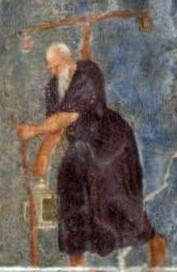 Indeed it's interesting, that we've a clear mixing of Time (clock) and lantern.
Huck
http://trionfi.com

#13 by Ross G. R. Caldwell
Thanks very much identifying this object, OP.

I note that it also resembles a "T", which makes it not only metaphorically appropriate to use for an allegory of Time, but also a visual pun, Tempus, Tempo, Temps, Time.

About the picture pages one could forget (bad prints at least in my edition), so the article isn't long.

Casa Cazuffi is the smaller house-part at the left (I think, I wrote this wrong earlier). This paintings are believed to be earlier. Casa Rella is the more interesting right part.

Fiorita sees a similarity between the Rouen Tarot card Fortuna ...

.. and a motif at the upper row of Casa Cazuffi. 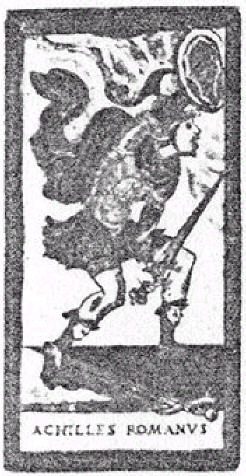 ... and a similarity to a figure Envy (at Casa Rella) to the Ursino Tarocchi card of Temperance 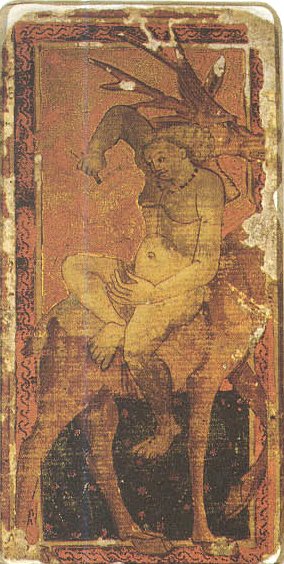 Also he gives pictures of death and 3 different hermits (well, very bad pictures) ... not sure, what he wants to show with it. Also he notes an Angel.

The major object is to the writer the upper small row, in which he counts 3 different Trionfi between parting medallions where he counts 8 + 6 + (7+1) = 22 figures ... which lets him think of Tarot.

This upper row has three inscriptions, one for each Trionfi:

He suggests this translation (as an idea): Wealth, Beauty and Grace lead the Chariot ruled by Laziness, beside whom stay Rage and Suspicion; Love is the King, decrepit Time, Sorrow, sad Modesty and gloomy death follow.

The long Day and bright Experience lead the Light whose reins Virtue holds; hostle to them , Haste, Ignorance and Vulgarity

This is the chariot that carries the Wealth of triumphant things that is preceded by Discernment, Cleverness and Industry and Fortune rules Time, Poverty, Envy and the deadly discord of War

In a foot-note, perhaps the most interesting part for us, he notes (in cointext of his observed angel-similarity):

OnePotato wrote: If you google "lantern clock" you'll discover something hollow about the popularly held theory of a copyist's "error" that resulted in the shift from an hourglass to a lantern in the Hermit.
It's not an "error" if there's nothing "wrong" about it.

Have a nice day.

I don't think we've gotten rid of the transformation of an allegory of Time into a Hermit with a lantern so easily.

The "lantern clock" itself doesn't seem to be portable, and 1530 appears to be a very early date for it to have existed (the wikipedia article says they may have originated "before 1500", but in northern European countries).

The thing that our Time is holding does not appear to be a clock of any kind.

The Metropolitan Museum and Budapest Museum sheets show the figure clearly carrying a lantern, not a clock.

Allegories of Time, for illustrations of Petrarch's Triumph of Time, at least from 1480 in Italy, do sometimes show Time standing on a clock - but is clearly a clock (with a numbered face and hour hand), and it is not a "lantern clock".

Finally, the figure is a hermit with a lantern in French decks; he is even called a "Capucin" - a monk - in some. He is not holding a clock.

The interesting thing about the Time-figures on the Casa Rella is that he is holding a lantern (not a clock, at least I can't see any indication it is a clock). Thus, this is like a "missing link" in the transition between an allegory of Time and mundane hermit carrying a lantern in the dark (or a reference to Diogenes, carrying a lamp during the day, looking for a wise man?). If Time can be just an old man with a lantern, with but one allegorical component like a foliot escapement, then all it takes is to get rid of the weird allegorical part and what you have left is an old man with a lantern.

What do you mean?

It's all allegory. A lantern-clock may be made for hanging on a wall, but an hourglass isn't made to be carried around, either. The hourglass symbolizes time, with or without the old man holding it. So much the better when combined with an old man who also symbolizes time (Saturn, maybe, or a monk who must watch the time for the sake of daily prayers). It's all artistic license for the sake of conveying the meaning.

OnePotato doesn't say that this particular wall image shows a man carrying a lantern-clock. If I take his point correctly, it's a witty depiction of the man AS a clock.

debra wrote: It's all allegory. A lantern-clock may be made for hanging on a wall, but an hourglass isn't made to be carried around, either. The hourglass symbolizes time, with or without the old man holding it. So much the better when combined with an old man who also symbolizes time (Saturn, maybe, or a monk who must watch the time for the sake of daily prayers). It's all artistic license for the sake of conveying the meaning.

OnePotato doesn't say that this particular wall image shows a man carrying a lantern-clock. If I take his point correctly, it's a witty depiction of the man AS a clock.

I read OP to mean that we might interpret the object he is holding as a "lantern-clock". I disagree, since the object is not a clock, and, from what I gather about the history of lantern-clocks, we shouldn't expect one here (time and place) anyway. But the primary evidence is the iconography itself - there is no indication that it is a clock.

The interpretation of the old man himself as the "clock face" on a foliot mechanism driven clock is clever and persuasive.

I don't agree that "it's all allegory", in all Tarots. You might say they are all symbolic, but not all symbols are allegories. The Pope, for instance, might symbolize the idea of "the papacy", but he is not an allegory of the papacy. In the case of this card, some Tarots explicitly call him "Time" and illustrate the concept with an allegory of Time (old man with wings, crutches, hourglass; sometimes a pillar (no doubt to symbolize the ubi sunt, "where are they (now)?" aspect)). Other Tarots call him "The Old Man" (Il Vecchio) or "The Hunchback" (Il Gobbo). In Tarots where he is called "The Hermit" or "The Capuchin", it could be just an illustration of a hermit or a capuchin monk, rather than an allegory of anything. Representative instead of allegorical, in other words. On the other hand, an old, hunchbacked man on crutches - like on the Rosenwald sheet - might be a sufficient symbol of Time, and hence an "allegory" (which Gombrich translated nicely as "saying something else" (Symbolic Images (Phaidon, 1978) p. 19). In other words, it has to be argued on a case by case basis.

I don't believe that the iconography of each card in every Tarot trump sequence was conceived as part of a coherent narrative.

#18 by debra
OnePotato didn't say or even imply that this particular Hermit is carrying a lantern clock as far as I can see. I didn't say or imply that it is "all allegory, in all tarots." I don't know who might say that "the iconography of each card in every Tarot trump sequence was conceived as part of a coherent narrative."

The important point, I think, is that among the many ways to represent "keeping time," the verge escapement in these images is one we haven't had identified 'til now. A wonderful discovery.

#19 by marco
I have recently been in Trento and I took photographs of Casa Rella.
Here are details of the second and third triumphs, with my proposed corrections to the IPCS English translations posted by Huck. I took these photographs at noon and the frescos were crossed by the dark shadow of the roof: I tried to improve the images with a graphic software, but the results are far from good

Long days and experience carry truth with a bright
light. It is virtue who stirs their reins.
Hostile hatred against them, ignorance and vulgarity follow.

This is the abundance of things, carried on a triumphal chariot.
She is preceded by the discernment of life, dexterity
and labor. And those are ruled by fortune. She is followed by time, poverty,
envy and discord with dire war.

#20 by Ross G. R. Caldwell
Welcome back from your vacation, Marco!

Thanks very much for the photos and translations. I find these two triumphal scenes to be good formal or structural analogues to how I imagine the Tarot trump sequence was intended to be read. I like to think that the Tarot's creator also wrote a verse explaining the choice of cards in the sequence.