Gods on triumphal chariots in 1460-64 look a little bit early for the general Trionfi development, though not impossible, it wood be more natural for the 1470's. So I've my doubts. As the devil will it, it isn't impossible, that a calendar-paper from 1465 was mixed with a later work of art ... that's just a humble and easy "forgery" by book binding, which might create "revolutionary perceptions" of conditions, which might well have been different.

The date of the copies can be fixed as 1464-65 by the presence of a calendar plate which has always been attached to the set i the British Museum, and by size and style definitely forms part of it, and which covers the years 1465-1517.

. He has reproductions of the copies and the calendar, and as far as I can tell he is right.

Also, both Hind and Lambert say that "trionfi" imagery to illustrate Petrarch was standardized in the 2nd quarter of the 15th century. Here is Hind (1938, I p. 32:

No theme outside the stories of Scripture gave more frequent employment to artists and craftsmen of the fifteenth and sixteenth centuries than Petrarch's famous series of poems, the Trionfi. It is found alike in illumination, in tapestry, in the painted decoration of marriage-chests and birth-trays, in pottery and enamel, in relief sculptures of bronze, marble, or ivory, in engravings whether on metal or on wood.
About the second quarter of the fifteenth century the scheme and character of such designs became curiously fixed and uniform, within certain narrow limits of variation.

Hind then asks why, although Petrarch had only one of his powers on a chariot, the artists had all six. He answers that

The probable explanation is that to the ordinary Italian craftsman of the Renaissance the mere word "trionfo" as a matter of course suggested a chariot procession. He was familiar with the idea of Roman triumphs, had seen and copied them on many an ancient bas-relief, and the civic usage of his own time had revived something like them in innumerable street processions and public shows and pageants.

For the various cassone paintings representing the Triumphs of Petrarch, the student should refer to V. Massena, Prince d'Essling, and Eugene Muntz, Petrarque, ses etudes d'art, son influence sur les artistes (Paris 1902) and Paul Schubring, Cassoni: Truhen und Truhenbilder der Italienischen Fruhrenaissance Leipzig 1923. The most important of these pictures between 1440 and 1450 are Four Triumphs (Love, Death, Fame and Divinity) in the Uffizi, No. 198 (by the so-called Cassone Master, about 1440) (Schubring 208-211; and plate xlv); another Four Triumphs (Love, Chastity, Death and Fame) at Siena (Nos. 768-771, Schubring 213-216); and the Six Triumphs on two panels, by Pesellino, in the Gardner Collection, Boston (Schubring 266, 267 and pl. lx); these all precede the present series of engravings by about a decade.

The "present series" is a series of six engraved triumphs that Hind dates 1460-1470. These early Triumphs, as well as another series of six on one plate, are quite interesting from a tarot history perspective, as are the series on the planets themselves. As Hind notes, they have a wealth of detail missing from the later engravings. I have not seen any of these three series on the Web or in tarot books; but Huck would know better than I. I will post the "Triumph of Love" on the "Mantegna" thread. Since they are long before any festivals in 1475, I'm not sure they belong here. Right now I want to continue making the point, ad nauseum, about how early the iconography of the Triumphs developed in Florentine art.

Lambert often disagrees with Hind. But on this point she plagiarizes him (p. 114:

My translation: Petrarch (1304-1374) wrote The Triumphs in 1352 or after. The manuscript was published in Rome in 1471 or after, but the poem was well known before this date. Among the works of Petrarch, it is the one that inspired artists of the XVth and the XVIth centuries the most. This figurative theme seems to have developed in the Florentine environment during the second quarter of the XVth century. The iconography derives from the taste of the Renaissance for antique triumphs, known from bas-reliefs. Holidays profane and religious took for models these triumphant processions, where allegorical figures raised on cars symbolized triumph, victory. Illuminations, paintings tapestries, ceramics, enamels, bas-reliefs of bronze, marble or ivory, birth and marriage chests, engravings on copperplate and wood reproduced them, offering a very free interpretation of Petrarch's poem, even departing from it sometimes. Figurative arts presented for every triumph a personified allegory, on top of a car pulled in harness by symbolic animals and accompanied by personnages. 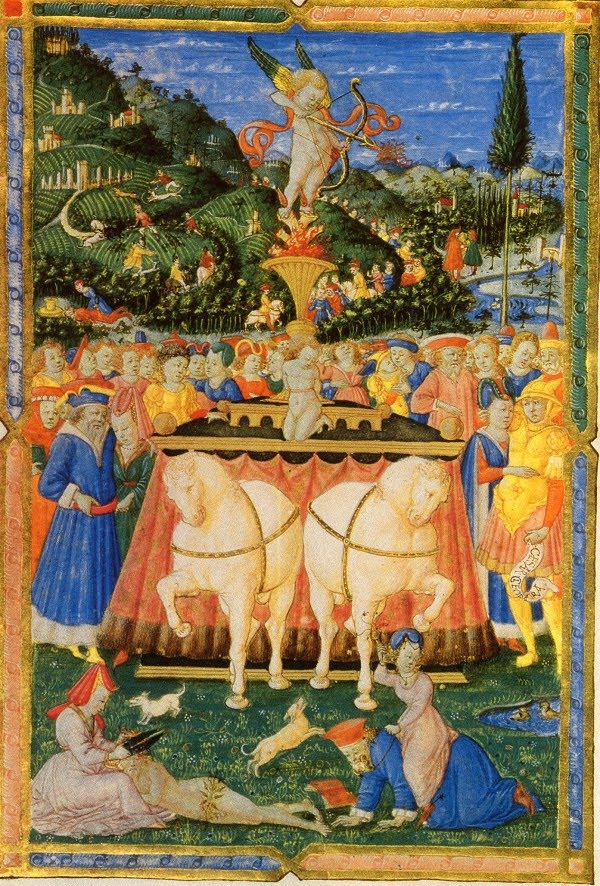 #12 by mikeh
Here is a comparison of one of the Florentine "planets" engravings attached to the calendar that enables historians to date the engraving to 1464-1465, plus part of the calendar. You can see the year "1465" written in the top left box. I apologize for the blurriness: it is a copy of a copy of Hind's reproduction. The engraving of Luna (and her "children") is in turn a copy of an earlier one, part of an earlier series, sometime 1460-1464, attributed to Baldini by Lambert (1998) and Finaguera by Hind (1938). You can see the similarities in style. The only difference I notice is that the letter S is not reversed in the calendar. If the reversed S is a signature,then perhaps the letterers were different. 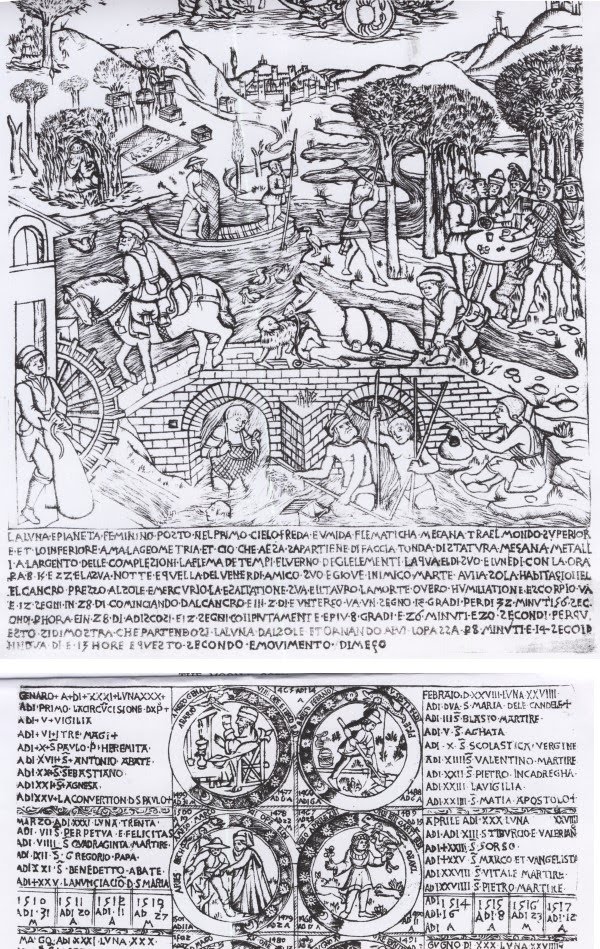 An interesting feature of this "children of the Moon" is that at least two of the three coins (or balls, or bubble blower) on the Bagatto's table are clearly joined together by string or wire, like on the Noblet Bateleur, and less obviously the d'Este card, but different from the Conver. (The dating of the d'Este card, I guess, should be c. 1475). The other "children of the Moon" that I have seen just have the objects, some of them touching, but with no sign of the string or wire. 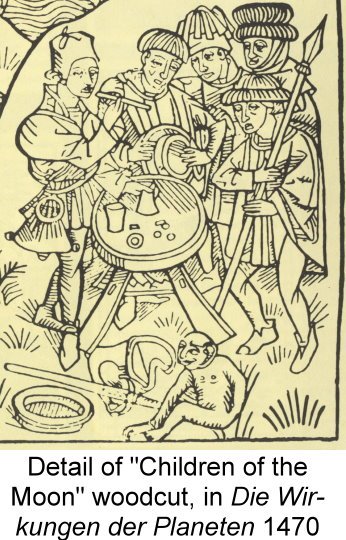 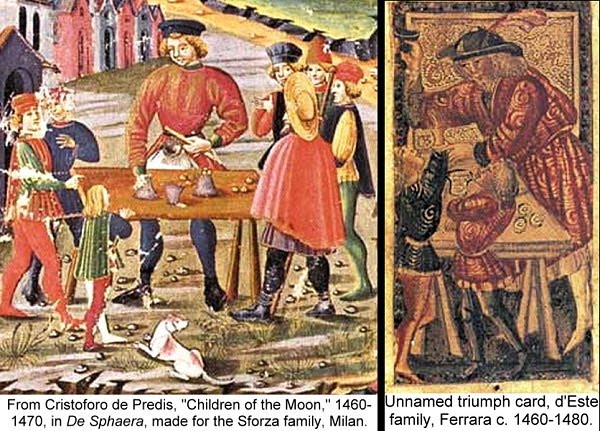 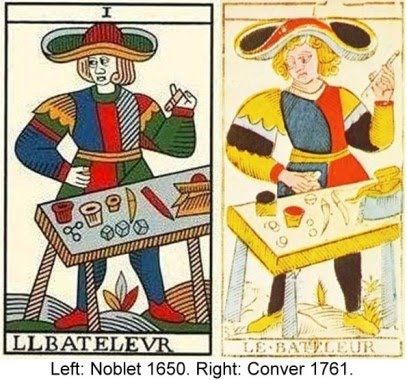 #14 by mikeh
By "top left box" I meant the top left illustration on the calendar. The number "1465" is in the top right corner of this square illustration, outside the circle.

#15 by Huck
It's a pity, it's not really recognizable.

But, considering it as true, that these pictures were made 1465 or a little before, one cannot overlook that astonishing much astronomical things happen around this time.

* German printers from Mainz arrive in Subiaco, one of them (Sweynheim) suspected to be competent in copperplate engraving (1464)

* Donnus Nicolaus Germanus is suspected to have been in Florence (1464), possibly identical to the printer Nicolai Laurentii, who is in Italy since 1452 and known for a cooperation with Thaddeo Crivelli, who later paints worldmaps. Donnus Nicolaus in 1466 sells painted Ptolemy maps, in 1477 2 globes, one for the earth and one for the heaven.

* An interest of the team Bessarion-Cusanus-Pius in astronomical content and Ptolemy, which leads to presence of Regiomontanus in Rome and Italy since December 1461

* An edition of 1467 of the Echecs Amoureux in Burgund, with 16 gods, some on a chariot

All these mixes of international art seem to indicate, that's it is a possibility, that a German/Burgund copperplate engraver might have been the engraver of the 7 planets in Florence 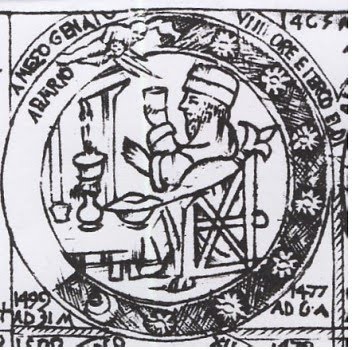 #17 by Huck
Thanks ...
it stays obscure, what this about.
Huck
http://trionfi.com
mikeh
mikeh

#18 by mikeh
I just wanted to make sure you saw it. It looks pretty clear to me, as it did to Hind and all the other art historians who have examined it.

What I don't understand is why you think a person from Flanders, Burgundy, or Germany might with any reasonable degree of probability have done this planet series. The style is Italian, Florentine to be precise. Someone would have to have seen and copied numerous Florentine paintings of the mid-15th centuries to do this work. It comes directly out of the niello style of Finiguerra. It is an adaptation of the German, Flemish, etc.themes to the Italian style, as I quoted Lambert as saying. Yes, there was an international iconographic fashion of depicting planets and months at that time; it started during the Middle Ages and continued on the other side of the Alps. This is the Italian version.

#19 by Huck
Well ...
it's partly my vague impression, that calendars had more interest in regions north of the Alps. Possibly this is simply cause of the reason, that they much more had to fight with the weather, so a general higher attention to seasons and months.

... probably it's difficult to see from the position of America the difference of German and Italian weather and climate. It's considerable.

Also I don't trust these datings of Italian copperplate engravings. ...

I will try to summarize the book. But I need a couple of days.

Regards.
When a man has a theory // Can’t keep his mind on nothing else (By Ross)