Franco writes in the introduction ...

"A large part of the content of this book has first appeared in 2013, as individual notes in the web pages of Trionfi.com ..."

The material, that Franco presented in 2013, was very much (let's call it gigantic) and was dedicated mainly to the development of Minchiate through the centuries. This new book seems to present an overview for the material by giving references to the links of the webpages, it doesn't focus Minchiate, but playing cards generally (Minchiate is included). Some new material, which I don't recognize, seems to be inserted.
Well, I got the book yesterday and had not much time with it. It reminds the council of Constance (1414-1418) and the many prostitutes, which spend some time in the city in this period. The report gives 750 prostitutes as their number, other notes spoke of 4000. 
I would like to introduce myself. My name is Martin Jarvis and I have been a collector of playing cards for nearly 30 years. During that time I was a member of both the IPCS and the EPCS. I have recently taken the very difficult decision to sell my collection and it will be at Stroud Auctions, Gloucestershire, England on 8th May 2019 at 10.00 am. See http://www.stroudauctions.co.uk and http://www.the-saleroom.com

There are over 250 lots and the collection is mainly pre-1900 and of course predominantly English. However, nearly one third of the lots are from other countries around the world, the largest sections being France and Germany and a smaller section on Italian cards. To give you an idea of some of the cards in the Italian section: Chiari, Florence pattern c1840; Fabbrica Perfezionata di A.G.D.R., Bologna c1860; Fabbricatore Felice Rossi, Milan Lombardy tarot pack c1815; etc.

Please have a look at the catalogue and forward my email to playing card collectors who may be interested. The catalogue is online with full colour photographs and the auctioneers welcome live online bidding, live telephone bidding or alternatively commission bids and also offer an in-house packing and postage service, very useful for distant bidders.
Many thanks for your help.
Best wishes,

My note: Likely one has to fill the search field with "playing cards" , if one wants to see the catalogue.
I found it that way. I didn't see Tarot cards, but some objects are interesting. Lot 60 captured my interest. The prices are moderate.
Huck
http://trionfi.com

#384 by Huck
I detected a used 1-Euro book in a shop for antiques (all books take 1 Euro there). "Das geheime Abendmahl", original is Spanish "La cena secreta" (2004) and English "The Secret Supper" (2006). The English version seems to have been a big success, the text is said to have been translated to many languages

I'm at 2/3 of it and find the German version boring. The story plays in 1497 in Milan at the burial of the young Beatrice d'Este, wife of Lodovico Sforza, at the court of Milan.
Somehow the Tarot card Papessa (Pierpont-Morgan-Bergamo deck) is involved in cases of murder, which happen around the production of the "The Last supper" by Leonardo da Vinci.

reference sheet: Kaplan II. p. 276, clearly from a Tarocchi sheet (Group 2, according Kaplan)
... it seems to be a musician, and the upper part is a riddle, not recognizable

reference sheet: Kaplan II. p 277, not clear, if it is a Tarocchi sheet (Group 3, the card has other other neighbors on the sheet). The size seems to be different.
... it is a musician and he drinks from a cup. It is the page of cups.

from another sheet (group 3), now with more colors

Those are extremely odd "page of cups" if that's really what those are. The Bologna Fool, for example, also plays a wind instrument (a singular pipe vs bagpipes) but also plays a drum (a stock image from the time) , to connote revelry - drinking from a large goblet would simply to be a variation on that theme. And also note the Sola Busca Fool also plays the bagpipes:

I also find that large goblet held up by the head quite similar to the Alessandro Sforza "Temperance" card (the tooled outline of the goblet is barely discernible):

#387 by Huck
Important text about Master of the Playing Cards

Actually I had the source, but I overlooked the article. 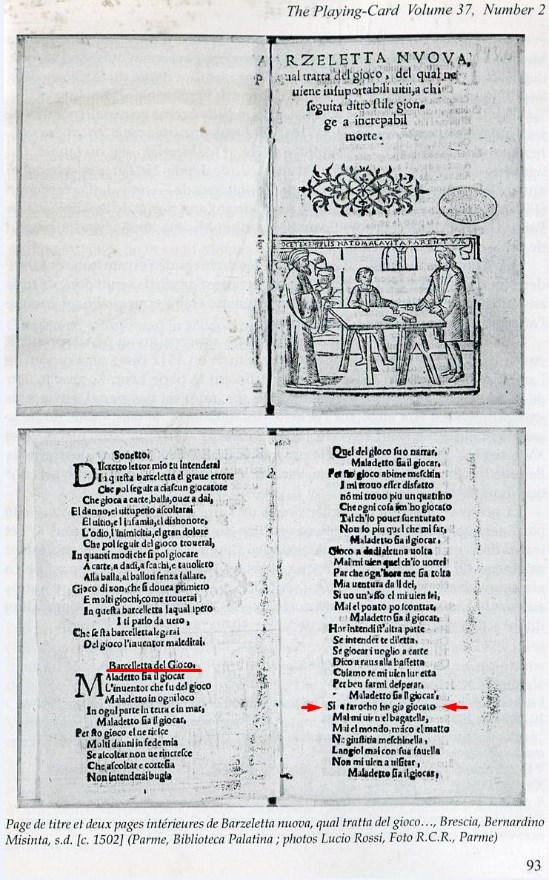 Kopp stated in 1986 the point, that a suggested oldest report about the Keyserspiel in Switzerland (Zürich 1450, suggested by Schreiber) had been an error and that the new oldest report should be from 1572 by the council of Nidwalden. A general game prohibition was given at May 4, but at September 29 three games were allowed: Tarot/Tarock as "Troggen", Munteren (unknown game) and Kaisern as "keysseren". Kopp adds further notes to the game Kaisern , also to the game Troggen, which is played with Tarot cards. 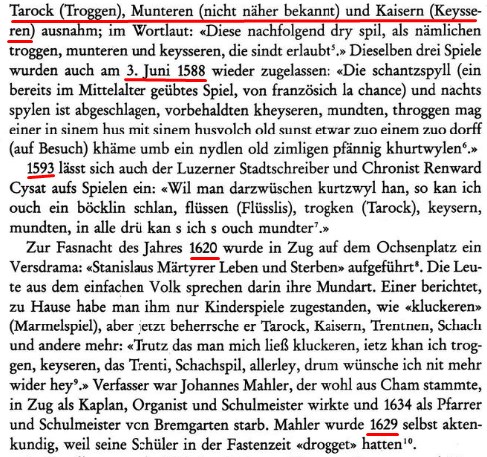 I don't know about more progress by others in the question of the oldest Swiss Kaiserspiel (1986 is rather long ago, easily there might have been some improvement). Some years (2012) ago I detected an old Swiss note about "Nöffel, Keiser, Kartenspiel". I was then interested only in the Karnöffelgame, so I didn't realize its meaning for the Swiss Kaiser game.

The text is a collection of items (fashions and objects), which were new in the past 10 years in the city of Bern. As the text was written in 1503/1504, one can assume, that the Keyserspiel appeared 1493/94 - 1503/04 in Bern, possibly accompanied by the Karnöffel. Or both appeared independently.

"Nöffel" (Karnöffel) and "Keiser" (otherwise Kaisern, Keyzerspiel) are noted as new games in Bern in the last 10 years. Dryschlahen is another old game. "Troggen" or another old name of Tarot isn't mentioned.
Karnöffel and Keiserspiel are taken by Geiler von Kaisersberg as the same game (1496), in Bern 1502 they are considered as the same game. 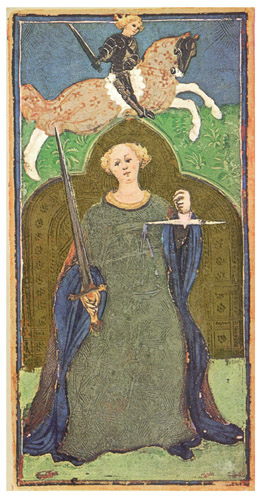 I stumbled about the 2 following pictures, from which one might have some relation to the phenomena "Justice as Fame (with knight in the background)", which had appeared in PMB-1 with its 14 pictures. 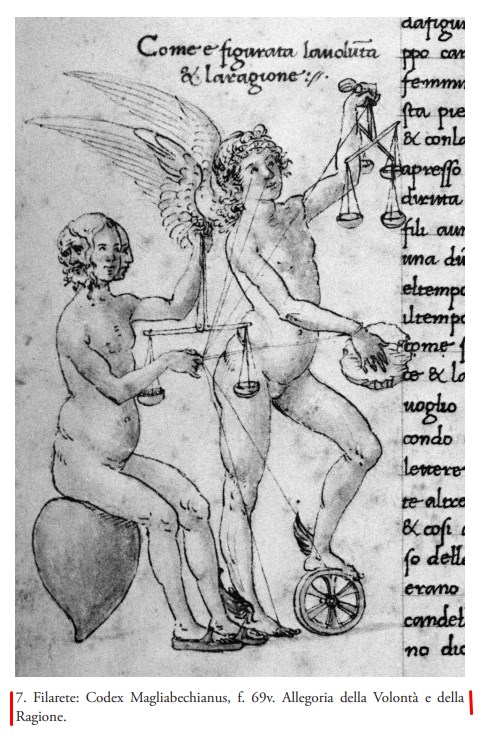 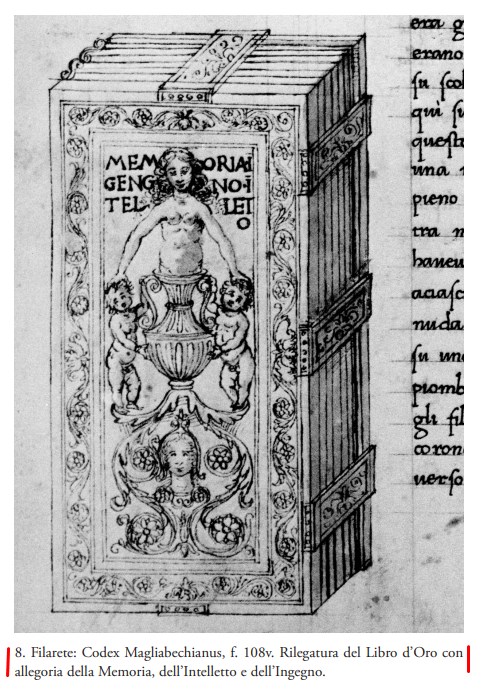 According this the head of the left figure has a lot of eyes (what one discovers not, when looking at the picture).

Wikipedia gives some basic info to Filarete and Sforzinda ...

The ideal city Sforzinda had 8 corners ... 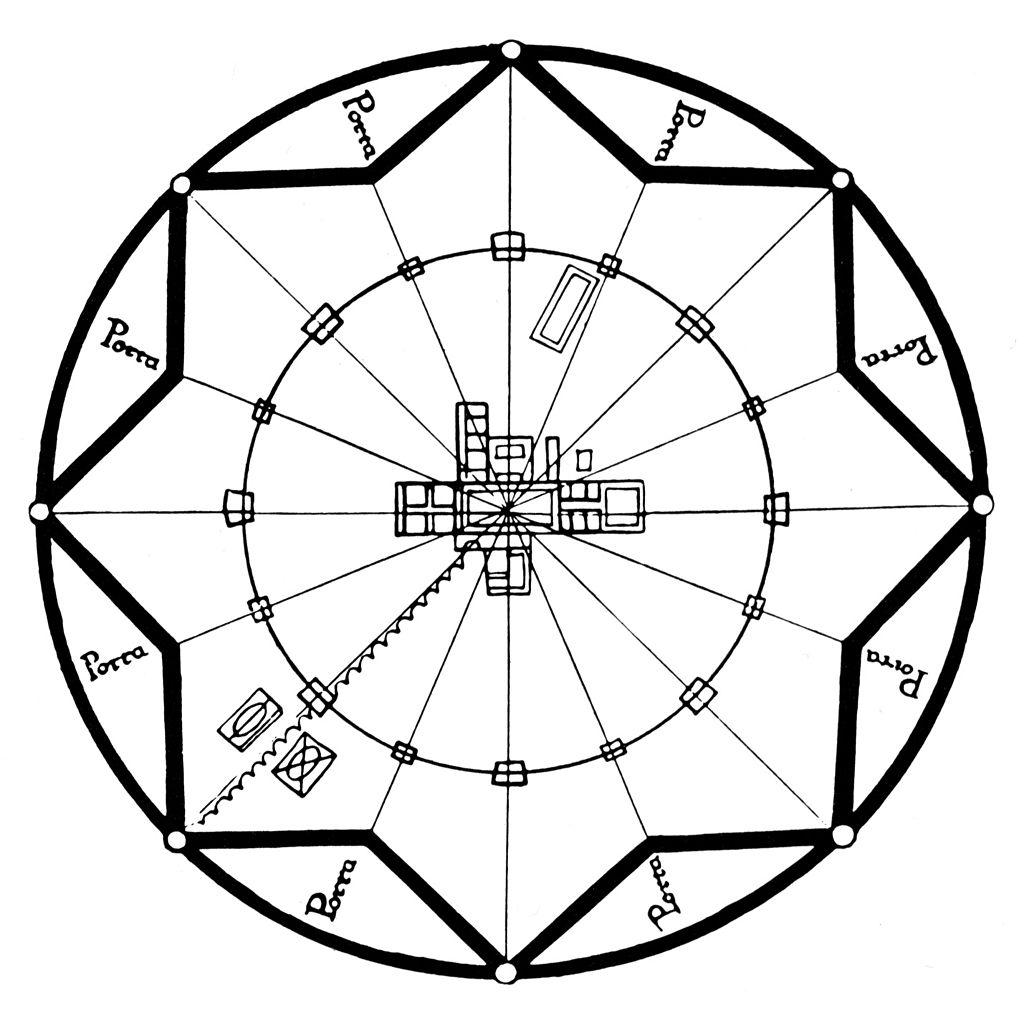 3 double scales are on the picture with the 2 allegories, somehow presenting 2^3 = 8. In the later Milanese Tarot development the motif "Justice" was connected to the number 8.
Huck
http://trionfi.com

Users browsing this forum: No registered users and 39 guests