#101 by Huck
A somehow intensive publication appeared 2009 in German language, a dissertation by Ulrike Wörner with 457 pages from the row
Regensburger Schriften zur Volkskunde - vergleichenden Kulturwissenschaft by the Regensburger Verein für Volkskunde

The title is: "Die Dame im Spiel" (The Lady in the Game) with the subtitle "Spielkarten als Indikatoren des Wandels von Geschlechterbildern und Geschlechterverhältnissen an der Schwelle zur Neuzeit" (Playing Cards as indicators of change in gender pictures and gender relations at the swell of modern age). 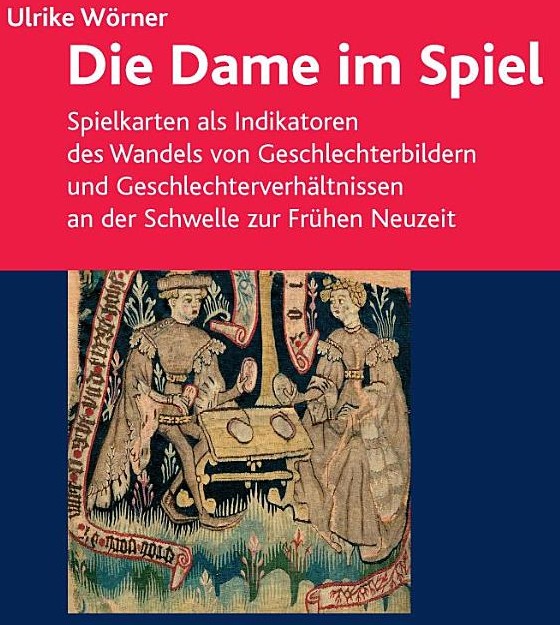 The title picture looks, as if a man and a woman play with rounded cards, as they are known from the Burgundian deck from ca. 1470, now in a New York library. The wall carpet is given the title "Wandteppich der thronenden Minne" and it is dated 1410-20, which would mean, that such rounded cards already existed in this early time. The picture is new to me and I don't know, where it comes from (Burgundy ?).

Well, the preview is not extended enough to say, how good the book really is, but actually it can't be called bad - I meet enough details, which I don't know, mostly not surprises, but anyway, that are good signs. The major theme is 15th century and playing cards ... so just our theme and time. But definitely it's not, what we ourselves do, somehow the gender problem interferes too often.

This picture I found: 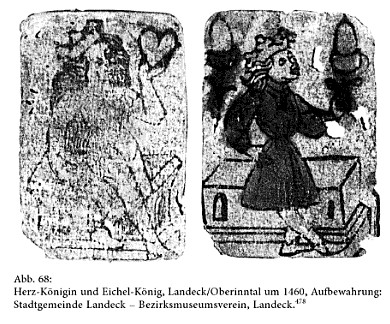 ... these are the Landeck cards, from which 7 have been found together with combs and needles in an old house in Fliess in the Oberinntal. Now they are in a Heimatmuseum in Landeck. They are dated ca. 1460.

The author had studied history and German language and literature, the dissertation was finished in the proud age of 64.
Huck
http://trionfi.com 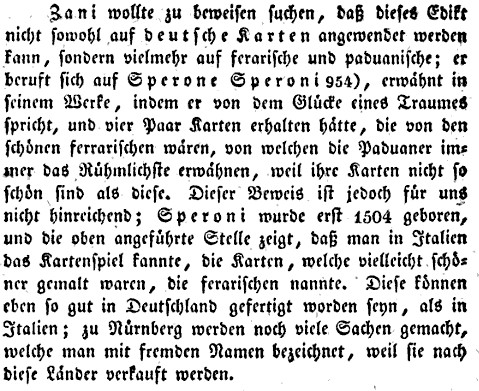 It tells, that Sperone Speroni expressed the opinion, that the Ferrarese playing cards would be nicer than those from Padova. The statement should be from "after 1537".

#103 by Huck
We got the somehow "private" information, that a request to the British library ended with the not totally satisfying result, that the picture ...

Kaplan I notes the picture at p. 31 and states "was written in the latter half of 14th century" and "we don't know, if the picture postdates the writing of the manuscript". Kaplan speaks of a print, and refers to Singer in 1816 ... but Singer did speak of an illumination and had made a print of it. 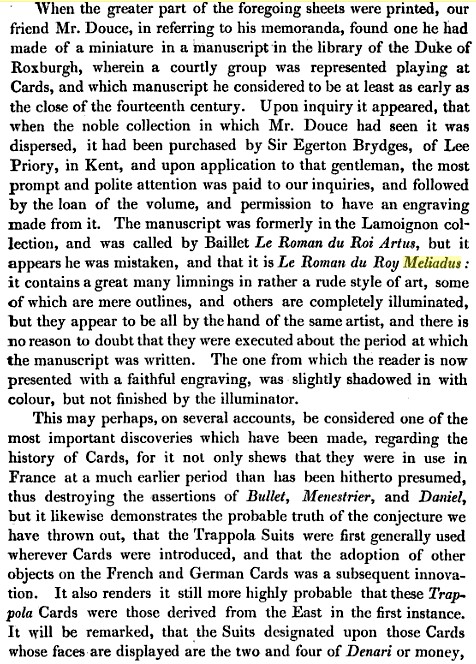 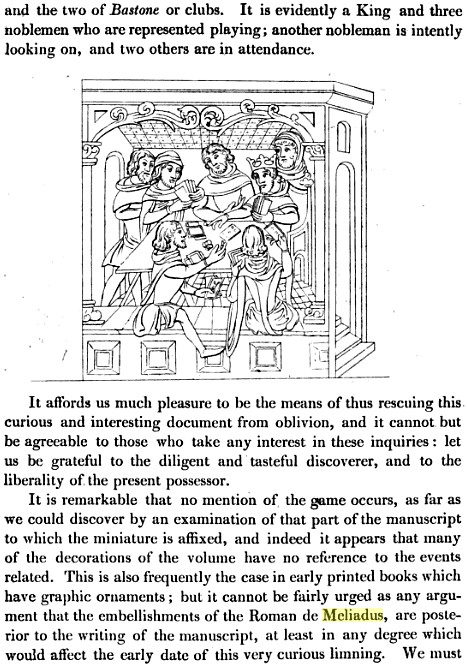 It seems, that the object of Singer and British library is the same.

Well, if this develops to an accepted date, we're not very far from the dates indicated by Hübsch in 1849 in his book about Bohemian trade.

#104 by Ross G. R. Caldwell
1362, or shortly afterward, is consistent with the dating of "between 1360-1365" (Depaulis), for the introduction of cards into Europe. In any case, it appears to be the earliest known depiction of card-players in Europe.

Singer didn't know it was Neapolitan, I guess, so his remarks about France are wrong.

The website definitely writes "Louis II. of Naples" ... who is this?

In 1352, there's a Louis I of Naples, who is titular king of Naples, but likely not really. ... He was 13 years in 1352 and lived somehow in "Anjou", I assume, likely somehow France today.
Is this Meliardus youth literature? Did Louis visit Naples? I think, there reigned then a Johanna.


On the death in 1343 of her grandfather, Robert of Naples, his will provided that Andrew should be crowned King of Naples in his own right as well as Joan's, Robert having displaced Andrew's father, Charles Robert, from the Neapolitan throne. The 16-year-old Joan resisted this provision of the will with the support of the Neapolitan nobility, and the resulting turmoil resulted in the intervention of Pope Clement VI, as the feudal overlord of the Kingdom. He sent Cardinal Americ of St. Martin to annul Robert's will and take temporary control of the Kingdom of Naples. The Cardinal crowned Joan alone as Queen of Naples at Santa Chiara in Rome in August 1344. After the assassination of Andrew in 1345 (under her own orders), Joan married three more times: with Louis of Taranto, with James IV of Majorca and Prince of Achaea and with Otto, Duke of Brunswick-Grubenhagen.

Her one son by Andrew died at a young age, and her two daughters by Louis also died young.

Her reign was marked by violent political struggles among the members of the Angevin house. The assassination of Andrew brought about the enmity of King Louis I of Hungary and his invasion of Naples. Joan was forced for a period to flee to Avignon and to pay for her return to her kingdom by selling her rights over that city to Pope Clement VI; after several reverses of fortune, both Joan and Louis agreed to the papal request for a truce. The matter was to be solved by a new trial over Andrew's assassination, to be held in Avignon. Joan was acquitted of all charges, and she could return.

There are two other persons named Louis, and one is mentioned in context to 1353, which is rather near to 1352, so something had happened then.

This is the life of Louis of Taranto:

Louis (1320[1] – 26 May 1362), of the House of Anjou, was the Prince of Taranto from 1346 and King of Naples from 1352. He was a son of Philip I of Taranto and Catherine II of Valois, Princess of Achaea. His paternal grandparents were Charles II of Naples and Maria of Hungary. His maternal grandparents were Charles of Valois and his second wife, Catherine I of Courtenay.

In 1342, Louis became Grand Master of the Order of the Holy Sepulchre, one of the oldest and most prestigious military orders of Christendom. In 1346, his elder brother Robert became the titular Latin Emperor. Louis was invested with Taranto.

On 20 August 1346, Louis married his cousin, the queen of Naples, Joan I, in Naples, becoming her second husband and the only of her husbands to be accorded the title of king. He was crowned King of Naples in 1352 (or perhaps 1353).

In 1360, as king, Louis invaded Sicily, in support of the insurrection against Frederick III the Simple. In 1361, Louis and Joan had to flee Naples for Gaeta to escape the armies of Louis I of Hungary. When Louis died, no husband of Joan was ever crowned king after him and Taranto passed to his younger brother Philip II.

Louis of Taranto, King of Naples, is missing at the other list, which linked above. He indeed reigned between 1352 - 1362, which correlates to the dates given by British library.

So there should be a dedication to a (living) Louis (of Taranto) in the book, which is responsible for the dating.

It's a little unclear, who is Louis I in this case. Louis I of Anjou (13 years in 1352) can't have been it, cause he became titular king in 1382. Maybe there was a further Louis in all this confusion about Johanna I, Louis the Great from Hungary, who for some time might have called himself also Louis, king of Naples, before he traded the arrangement with Johanna.

#106 by Ross G. R. Caldwell
We'll have to find out more about the manuscript then.

Here is the full description from the British Library website -
http://www.bl.uk/catalogues/manuscripts ... ighlight=F

"LE, ROMAN du Roi Meliadus de Leonnoys, par Helie de Borron. Writ-
ten for Louis II., titular King, of Naples, (whose portrait is often in-
troduced in the volume,) between the years 1352-1362, and illus-
trated by upwards of three hundred and fifty miniatures, the greater
portion of which are by a contemporary hand, but others have been
added at a later period by inferior artists. On vellum. Folio. From
the Lamoignon and Roxburgh Libraries. [12,228.]"

They don't say why it is asserted to be Italian. Perhaps the "inferior" later artists are what have given rise to doubts about the date of the picture. We'll have to see more. My guess is that the clothing alone puts it before 1380 (none of them are wearing "poulaines", for instance).

I can't figure out why he is called "Louis II" either, but given the dates it would appear he is Louis of Taranto, of the House of Anjou. If so, it would explain why it is considered an Italian manuscript, since all of Louis' activity was in Italy.
http://en.wikipedia.org/wiki/Louis,_Prince_of_Taranto

#107 by Ross G. R. Caldwell
Here is another picture of him (?) from the same manuscript (I assume he is also the King in the card-playing scene) - 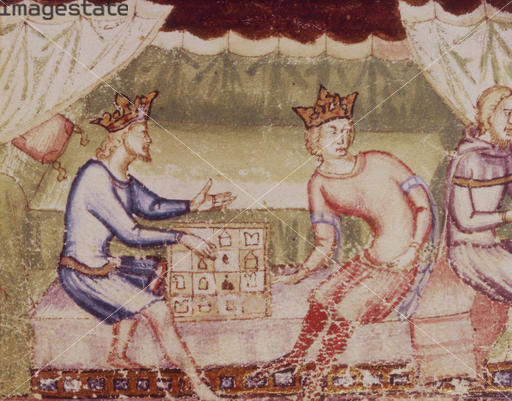 This is perhaps the "better" artist.

#108 by Huck
I would assume, that there's a background like Louis of Hungary conquered Naples to avenge nephew or cousin Andrew (Johanna's first husband), declared himself king of Naples, but abdicated as king of Naples, cause negotiations with Johanna brought a somehow satisfying result. So - somehow - he was Louis I and the husband of Johanna then Louis II.

I remember to have read a longer article about Johanna I (much more than the Wikipedia article) long ago, and the political maneuvers were considerable and rather complicated. A long difficult story. Not too forget, that this was all around the plague of 1348-50 and for the long list of the kings of Naples both Louis simply were forgotten. ... history even hasn't a precise date for crowning of this Louis II of Naples (1352 OR 1353), usually a clear sign, that something is recorded not very satisfying).

But anyway, a look at the manuscript wouldn't hurt.

... hm, the second picture actually shows two kings and possibly some other players outside of the detail-scene.
Huck
http://trionfi.com

#109 by Huck
As far I get it, Helie de Boron claims to be a nephew of Robert de Boron (which is not naturally accepted). Meliadus is the (late) father of Tristan (who earlier - in other literature - had other parents). The story belongs to the grail stories. Helie de Boron claims to translate from Latin to French ... so the text should be written in French.

Louis of Taronto (and his father) had a lot of titles (for instance titular emperor of Constantinople), which connected Louis to the crusader legends.
Huck
http://trionfi.com Preparation of tournament, too big to display here.

Knights attack sleeping men, between them a king.

Well, the British library sits on these pictures. Stupid politic.
Maybe not all pictures are illuminated with colors?
Let's do something more interesting.
Huck
http://trionfi.com